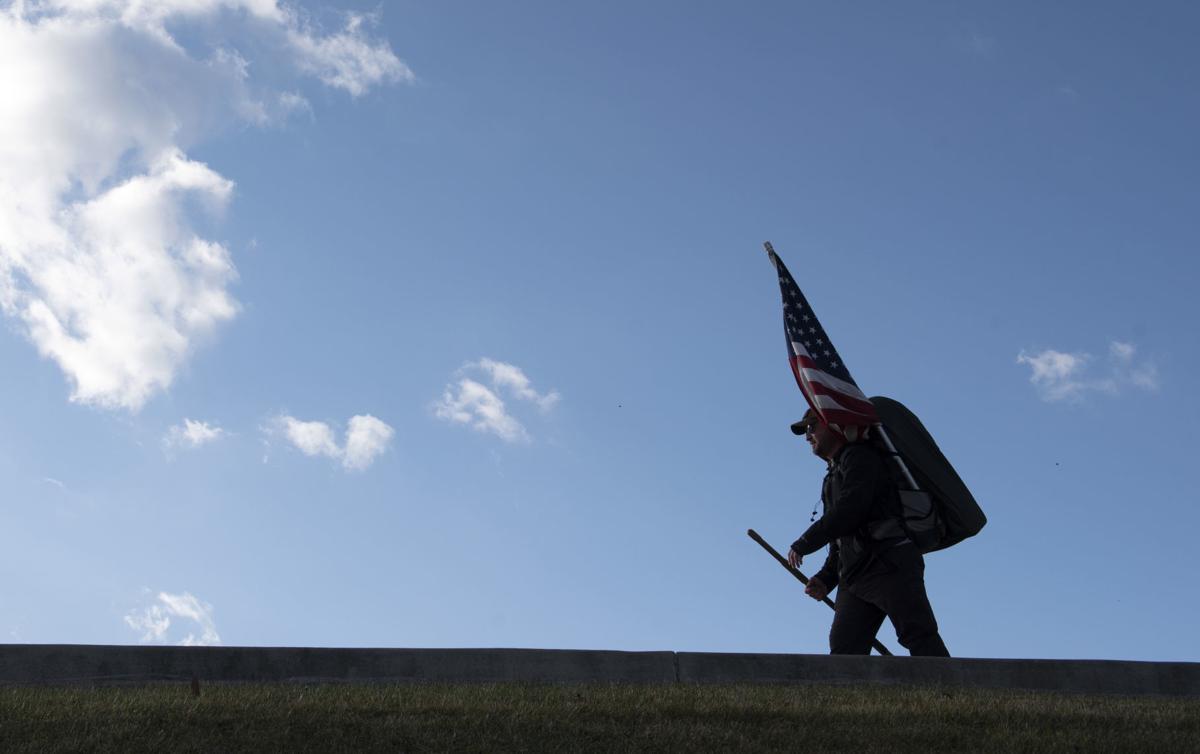 Justin Kuhel, who served in the U.S. Marines from 2006 to 2010 and deployed to both Iraq and Afghanistan, walks along U.S. 40 in Frederick Wednesday during a walk from Columbus, Ohio to Arlington, Virginia in an effort to raise money for fellow veterans. 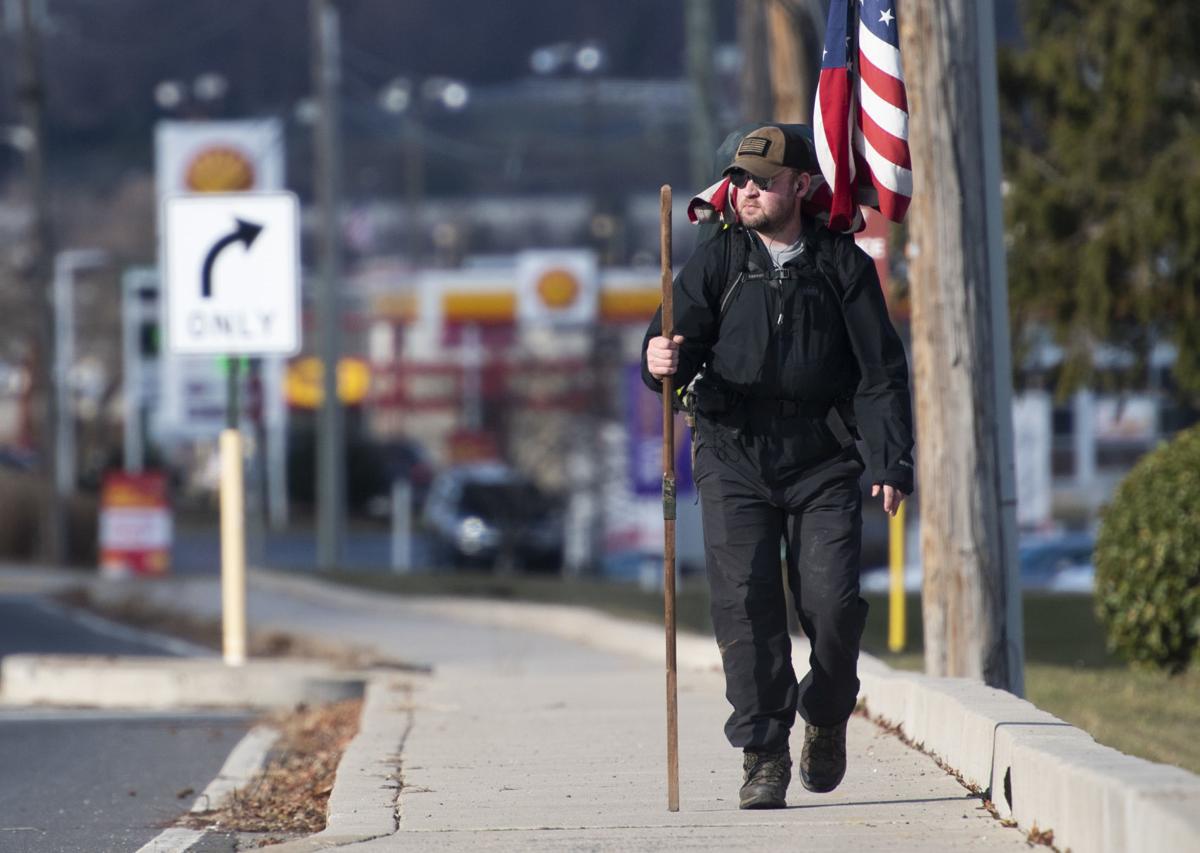 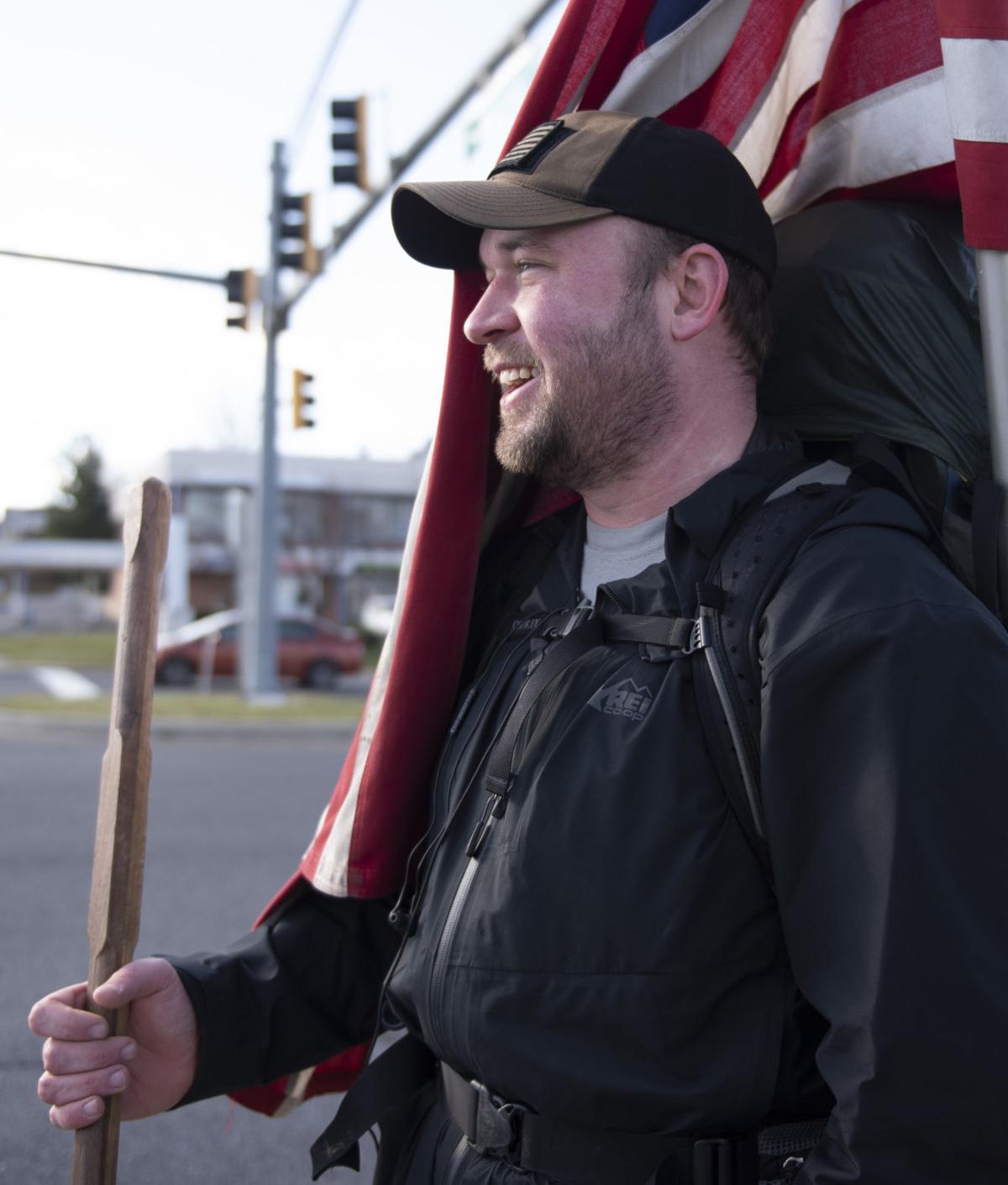 Justin Kuhel, who served in the U.S. Marines from 2006 to 2010 and deployed to both Iraq and Afghanistan, passed through Frederick Wednesday during a walk from Columbu, Ohio to Arlington, Virginia. Here, Kuhl waits makes his way along U.S. 40 Wednesday morning.

Justin Kuhel, who served in the U.S. Marines from 2006 to 2010 and deployed to both Iraq and Afghanistan, walks along U.S. 40 in Frederick Wednesday during a walk from Columbus, Ohio to Arlington, Virginia in an effort to raise money for fellow veterans.

Justin Kuhel, who served in the U.S. Marines from 2006 to 2010 and deployed to both Iraq and Afghanistan, passed through Frederick Wednesday during a walk from Columbu, Ohio to Arlington, Virginia. Here, Kuhl waits makes his way along U.S. 40 Wednesday morning.

Justin Kuhel is no stranger to walking long distances, having served in the Marines from 2006 to 2010 with deployments to both Iraq and Afghanistan. Now, he chooses to walk to raise money for fellow veterans.

“I was a grunt, so if we’re good at one thing, it’s walking,” Kuhel said. “And it seemed like the natural thing to do.”

Kuhel embarked on his third long distance walk on Dec. 14, leaving from his home in Columbus, Ohio and walking toward Arlington, Virginia. He stopped in Frederick on New Year’s Eve, staying in his tent at Mountain Motors on Route 40 for the night. He headed out in the morning, walking toward Route 355.

His goal is to raise $20,000, which will go toward two charities, Help Our Military Heroes, which builds vans to accommodate severely wounded soldiers, and Save A Warrior, which helps veterans access mental health care.

If he doesn’t raise the money by the time he reaches Arlington on Friday, he is prepared to turn around and begin walking home in hopes of raising the money before he gets back to Columbus. If he does raise the money in time, he will head back home with his family, who will be waiting for him in Virginia.

“I’m prepared to do whatever it takes to raise the money,” Kuhel said.

He would prefer to go home, though — his last semester of college at the Ohio State University begins on Jan. 6. He’ll graduate in the summer with a degree in public policy.

“Everybody’s really been supportive, so if we can keep up this pace I think we can actually get it by Friday,” Kuhel said. “But like I said, if we don’t, I’m fully prepared to see this through and continue walking.”

Many people donate to Kuhel directly when they see him walking alongside the road with his hiking pack and large American flag, which he has carried with him since his first walk. After he arrives in Arlington, it will have been with him for 3500 miles since 2012.

But anybody who wishes to donate can do so by going to the March for Our Vets Facebook page and clicking “Learn More.”

Kuhel began his long distance walks in 2012, after he watched the documentary “Hell and Back Again,” about a wounded marine’s recovery upon returning home. Kuhel’s sniper team was attached to the marine’s company, and Kuhel was actually on patrol with him when the marine was shot.

“This documentary really just spoke to me I guess, and I wanted to do something to help out,” Kuhel said.

He did his first walk from Columbus to Arlington that year. Two years later, he walked from North Carolina to California, spending five months and 120 days of walking to do so. He raised over $100,000.

He did that walk during the summer, which he prefers over walking through the winter. However, he figured that his last winter break of college would be one of the last chances he would get to take off for a few weeks and walk.

He’s been setting up his tents at businesses and firehouses for the last couple of weeks. While he walks, he usually listens to an audio book or music.

“A couple hours a day I like to take the headphones out and be in the moment and enjoy the walking and all that,” he said.

It also gives him an opportunity to talk to the people who pass him, who often want to help out his cause and hear his story.

“That’s the best part,” Kuhel said. “Is meeting all these new people who are excited about helping out veterans.”