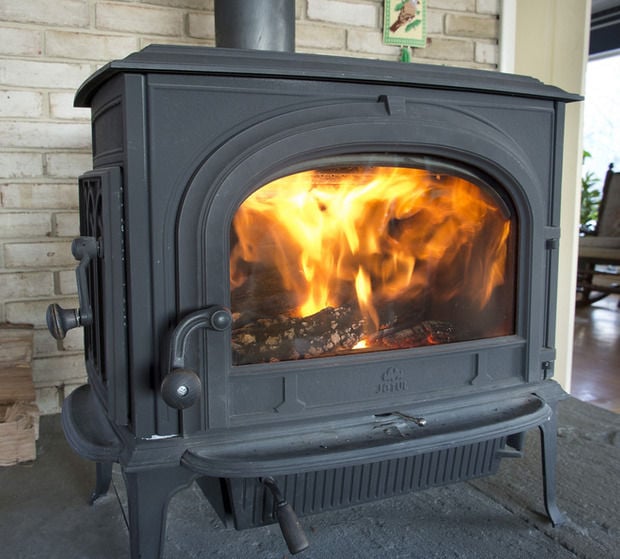 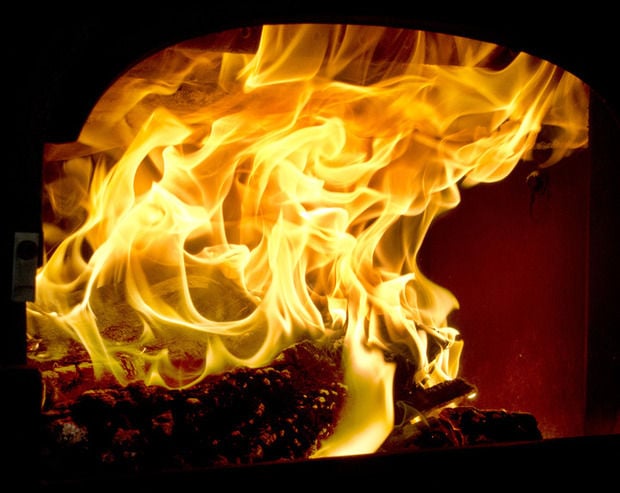 Flames roll after Hal Noer stoked the fire in the wood stove he uses to heat his Braddock Heights home. Staff photo by Sam Yu 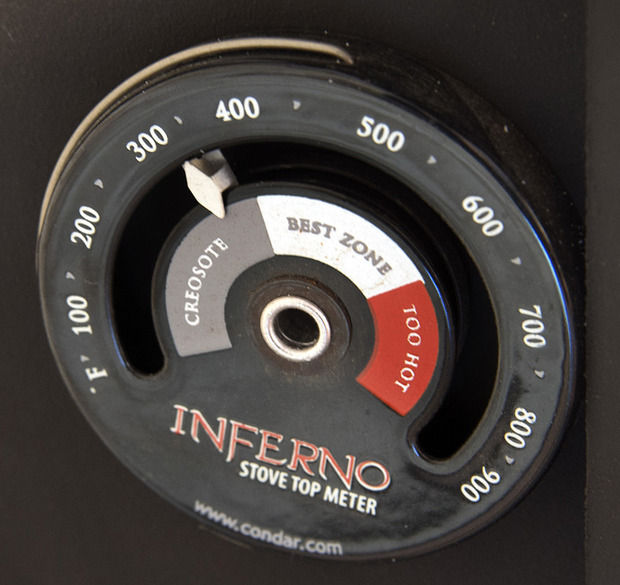 A thermometer on the back of Hal Noer's wood stove helps him know how to adjust the fire. Staff photo by Sam Yu 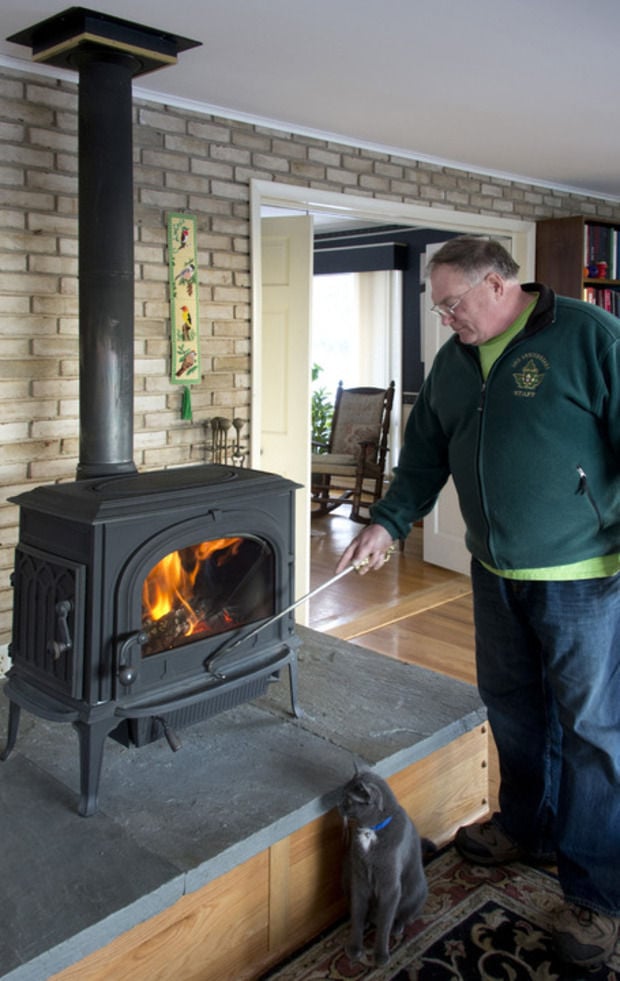 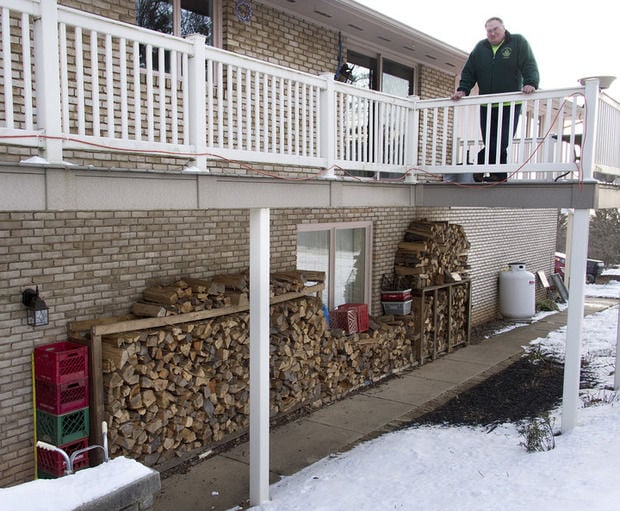 In back of Hal Noer's Braddock Heights home is two cords of wood that is enough to heat his home this winter. Staff photo by Sam Yu 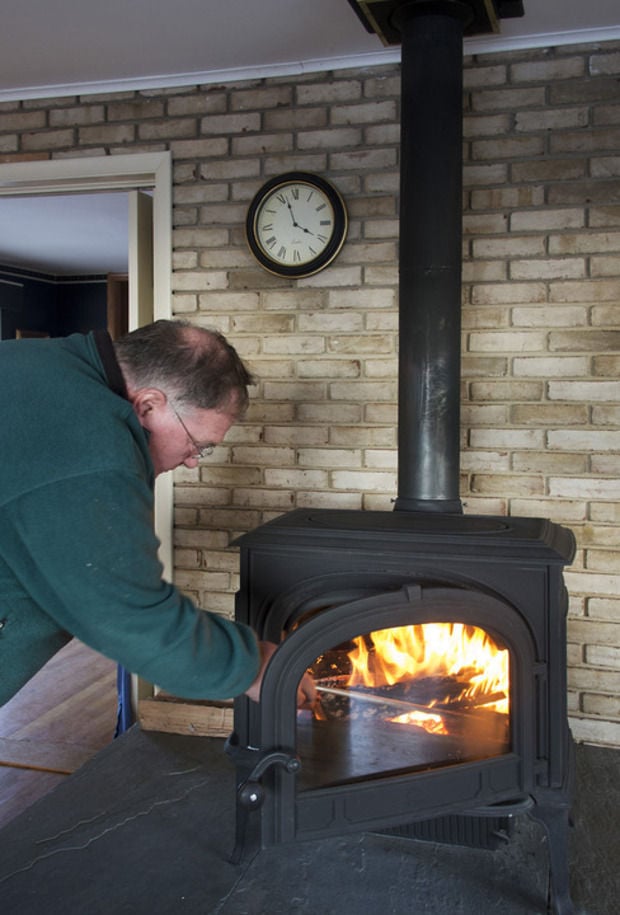 Flames roll after Hal Noer stoked the fire in the wood stove he uses to heat his Braddock Heights home. Staff photo by Sam Yu

A thermometer on the back of Hal Noer's wood stove helps him know how to adjust the fire. Staff photo by Sam Yu

In back of Hal Noer's Braddock Heights home is two cords of wood that is enough to heat his home this winter. Staff photo by Sam Yu

Jonathan Kays feels the millions of dollars spent on solar and geothermal systems would be better spent on wood heat.  “Wood is renewable, clean and much different than it was years ago,” said Kays, natural resource extension specialist and extention forester for the University of Maryland’s Extension Service.

Kays has been working with the Maryland Energy Administration and Maryland Wood Energy Coalition to promote clean wood energy in the state. Although his focus has been on residential use, Kays sees wood heat as a good alternative for commercial use or institutional such as schools.

Kays has done workshops on both wood and pellet stoves, noting that while wood may be a little dirtier, both are good alternatives to fossil fuel or electric heating.

The number of homeowners using wood for heat rose 33 percent from 2000 to 2010, Kays said. Besides the savings, one also gets the ambiance of wood heat, Kays said.

Kays noted that for geothermal or solar heating systems, the upfront cost for a resident can be $30,000 or $40,000. “You may want to think of wood heating and put that money into the house instead,” Kays said.

Today’s stoves are more efficient, less emissions and good for the environment, Kay said. “Many stoves can pay for themselves in two or three years, compared to oil or propane heat,” Kays said.

It may not be for everybody, Kays said, but should be looked at by more homeowners. One of the things to watch out for, Kays said, is ensuring that the wood one buys has been seasoned six to nine months.

One of the challenges for the wood stove industry is balancing production with demand, said Ed Bodmer of Bodmer’s Stoves and Pottery in Buckeystown.

Bodmer, who has been in business 38 years, said three major incidents caused a spike in the demand for wood stoves.

“First was the 1978 oil embargo, we couldn’t get enough to meet the demand for stoves; second was Y2K, everyone was concerned that everything would go dark, and Hurricane Katrina, when oil prices doubled,” Bodmer said.

Today, demand remains steady. Bodmer has customers from Frederick and Montgomery counties and Virginia. Some are existing customers who want to replace a 25 or 30 year old stove with a new, more efficient one.

It is hard work, Bodmer said, and one has to plan ahead. There is cutting the wood, splitting, storing, hauling and cleaning the stove. “It isn’t for everyone, but I have a lot of customers who wouldn’t be without their stoves.”

One customer told Bodmer the stove made her house a home. “There was a central place where everyone gathered as a family to talk, do homework, a lot of things,” Bodmer said, “instead of the children going to their rooms and everyone doing something on their own.”

When a potential customer comes in, Bodmer said they talk and, if interested, he will go to their home to see what type of stove they need in size. “You can buy a stove that is too big, or too small, for what you need,” Bodmer said.

He doesn’t install the stoves, but has installers Bodmer considers honest and do quality work.

A former teacher in Montgomery County, when he and his wife moved to the house next to the shop location, the house had no insulation. “We were getting heating oil every two weeks. A friend had wood stove and I purchased one, an Ashley, made in Alabama,” Bodmer said.

Impressed with the wood stove, Bodmer and his wife, Nancy, a potter, bought the 1820s building. It was originally a cooper’s (barrel maker’s) shop. Nancy ran the shop selling her creations and the stoves while Ed continued to teach, helping evenings and weekends until he retired.

Bodmer sells Vermont Castings (made in Vermont); Jotul (made in Norway, inserts made in Maine) and Pacific Energy (made in British Columbia) brands. The stoves sell for $1,000 to $3,000, with the average model going for about $2,500.

“It is a unique business in today’s market, not something you find in a strip center or mall. We specialize in what we do,” Bodmer said. The average lifetime of a wood stove is 20 to 30 years. Old ones are recycled.

“It is still a tough industry, it can be feast or famine, but there there was a strong demand this fall,” Bodmer said.

Hal Noer of Braddock Heights has had a wood stove for about three years and has been very satisfied. “It heats pretty much the whole house,” said Noer, “and it fits well with the house.”

Noer said he has bought two cords a year at around $175 a cord of wood for the stove. “Last year it was a cord and a quarter,” Noer said.

Making sure the fireplace is clean is paramount, Noer said, who has his cleaned each year. “I like looking at a fireplace,” Noer said.

Randy Neal said his mother, Judy, has used a wood stove for more than 30 years.

“My father got it when the oil crisis hit in the mid-’70s. We got a new one two years ago, more efficient. It is an insert that fits in the fireplace,” Neal said.

Comparing the efficiency of the new stove, Neal said it was like comparing an older car to a new one in the use of fuel. “We should have made the change before two years ago,” Neal said.

The house in Middletown uses the wood stove for primary heating, but has baseboard electric heating used sparingly.

“We burn up to four cords of wood in winter, where the old stove used as much as five cords in a winter,” Neal said.