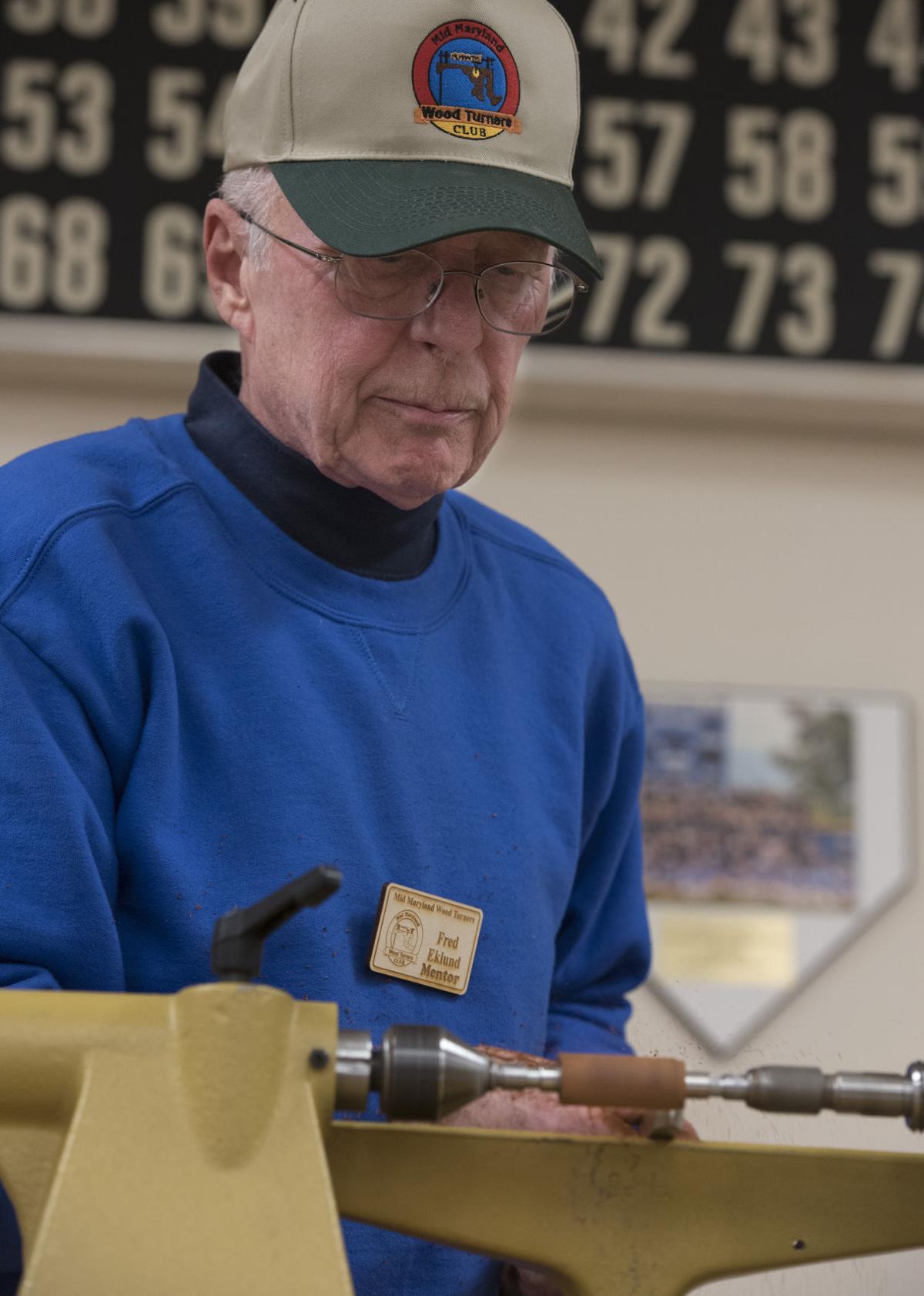 Fred Eklund, a member of the Mid Maryland Wood Turners club, demonstrates creating the grip to a pen during a recent meeting. 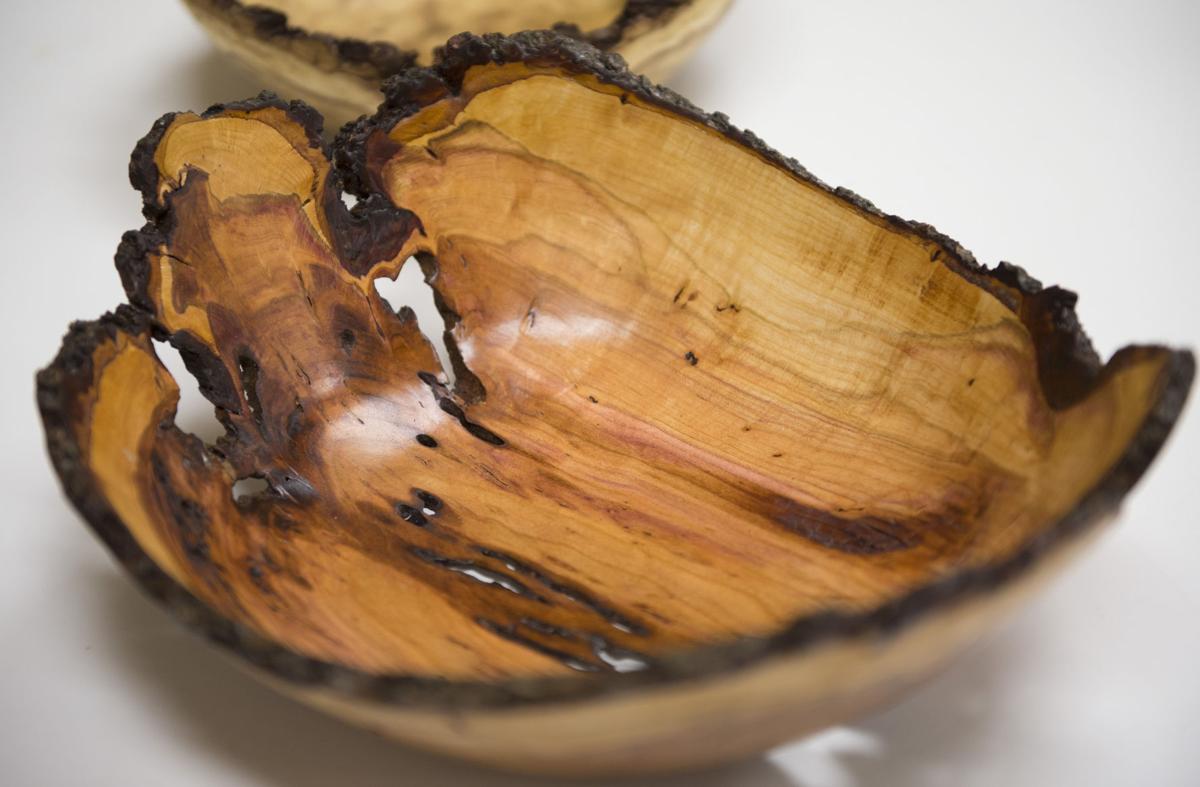 The work of a member of the Mid-Maryland Wood Turners club. 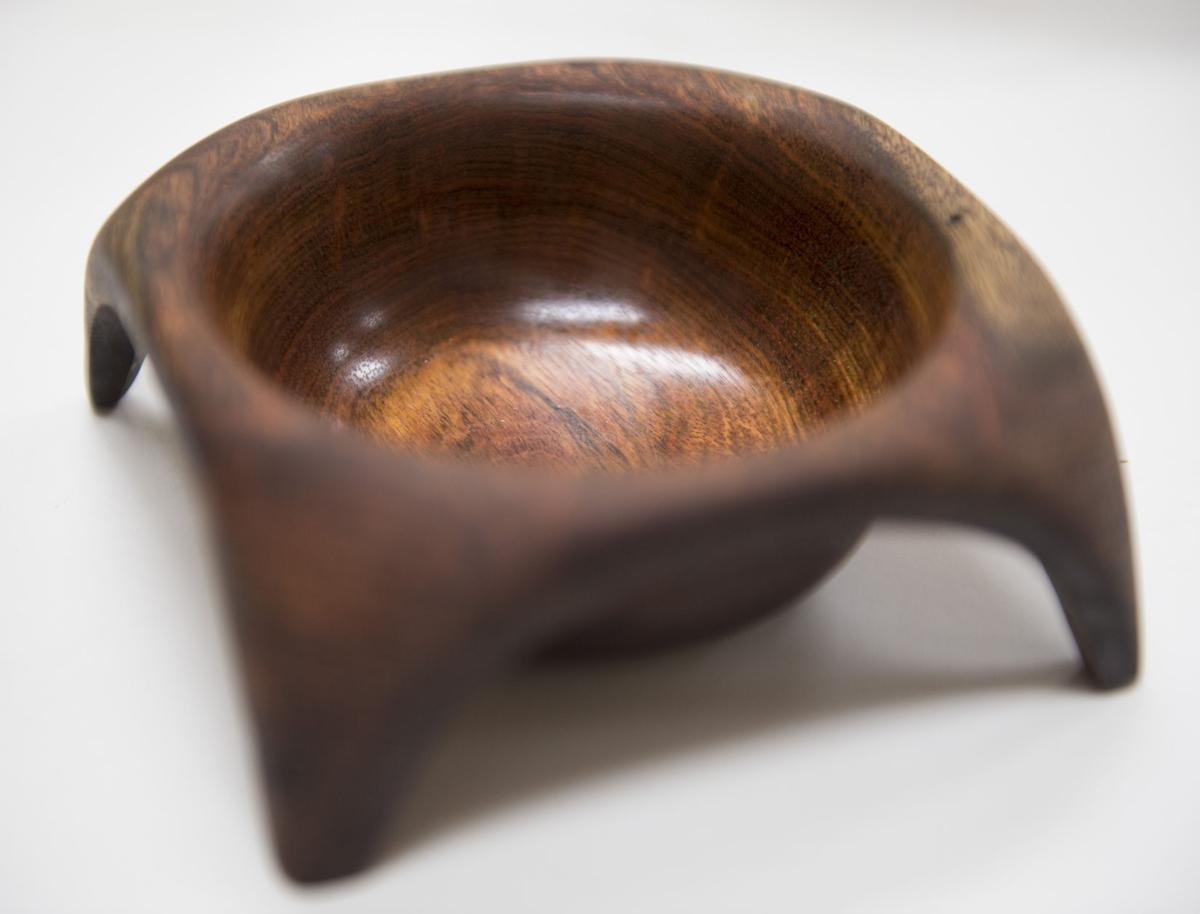 Bowls are a popular item for wood turners to make.

Fred Eklund, a member of the Mid Maryland Wood Turners club, demonstrates creating the grip to a pen during a recent meeting.

The work of a member of the Mid-Maryland Wood Turners club.

Bowls are a popular item for wood turners to make.

The members of the Mid-Maryland Wood Turners Club have the unique ability to take a discarded piece of wood they might find on the road and turn it into a beautiful bowl.

They do it by using a lathe, a machine invented more than 3,000 years ago. The lathe rotates a piece of wood or other material so that it can be carved with a sharp tool into whatever object the woodturner wants to make. Shavings fly out as the woodturner works.

“Woodturning is the fastest-growing aspect of woodworking,” said David DeWitt, who has been in the club since 2007.

The club members make everything from bowls to toys to Christmas ornaments to cups, just to name a few items. Small objects can be crafted in three hours, while larger ones take 20 to 25 hours.

Most of the people in the local club make items out of wood. But they can use anything from stone to deer antlers to acrylic materials.

Club president Dale Biggs once made five pen and pencil sets from a bowling ball.

“My dad was a duckpin bowler,” he said. “When he passed away, I took his bowling ball and made my brothers and sisters pen and pencil sets. I made five of them from the one bowling ball. They are the most unique gifts I’ve ever given.”

Six members of the club sat around a table at the International Association of Fire Fighters local 3666 Union Hall on Yellow Springs Road in Frederick. It’s where they meet the second Wednesday of every month to talk about and demonstrate woodturning.

In back of the table was a large lathe members use at their meetings.

“We have dentists and firemen, but when they come here they are all woodturners,” club member Fred Eklund said.

Most of them do it as a hobby, although some sell what they made.

Most members own their own lathes, which can cost anywhere from $400 to $10,000. Some lathes are small enough to be held in one hand and others are 100 feet long. But they all serve the same purpose, to spin wood so it can be carved with a tool.

Eklund will make hundreds of pieces a year, many of which he sells. He got into it because it helped him deal with the stressful daily commute from his job at Selby Hospital in Washington. “I would get home and woodturning would relieve my stress,” he said.

Once, someone brought him a beam from a barn on the Antietam battlefield. He made 20 pens out of it.

Since he retired five years ago, he continues to do woodworking. He is not only involved in the club, but goes to shows.

Biggs has been in the club for nine years. “I tried carving wood, but then I bought a lathe and fell in love with woodturning,” he said. “It is relatively inexpensive. The wood is free. You find pieces on the road. You can buy wood. When I go on vacation I embarrass my wife when I pick up wood.”

He said if he sees someone cutting down a tree, he might stop and ask if he can have a piece of the wood. Some, although not everyone, will give it to him.

Sherman Reeder is the club treasurer. He has some health problems and woodturning helped him deal with them. “I do it for therapy,” he said. “Someone told me about this and it was best thing for me.”

DeWitt said he remembers doing some woodturning in high school. “I had a good shop teacher and he got me interested in woodturning,” he said. He stopped for many years, but in 2007 he got back into woodturning.

Gene Wahl has been in the club for four years. He found out about it when the club put on its annual demonstration at the the Frederick Festival of Arts. “I didn’t even know they had a club,” he said. “But then I saw the demonstration and thought this was something I would like to do.”

Joe Paluch is the club’s vice president and is one of its newer members. He has always liked to work with wood and bought a lathe in 2007.

At first he didn’t know what to do. “Two years later I met Fred,” he said. “He convinced me to come to a show. He taught me the basics. You go in your basement, turn on the radio, take up a piece of wood and see what you can do with it.”

Eklund said most people start out with a small lathe. Then, as they get better, they will buy a bigger one. He said it’s also important to use a sharp tool. “You make mistakes, but you learn by your mistakes,” Biggs said.

The group meets once a month. Members will spend about a half hour on club business, then have a show and tell where members talk about pieces they have made. A raffle follows, and then a demonstration. Eklund said there are expert woodturners who will come over from Europe and go to various clubs to hold demonstrations.

The club puts on shows to recruit new members. About 10 new people a year typically join.

“Someone will see what we do and get intimidated,” Eklund said. “They say they are not sure they want to do this. We take people under our wing and show them the basics. The first time they see the shavings come off, you can see them start to smile.”

“The first time I saw the sliver of wood come off [while working the lathe], I knew this is what I was looking for,” Paluch said.

“I found out it is nothing but pure pleasure,” he said of woodturning.