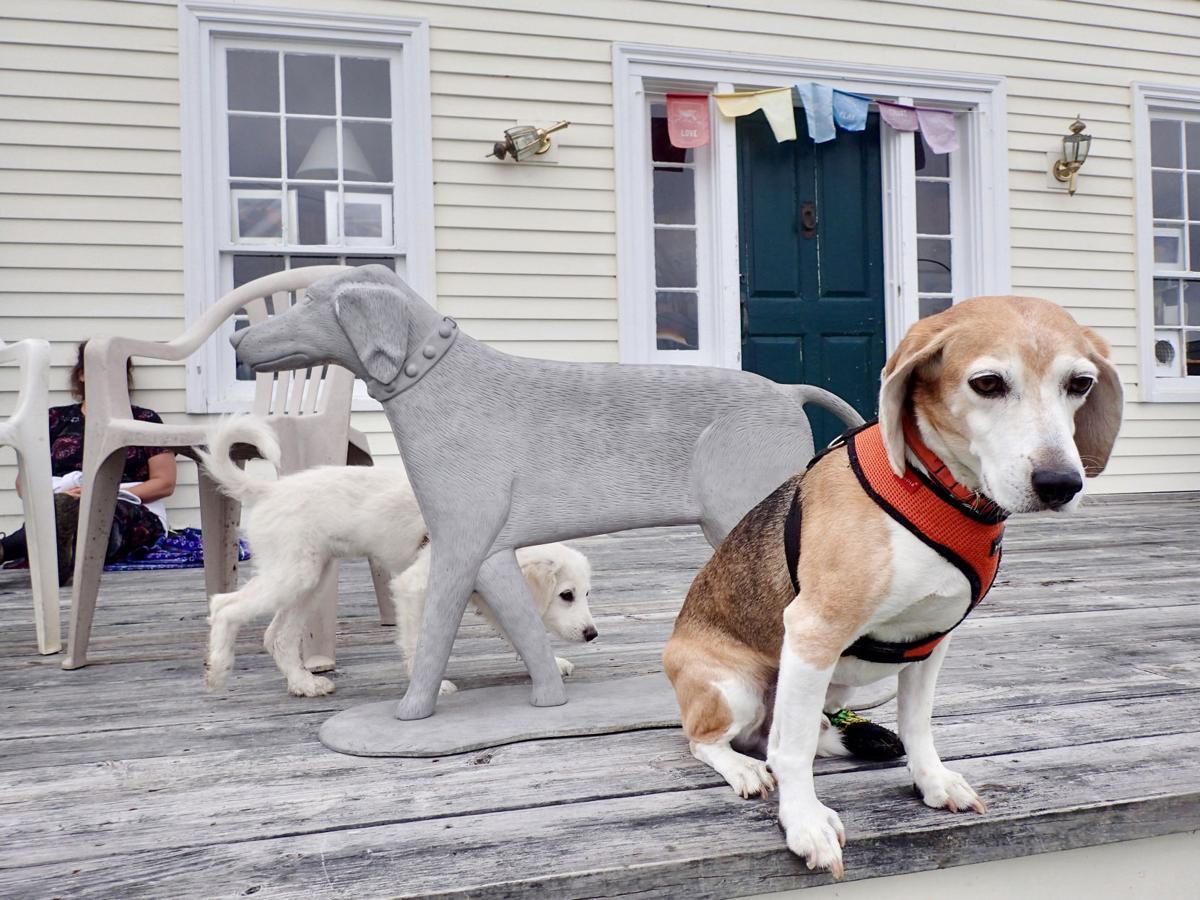 The author’s beagle, Hamilton, waits outside the Stephen Huneck gallery at Dog Mountain while another visitor sniffs one of the sculptures. 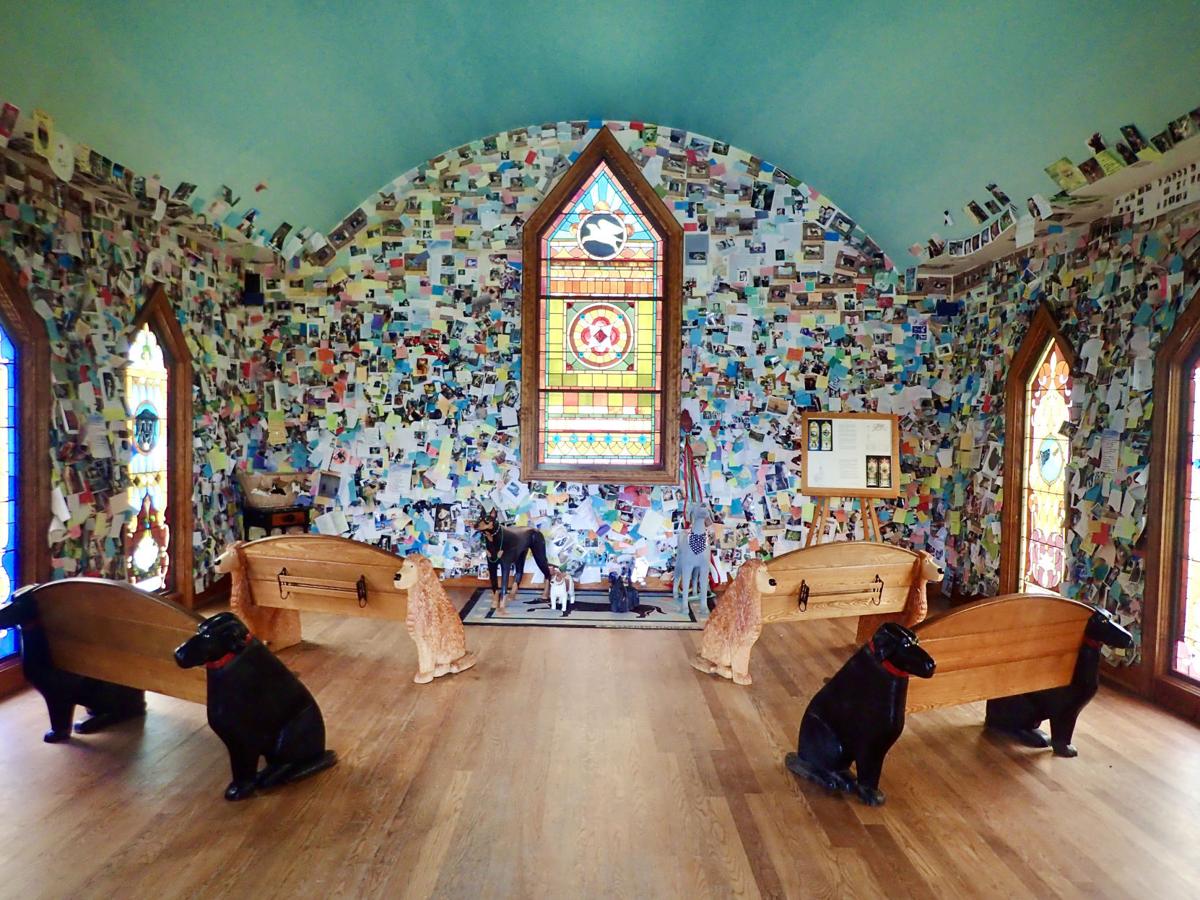 Huneck’s Dog Chapel, which opened in 2000 at Dog Mountain, was designed as a sacred space where humans could sit, contemplate, grieve and celebrate our furry best friends. 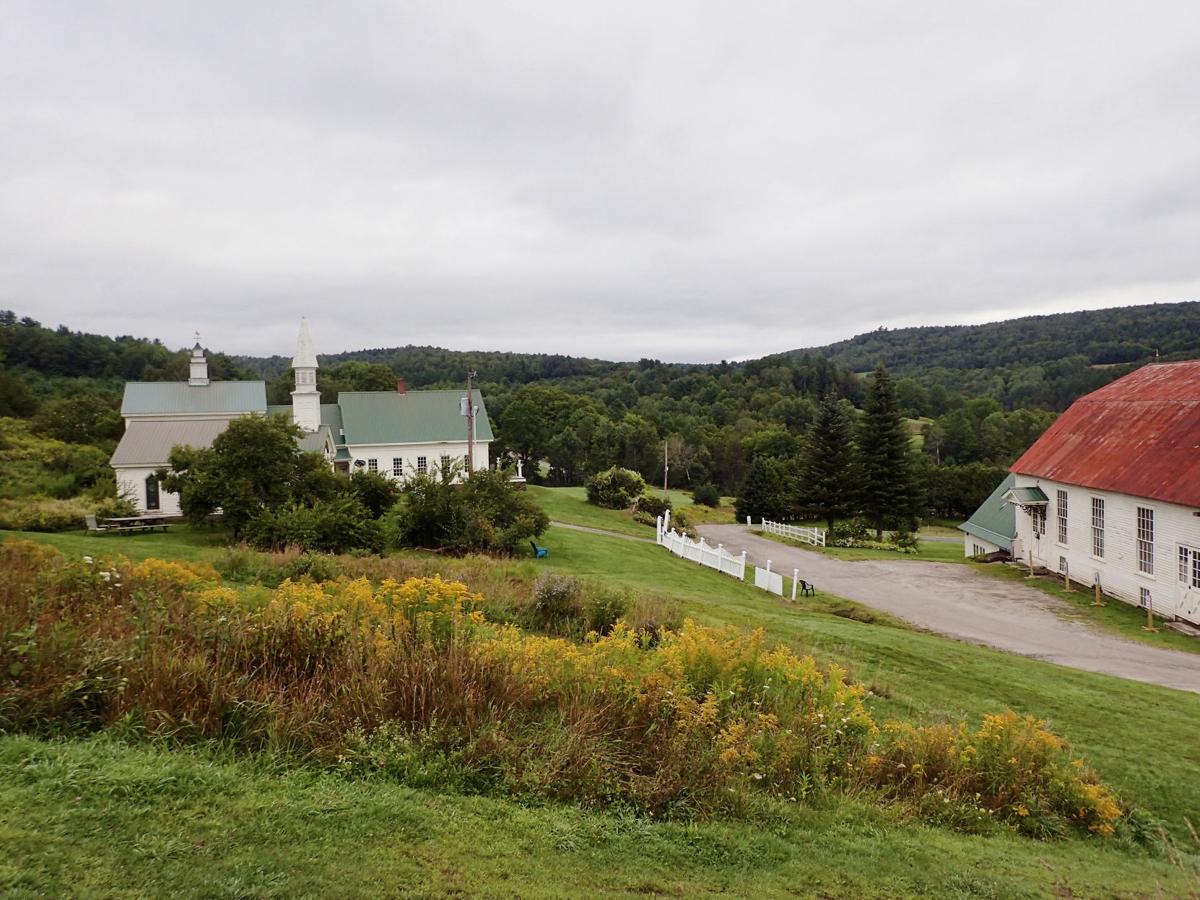 Dog Mountain is set on a 150-acre hilltop in St. Johnsbury, in the scenic Northeast Kingdom of Vermont. 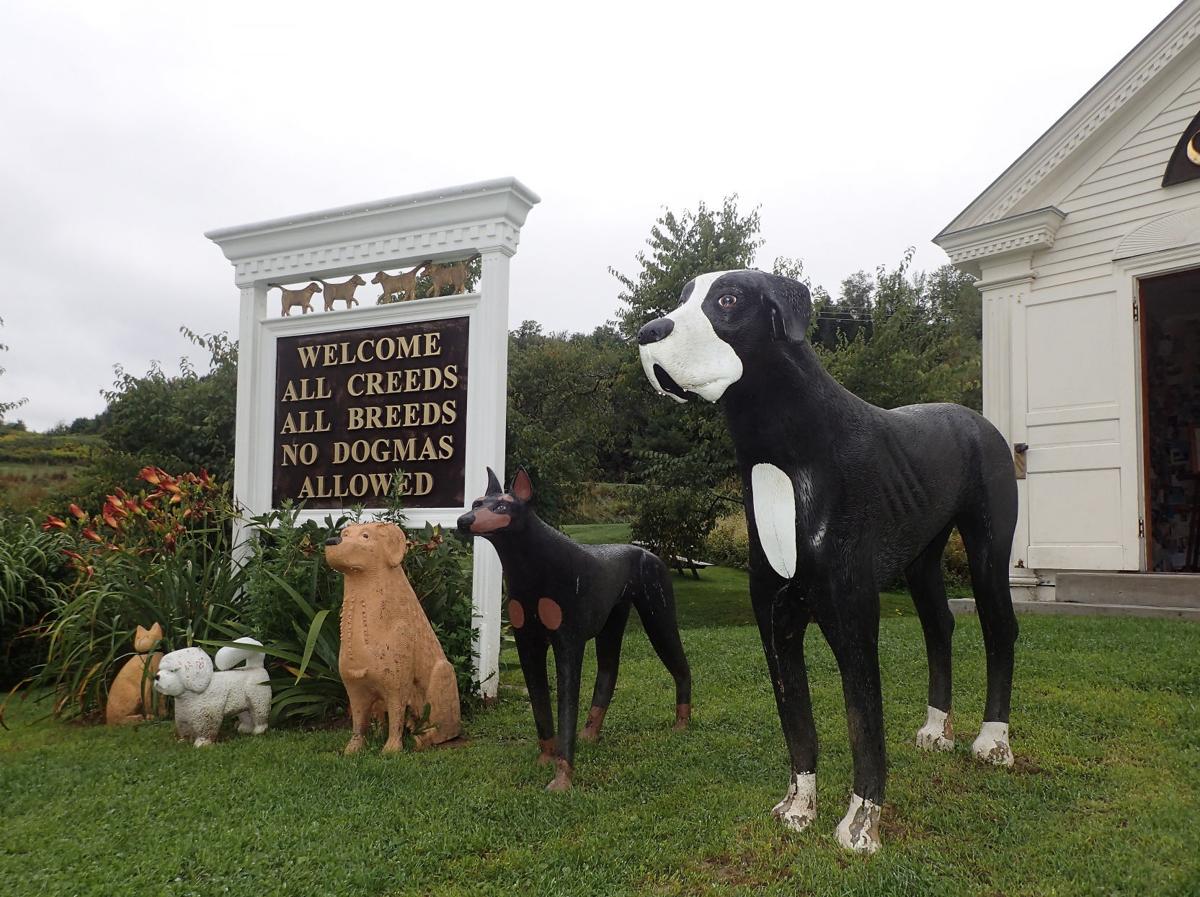 Huneck’s sculptures welcome visitors from across the country to Dog Chapel.

The author’s beagle, Hamilton, waits outside the Stephen Huneck gallery at Dog Mountain while another visitor sniffs one of the sculptures.

Huneck’s Dog Chapel, which opened in 2000 at Dog Mountain, was designed as a sacred space where humans could sit, contemplate, grieve and celebrate our furry best friends.

Dog Mountain is set on a 150-acre hilltop in St. Johnsbury, in the scenic Northeast Kingdom of Vermont.

Huneck’s sculptures welcome visitors from across the country to Dog Chapel.

When people meet Hamilton and ask something uncouth like how long beagles live, my pat reply is, “Forever.”

I know how silly and dismissive that sounds. But it’s less upsetting than recalling the heartbreak and grief I experienced after my beagle Darwin died in 2011 or coming to terms with the near certainty that I will outlive Hammy. I have always thought that dogs — who have figured out, evolutionarily, how to be our perfect companions — should live exactly as long as their humans. Until that happens, their lives will never be long enough.

In the meantime, there’s Dog Mountain.

Set on a 150-acre hilltop in St. Johnsbury, Vermont, Dog Mountain is a celebration of canines — the creation of Stephen Huneck, the folk artist best known for his woodcut prints of playful dogs. Open year-round, dawn to dusk, the mountain attracts tens of thousands of visitors in a typical year, when the destination hosts summer concerts and seasonal dog parties.

Dog Mountain is a leash-optional haven for dogs, scattered with swimming ponds, miles of hiking and snowshoeing trails, and meadows. For humans, the heart and soul is the one-room Dog Chapel that Huneck built as a sacred place where we could honor the dogs who now live only in our memories.

Before I made my pilgrimage to New England with Hammy, I chose a small photo of Darwin to post in the Dog Chapel and gathered pictures of dog friends who had recently died: Rocky, the sensitive and speedy greyhound; Leo, the gregarious golden retriever; Ben, the soulful beagle who was a testing-laboratory mate of Hammy’s; and Peche, the classy Brittany I’d known since puppyhood. When Peche’s human handed me the photo, she had tears in her eyes.

“Put her next to Darwin,” she said, reminding me of Peche’s fondness for smaller friends. “And not next to any big dogs.”

Located an hour east of the state capitol in Montpelier, in the scenic Northeast Kingdom, St. Johnsbury was once a thriving industrial town that has struggled in recent decades. In the 1800s, the Fairbanks brothers moved to town, earning their fortune through the invention and production of the platform scale; they founded a museum, athenaeum and academy, all operating to this day.

Huneck and his wife, Gwen, also an artist, bought the property that became Dog Mountain in 1995. They worked out of an old dairy barn making wood carvings, furniture, sculptures and other whimsical pieces. But shortly after, during a long illness that left him in a coma for two months, Huneck had a near-death experience that led to his vision for the Dog Chapel. Understanding the important role that dogs played in his recovery, he dreamed of a space where we could celebrate the bond we have with our pets and, he later wrote, “help achieve closure and lessen the pain when we lose a beloved dog.”

Struggling to pay medical bills, Huneck eventually scraped together the money to build a chapel in the style of an 1820s Vermont church. The chapel opened in May 2000 with a remembrance wall in the foyer; soon, the wall was filled with photos and notes.

On a chilly August morning in 2019, I drove up a dirt road and pulled into Dog Mountain shortly after sunrise. Hammy — subtle in his affection but transparent in his dislikes — had no interest in leaving the warm car, so I left him covered in a blanket and walked to the Dog Chapel with my envelope of photos.

Outside, a sign read, “Welcome all creeds, all breeds, no dogmas allowed,” and four lifelike dog statues — from pocket- to pony-size — stood nearby. The doorknobs were dog heads, inspired by Huneck’s black Labrador Sally. A gray light had begun to seep through the dog-themed stained glass. Every wall was covered, floor to ceiling, with photographs, drawings and notes eulogizing dogs. I sat in a short pew flanked by carvings of dogs and read from one of Huneck’s books. He wrote that dogs not only bring us closer to nature but help us live in the moment and feel unconditionally loved.

With the space to myself, I walked around and read dozens of love notes on the walls (and in overflow albums), my eyes tearing up as I absorbed the words on Post-its, scraps of paper, Snoopy stationery:

“To Andy — I still expect to see you waiting at the door on the landing when I come home. Thanks for loving us.”

“Tasker, thank you for being my best friend when no one else was. — Dominic.”

At the front of the chapel, I found a narrow spot above the molding and squeezed my photos into the collection, careful to place Peche next to Darwin. As I soaked up the presence of loved dogs surrounding me, a lump burned in my throat. Tears blurred my vision, and I heard a squeaky, whimpering sound so startling that I looked around to see if it could have come from anywhere else but my own throat — then felt utter relief that no one else had heard.

Just then, a free-range labradoodle puppy bounded into the chapel with dewy paws, followed by a young couple. The puppy sniffed the behinds of the dog statues, and I laughed, wiping tears from my cheeks.

Next to the chapel, a renovated farmhouse serves as a gift shop and gallery of Huneck’s art. In the early 2000s, his work was wildly popular, said Scott Buckingham, executive director of Friends of Dog Mountain, the nonprofit that now owns and manages the property. Huneck, who suffered from depression, oversaw a bustling workshop of artists who helped him press woodprints and make resin sculptures from fiberglass molds. When the recession hit, Buckingham said, “the business went from 100 miles an hour to zero,” and Huneck, a beloved visionary not known for his business smarts, had to lay off most of his staff and halt production. In 2010, Huneck tragically took his life, and Gwen did the same in 2013.

In recent years, Friends of Dog Mountain has worked to protect and preserve the property and Huneck’s art, paying outstanding bills and addressing deferred maintenance. Buckingham said there are plans to catalogue and restore Huneck’s wood blocks and molds and to one day offer workshops in woodcut art.

“Steve had an enormous personality,” Buckingham said. “He had this remarkable ability to be humorous but still tender and meaningful, capturing the sentiments that people connect with around their dogs.”

In the gallery, I looked at Huneck’s original, signed woodcut prints and furniture and his children’s books about Sally, including “My Dog’s Brain.” His art is reproduced on pillows, T-shirts, doormats, cards and magnets — dogs with halos, dogs peeking out from under covers, dogs serving as legs of a coffee table, dog heads with antlers. (The office of Patrick Leahy, a U.S. senator from Vermont, is decorated with several Huneck pieces.) I bought the only beagle art in the shop, a giclee of a hound howling in the wee hours of the morning.

As the parking lot filled, I chatted with other visitors — a local who brings her little dogs twice a day, an Alaska transplant visiting with his bulldog, and a family passing through from Stowe, their large dogs wading in the pond. A Rhode Island woman left her nine papillon pups at home because “if you bring one and not others,” she said, “they all get upset.”Finally, I persuaded Hammy to join me in sniffing out the property. He looked askance at the dog statues, and I drank up the green expanse, dotted with splashes of goldenrod.

We drove into town, where we dropped off the beagle print at a frame shop and browsed at Boxcar & Caboose bookshop. After picking up the print, we set off for our next New England destination. Hammy fell into a deep sleep, lifting his head groggily when I stopped for gas.

That night in bed, Hammy curled up next to me as he always does, but for the first time, he rested his white snout across my neck. His whiskers tickled my face, his steady breath landed hot on my skin, and my neck tilted at an awkward angle. But I dared not move. With each of Hammy’s puffs, I smiled, feeling loved by this warm creature and thinking that I could be content in this position, forever.