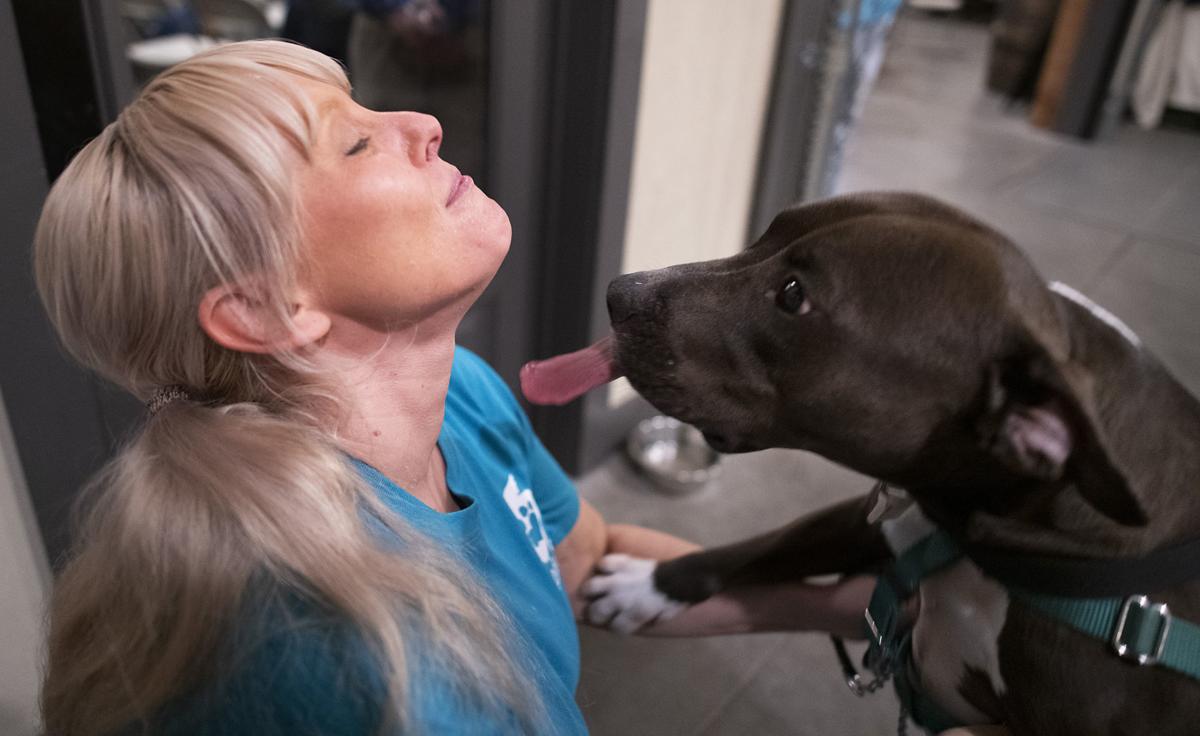 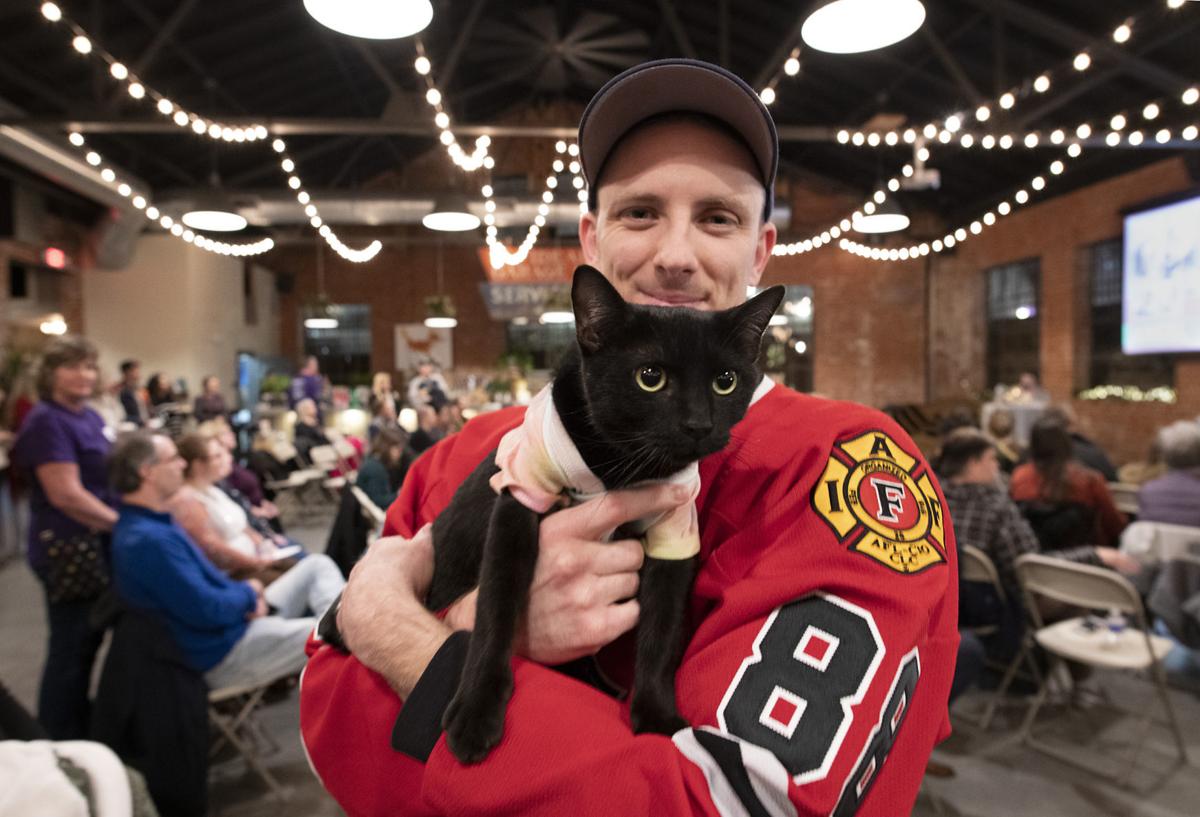 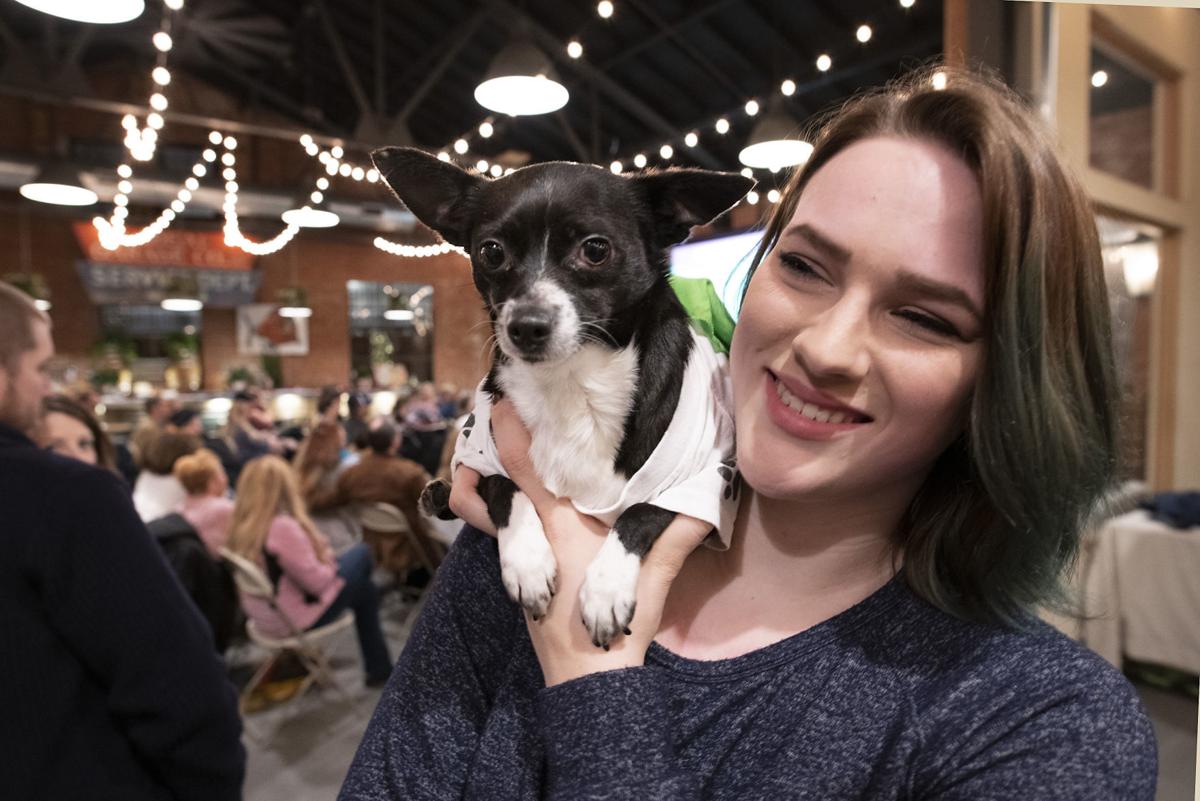 Waiting to be presented at the Holiday Happy Tails event Tuesday evening is Jojo, held by Hayley Beyer, a kennel tech at the Frederick County Animal Control Center. 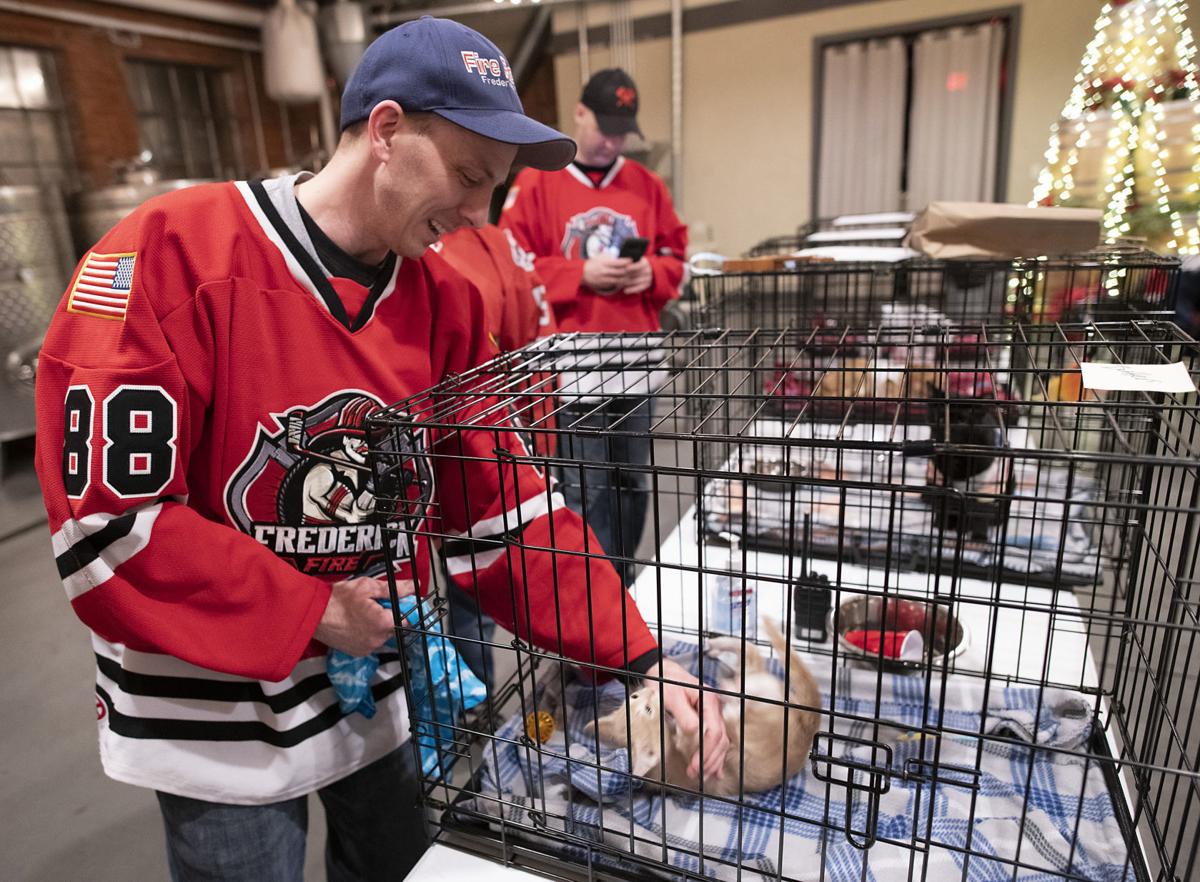 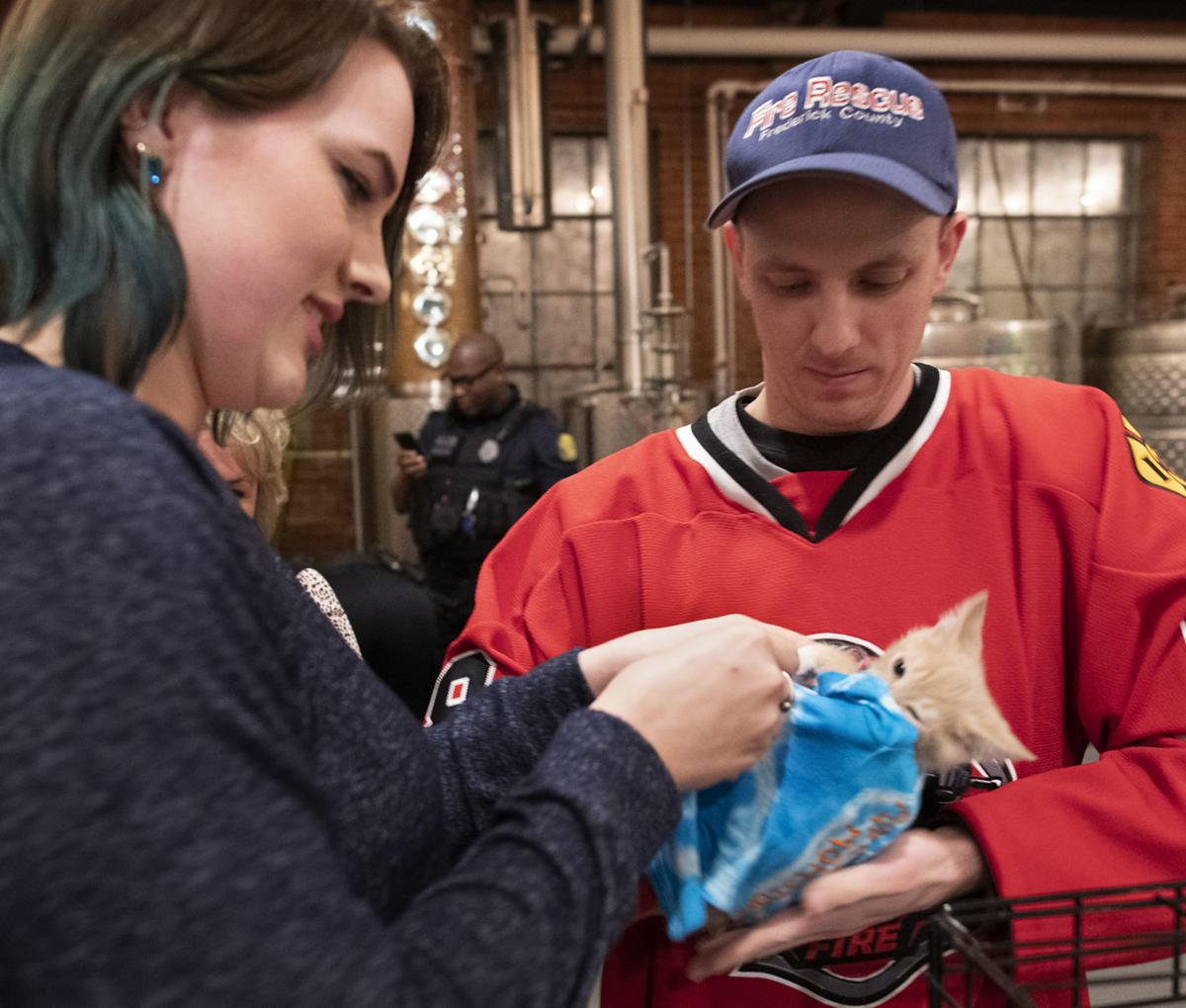 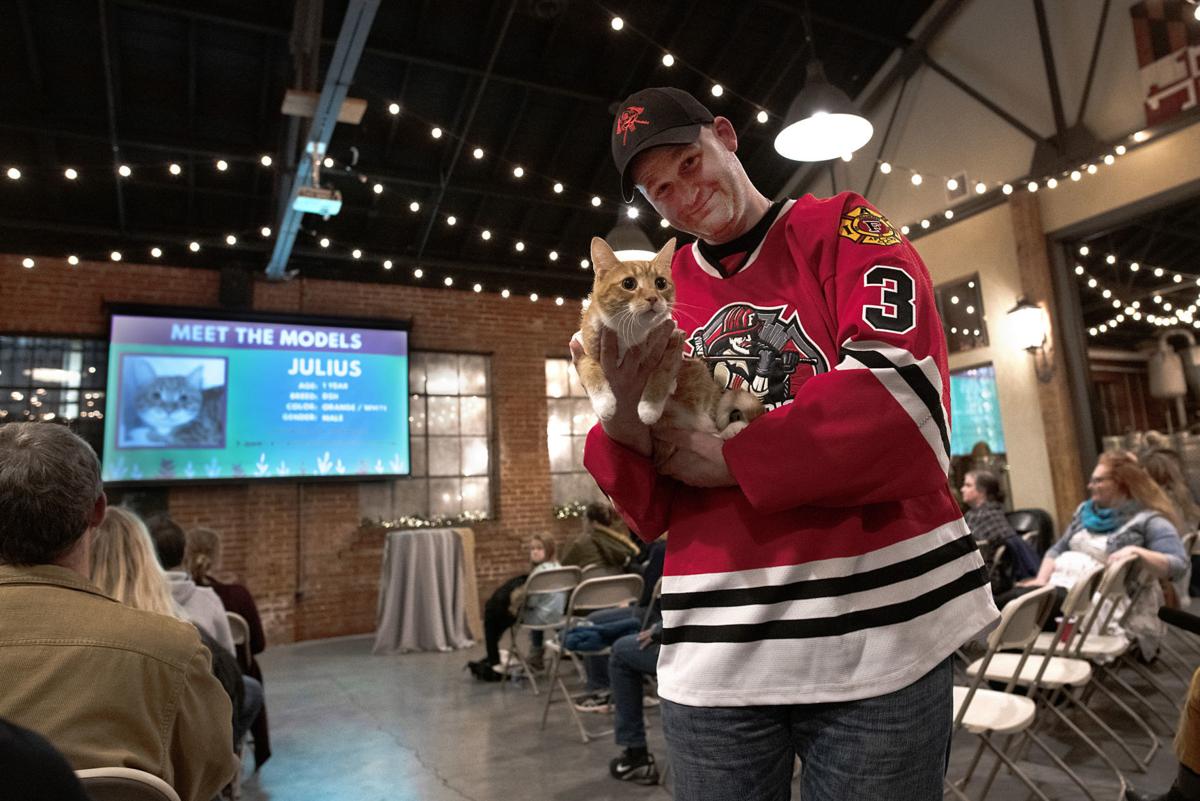 Volunteer John McKee holds Julius while on the runway at the fashion show during the second annual Holiday Happy Tails event held at McClintock Distilling in Frederick Tuesday evening. 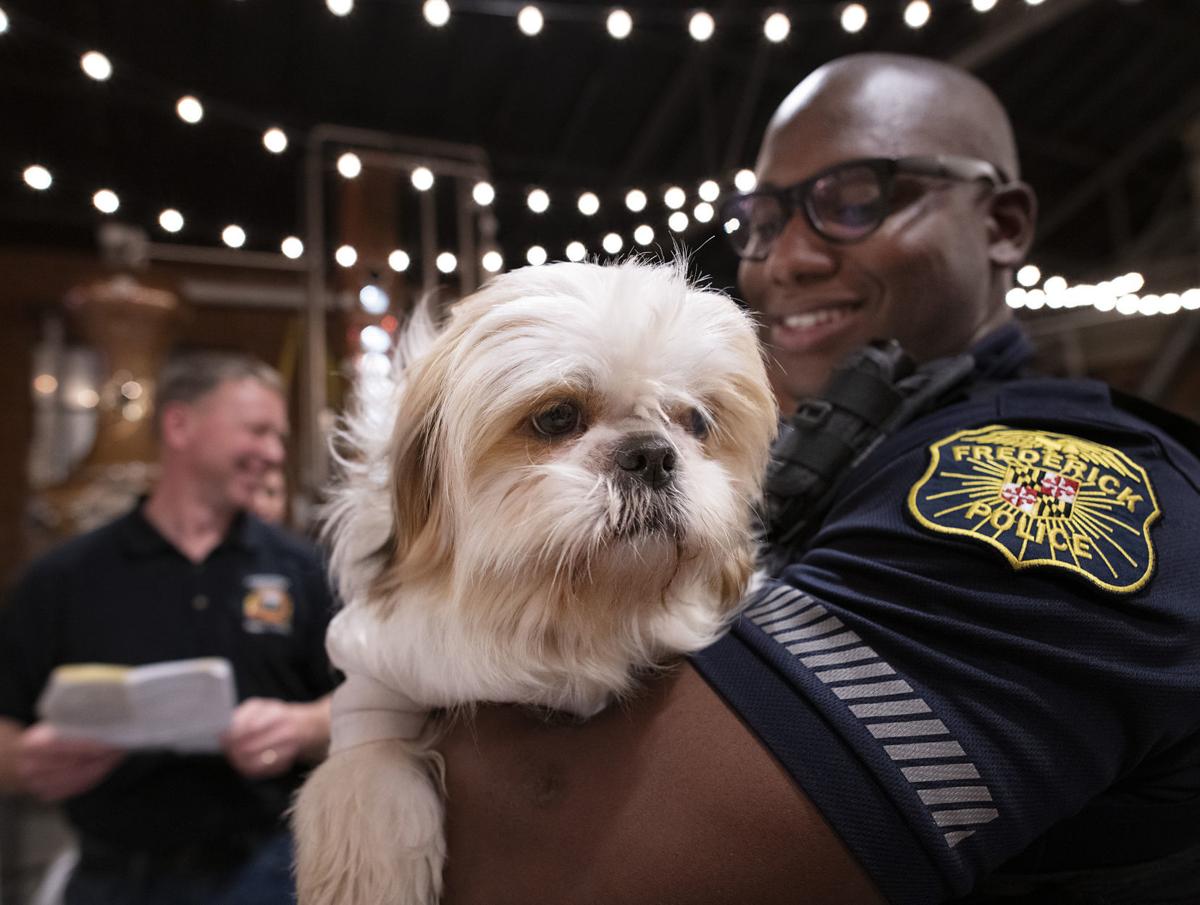 Mimi is held by Ofc. Willie Buntley of the Frederick Police before being presented for the fashion show during the second annual Holiday Happy Tails event held at McClintock Distilling in Frederick. Although most of the pets presented are available for adoption, Mimi has already been adopted. 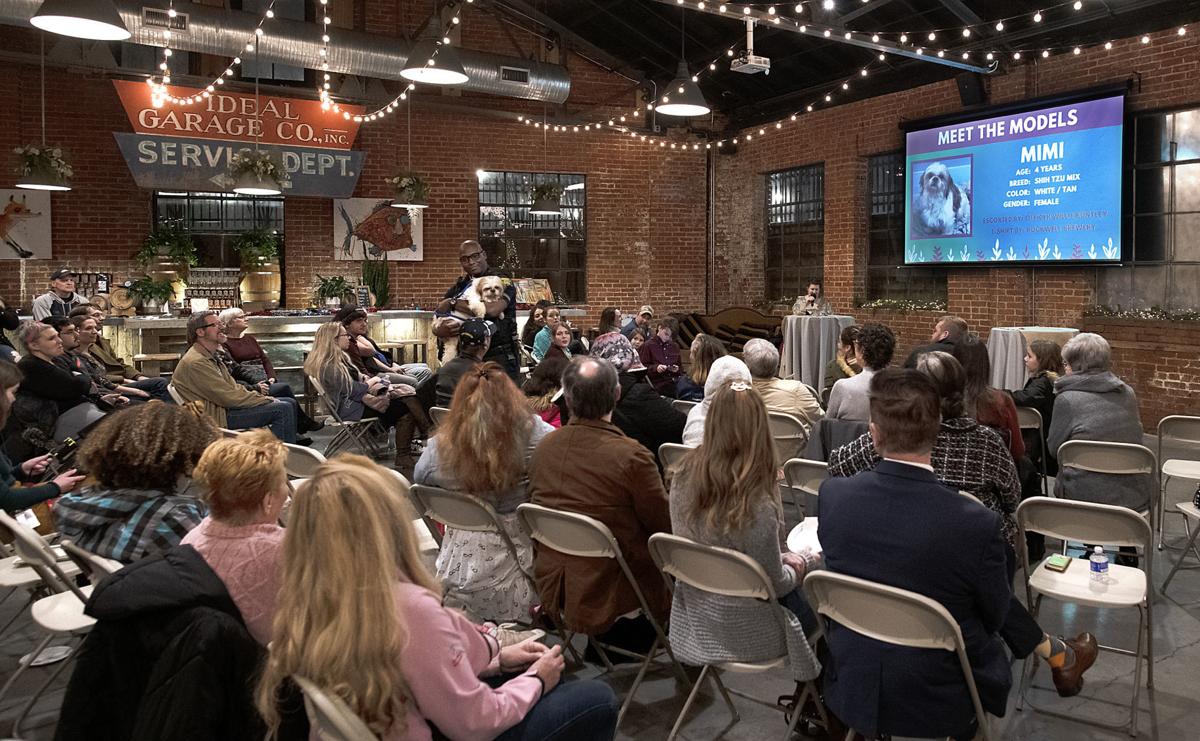 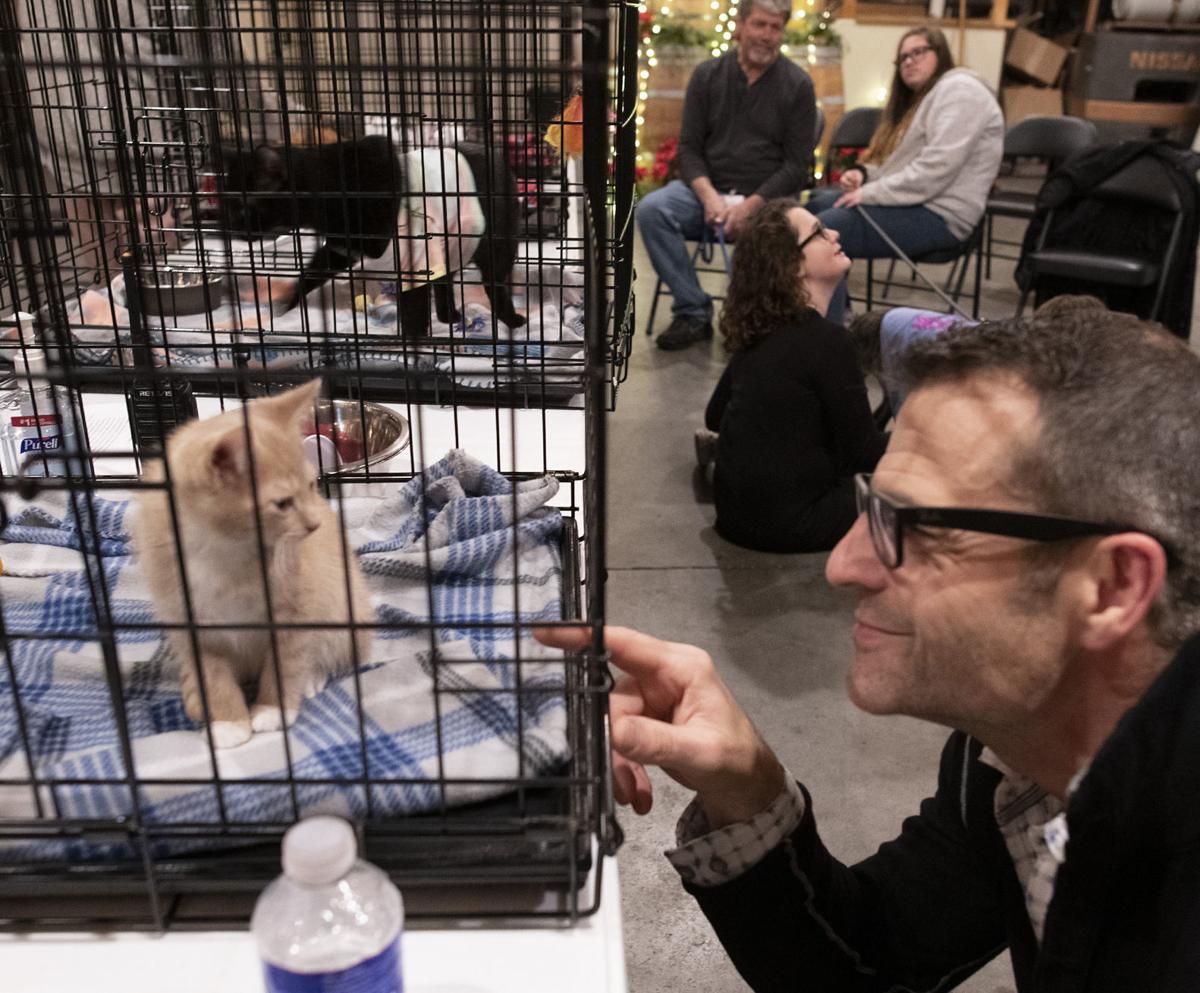 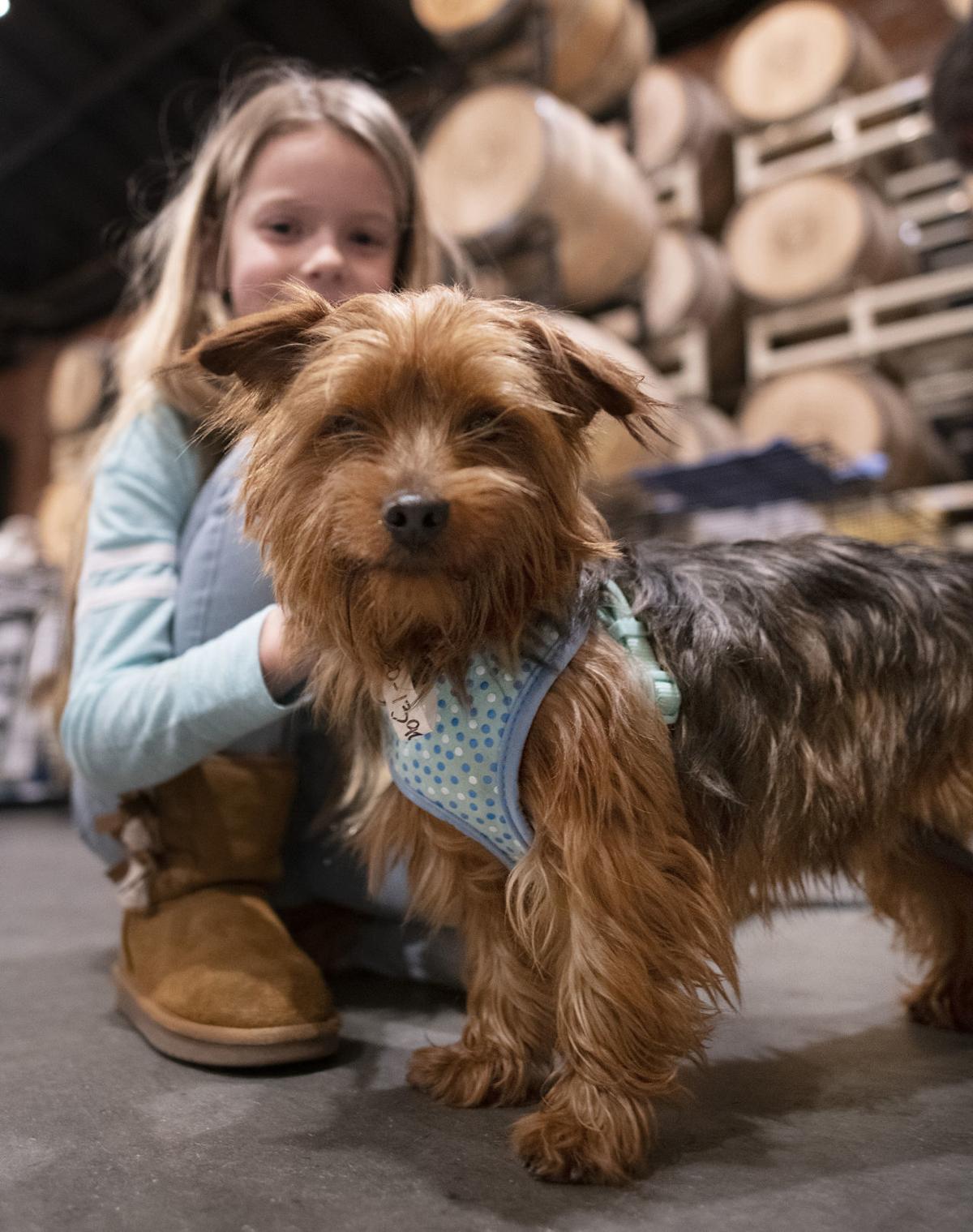 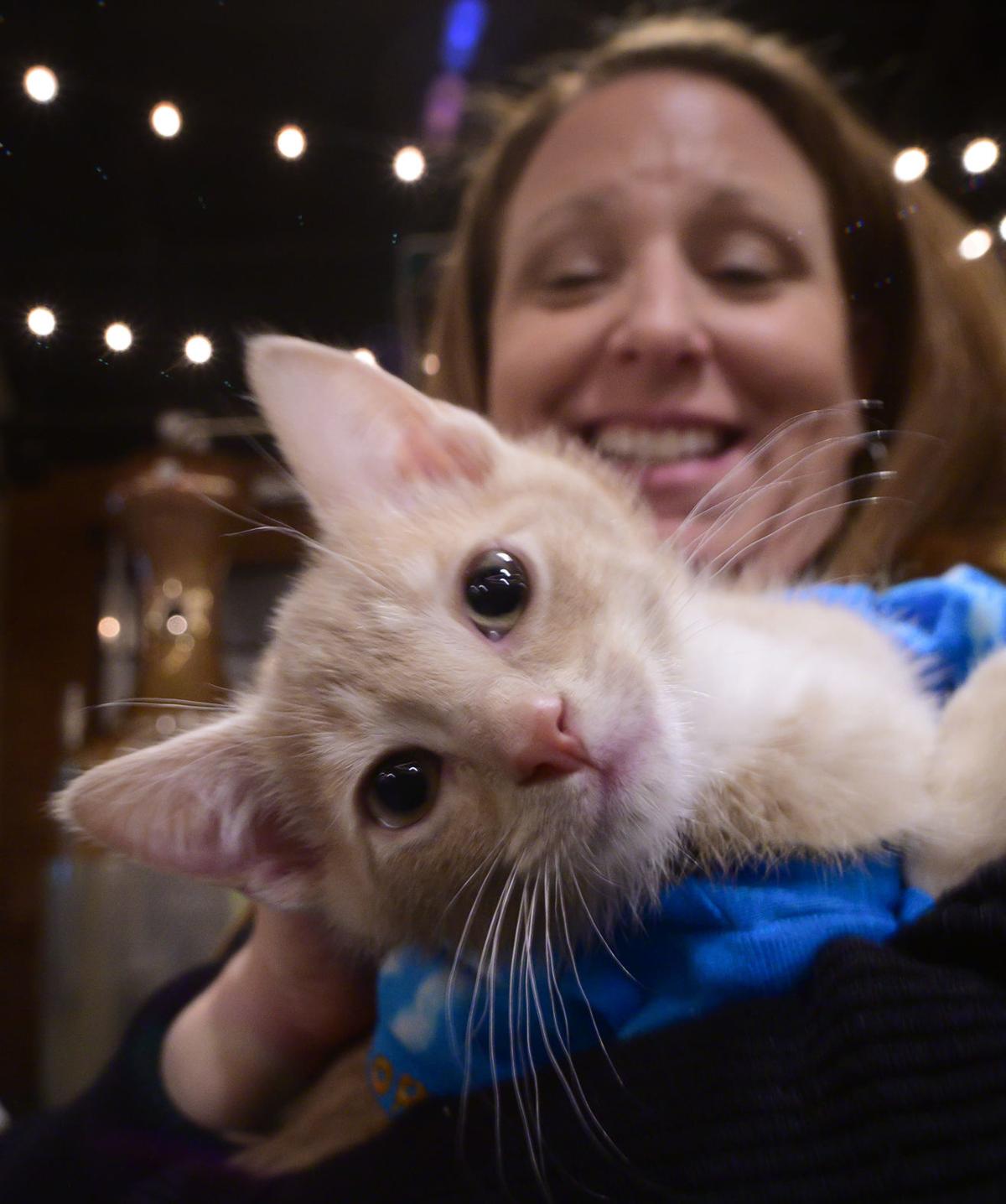 Waiting to be presented at the Holiday Happy Tails event Tuesday evening is Jojo, held by Hayley Beyer, a kennel tech at the Frederick County Animal Control Center.

Volunteer John McKee holds Julius while on the runway at the fashion show during the second annual Holiday Happy Tails event held at McClintock Distilling in Frederick Tuesday evening.

Mimi is held by Ofc. Willie Buntley of the Frederick Police before being presented for the fashion show during the second annual Holiday Happy Tails event held at McClintock Distilling in Frederick. Although most of the pets presented are available for adoption, Mimi has already been adopted.

Bassoon and Reed, a pair of bonded dogs up for adoption at the Frederick County Division of Animal Control and Pet Adoption Center, had a chance to be models as they walked the runway at the shelter’s Holiday Happy Tails event earlier this week.

The pit bull mix and Yorkshire terrier were clad in T-shirts sponsored by local businesses and walked down the runway by Frederick first responders.

The event, held Tuesday at McClintock Distilling on Carroll Creek, was a chance for the shelter to show off some of the animals up for adoption while sharing a number of success stories from 2019.

“We do happy things. We do wonderful things for animals in the community,” said Linda Shea, division director. “We wanted to put together an event that would demonstrate that, and also to dispel some of the myths that people have about the shelter, what we do, what we don’t do.”

One of those misconceptions, Shea said, is how many animals the shelter euthanizes.

“I think people, even if they don’t ask the question, they assume what the answer is,” Shea said.

The event was a chance to show that they always give the animals who come into their shelter a fighting chance, even if it is difficult. They try to place the animals in a home through a variety of means, including foster care or moving them to other rescue missions.

Fifteen of the shelter’s cats are living at the K.A.T. Cafe in New Market, where visitors pay a flat fee to play with the cats, all of which are adoptable.

Shea took to the microphone to share pictures and stories of animals adopted in the previous year.

One of those animals was Honey, who was brought into the shelter by a couple after she destroyed much of their furniture. Honey is now a cadaver dog in training, thanks to her strong will and sense of smell.

Before and after the fashion show, volunteers and employees of the shelter introduced attendees to some of the adoptable animals. Hayley Beyer, a kennel technician, held Jojo, a small Chihuahua mix who is nervous around people and was visibly shaking.

Beyer said that Jojo would make a great lap dog in a relaxed environment.

“I’m really just hoping that people get a view into why we do what we do,” Beyer said. “Sometimes the public has a negative view of some of the policies we use or some of the reasons we do things, but in the end it’s for the animals, always.”

Lisa Smith, a volunteer at the shelter, was introducing attendees to Bently, a 2-year-old pit bull mix who is visually impaired.

“Some of the dogs that come in are scared, and you have to start so slow, and to see them make progress, and see them get friendly and warm up and able to get adopted in good homes, it just makes it all worth it,” Smith said. “And of course they love on me just as much as I love on them.”

I've adopted 3 cats from two different local rescue groups. Both groups required a home visit to assure the kitties were going to a safe home.

miaow, same thing with me. I forgot about that when I commented earlier. I adopted a Maine Coon years ago and that was the case. I'm glad that they did that. In their experience (as they told me) they denied people for valid reasons.

I meant to say "too stringent."

I've adopted cats, dogs, birds and even a bearded dragon from our Frederick Shelter. I loved the process and now that I volunteer and foster I'm glad to be apart of the team that re-homes so many wonderful pets. Thank you everyone on the staff for all the dedicated and difficult work you do every day to help every animal that comes through the door!

So many pit bull mixes. Isn’t there some way to make pit bull owners more responsible so they aren’t allowing their dogs to breed all the time. If we are not going to ban pit bulls entirely, mandate that they must be neutered. Huge fines for owning a non neutered pit bull or pit bull mix.

A few months ago phy asked why I adopt pits from the shelter. Labs, beagles, and cocker spaniels will always be adopted into a forever home in short order. Pits and pit mixes are not, and it can be a one way drop off for them. They can actually be one of the most loving and loyal dogs. Ours are velcro. They are smart and love to work. Unfortunately, I can only take so many.

When I adopted my cat, I had a hard time within Frederick County. I met a good cat who liked me and my family and was told that because I had a full time job, I couldn't care properly for the cat by an entitled impassioned cat hoarder within PetSmart near Target. I tried to go to the shelter and was told I'd be put on a decision panel by those who know better than me whether I can have a pet or not. I ended up going to the Baltimore ASPCA who would adopt a pot to me based on me being able to do it and did not discriminate, I was able to leave with the pet. And that pet has been excellent. I do not recommend the Frederick adoption agencies who make it harder to adopt a pet than adopting a child. These people are jaded and do not understand the real world.

I had a totally opposite experience. They did a thorough interview to ensure I would provide a good home for the dog. At the time I worked full time and that was not a problem. They ensured I understood the expenses involved w pet ownership and that I could afford them. I went home with the dog, who was a wonderful pet until she passed away 10 years later.

Lar1, That is good to hear. All over the country, animal adoption policies are controversial. I hope our Animal Control Center does not turn away people who subsequently get pets from pet shops or breeders, thus adding to our pet overpopulation problem.

three, Reader1954 is correct. While some people may think that such shelters are being stringent, these responsible organizations have to look at many factors as to whether or not a pet is going to be treated with love. They need to screen for the crackpots (to the extent they can), whether a renter is allowed to have a pet(s), and whether the prospective adoption will be compatible with any existing animals in the home. In addition, there is an issue where young children in a home can harm a pet. Especially, very young children are notoriously known to be rough with a pet. An animal is not a toy. And, knowing how today's parents do not generally punish their child(ren) for their behavior, this is a criterion of the screening process (depending upon the organization).

Thump, was that your first time at the Frederick facility? We have been adopting dogs for about 20 years from there. Our first adoption was very imposing, and I left a bit offended. However, I guess they see that we treat our animals well, and keep coming back. The adoptions go quickly and smoothly now, so we're in and out.