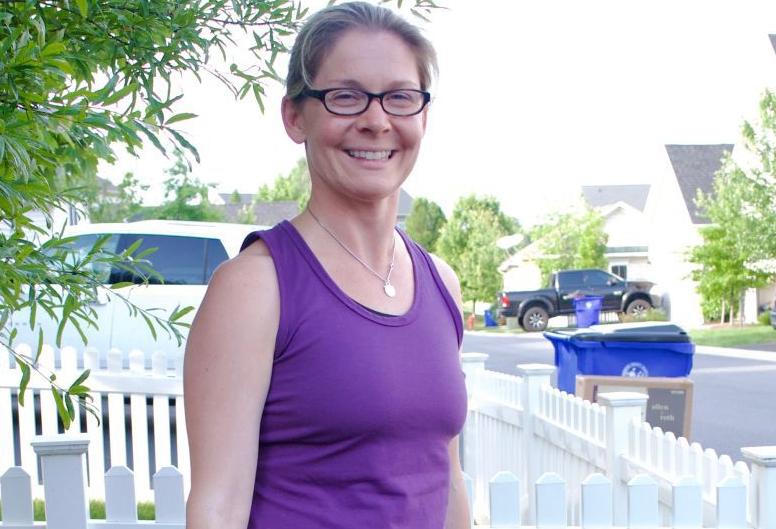 Ginger Cayo demonstrates how she carries the feral and stray cats she traps. Cats are then fixed before being released back to their colonies. 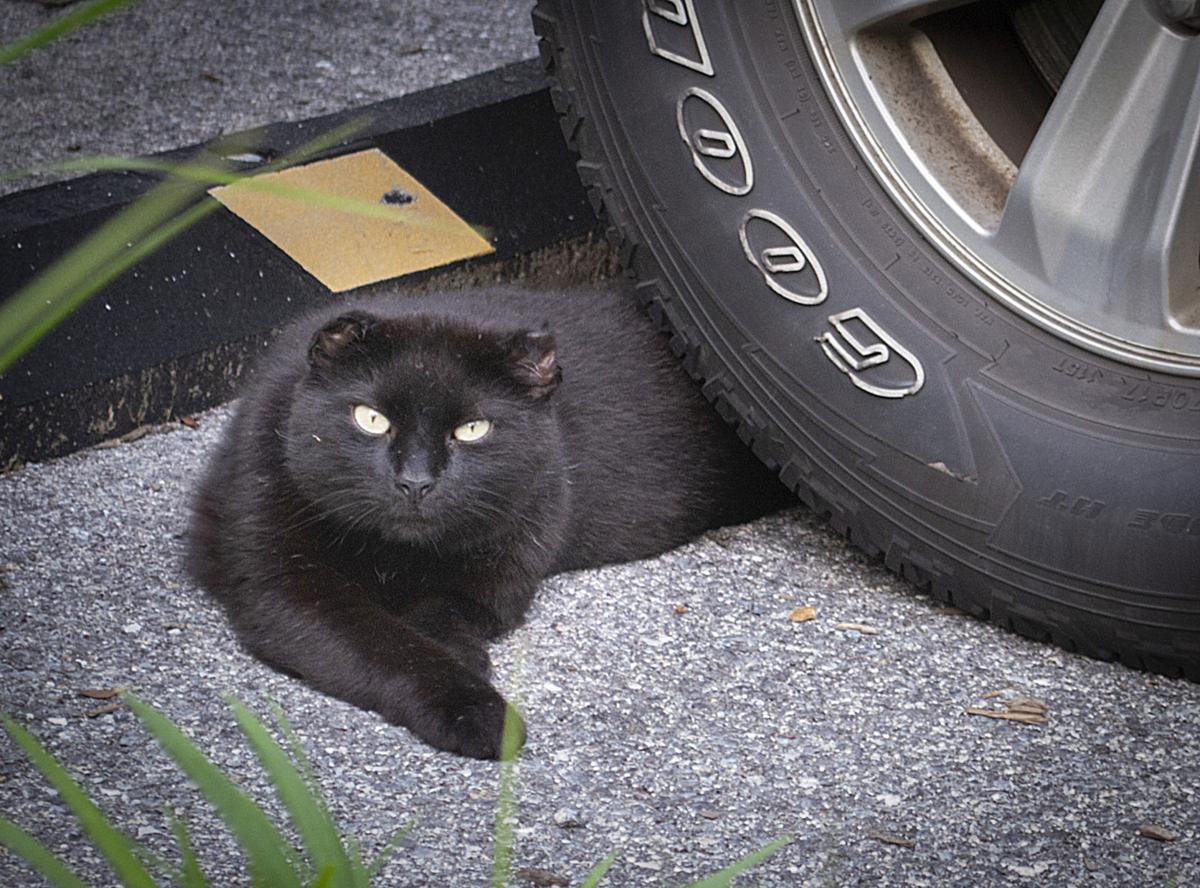 A feral cat lounges by a truck in the Brunswick City Hall parking lot. 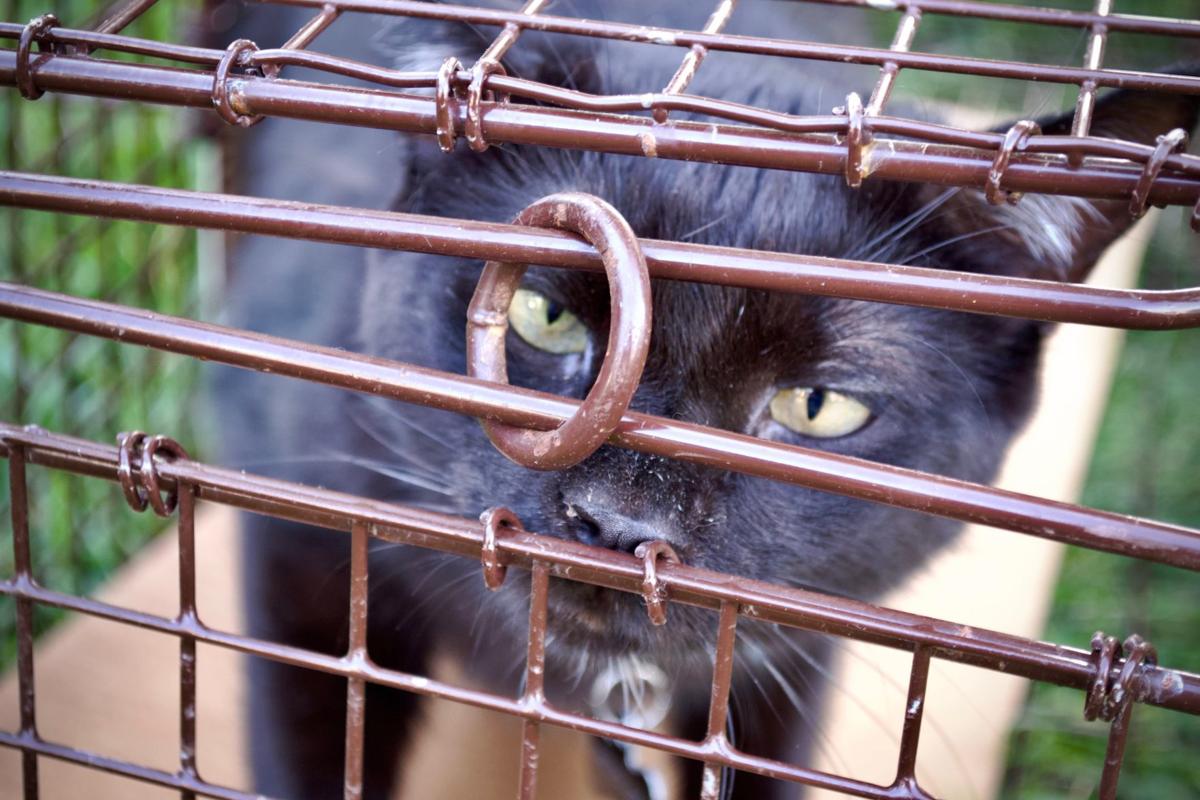 Ginger Cayo’s cat Merlin looks out from a trap Cayo uses to trap feral and stray cats. Once trapped, the cats will be fixed and then returned back to where they were found. Merlin was a kitten Cayo trapped and then adopted. 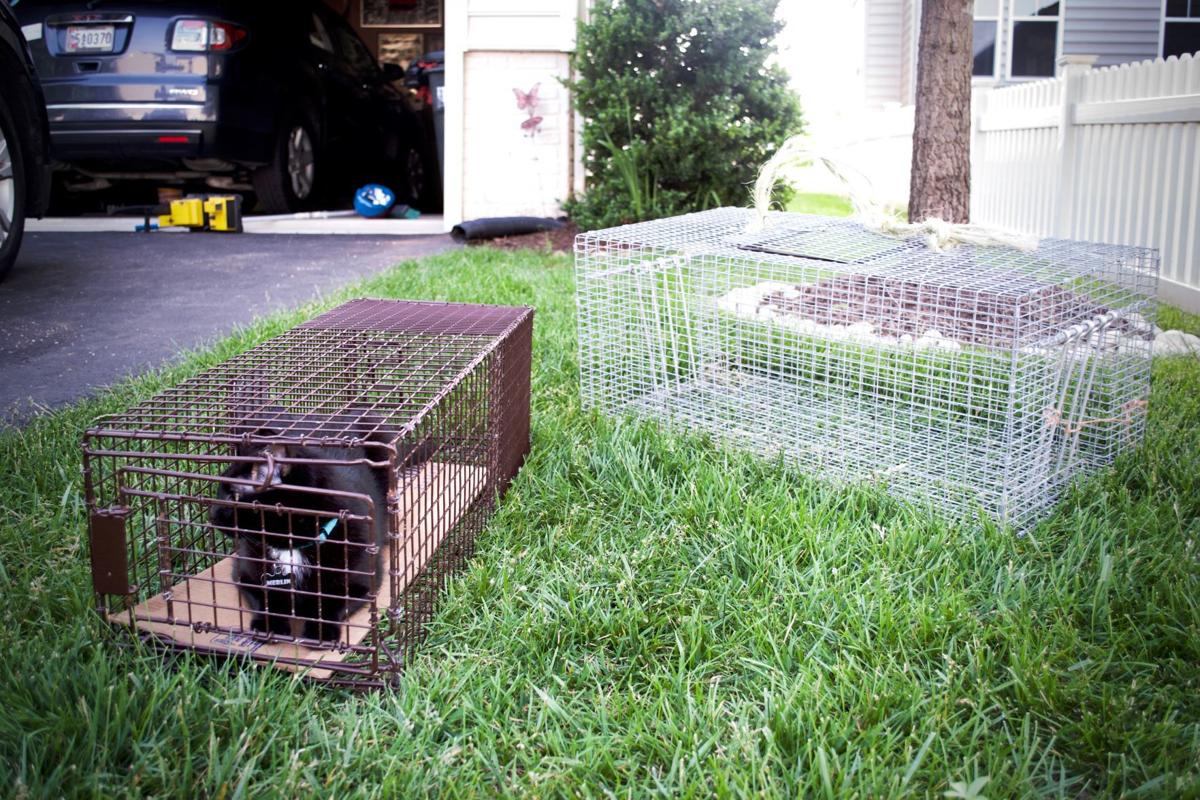 Ginger Cayo uses two types of traps to catch feral and stray cats. Once trapped, the cats will be fixed and then returned back to where they were found. Here, her cat Merlin demonstrates how a cat fits in one of the traps. 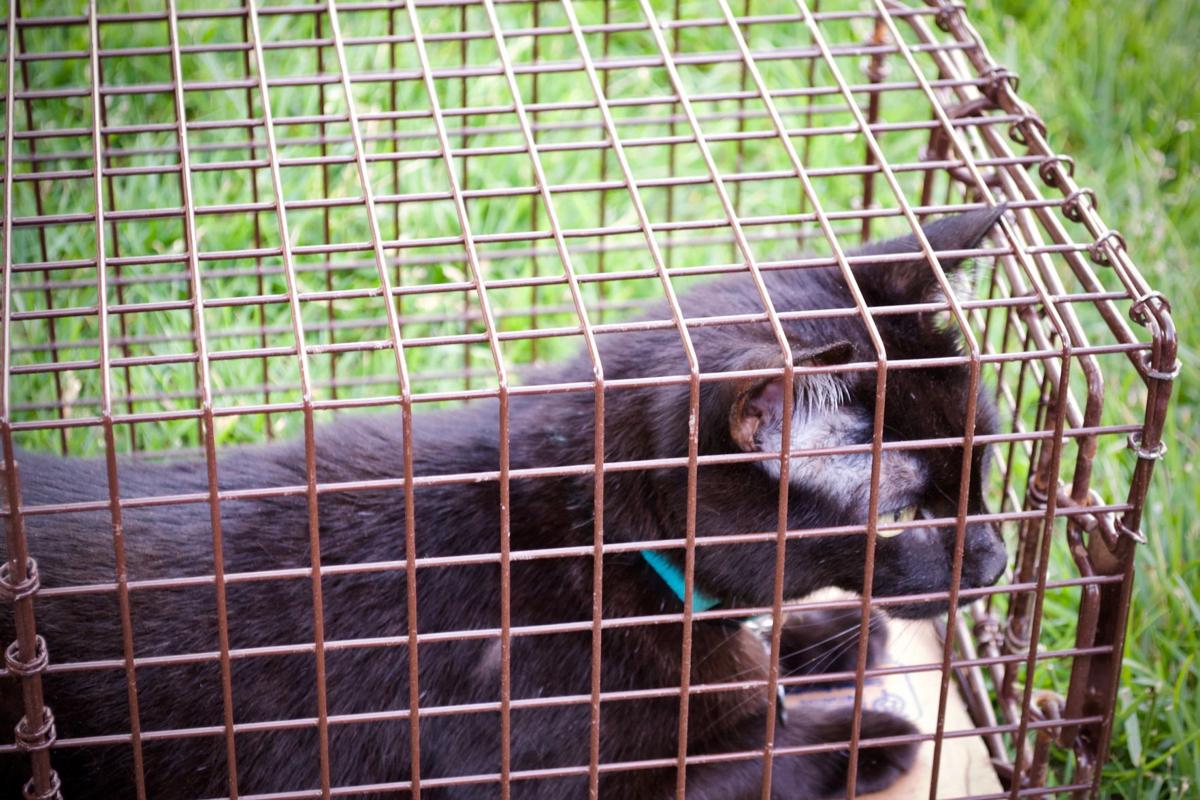 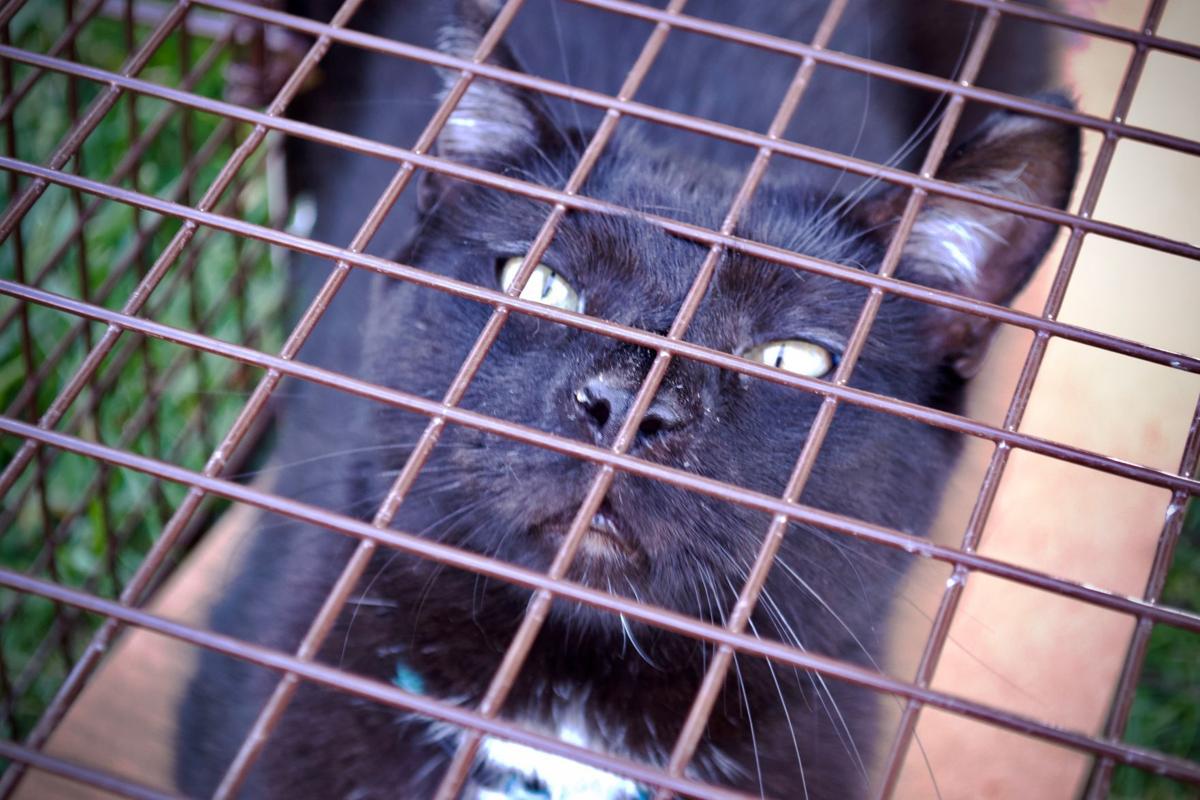 Ginger Cayo’s cat Merlin looks out from a cage Cayo uses to trap feral and stray cats. The cats are then fixed and released back to where Cayo collected them. 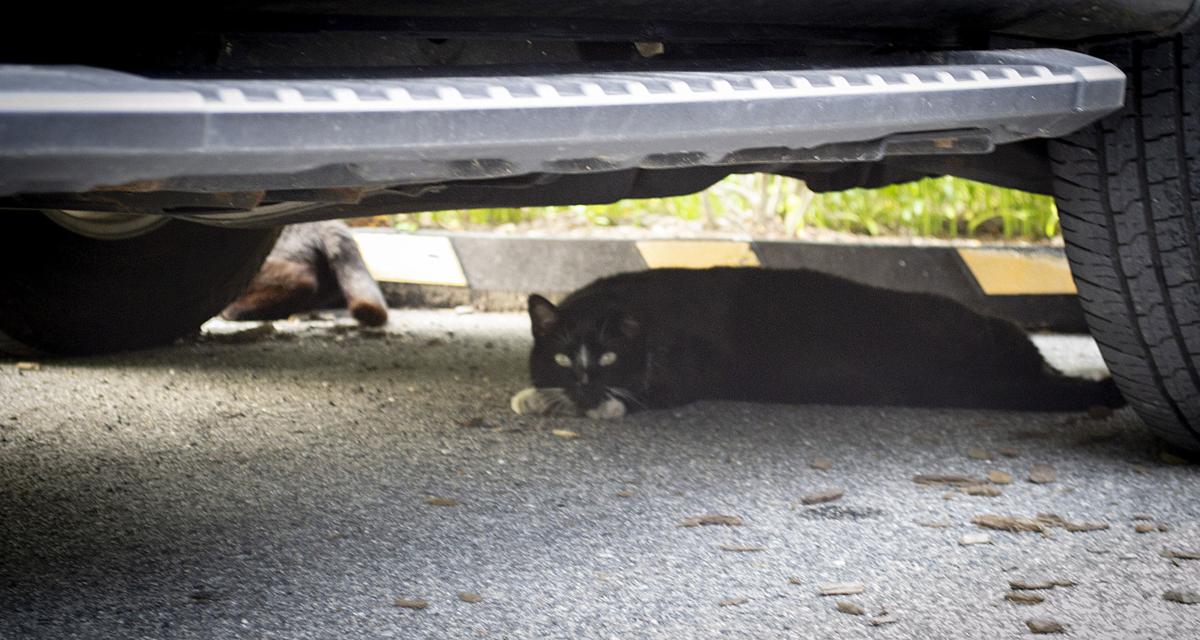 One of the feral cats in Brunswick finds shade under a truck in the City Hall parking lot.

Ginger Cayo demonstrates how she carries the feral and stray cats she traps. Cats are then fixed before being released back to their colonies.

A feral cat lounges by a truck in the Brunswick City Hall parking lot.

Ginger Cayo’s cat Merlin looks out from a trap Cayo uses to trap feral and stray cats. Once trapped, the cats will be fixed and then returned back to where they were found. Merlin was a kitten Cayo trapped and then adopted.

Ginger Cayo uses two types of traps to catch feral and stray cats. Once trapped, the cats will be fixed and then returned back to where they were found. Here, her cat Merlin demonstrates how a cat fits in one of the traps.

Ginger Cayo’s cat Merlin looks out from a cage Cayo uses to trap feral and stray cats. The cats are then fixed and released back to where Cayo collected them.

One of the feral cats in Brunswick finds shade under a truck in the City Hall parking lot.

On an evening in Brunswick, people walking to their cars in the City Hall parking lot might feel as if someone, or something, watches them as they unlock their car and drive away.

Even in the daylight, tiny, glowing eyes will follow passers-by, with a look of utter indifference.

Meet the kitties of Brunswick.

The group of feral, stray cats can often be spotted lounging under cars or in parking spots. Sometimes they’ll gather on top of a car. They are silent and could not care less about humans, even those with cellphones out, trying to take a picture.

The cats are a staple of Brunswick, as much as the railroad station or the churches that line East A Street.

“They have been there for quite a few years now,” said City Clerk Carrie Myers.

The cats are part of a colony that is maintained by a local woman who feeds the cats. The cats in the colony have been trapped, neutered and returned, meaning the cats can no longer breed. Because of the trap, neuter, return program, or TNR, the colony in Brunswick has low numbers, said Kathy Valdes, who monitors the City Hall colony.

The ladies behind the cats

Valdes and Ginger Cayo, a Brunswick resident who traps and returns cats around Brunswick, Rosemont, Knoxville and sometimes Mount Airy, could easily be called the cat ladies of Brunswick.

The two met in 2015 after Valdes took over the City Hall cat colony and Cayo approached her offering to help. Cayo now goes to areas around Brunswick to help capture new cats and kittens.

She sets out traps in areas that colonies prowl. A piece of chicken or meat, often from a fast-food place, attracts the cat to the cage. Once it goes inside, a pressure lever will release the door, trapping the cat.

Cayo then takes the cats to be fixed and vaccinated. She’ll release the cats in a matter of days, once they are healed, in the area where she trapped them.

Cayo owns cats, one a black cat named Merlin she tamed as a young kitten, as well as dogs. She got into trapping because a love of cats is in her blood, she said.

“When I moved here, and I realized there was a feral cat problem, I felt compelled to do something about it,” Cayo said.

Both Cayo and Valdes trap and return cats, helping to keep the colony numbers low. Valdes also manages the Brunswick City Hall colony, which means feeding the cats. While the feral cats care little about humans, they do know Valdes, she said — or at least the sound her tires make when she arrives with food.

Valdes started as the colony caretaker in 2015, after the previous caretaker moved away.

The colony is considered stable because the numbers have continued to fall. There are about six regular members of the City Hall colony, mostly domestic shorthairs and tabbies.

The cats in the colony all share a feature: Their left ears are tipped. It’s a procedure done while the cats are being fixed by vets and under anesthesia, Cayo said. But the tipped left indicates that someone trapped the cat and brought it to a vet to be fixed and vaccinated before being returned to its colony.

The number of cats has stabilized because of the TNR program, Valdes said. The last kittens born in the colony were trapped in 2015 with their mother. The mother was trapped, fixed, vaccinated and returned, she said in an email. The kittens were adopted.

Right now, it is kitten season for most colonies. Cayo trapped seven kittens in one week.

Kittens are young and can be tamed, Cayo said. Most cats, once feral, cannot be tamed.

That means they do not make good house pets.

“Caretakers don’t want people picking up cats whose temperament and medical histories they are not familiar with,” Valdes said in an email. “We don’t want people to bring cats home only to find that they are severely allergic to cats, the new cat doesn’t get along with existing pets or household members, the new cat is not an ‘indoor cat,’ or quite simply that they don’t have the means to properly care for the cat. We don’t want these people to then release the cat in an unfamiliar location, pass them off on Craigslist, or drop them off at Animal Control.”

Similarly, cats cannot just be dropped off at different colonies. They are territorial, Valdes said.

“Volunteers like Ginger and I spend many hours feeding, vetting, socializing, creating shelters for cats, and do our best to find them homes/barns if they are adoptable,” she said in an email.

Those looking to help the cats can donate food to Valdes, who can feed it to the animals, or straw in winter for shelters, she said. They can also advocate for TNR.

Valdes shares information about the cats she cares for cautiously because not everyone wants cats around them. She said in the email that she has received threats against different colonies she maintains.

The cats in the City Hall colony have shelters outside the parking lot, but they do tend to lounge about on the asphalt. With that in mind, those driving in the parking lot should keep an eye out for cats while driving.

This means going slow in the parking lot, Valdes said.

People can also check under the cars or in the space above their tires, especially in winter. Valdes recommends banging on cars or blowing the horn during winter to give cats a chance to move.

Now that it is summer, the cats use cars as umbrellas. They’ll lounge by the wheels of cars, glaring as people walk past.

To donate to the Brunswick cats

The following places will take donations for feral cats. Donations should indicate they are for the Brunswick cats.

Thank you Ginger and Kathy!!!

So, is the goal for the colonies to eventually go down to zero cats? If so, how often is that successful? Feeding them presumably reduces their killing of wild animals - rodents and birds, but I wouldn't be surprised if a lot of the food set out for them is actually eaten by rodents. Could these well-meaning people be increasing the local rodent populations?

Not likely at all. Cats are predators and the urge to hunt and kill doesn't go away with free food. My housecat would give anything to escape and have a killing spree, and he's never hungry

TNR programs have been used in large cities that are over-run with rodents to move cat colonies to neighborhoods with huge rat problems. The results are miraculous, with the rodent problem being all but eliminated within months.

That's an odd picture to go with the headline. It suggests a more drastic solution to the problem.

They live trap the cats so they can spay/neuter and vaccinate. The one in the pic is a demo cat (house cat).

Great Story! I too am a Feral Purr-Mom hear in Florida. I have been helping with the TNR program and it does make a difference. I wish more people would get involved. A special shout out to all my Purr-Sisters and Brothers!!

Bless you. Our cat problem isn't just City Hall, it's all over the town. I have TNRd and re homed 8 kittens myself. Sadly, some people are cruel and try to poison them, or just speed along and hit them without any care. Thanks for your efforts in trying to make these poor forsaken creatures (who did not ask to be born) , have a somewhat comfortable life.

stefcfi, you say it all. Thank you for caring and for the lady featured in the article. I also thank the rest of you for caring and your actions to take care of the cats. I know a couple of people active in dealing with feral cats in other areas. They are wonderful, dedicated folks.