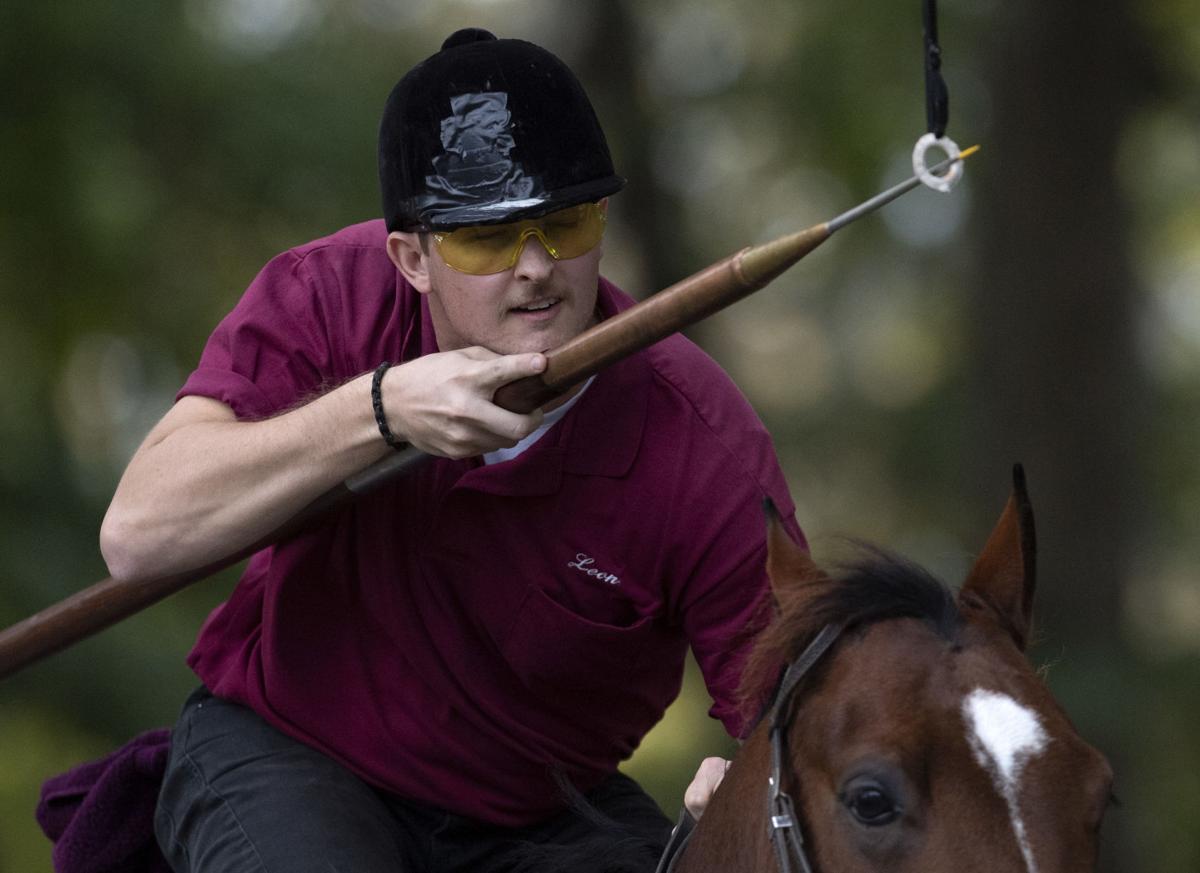 Jouster Bradley Enfield, charges at a ring on horseback on his way to winning the professional class competition of the 53rd National Jousting Championships, held Saturday just outside Brunswick. 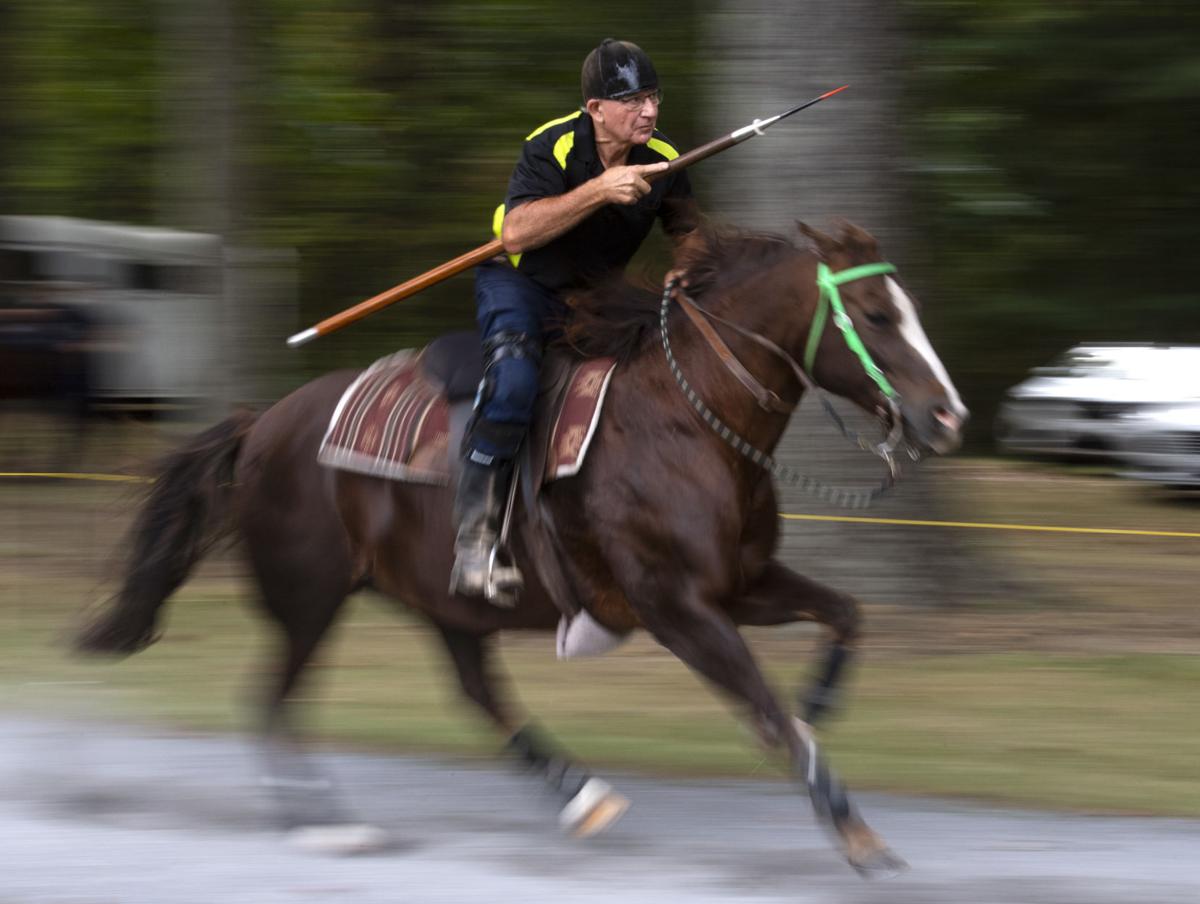 Michael Virts charges at a suspended ring during the professional class competition of the National Jousting Championships Saturday just outside Brunswick. 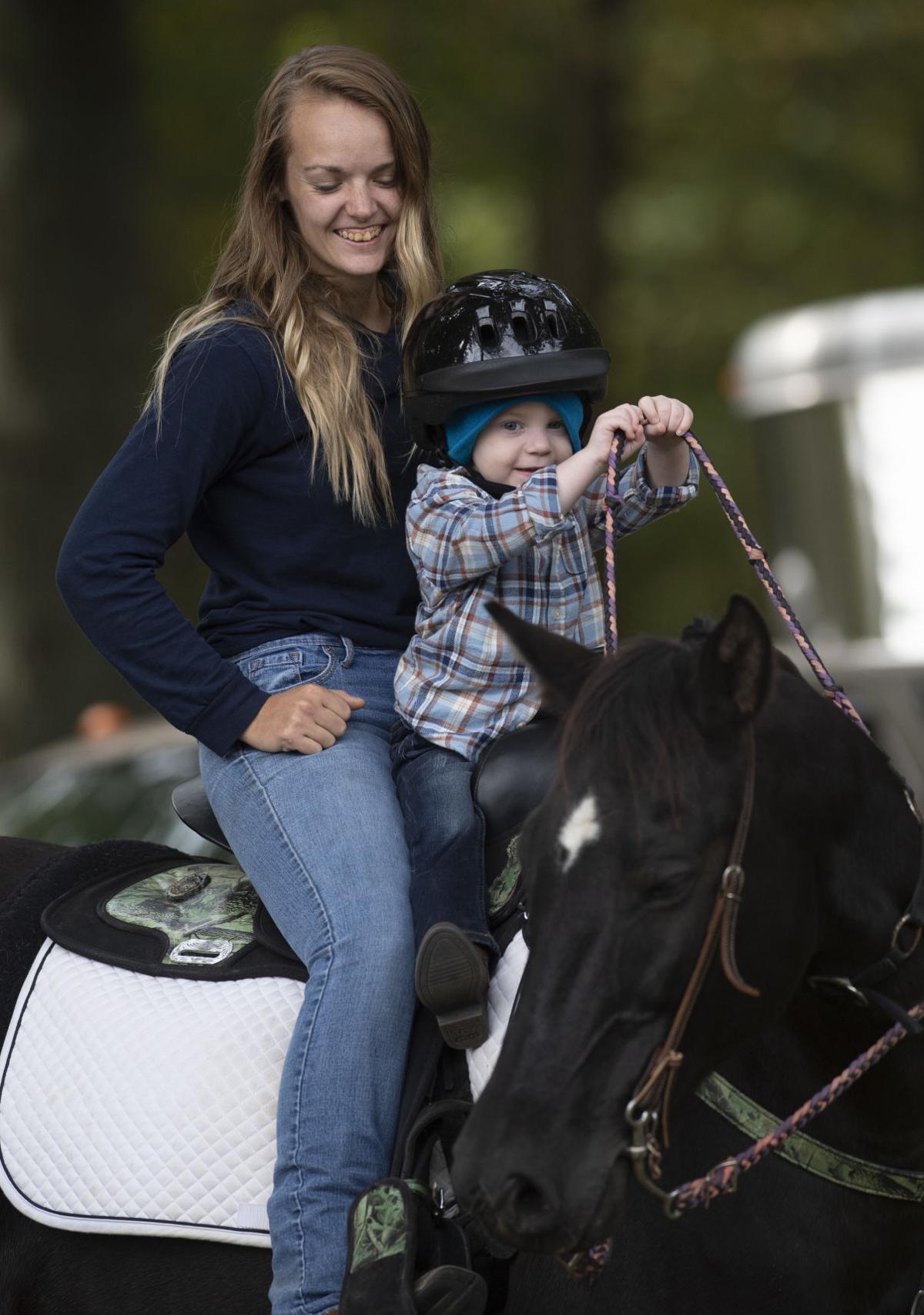 Kieran Patrick, 2, sits atop a horse with his cousin, Michaella Patrick during the National Jousting Championships, held Saturday near Brunswick.

Jouster Bradley Enfield, charges at a ring on horseback on his way to winning the professional class competition of the 53rd National Jousting Championships, held Saturday just outside Brunswick.

Michael Virts charges at a suspended ring during the professional class competition of the National Jousting Championships Saturday just outside Brunswick.

Kieran Patrick, 2, sits atop a horse with his cousin, Michaella Patrick during the National Jousting Championships, held Saturday near Brunswick.

Jousting might bring to mind medieval knights and heavy armor, but for the members of Maryland’s many jousting clubs, it’s a still-modern sport. Proof of that came Saturday when the National Jousting Tournament, in its 53rd year, was held at Petersville Farm Woods on Md. 79.

Seeing that jousting is Maryland’s state sport, it makes sense that many of the competitors in the National Tournament are from the state, in addition to West Virginia and Virginia.

In jousting, competitors ride a horse through three archways, each of which has a small ring hanging from it. The rider uses a lance — a type of baton with a narrow, pointed end — to try to catch the three rings. They have three passes to attempt, for a highest possible total of nine rings.

While there has definitely been a decrease in the number of participants in recent years, this weekend’s tournament saw the biggest turnout of any event at the field this year, said Marley Enfield, 22. She’s been riding since she was 2.

She says that she enjoys the sport for the connection with the animal as well as the community.

“We all know each other. We all try to come to as many as we can to support each other,” Enfield said. “So it’s really like just one big family.”

Jousting is also a family affair for the Enfields.

“When Dad was still riding, we had four generations all riding in our family, 10 people,” said Bobby Enfield, Marley’s father. His father, Leon Enfield, who was one of the main founders of jousting in Petersville, died in 2018.

The day began with the lead line competitors, who ride a horse as one or two helpers lead it. Instead of using a lance, these participants usually use half of a pool cue.

Lead-line is meant to help new or young riders gain confidence, said Bobby Enfield. Two participants on Saturday were not yet 3 years old.

The following classes are novice, amateur, semi-professional and professional. Once riders get to the amateur class, they are timed, having to cross the 80-yard field in eight seconds or less.

While that’s clearly a challenge, the partnership between rider and horse is actually the biggest challenge, said Mike Virts, a 21-time state champion who grew up in Knoxville. He said practice is the only way to get used to riding a horse.

“You don’t really want to think about your horse, you just want to be thinking about the rings, but you gotta make sure that your horse is gonna do what you want him to do,” she said.

The first-place winners at the competition were:

It's incredible to watch a jouster on horseback, galloping toward every smaller rings and getting that lance through one as small as you see in the picture. On horseback. Galloping. With a long lance. Incredible.

Go, Ms. Enfield! We know what you're doing when you're not teaching! Fantastic to hear about this!