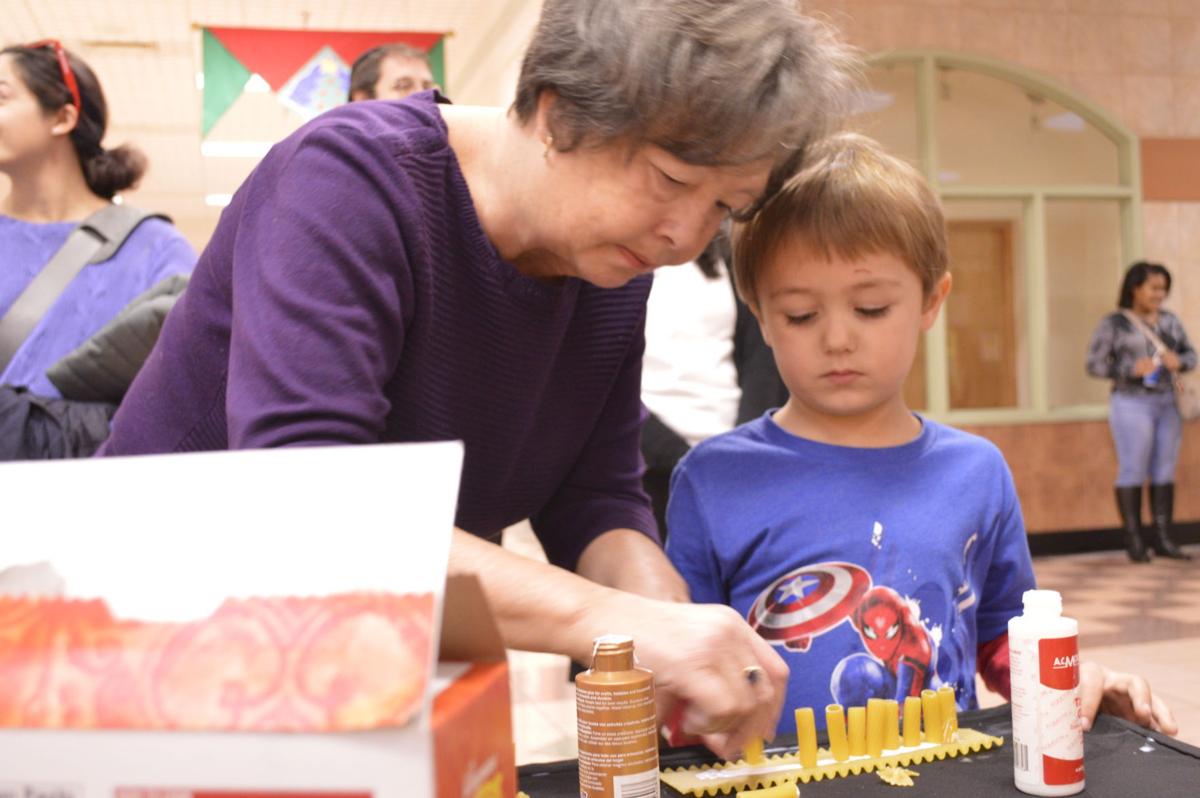 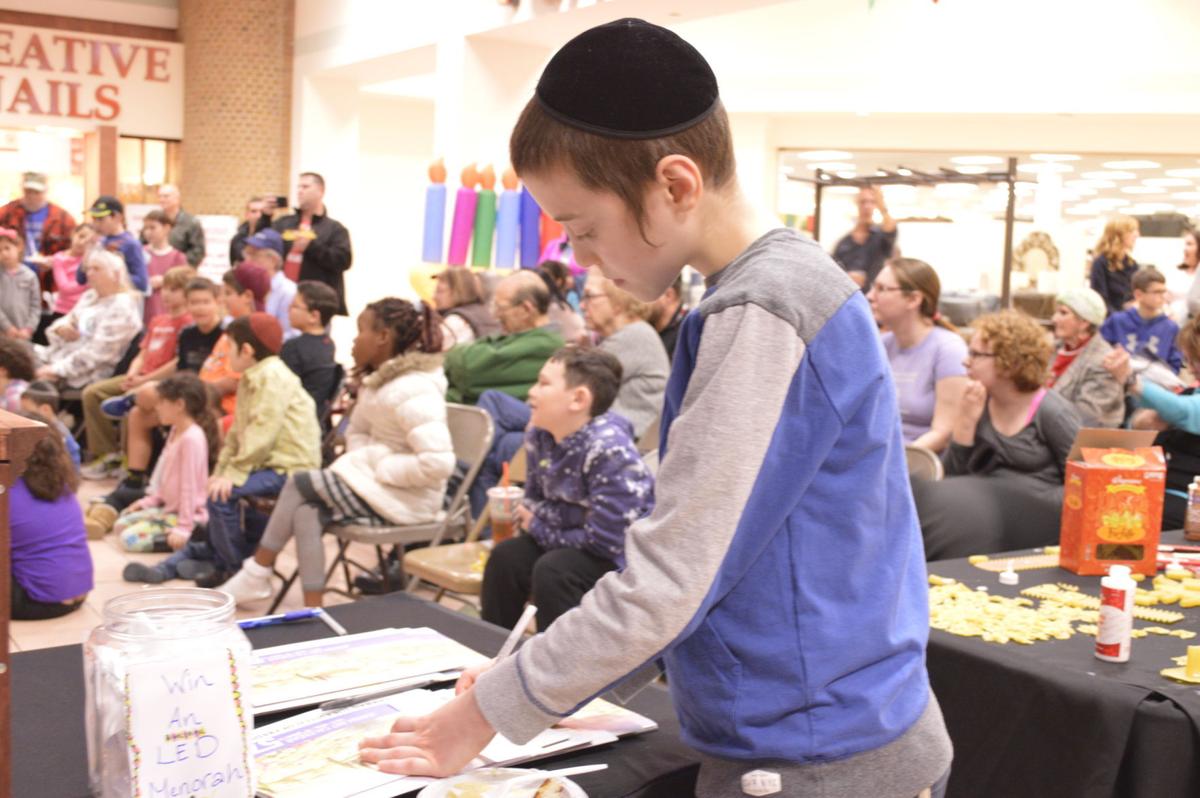 Mendel Schmukler, of Brooklyn, New York, adds his name to a raffle for an LED menorah at Chabad Lubavitch of Frederick's annual Hanukkah party on Sunday at the Francis Scott Key Mall. 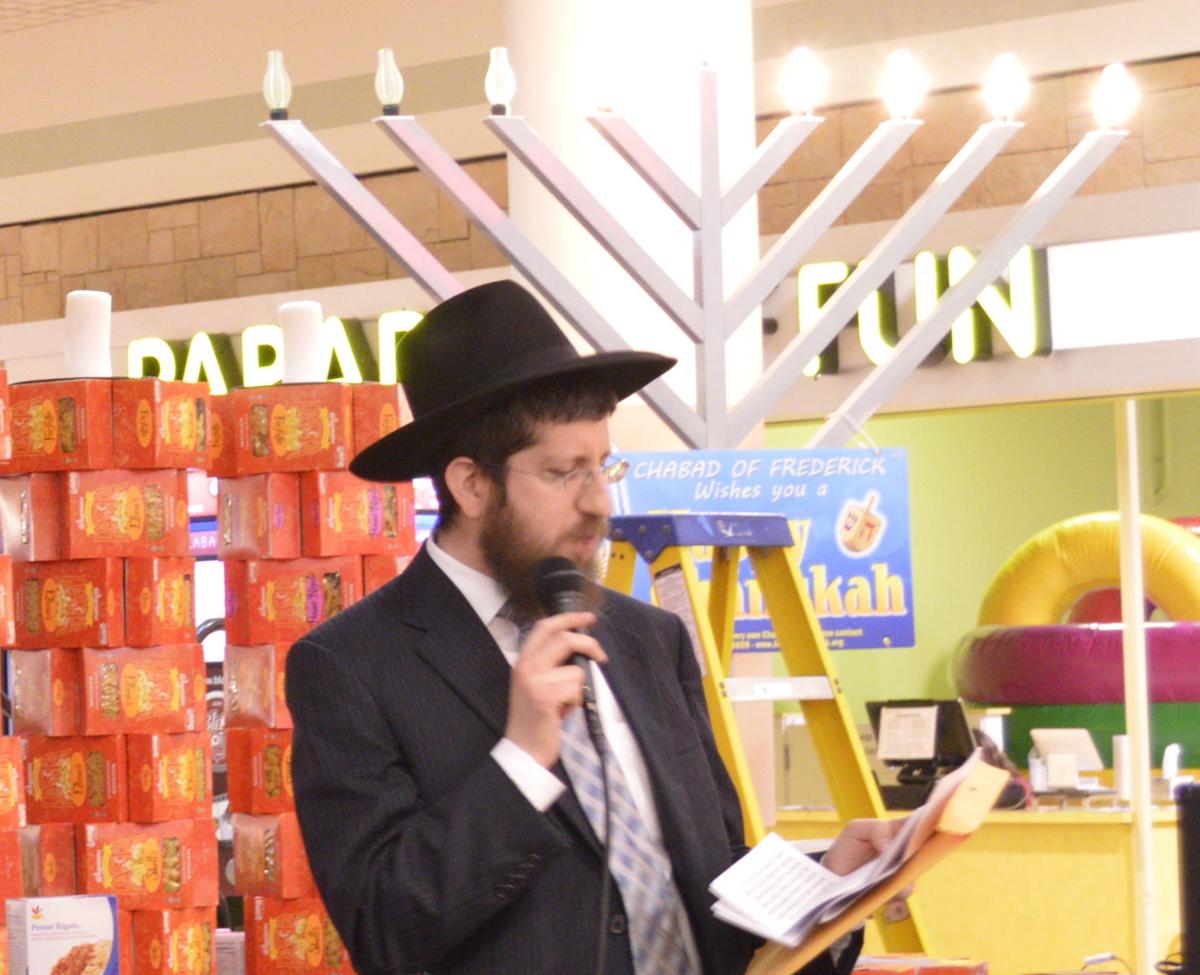 Rabbi Boruch Labkowski, founder and leader of Chabad Lubavitch of Frederick, leads a prayer at the Chabad's annual Hanukkah party on Sunday at the Francis Scott Key Mall.

Mendel Schmukler, of Brooklyn, New York, adds his name to a raffle for an LED menorah at Chabad Lubavitch of Frederick's annual Hanukkah party on Sunday at the Francis Scott Key Mall.

Rabbi Boruch Labkowski, founder and leader of Chabad Lubavitch of Frederick, leads a prayer at the Chabad's annual Hanukkah party on Sunday at the Francis Scott Key Mall.

Pasta took on a new shape at the Chabad Lubavitch of Frederick’s Hanukkah party at the Francis Scott Key Mall on Sunday.

Red pasta boxes stacked into nine towers, a candle perched atop each, created a life-size menorah marking the entrance to the festivities. At a nearby table, children glued penne onto long, flat lasagna noodles, creating their own versions of the nine-branched candelabrum associated with the Jewish holiday.

The annual event each year uses a different material to fashion into a menorah. Last year, it was LEGO pieces, said Bryce Roberts, 7, of Mount Airy. He called the choice of pasta “funky and weird,” but added that it was “really cool.”

After finishing the craft, Bryce and his sister Chloe joined others sitting on a row of folding chairs, watching with with rapt attention as a pair of performers blew bubbles into the air. Behind them, adults gathered in small clusters, talking in between bites of potato pancake and applesauce.

Bonnie Pollack gazed longingly across the room to the heating trays laden with the latkes and doughnuts. Pollack, a Braddock Heights resident and member of the Chabad, named the traditional dishes as a highlight of the annual event.

“Anything I can eat,” she said with a laugh.

But, she added, the event was about more than free food. For Pollack, it was a chance to come together with fellow Jews, those who belong to the Orthodox Chabad as well as other local synagogues, and with the wider Frederick community.

“We don’t have a very large Jewish community in Frederick,” Pollack explained. “To get to do this, to celebrate our religion with everybody ... it’s awesome.”

And the mall, with its crowds of shoppers and Christmas music playing in the background, offered the perfect opportunity to do so, said Rabbi Boruch Labkowski, the founder and leader of Frederick’s Chabad. Unlike with other Jewish holidays, which Chabad members celebrate as a congregation in their synagogue, the Chabad has always chosen public places to commemorate Hanukkah, he said.

“The point of the holiday is that the miracle should be spread with others, shining our lights not just within but to the wider community,” he said.

Literal light from the menorah candles and the metaphorical light from acts of kindness and goodwill offer ways for Jews to embody the holiday spirit, he said. The life-size “mac-o-norah” accomplished both, drawing in curious shoppers and serving those in need. The pasta boxes will be donated to a local food pantry, Labkowski said.

Margaret Schuff, a Frederick resident, knew nothing of the holiday before coming with her two grandchildren to the event, she said. She was not Jewish, but felt it was important to learn and to expose her grandchildren to other beliefs and cultures, she said.

She knelt down with her grandson, Raylan Freeman, and began helping him craft a pasta menorah. Freeman, 5, looked uncertain, but smiled as he watched the performers blow bubbles from the stage.

Meanwhile, Schuff secured a business card and brochure about the Chabad.

“Now we are going to learn something new,” she said.