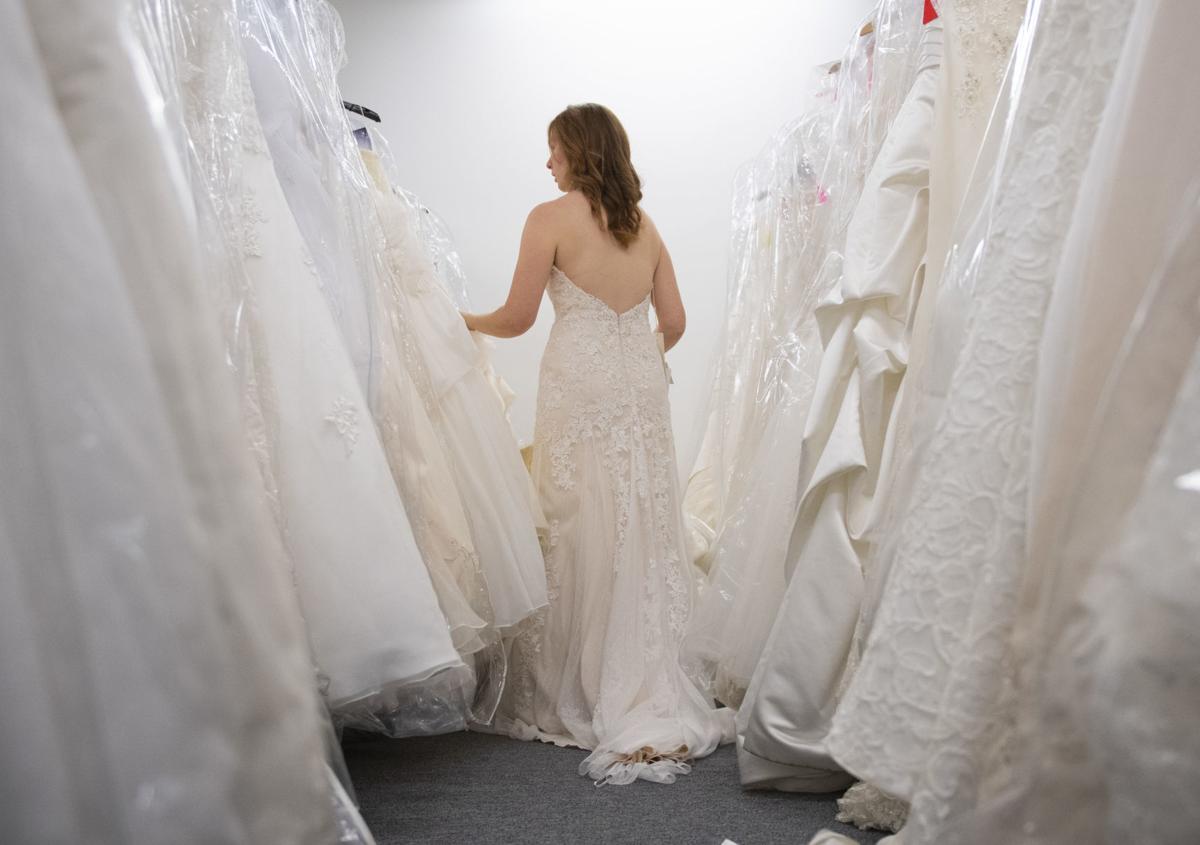 Alexia Tanski, of Frederick, searches for another wedding dress to try on inside the Brides for Haiti shop. 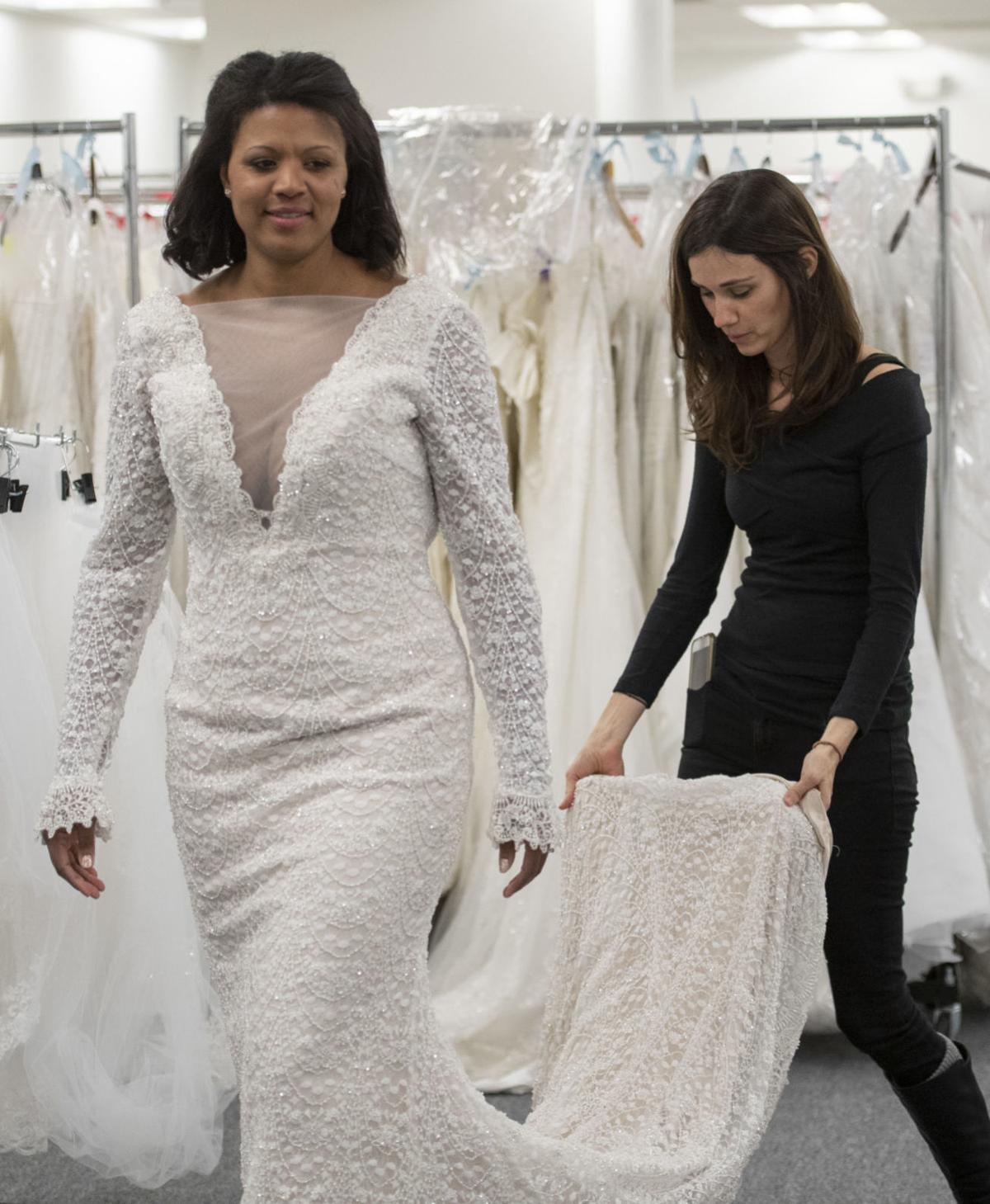 Laura Wright, co-director of Brides for Haiti, carries the train of a dress modeled by Ashley Vayal, of Poolesville. 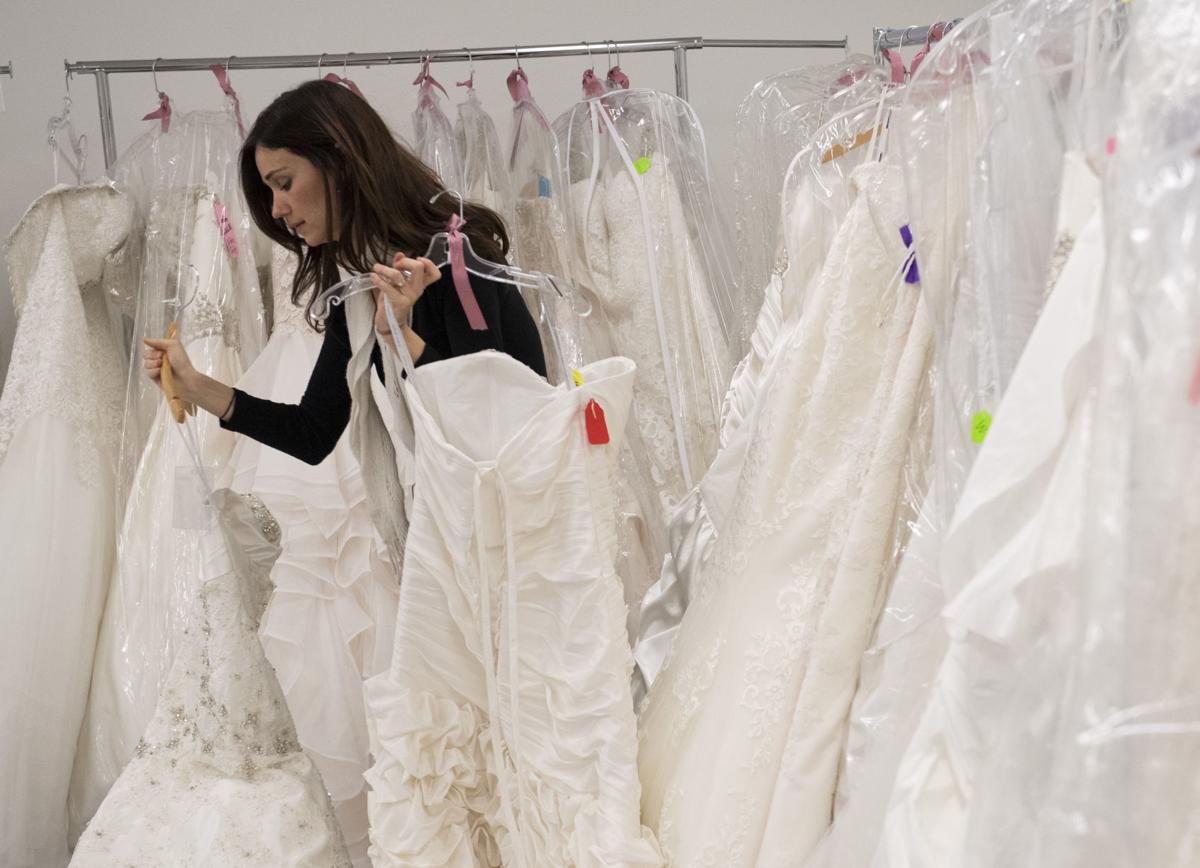 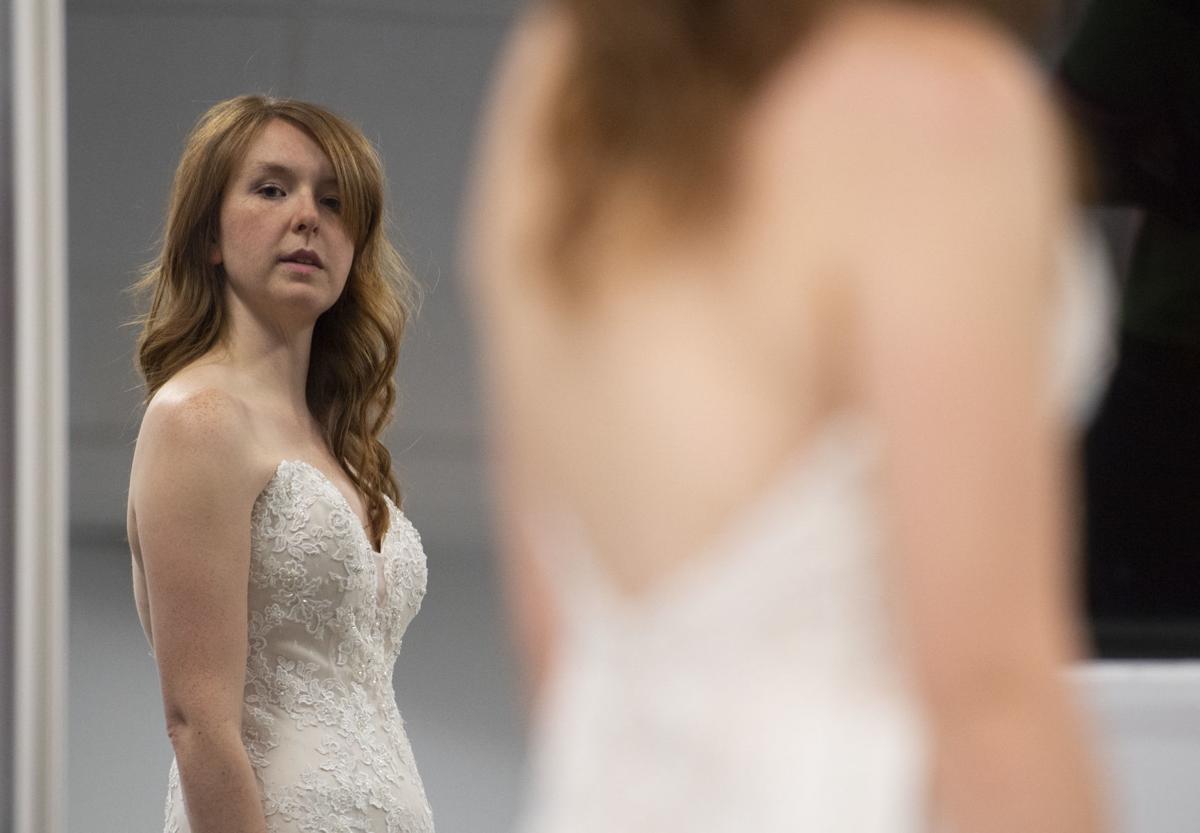 Alexia Tanski, of Frederick, looks at herself in the mirror as she tries on wedding dresses at the Brides for Haiti shop.

Alexia Tanski, of Frederick, searches for another wedding dress to try on inside the Brides for Haiti shop.

Laura Wright, co-director of Brides for Haiti, carries the train of a dress modeled by Ashley Vayal, of Poolesville.

Alexia Tanski, of Frederick, looks at herself in the mirror as she tries on wedding dresses at the Brides for Haiti shop.

Bride-to-be Deborah Cogan was on the hunt for the perfect wedding gown late last month for her June wedding at St Mary’s Brides for Haiti Under the Patronage of St. Philomena in Frederick.

She decided to go solo for the shopping trip, and appreciated the help from the nonprofit’s co-director, Patti Bohr, who both selected dresses and helped Cogan slip into some gowns.

Cogan, 49, said she found out about Brides for Haiti through an online wedding magazine and decided to make the trek from Baltimore to see the selection.

Brides for Haiti is a fundraising mission that has grown out of St. Mary’s Catholic Church and Shrine of Our Lady of Fatima in Montgomery County. Nearly half of the funds raised through selling gowns benefit St. Joseph’s Catholic Church in Carcasse, Haiti, which is in the mountainous region on the southwest coast of the country.

Cogan said she liked the idea that buying a gown would benefit those in Haiti.

“I think bridal gowns are outrageously expensive, to begin with,” she said after slipping on a gown. “I like the idea that at least if I’m going to spend that money, it’s going somewhere.”

Laura Wright, the other co-director of Brides for Haiti, said the organization began in 2008 as an outreach project with some of the female parishioners who invited brides-to-be into their homes to try on dresses. The women also sold gowns at shows. Her mother, Susan Jamison, founded the project. In 2018 the group was able to move out of the homes of the members into a professional space on Thomas Johnson Drive in Frederick. A church member donated the space.

Unlike traditional wedding shops, Brides for Haiti does not deal with gown designers or manufacturers directly for their merchandise.

“We drive up and down the East Coast and get these gowns from generous boutiques, who basically have to get rid of their inventory every so often and buy new gowns,” Wright said.

Hundreds of dresses are arranged in the Frederick boutique, with new stock frequently added to the racks, and sold for what staff members called “happy prices.” Dresses range in size from 2 to 26. There are also veils, jewelry, and coffee from Haiti for sale. Wright said about 43 percent of sales from the shop benefit Carcasse directly. The rest of the profits are used to cover overhead such as bills and commissions for sales staff.

Giving backJack Reid is the coordinator for the Haiti Twinning & Projects at St. Mary’s Parish, which oversees the church’s mission in Haiti. The program is called “Haiti Twinning” because St. Mary’s in Maryland and St. Joseph in Haiti are considered “twin” parishes. He said the money raised through the mission has helped with the infrastructure of Carcasse. The town’s population is roughly 24,000.

“The main thing we have been able to pay for are the teachers at the school and for the rectory,” he said recently in a telephone interview.

The current project, Reid said, is paying for St. Joseph’s Catholic Church in Haiti. The church was destroyed during Hurricane Matthew in 2016.

“This church is much more expensive than anything we have done,” he said.

St. Mary’s Parish raised monies for its mission in Haiti through a variety of fundraisers, Reid said. But, he said, Brides for Haiti has been a large contributor to the mission’s finances.

Through his involvement with the mission, Reid has visited Haiti several times. And for him, the money is going to a worthy cause. He said visiting Haiti “gives you a new appreciation for what you have.”

One bride at a timeAlexia Tanski, of Frederick, was another bride-to-be who was searching for a dress last month for her May 24 wedding.

Although the 27-year-old said she already bought her dress for the big day, she said she wasn’t in love with it. After seeing a few Facebook mentions of Brides for Haiti, Tanski thought she would give it a try.

“I figured that if I was going to potentially buy a second dress I may as well go someplace that would benefit another group or charity,” she said.

That evening marked her third time at Brides for Haiti and Tanski said she still hadn’t found a dress that she wanted. Because the inventory is constantly updated, she said she still hoped to find a dress.

“I have a better idea of what I’m looking for every time,” she said.

Bohr said moving Brides for Haiti to the Frederick location has turned it into a true boutique experience for the women. She admitted that during in those cramped beginnings of showing the gowns from the homes, the process wasn’t nearly as enjoyable as it is in the space the organization has now, which includes seven dressing rooms with doors.

“It’s wonderful dealing with the brides and it’s so much more fun,” she said. “You get them happy and they know they’re doing something good for Haiti. It’s a win-win. It’s something really nice.”

Bohr said she likes being able to care for the brides.

“They don’t feel pressured. They feel relaxed. They get to have fun doing it, “ she said.

Wright said she wants the experiences to be memorable.

“We want them to feel like they can afford a really beautiful gown and be happy with supporting the mission,” she said.

Find Brides for Haiti on Facebook by searching for St. Mary's Brides For Haiti Under the Patronage of St. Philomena