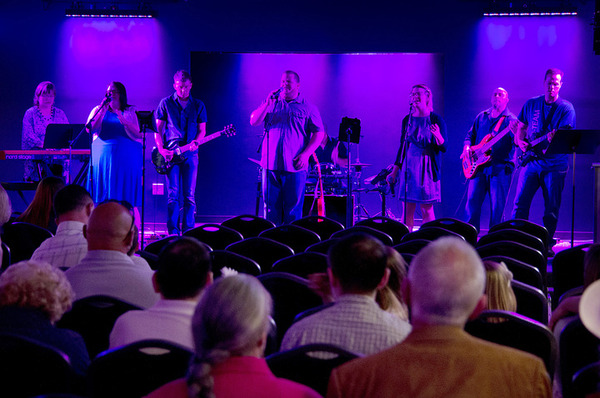 A new type of church service called The Basement was inaugurated Easter Sunday at the Frederick Church of the Brethren. Leading the worship team is Brian Messler, center, associate pastor for worship and witness. 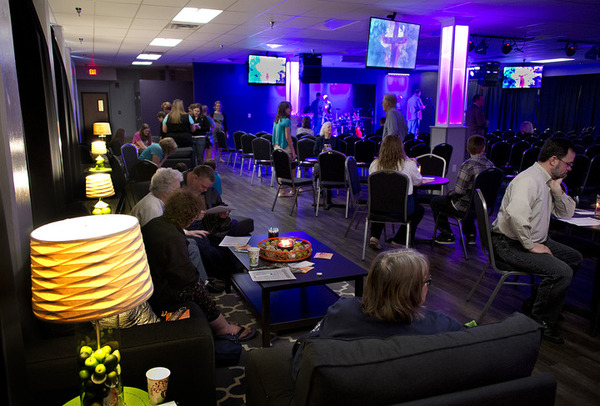 The Basement’s casual, coffeehouse-like atmosphere is geared to appeal to first-time churchgoers, featuring informal seating on couches and at tables.

A new type of church service called The Basement was inaugurated Easter Sunday at the Frederick Church of the Brethren. Leading the worship team is Brian Messler, center, associate pastor for worship and witness.

The Basement’s casual, coffeehouse-like atmosphere is geared to appeal to first-time churchgoers, featuring informal seating on couches and at tables.

The Basement is designed to be casual, inviting and have a relaxed atmosphere.

“There is sort-of a coffeehouse feel,” said Jenn Dorsch, director of communication for the church. “We’re looking for a safe place for people to worship in just a comfortable, casual way.”

The service took place in the recently renovated multipurpose room, which has something of a theater or club atmosphere with its black curtains and couches and pillars with purple accent lighting.

The Easter worship began with a video greeting and a live performance of Christian rock, followed by a videotaped sermon from Pastor Paul Mundey, who spoke of the Easter story as an allegory for overcoming failure and doubt and called on the congregation to have faith and encourage each other.

The Basement will feature video sermons because the church’s pastors will be delivering a live, traditional sermon upstairs at the same time.

The church hopes that offering a less formal setting for its services will encourage more people to visit and join the congregation, particularly those who may have once been church regulars but stopped going, Dorsch said.

Several of the congregation were drawn in by the fresh approach to worship.

“It’s casual, it’s laidback, it’s inviting,” Sherie Johnson said. “I can be myself.”

Lauren Lipps, of Frederick, has been a lifelong member of the Church of the Brethren.

She said she enjoyed the music and the more interactive, conversational tone of The Basement.

The Basement is Christian worship in a casual environment.

Church of the Brethren

Carrotman...Jesus was WITH his followers. I am speaking of THE anti-christ. Not they are anti christian. Computers, cell phones, social media, movies, etc. don't listen, touch, and otherwise relate in a meaningful way.

"Why'd you choose such a backward time and such a strange land?
If you'd come today you would have reached a whole nation
Israel in 4 BC had no mass communication..."

save1more4jesus. Yes, you are right, those items in and of themselves cannot interact; however, those who use them can - just like we are doing now. I think we can use a variety of means to share the gospel with others and honor Jesus at the same time. Doing that face to face, hand to hand is always the best way.

I was there, there were a lot of empty seat, but a lot of people were there as well. Around 150 people or so for a new service is pretty awesome! Glad I went and will be back. Perhaps I will see you there...

Fair enough, but there were 6 services held at that church yesterday, so I doubt those seats will stay empty for long.

[smile] There were many people these yesterday, pretty glad I am part of a growing church. I am looking forward to going back this weekend. If you look at the picture, it shows perhaps 30 empty seats out of the 200 or so set up. Interesting how people perceive things...

Lots of seats means lots of space for new visitors. :)

All VIDEO has an anti-christ feel. Pray it doesn't.

The only video is the message because the pastor is preaching upstairs, everything else is live. Not sure how that is anti-Christ...