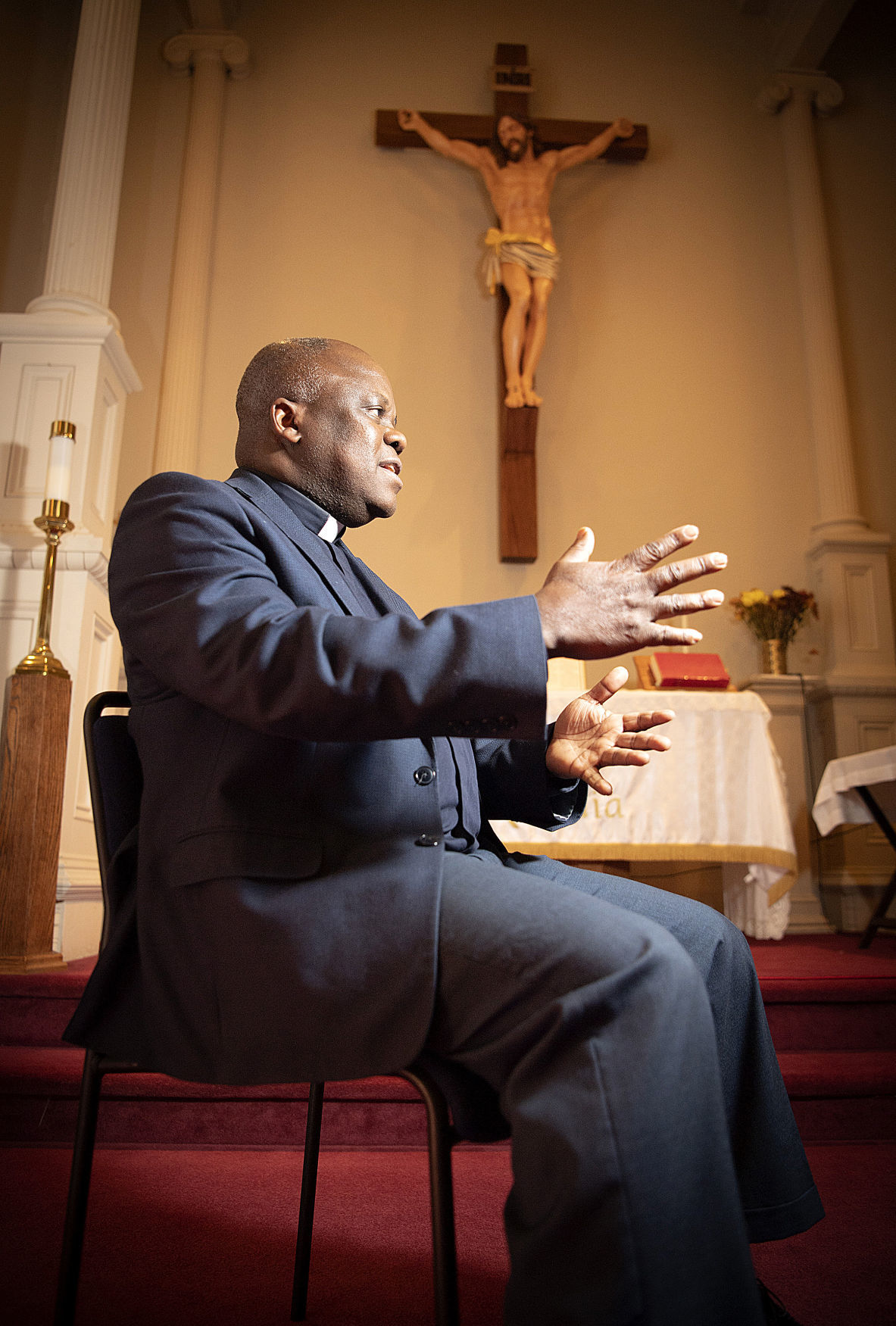 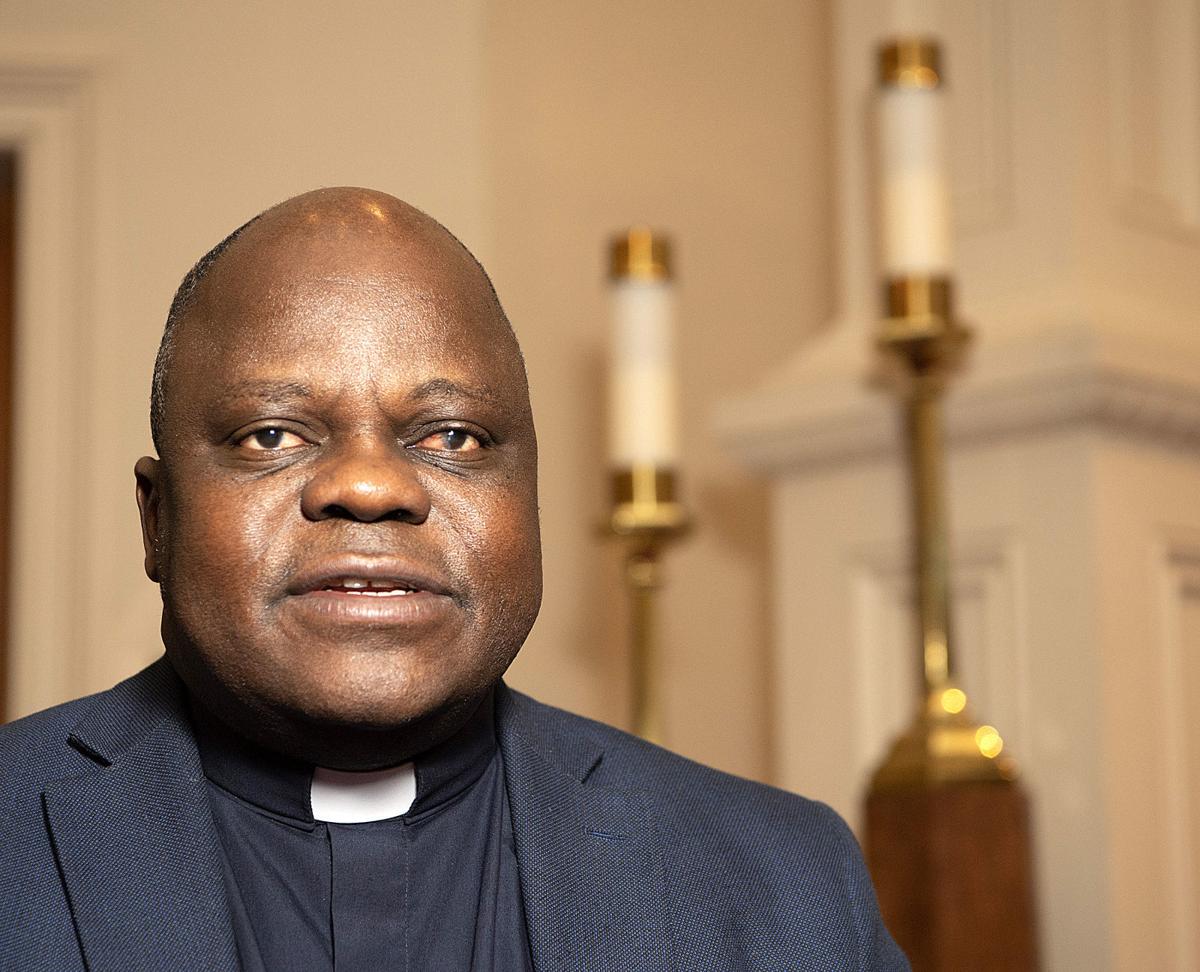 The Rev. Pothin Ngyele of St. Michael the Archangel Anglican Church remembers the first time he saw a missionary priest.

He was 7 years old when the priest came to Ngyele’s small Congo village. In the 1970s, the Catholic missionary had many priests.

“He traveled twice a year to come to our area,” Ngyele said recently while sitting in the historic church south of Frederick, which the congregation rents from St. Joseph-on-Carrollton Manor next door.

“He didn’t have a car, so he would have to probably travel 100 miles, sometimes on foot,” Ngyele added.

The priest was Father Bernard, a tall Belgium man with a long beard, dressed in white.

“It was the first time I saw a white person,” he said noting that Congo, like Belgium, is French-speaking.

Although his father was a teacher as well as a Sunday school teacher, Ngyele said it was the first time he had celebrated a Mass.

“It was just so fascinating to see this tall man standing in front of everyone and he would say one thing and everyone would respond,” Ngyele said.

She also warned him that because he didn’t listen that well at home, he couldn’t handle an hour in the seminary. That’s when she told her son, “If you want to become a priest, I want you to become a good child in the house first.”

Ngyele listened to his mother, but he would take his younger sister behind the house and try to act like Father Bernard and celebrate Mass.

“I started practicing. Of course, I was just 7 years old. To me, it was a fantasy. I had no idea what it was like to become a priest,” he said.

His journeyA year later, Ngyele joined the choir for the youngest members and started to go to church every Sunday. His belief that he should be a priest didn’t waver. By the time he had reached what in the U.S. would refer to as seventh grade, Ngyele had decided to go into the seminary.

“I basically left my parents’ house when I was 12 to go to what they called a minor seminary,” he said.

Ngyele explained that in the Roman Catholic Church there are major and minor seminaries. The minor seminaries were for high school boys who expressed an interest in the priesthood. The one he attended was roughly 70 miles from his home, which because of lack of transportation he had to walk to. But they had breaks to return home for Christmas, Easter and summer.

“It was so obvious to me that becoming a priest was what I was going to do for the rest of my life,” he said.

He classes were regimented. Students awoke at 5:30 a.m., had to be at the chapel by 6 for morning prayers, 7:15 was breakfast, then 8 a.m. to school, noon was dinner, which was followed with a nap until he had to be back in school at 2 p.m. Then from 4 to 6 p.m. it was time for sports before the day was over.

Once he completed the minor seminary, he entered a major seminary where he prepared to take his vows as a priest. In Roman Catholicism, he explained, you could enter priesthood for the diocese or become a priest for the congregation missionary. Wanting to follow Father Bernard’s footsteps, Ngyele wanted to do missionary work. It was 1986.

But Ngyele wasn’t a priest yet. He said it takes a long time before a person becomes ordained. The first year is a time of training for potential priests and they see if priesthood is the right fit. Then in 1988, he went into novitiate, which is a 13-month period for those who want to take a vowed religious life. It was then that he dedicated his life to prayer, work and study.

That year, Ngyele said he committed to his first of three vows. The first vow is obedience to the priest because they are there to help you grow, the second is a vow of poverty meaning anything he would possess now belongs to the church, and the third vow is a vow of chastity where he would keep the purity of his body to himself.

He moved from Ifwanzondo to Kinshasa, the capital of the Democratic Republic of Congo, to continue his studies. He had to complete graduate school in philosophy and theology before he could be ordained as a priest. He was 21 years old by then. Then he went onto pastoral training that allows potential priests to lead a parish with an ordained priest to learn the ropes.

He did what is called his pastoral year in a remote part of Congo. There he taught math, Latin and geometry.

Two of the first three students he taught during his first year as a teacher were in seventh grade. Today, Ngyele reports that one of them is a medical doctor, another became an ordained priest last year, and another became a nun.

He came back to Kinshasa for four more years of theology. And on April 9, 1996, Ngyele was ordained a deacon. Three months after that, he was ordained as a priest, on July 28, 1996.

Because they needed someone to be the dean of the school, his superiors sent him to get his master’s degree in philosophy. He was also earning his master’s in divinity. In the meantime, Ngyele was assigned to be a chaplain at a prison.

Ngyele made his way to the United States in 1990 where he earned his doctorate at Catholic University in Washington, D.C. When he arrived in the U.S., he had to learn English. He knew more Italian and German. Today, he speaks seven languages.

He said those first years were frustrating, as he learned the language and had to rely on the text he had prewritten to help him speak to the congregation.

“It went against my nature. You need people to feel the energy when you give a sermon,” he said.

A home at St. MichaelIn 2009, Ngyele moved to Frederick to join the rector, the Rev. Arthur Woolley, at St. Michael. When Woolley retired in 2014, Ngyele became the new rector. St. Michael is Anglican Catholic, which was a change since Ngyele had been educated in the Roman Catholic Church. But for him, there is no real difference.

“I’m doing a ministry that I wanted to, so I’m very pleased to be serving in this church and serving in this community,” he said. “We still live by the same creed and we actually have the same Mass. So to me, my relationship with God and my ministry are not different.”

At St. Michael, Ngyele serves about 40 families. He said they all have different races and backgrounds, most of them are retired, but they also have younger families and children.

He said his church offers “faith, family and community. These are the three cores of our identity and our ministry.”

He said they could have a nice week at the church, but if they stayed in the building they would not be “following the Great Commission of Christ.”

“Although we are a small operation, we are involved in the life of the community,” he said.

The church collects blankets for the homeless, and runs a food bank. Making a difference in just one person’s life is why they do what they do, he said.

“We don’t want to forget that there are people in this town who are in need,” he said.

Along with overseeing St. Michael, Ngyele is also a full-time chaplain with Hospice of Frederick County and Frederick Health Hospital, formerly Frederick Memorial Hospital. To him, that’s an extension of his ministry of the church.

“Those people I serve are not always people of faith. Those who are people of faith aren’t always my religious affiliation,” he said. “But I serve these people, because when I look at them, I see in the mirror the image of God. So for me, I am also the ambassador of this church in the community.”

Looking toward the futureNgyele said he hopes to move from the rented church to a new location, a pastoral care center, in April. He is also a clinical counselor. The site will be named after the rector emeritus Father Woolley.

The center, he said, is like a lab or a “war room” where they will look to see the needs of the community and figure how or strategize to meet those needs.

The center will offer a grief support group for every kind of loss. He wants it to be a place for those who are wounded.

“We want to be that spiritual aim for whoever are seeking those solutions,” he said.

In the meantime, Ngyele said is that St. Michael is a traditional church and continues with Jesus Christ’s teaching.