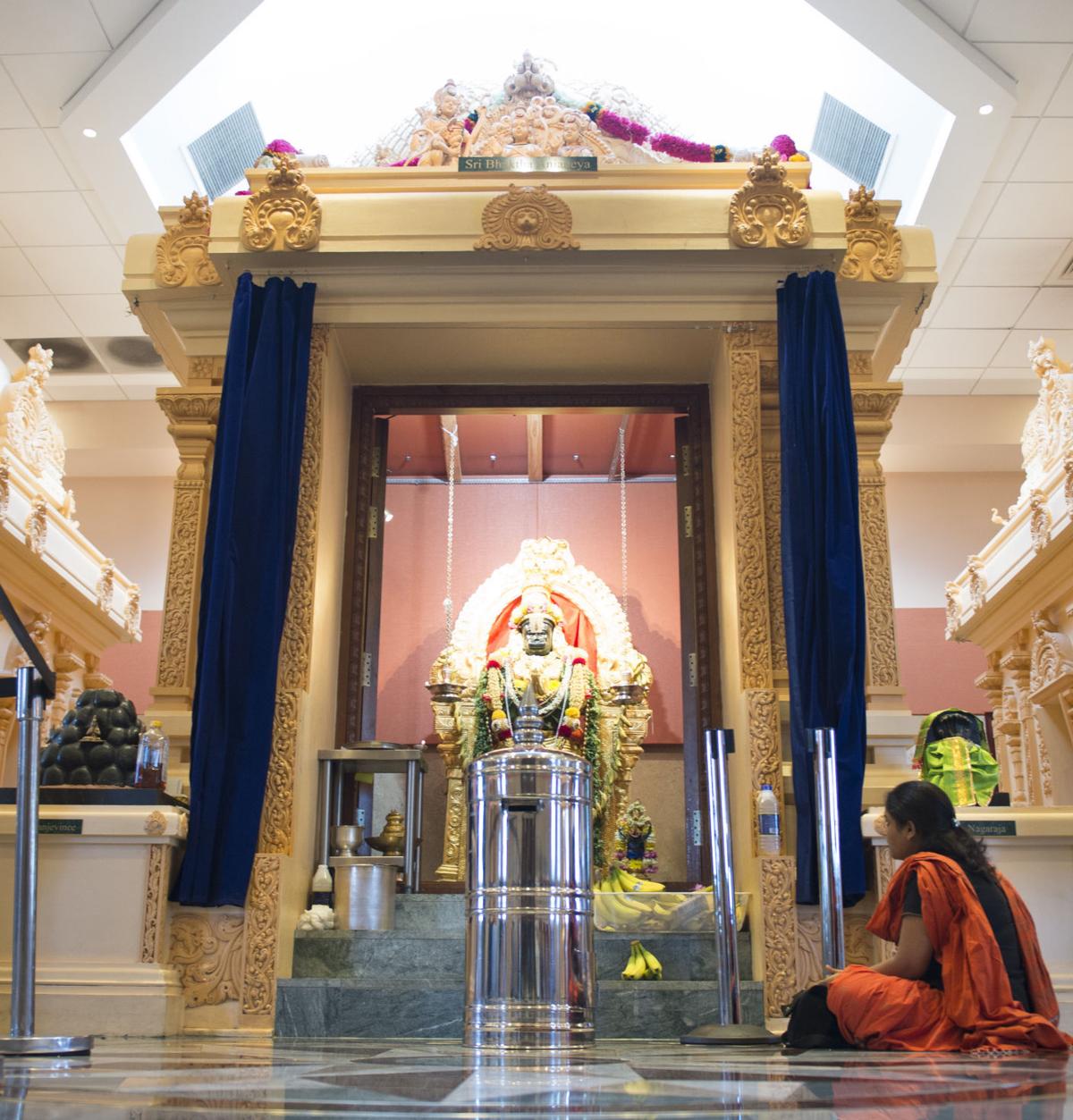 A worshiper sits inside the Sri Bhaktha Anjaneya Temple, built along Md 80 in Ijamsville. 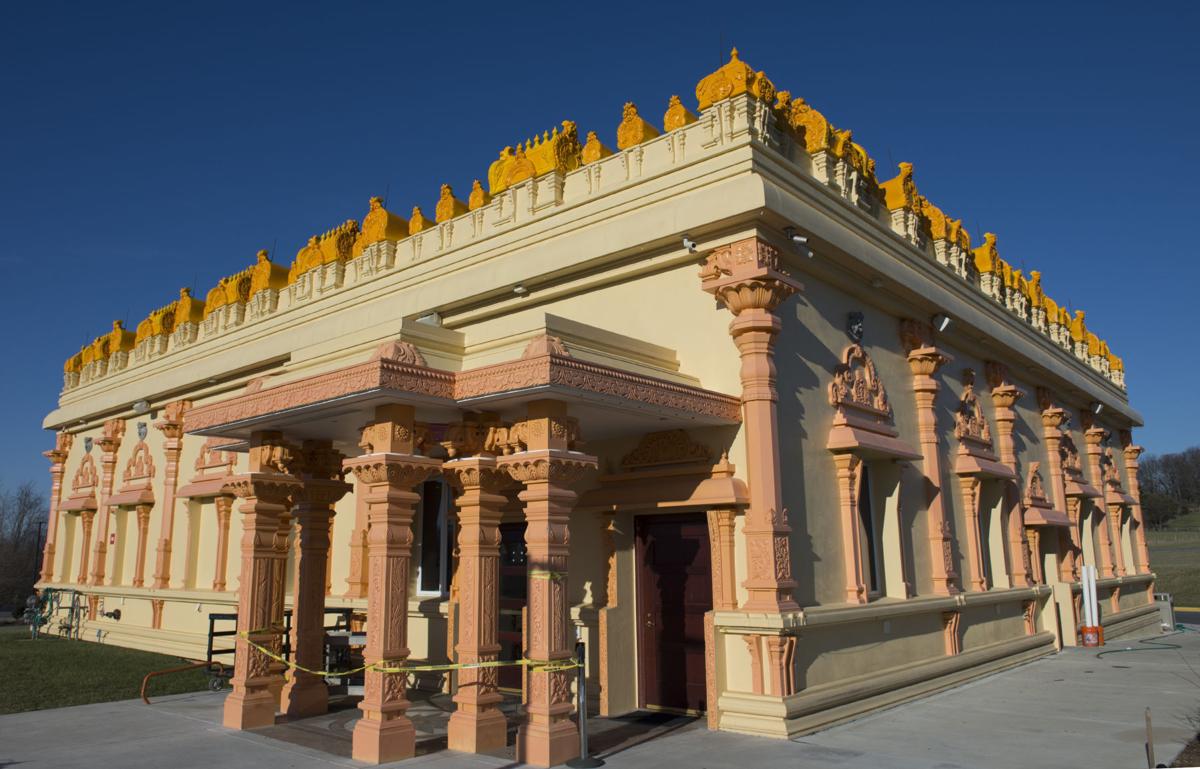 The Sri Bhaktha Anjaneya Temple is located along MD 80 in Ijamsville. 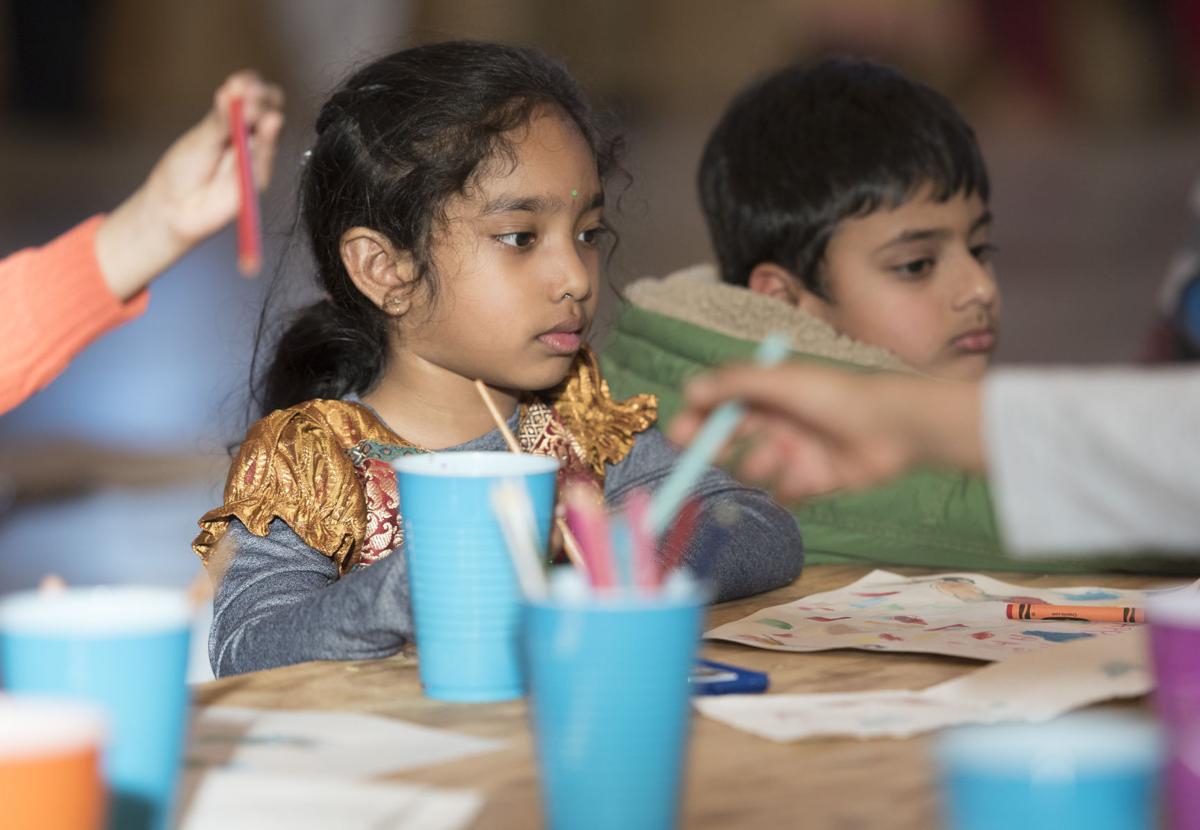 5-year-old Ujwala Laggishetty, of Monrovia takes part in a drawing competition at the Sri Bhaktha Anjaneya Temple in Ijamsville Saturday.

A worshiper sits inside the Sri Bhaktha Anjaneya Temple, built along Md 80 in Ijamsville.

The Sri Bhaktha Anjaneya Temple is located along MD 80 in Ijamsville.

5-year-old Ujwala Laggishetty, of Monrovia takes part in a drawing competition at the Sri Bhaktha Anjaneya Temple in Ijamsville Saturday.

IJAMSVILLE — Shoes piled outside the back entrance were the only signs of life outside the Sri Bhaktha Anjaneya Temple on Sunday afternoon.

But inside, the Ijamsville Hindu temple bustled with activity.

Devotees sat on the granite floor inside the main prayer room, heads bowed and hands clasped as a priest led them through a call and response chant, part of a prayer ritual known as a puja. Others sat at long, cafeteria-style tables in the adjacent community room. Their conversation and the scent of traditional Indian foods prepared in a temple kitchen filled the air.

Hindus are not affiliated with a specific temple. Devotees can worship at any temple they choose. And unlike other faiths, worship is not a regularly scheduled event but an ongoing prayer during which participants can come and go freely, staying for however long they want.

Temple leaders and volunteers say the Ijamsville temple has attracted increasing numbers of worshipers from across the Washington, D.C., metro region since it opened in May 2015.

Five main priests, plus three additional priests, lead prayers and devotions to the Hindu deities daily, although the weekend pujas attract the largest crowds. About 400 visitors come to the temple on any given weekend, according to Srinivasan Jayaraman, a devotee and temple volunteer. For special events or holidays, the temple might see close to 700 devotees in a weekend, Jayaraman said.

The temple offers pujas in seven languages, based on the native tongues of its devotees. The building houses 18 deities, different manifestations of the Hindu god who are worshiped through prayer and offerings of food and gifts.

And as the only temple in Frederick County, the place of worship has played a crucial role in fostering community among area Hindus.

Build it, and they will come

Seshadri Thope, a temple devotee and volunteer, moved to the city of Frederick from India close to two decades ago. For most of those years, before the Ijamsville temple opened, he faced an hour-plus drive to the nearest temple, the Sri Siva Vishnu Temple in Lanham.

The long drive meant his visits to the temple were less frequent, as was the case for many area Hindus. The closest Hindu temples are in Lanham and Potomac.

“We ended up praying at home,” said Chandran Kristhnamurthy, a Frederick city resident and temple volunteer. “That, or sit in traffic on the beltway.”

The Ijamsville temple makes it easier for Thope to attend weekend pujas and drop in on a weekday.

It’s not just Frederick County residents who come to the temple, either. Jayamaran makes the trip from his home in Ellicott City.

Subadhra Narendar travels even farther: from Ashburn, Virginia. She used to attend the Lanham temple but said she prefers the Ijamsville temple because of the friendlier, more close-knit feeling of the community.

Her positive experiences at the Ijamsville temple has prompted her family’s plans to move to Urbana.

Thope isn’t sure whether the temple’s creation spurred Hindus to relocate to the area, but he has noticed an increase in the number of Indian people living in Frederick city, he said. “When I moved to Frederick 18 years ago, I hardly saw any Indian people. Now, I have a lot of Indian friends there.”

Urbana has the second-largest population of Indian natives. There were 455 India natives living in Urbana as of 2015, according to census data.

The Census does not track groups based on religious affiliation. Hindus made up about 1 percent of Maryland’s population in 2014, according to a study published by Pew Research Center based on a sample survey. Frederick County-specific data was not available.

From concept to creation

A group of five priests from the Lanham temple in 2010 put the wheels in motion for the Ijamsville temple, according to Ganesan Gurukkal, one of the priests.

Their initial concept focused not on a specific location but on the designation as a Hanuman temple, created in honor of the Hindu god, Hanuman. Hanuman is one of the most worshipped and revered gods of the faith, but there are few Hanuman temples in the U.S., and none along the East Coast, Gurukkal said.

The process from concept to creation was not without challenges. Gurakkal named finding land to house the 5,000-square-foot temple as one of the hardest parts.

The priests found the property off Fingerboard Road with the help of a local real estate agent. The sprawling 43 acres overlooking the Ijamsville countryside was a perfect choice because of its central location for Hindus along the Interstate 270 corridor and also its agricultural zoning, which permits religious use.

The Frederick County Planning Commission in 2008 approved plans to build an Evangelical Lutheran Church on the property, but the plans never came to fruition, according to applications filed with the county planning department.

Those same approvals were transferred to the 5,000-square-foot temple planned under phase one of the project, according to Tolson DeSa, a planner with the county’s development review department. The

The second phase, for a second, 51,000-square-foot temple and five small homes for the priests, was approved in 2012 but has not been built.

The approval process was slow, the details painstaking. And that was just the beginning.

Construction involved American architects and contractors partnering with Indian artisans. The artisans carved the intricate shrines to the Hindu deities and hand-shaped the decorative elements that adorn the interior and exterior building.

Unlike temples in India, which are rarely redone once initial construction is completed, the Ijamsville temple employs two full-time Shilpis to maintain the cement structure, according to Bragadeesh Balasubaramanian, temple manager and an assistant priest. The cold and intemperate climate of Maryland, compared to India, necessitates more maintenance, he said.

Despite the long, arduous process, Gurukkel said he never doubted the temple would be built. He named divine intervention as the root of the idea, and with that guiding force, he knew the vision he and the other priests shared would become reality.

Temple leaders faced none of the religious persecution others claimed when attempting to build a place of worship for their respective faith communities.

A Muslim faith group interested in building a mosque and convention center on a Walkersville farm was shut down in 2008 after town officials denied the zoning exemption required. The town paid a $4.8 million to settle the religious discrimination lawsuit that resulted from the decision.

Another Islamic group claimed religious discrimination was the reason for the county’s denial of a proposal to build a worship and educational center near Buckeystown in 2000.

Asked if anyone complained when Hindu leaders introduced the temple plans, Balasubaramanian said “not really.”

“We recognize we are at the heart of a residential community, and we want to have good relations,” said Meera Tiruvenkata, a temple volunteer who lives in Frederick city.

Tiruvenkata also emphasized that the temple is open to anyone, not just Hindi devotees. Frederick County Public Schools students, and those in world religions classes at Frederick Community College, have come to the temple for school projects.

In addition to pujas, the temple offers a host of cultural activities, geared mainly toward children but open to all ages and faiths. Classes teach everything from Sanskrit, the ancient language of Hinduism, to traditional dances and yoga.

In recognition of Holi, a spring festival celebrated in India and Nepal, the temple held a drawing contest for children. The Saturday event drew more than 50 participants, according to Jayamaran.

Jayamaran and Thope, who both have children, emphasized the benefits of exposing their children to the spiritual and cultural aspects of their beliefs, in addition to American customs. “It’s good for them to see both, all of the different customs,” Thope said.

Of their Hindu education through the temple, he added, “This way, when they go to India, it’s not a surprise.”

Temple leaders originally anticipated they would complete the second, larger temple on the property by 2019, according to the application submitted to the county planning department. Though the designs are finalized, the timeline for funding and actually building the 51,000-square-foot temple remain uncertain, Balasubaramanian said.

The larger temple, complete with a 36-foot statue of Hanuman, would cost $20 million, according to an estimate from several years ago, Balasubaramanian said. That’s 2.5 times the $8 million cost of the first temple.

Funds for the project come primarily from donations of the devotees, he said. Asked how much money had been raised toward the second building, Gurukkel said “not much.”

But he and other temple leaders maintain their commitment to seeing their vision for phase two of the project to fruition. Just as in the first phase, he said the divine will would make it happen.

Devotees were also supportive of the future project.

In the meantime, the existing temple offers a place to worship, to gather and to celebrate their faith.

“It’s a place to recharge, spiritually,” Tiruvenkata said. “You go and you feel reawakened.”