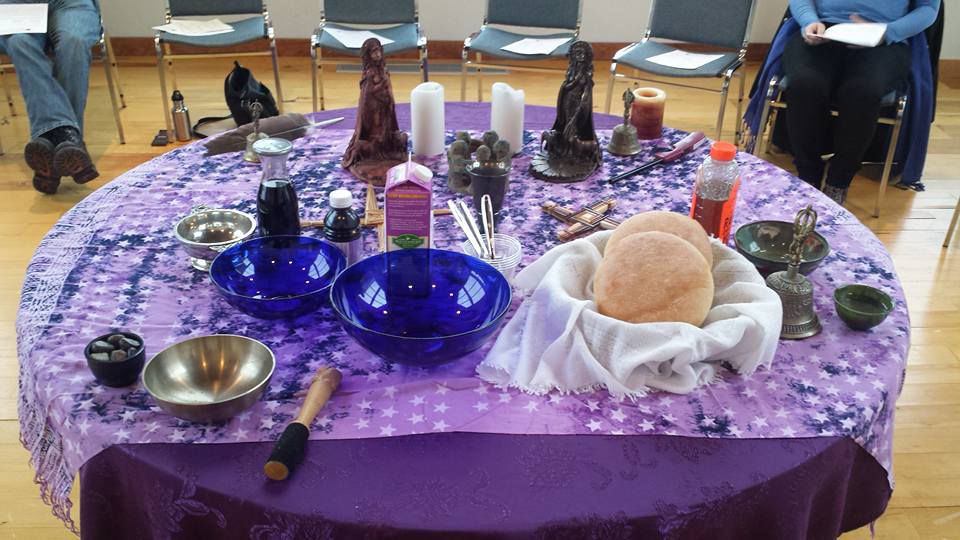 An altar set up for a pagan ritual as part of Frederick CUUPS. The local pagan community has grown in recent years. 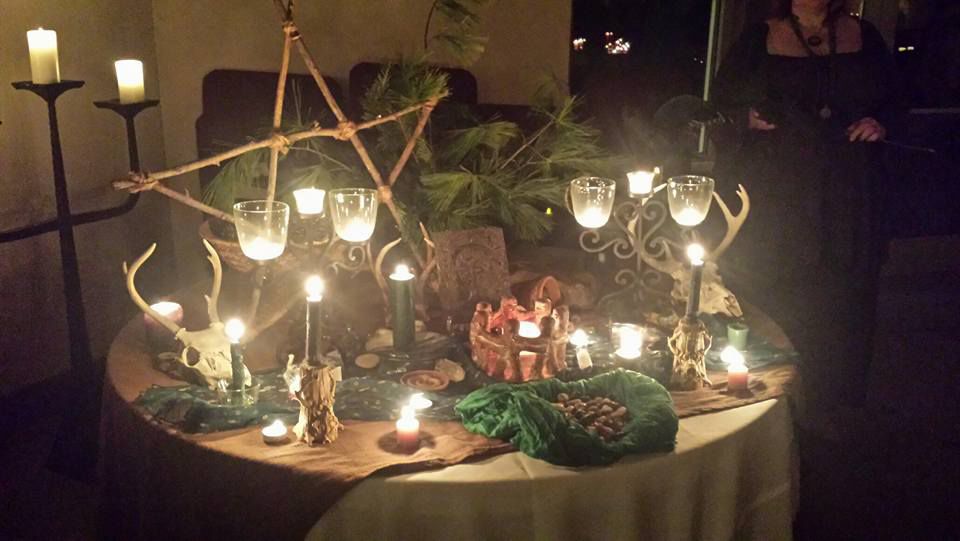 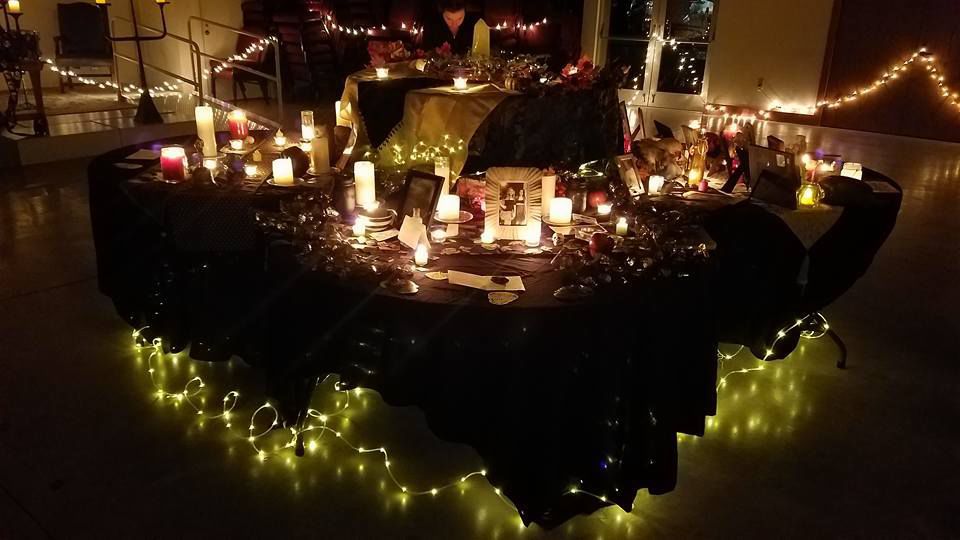 An altar set up for the Samhain celebration, a traditional Gaelic festival linked with modern celebrations of Halloween. 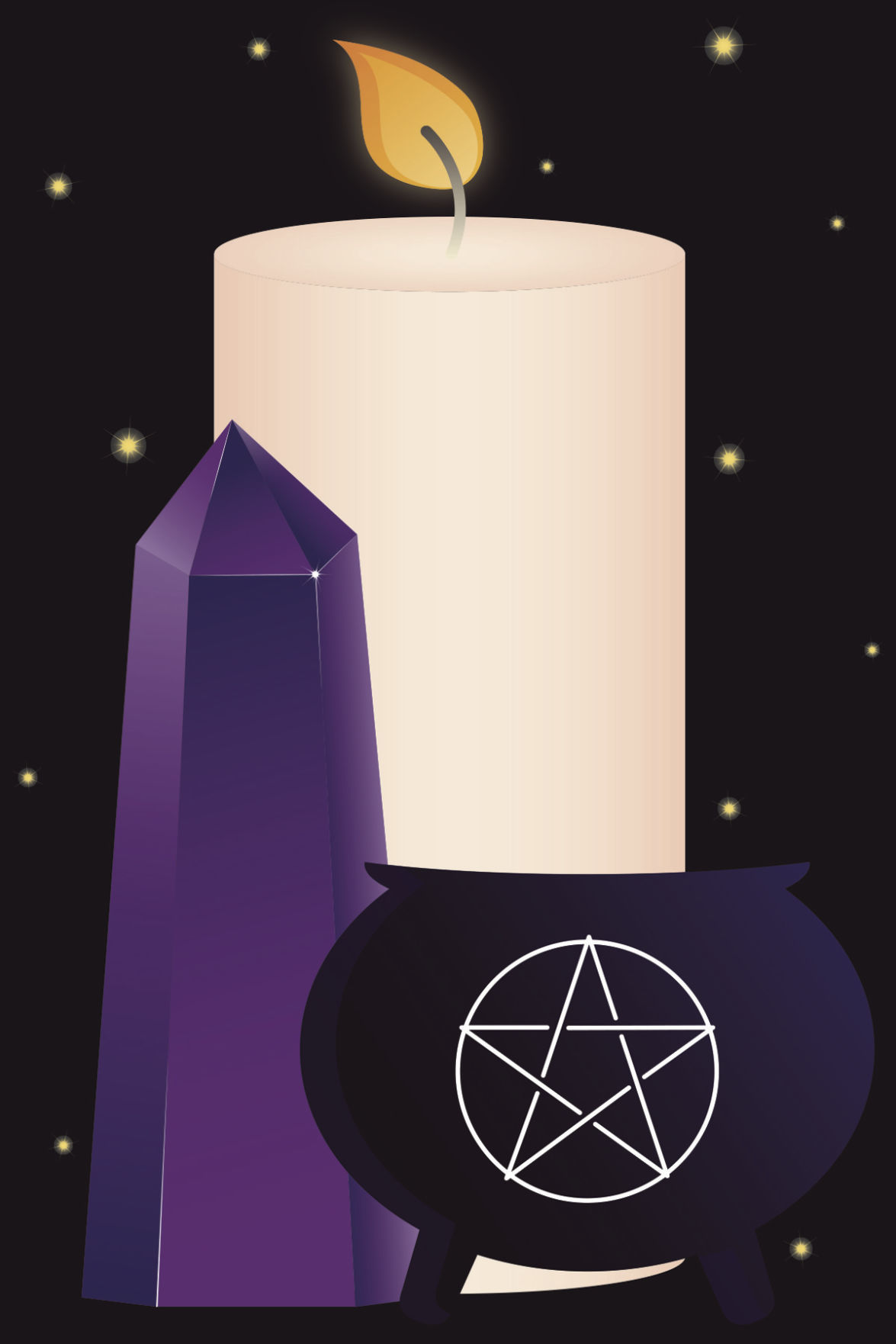 Many Pagans maintain an altar in their own home. Altars can contain a variety of items, including candles, bowls, statues, lights, cauldrons, crystals and runes.

An altar set up for a pagan ritual as part of Frederick CUUPS. The local pagan community has grown in recent years.

An altar set up for the Samhain celebration, a traditional Gaelic festival linked with modern celebrations of Halloween.

Many Pagans maintain an altar in their own home. Altars can contain a variety of items, including candles, bowls, statues, lights, cauldrons, crystals and runes.

With those misconceptions aside, said Irene Glasse, organizer of the local group of pagans, people can see the diversity of the religion.

“Most pagans look perfectly normal,” she said. “They look like you or me or anyone. And we run the gamut in terms of what sort of professions we have. We are nurses and doctors and lawyers and checkout clerks. We’re everything.”

Paganism is an umbrella term that encompasses a variety of religions, the majority of which are polytheistic and have strong connections to the natural world. The religions draw on a strong sense of ancestry or lineage, which is why some believers draw from Norse, Greek and other ancient mythology. Followers can worship a goddess or god, or multiple, and speak of being chosen by their deity.

In the county, the Frederick Covenant of UU Pagans have met at the Unitarian Universalist Congregation of Frederick for nine years, and the organization is about 15 years old.

The pagan community has been present in the region since the 1960s, Glasse said. In Frederick, the community is growing — this year more than 550 people participated in the annual Pagan Pride Day in Frederick County. The increase is a combination of more people becoming interested in the religion and a society that has become more understanding.

People who have been marginalized by other religions can find a home in paganism, Glasse said. The religion offers spirituality without many of the socially constricting rules.

“People have a deep need for a spiritual connection,” she said, “but a lot of the traditional, more mainstream forms of religion began to ethically counter our understanding of social mores and the changes that we as a larger culture were undergoing.”

‘Magic is a prayer’

Pagans tend to be more open-minded than those of other religions, said Tamara Curry, a Frederick CUUPs member. The 54-year-old transgender woman first expressed her true gender identity on the playground as a 6-year-old Catholic school student. She was chastised by school officials and sent to three years of “Catholic conversion therapy.”

“It took me a very, very long time to find myself again,” Curry said.

Curry had her first encounter with her goddess while finishing her college degree in history. In paganism, she feels a deeper spiritual connection than anything she experienced in 16 years of Catholic schools and mouthing the ritualistic words, she said.

Her goddess is the Morrígan, the queen of death and battle in the Irish tradition. Curry said she has modeled her life after the Morrígan, becoming a black belt and competing as an archer. Much of what she has learned about Wicca — a pagan witchcraft that worships a goddess or god and follows the natural cycles of the sun or moon — has come from reading and apprenticeships, she said.

Like many pagans, Curry maintains an altar in her home. Many people have misconceptions when pagans talk about magic, when really, there are many similarities to prayer, Curry said.

She said she casts runes in times of need, using the stones to interpret messages. However, pagans are responsible for their own lives, unlike those in other religions, Curry said. Their prayers are not asking a deity to intervene on their behalf. There is no “Jesus, take the wheel” moment, Curry said.

Instead, pagan prayers are for a boost of clarity, insight or strength. Having studied many religions through her history degree, each faith comes down to universal rules, Curry said. In Christianity, it is to love one another as Jesus did. In Buddhism, it is to love the world as a mother loves her only child. Among witches, the Wiccan Rede states, “An’ ye harm none, do what ye will.”

“I think it’s a matter of identity,” Curry said. “Underneath it all, we’re all worshiping the same thing. It’s just how we view it.”

A Connection to the natural world

Devin Gaither sees those similarities, too. The 29-year-old grew up in Hagerstown in an agnostic household, where she was encouraged to learn as much as she could.

“The more I read, the more I saw how much different religions really had in common with each other,” Gaither said. “I feel like a lot of people spend time arguing about all the differences, when really there’s this primal foundation that has the label of ‘animism.’ That’s really what’s important for all us, especially in a world today where we’re really so fragmented and arguing about our differences.”

Since her late teens, Gaither has been practicing animism, a religion that sees all things as being alive and connected with the natural world. She was drawn to the idea that all objects and creatures have a spirit, one of the central tenets of animism.

Gaither said she sees lots of undercurrent themes of animism among pagans, along with a disconnection from the natural world in today’s society.

Gaither works as a software developer, so she said it can become easy to get lost in experiencing the world through a digital lens, not to mention the pervasiveness of social media. Her practice includes a lot of solitary contemplation, she said. She turns to nature for inspiration and answers to questions. She tries to spend as much time as possible in nature, as well as traveling, she said.

“Instead of just reading about things and places online, I try to just go there and see and experience them myself,” she said.

The internet has helped expand the local pagan religion. The online community has made an “incredible difference,” Glasse said.

Before the internet, people interested in paganism had to get lucky in finding communities or other believers, Curry said. The solitary nature, and diversity of practices, of the religion does not lend itself to forming large groups. Part of this solitude was a historic survival mechanism in times, like during the Roman Empire, when openly practicing was met with persecution, she said.

The social consequences of being openly pagan are much milder today than in previous decades, Glasse said. However, the D.C. area presents some challenges to pagans because long-held misconceptions about the religion persist.

“There are still a lot of people who try to stay in the broom closet, especially in this area, where we have a lot of people who work for the federal government,” Glasse said. “The wrong person finding out that they have an alternative belief system can really go sideways for them in terms of their employment.”

On Nov. 10, the Frederick Covenant of UU Pagans will celebrate Samhain. The group celebrates eight holiday rituals a year and meet once a month at the Unitarian Universalist Congregation. Samhain, a traditional Gaelic festival, is associated with Halloween for its recognition of the dead and the belief that the barrier between the world of the living and that of the dead is thin. It is the most well-known ritual of the religion that, overall, is growing more well-known.

Curry likened the resurgence of paganism to a quote attributed to pagan author Orion Foxwood: “When the world needs witches, She makes witches. Why do you think there are so many of us now?”

Isn't it hard enough to believe in the Trinity and Immaculate conception without going to paganism.

“Pagans do not worship the devil.“

Well, of course not. Satan is part of Christianity. Paganism isn’t.

Yes, but Christians don't worship the devil. The devil is necessary to keep everyone in line. It's the old "carrot and stick " approach. Do as I say and you will be rewarded. If not you go and join the devil.

Interesting article. i know the Pagan MC organization in our area. They are really a fun loving group once you know them. The organization consist of mainly blue colored tradesmen with a mix of professional ones to. Grouping in packs in public locations they mix in and get along great with other MC and people that do not show racism toward their organization. In a pack of 6 traveling with the tradesmen 2 is called the clean up crew. When the unreasonable people start the trouble talking as I`ve witness and become offensive the Pagans ignores remarks given but when hands on by the public happens well!! they play ruff. Not once have I heard of such a culture as this article describes insisting as a member of the Pagan MC. Most go to church of their religious belief and all the religions believe in God all mighty and Jesus Christ our Savior. To each their own and if they firmly do not believe in the Lords that created us so be it. I will not Judge anyone if I can help it, that is God`s job to do so [smile]