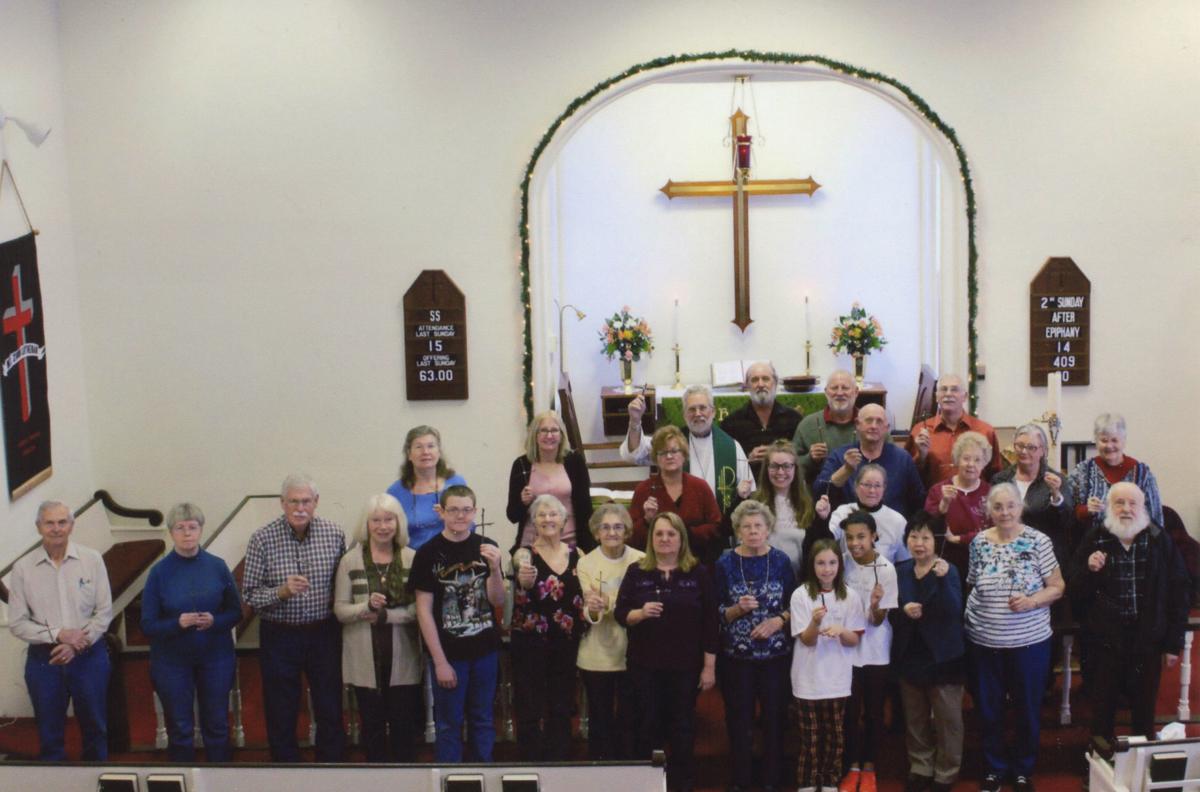 Members of Mount Zion congregation posed in the church’s altar on Jan. 20 to kick off the anniversary of the church’s 200th year. 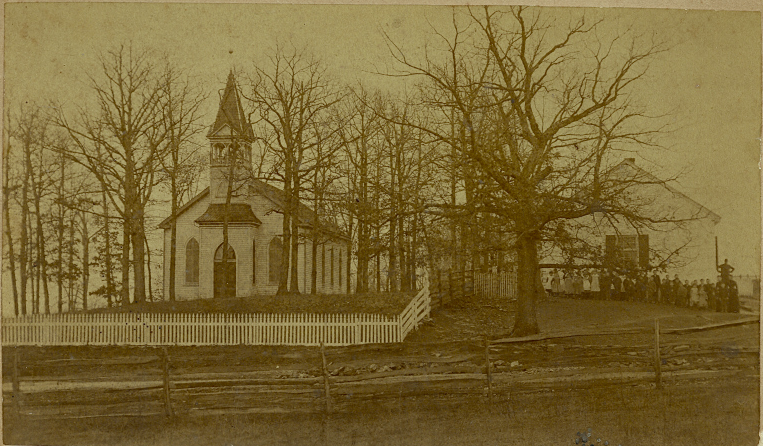 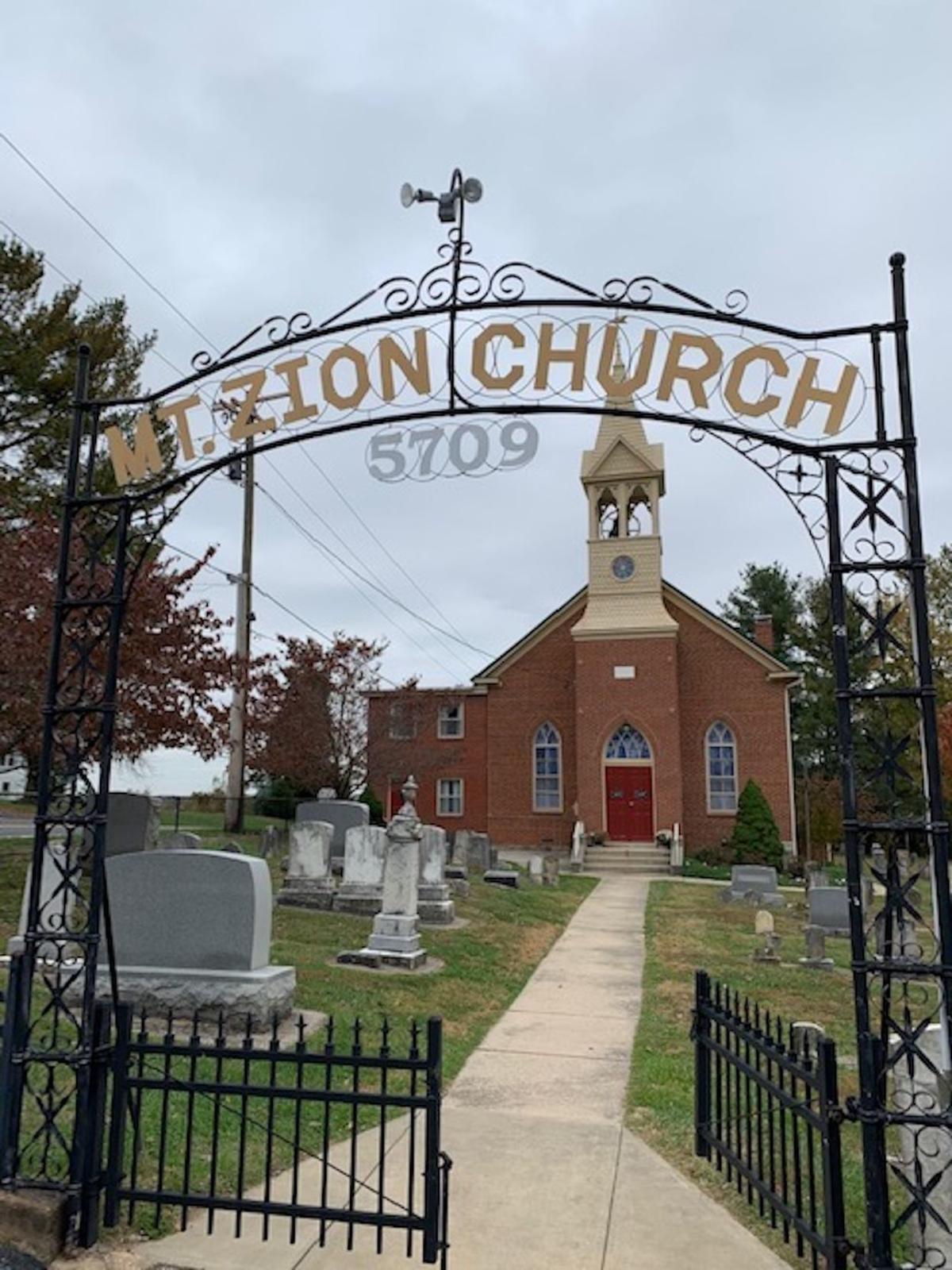 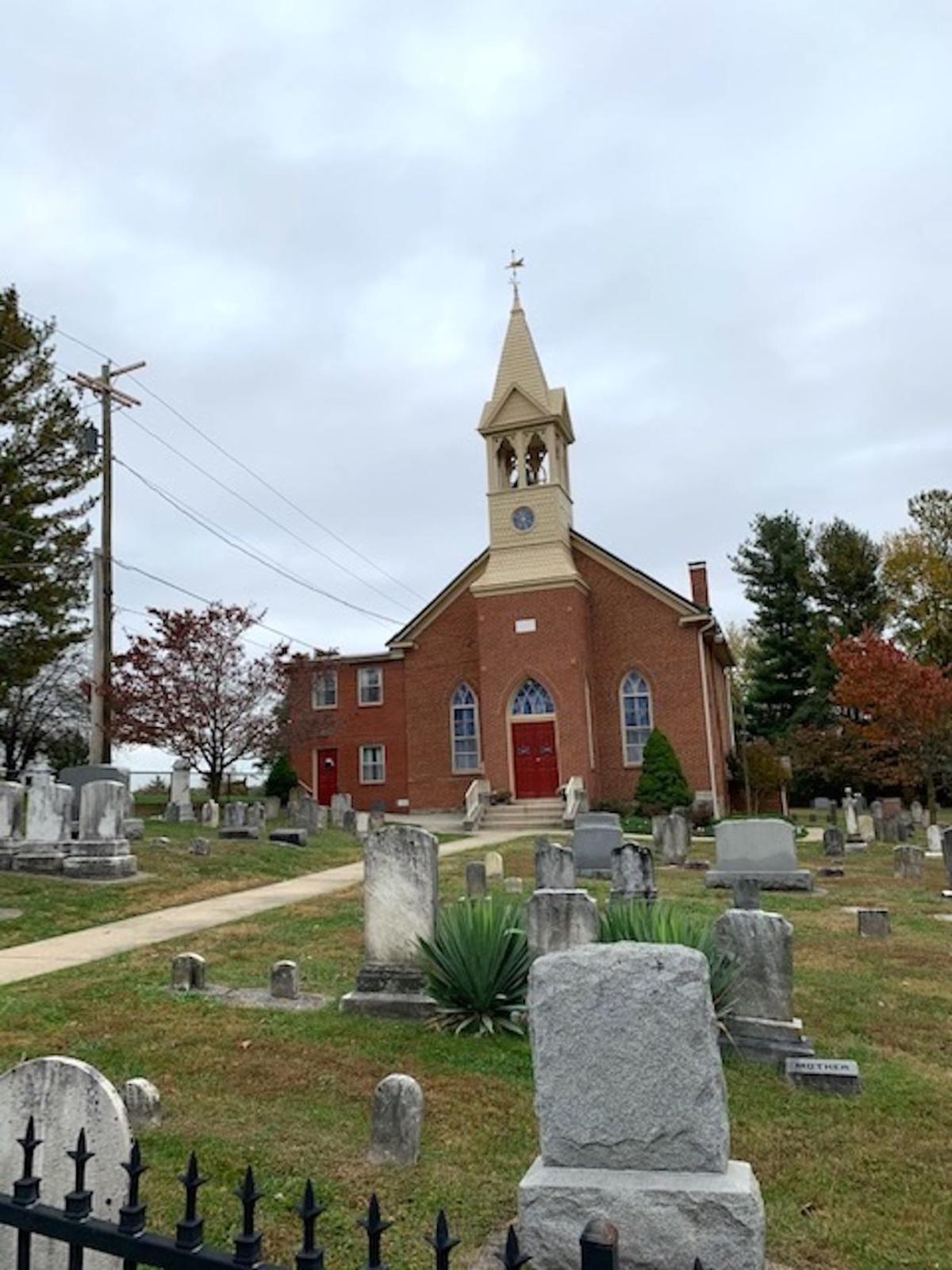 A graveyard sits in front of Mount Zion Lutheran Church in Feagaville. The church celebrated 200 years this year. 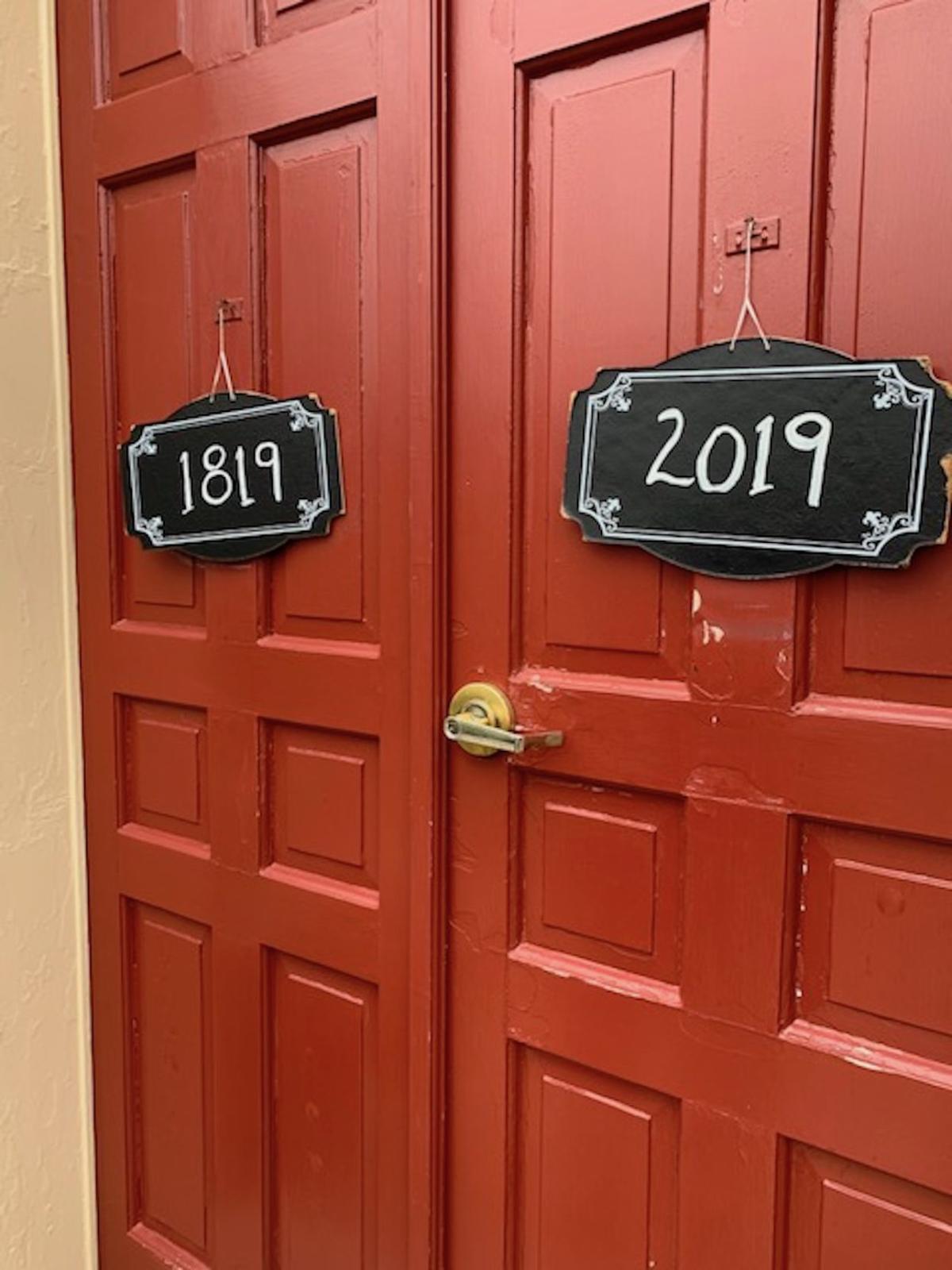 Signs on the front door of Mount Zion Lutheran Church in Feagaville show the 200 anniversary dates. 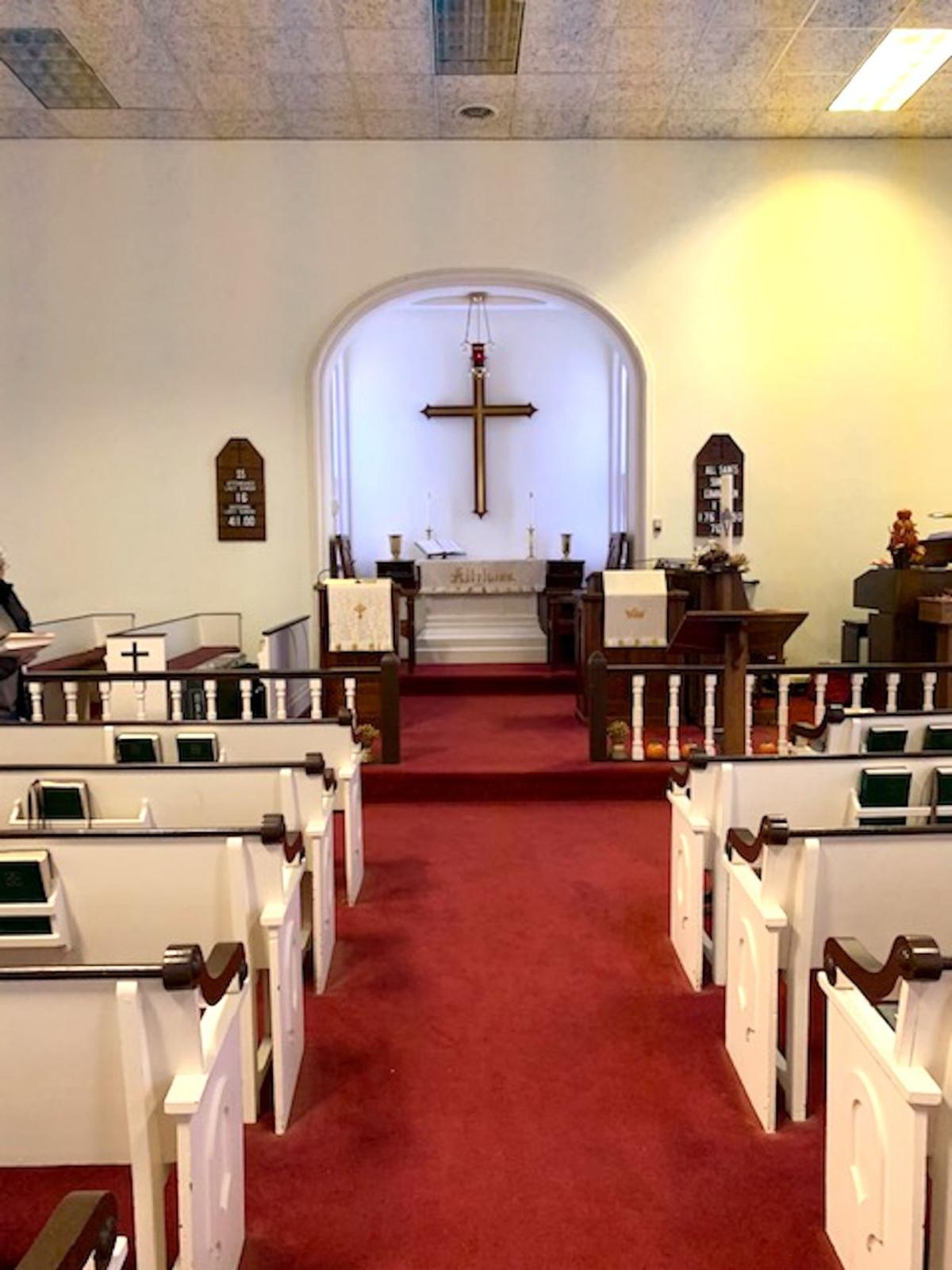 Mount Zion Lutheran Church in Feagaville has been a place of worship since 1819.

Members of Mount Zion congregation posed in the church’s altar on Jan. 20 to kick off the anniversary of the church’s 200th year.

A graveyard sits in front of Mount Zion Lutheran Church in Feagaville. The church celebrated 200 years this year.

Signs on the front door of Mount Zion Lutheran Church in Feagaville show the 200 anniversary dates.

Mount Zion Lutheran Church in Feagaville has been a place of worship since 1819.

For 200 years, Mount Zion Lutheran Church has sat on the top of a high hill on the corner of Mount Zion and Mount Phillip roads in Feagaville.

Those who visit the white country church must walk along a path that splits the graveyard where former members of the congregation now lay. Many of the tombstones are worn by age and weather including one for John Bast, born in 1772, who died at age 84 years, 11 months and 20 days in 1857. It is a reminder of how long the church has stood.

Longtime member Shirley Zimmerman knows exactly where she and her husband will be buried. Members of her family have already found their final resting places on the rolling hill. And on a crisp fall day when the surrounding trees are vibrant with autumn colors, one can see why that spot was chosen.

Since January, members of the congregation of Mount Zion have reflected on the church’s bicentennial year. A committee that includes Zimmerman, Marlin Delauter and her daughter, Brittney Smith, has presented programs to the congregation on the third Sunday of every month.

Mount Zion is a place that holds a special place in their hearts. The church’s altar has seen every war since before the Mexican American War. It has been a place of joy for weddings and a place of sorrow for funerals. Zimmerman was married there. She held her parents’ funerals there. It was where she was introduced to her faith.

“My parents came here. My grandparents. I can’t remember how many great, great, greats there are who have come here,” Zimmerman said while sitting in a church pew.

It’s been a Sunday tradition for as far back as she remembers.

“If you miss a Sunday, you don’t feel right,” she said.

The culmination of the yearlong celebration is set for Thursday, when The Rev. William J. Gohl Jr., bishop of Delaware-Maryland Synod, will visit. Following services, there will be soup and sandwiches, which they will share with members of St. Luke’s Lutheran Church as a parish event. Also, 600 photos will be shown highlighting Mount Zion’s history.

The historyThe Rev. Kenneth E. Gill Jr. has been the pastor for Mount Zion for 13 years. He is also the pastor at St. Luke’s, which is part of the Feagaville Parish.

Back when Mount Zion began, Gill said, it was just a small country church and included St. Luke’s. Eventually, St. Luke’s split to form its own church.

Mount Zion is believed to be one of the oldest Lutheran churches in Frederick County, with some records dating back to 1790. Congregations first met in homes before combining the Lutheran and German Reformed congregations, according to the church’s history.

In 1819, the church was officially built at the present site. The cornerstone of that church is part of the existing building.

The church remained relatively untouched until 1956. That’s when an iron fence was placed around the cemetery, and the church installed a foot-pumped organ. That same year, a Sunday school was added. Then in 1963, the interior of the church was updated.

The largest the congregation has been was 177 members, according to church history, and that was in 1874. Today, regular membership is around 30 a week.

Celebrating every monthEvery month the 200th anniversary committee has adorned the church, placing items on the stills of the windows. Zimmerman said Delauter’s special flair for decorating has added to the events.

Although Delauter is humble about her contributions, she said she’s enjoyed the monthly special events.

“We had a social held by a church member and shared their memories and their family history,” Delauter said. “That was pretty neat.”

One month they showed off a list of all the marriages that happened at the church. Another week they managed to find photos of former pastors, framed them and put them on display. Wooden crosses sat in some of the windows and now are on display in the balcony. Another month they collected photos of veterans who were members of the church and displayed them. They even had a brass band come one Sunday to perform.

“It’s nice to share these things,” she said, noting that one member who was in his 90s came and talked about what the church was like when he was younger.

One highlight was when Ruth Stenger Japzon of Hagerstown surprised the church with a specially written piece called “We Are the Church.”

Japzon occasionally substitutes for the organist/pianist and was told in advance she would be needed for the Sept. 15 service that fell during a 200th celebration Sunday.

She said she was inspired by the tenacity of the church that has managed to keep going after 200 years. The song, she said, is a gift for the church.

“I just wanted to give them something special because I thought a lot of churches can’t do that for 200 years,” she said. “It’s pretty amazing.”

Zimmerman said she’s glad that she got to be part of the committee for an important anniversary and is proud of how they worked together throughout the year.

She added that she had trouble naming the month she enjoyed the most. Gill, too, had a tough time deciding that.

He said they did special praise every month, which included God, the church, former pastors, His children, all the women, the community and more.

“I really enjoyed all of those (services),” he said. “And it’s been special.”

The futureLike many similar-sized churches, Mt. Zion is facing a decrease in numbers. An estimated 30 people attend the church regularly.

Gill said he knows they won’t be around when the church celebrates its next 200th anniversary.

“But I just hope that they continue to be generous,” he said.

Gill said he heard someone at a seminar say that if we are made in the image of God, then we have his DNA, so being generous is in our nature.

That’s why Mount Zion continues to be an active church in the committee. Church members regularly donate to the food bank, soup kitchen, Rescue Mission, Heartly House, Alan B. Linton Cold Weather Shelter and Wounded Warriors. With St. Luke’s they operate a Neighbor to Neighbor facility at the Ballenger Community Hall where they give clothes, dishes and furniture to anyone who needs help.

“So if they can, if they can continue to be generous, and supportive of one another in the ministries that they have, and continue to reach out into the community, I would like to see them do that because I’m sure that if they do. Then they will have a future here,” he said. “It’s when we stop doing those things and start becoming internalized that the churches start to fade.”

Remember Grandmother and me walking from Teen Barns Rd through woods to this church on Sundays when I was a young toddler. Sunday & Bible School. God Rest her. May Gods will &!the church continue.