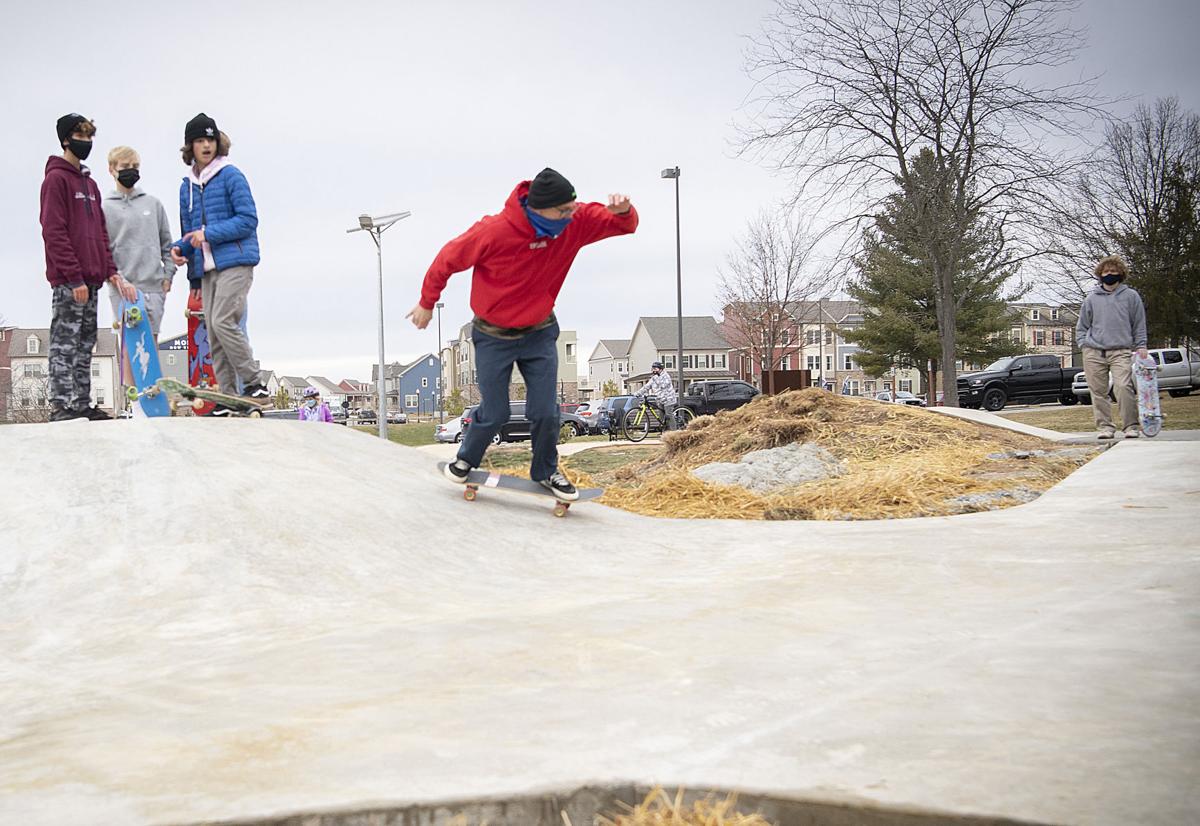 Urbana resident and skateboarder Joe Wallace skates on the new section of track at the Urbana Community Park Friday morning. Wallace brought the idea of building the skate park to officials more than 10 years ago. Friday, the newest element of the skate park was dedicated. 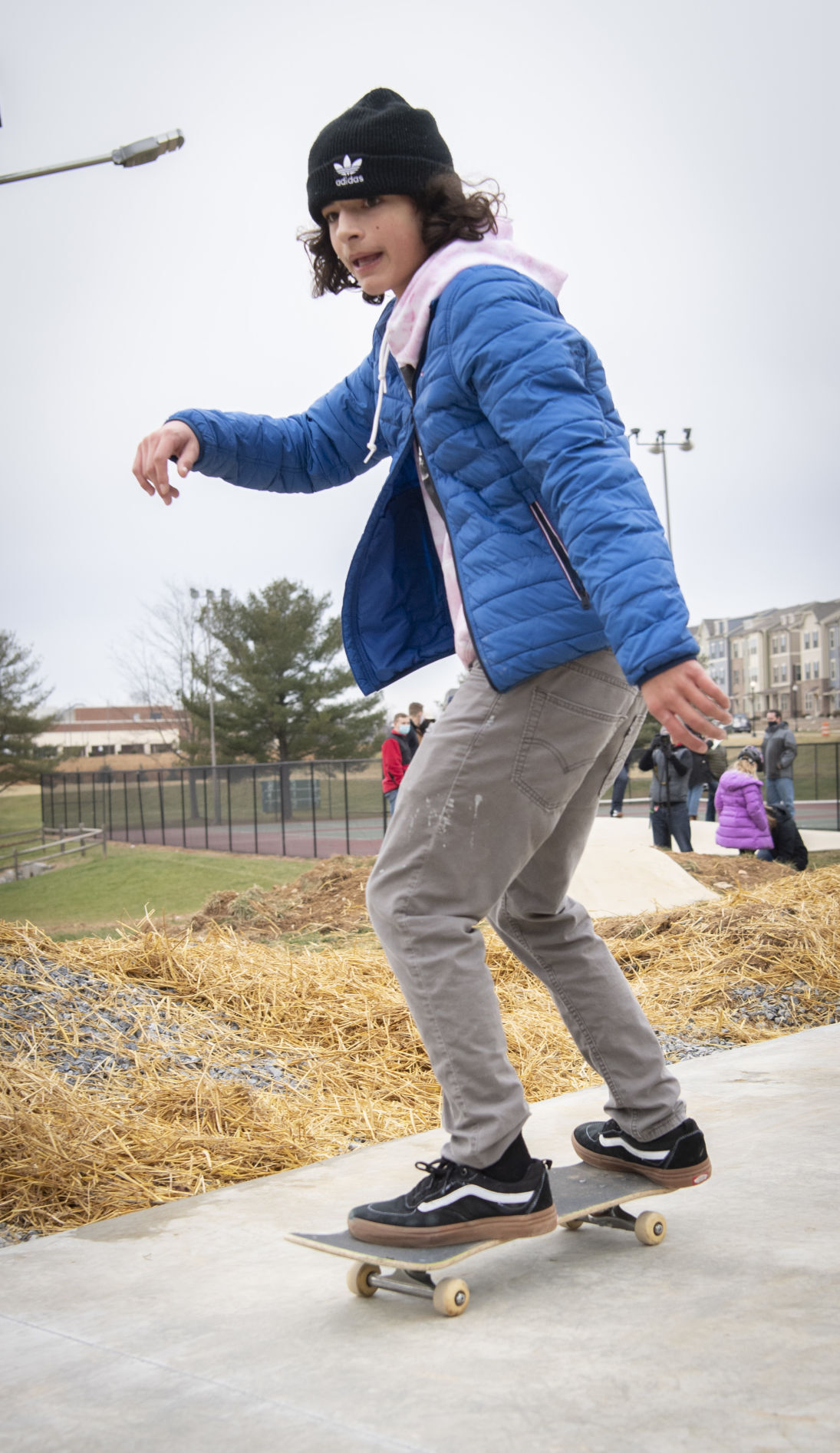 An Urbana skateboarder rides on the newest section of the skate park in Urbana Community Park Friday morning.

Urbana resident and skateboarder Joe Wallace skates on the new section of track at the Urbana Community Park Friday morning. Wallace brought the idea of building the skate park to officials more than 10 years ago. Friday, the newest element of the skate park was dedicated.

An Urbana skateboarder rides on the newest section of the skate park in Urbana Community Park Friday morning.

People of all ages came to the Urbana Community Park on Friday to welcome the newest element of the skate park: a second pump track featuring a few bumps, a banked curve with a flat edge on the top and a metal rail to slide across.

The new track adds to the community-driven concept that was dreamt up more than a decade ago.

A pump track is intended to be ridden by skateboarders, bikers and roller skaters alike without having to pump or pedal at all. The design of the track allows the rider to simply generate momentum with up and down body movements to move forward. They can be made with dirt, plastic or asphalt, but the pump tracks at the Urbana skate park — designed by Arment Concrete out of Pennslvania — are made with concrete. The new pump track is also accessible to people who use wheelchairs.

“We saw a lot of these being built in Europe, and the great thing about this ... is kids can run around them, people can skate on them with scooters, big wheels — we’ve seen everything out here,” said Billy Shreve, a former Frederick County Councilman and the founder of the nonprofit Classmates for Life.

The new pump track connects to the first track, which opened in 2019, and sits beside the half-pipe which was installed in 2017.

“It looks great,” said Wilhelm, an 18-year-old resident of Urbana. “I’m already thinking of all the ways that I’m gonna use it.”

The project has been in the works since 2010, when Urbana resident and skateboarder Joe Wallace approached Shreve about the undertaking. He saw a lot of other skaters in the Urbana area and wanted to give them a place to skate.

Wallace alone raised a lot of the funds for the first part of the park, which features the half-pipe and the flat pad. The new pump track, however, was funded entirely by the G. Ellis Charitable Foundation.

President Stephen Barrett heard about the project through Classmates for Life and was drawn to it since his son has been skateboarding for 19 years.

“This is a great place for kids to be as opposed to behind shopping centers smoking and drinking,” Barrett said. “You see parents out here, you see adults and kids.”

In addition to officially opening the second pump track, Friday morning served as an opportunity to break ground on the next phase of the skate park, for which The Rotary Club of Southern Frederick County donated $10,000 to the cause.

“Unanimously, our board wanted the skate park to be one of our biggest initiatives ... because all the kids are doing virtual school now, and they’re just sitting in front of the screen inside all day,” said Tom Seymour, Rotary Club president. “So we want to get kids outside.”

Wilhelm said he has been using the skate park more than usual since last summer since there isn’t as much to do during the pandemic. He helped with the excavation for the second pump track. He said he loves the community presence at the skate park.

“It’s like any cartoon you watch, you have the same few characters, and one character’s doing some crazy spin-off and everybody’s up to something fun,” he said.

Bryan Voltaggio, a well-known local restaurateur and Urbana resident, has also contributed to the project throughout the years, and he plans to do so again. His children skate, and he thinks it’s important to have a place in town to do so safely.

“During COVID we realized that there’s a lot of kids around and skating in the neighborhood, and we knew that there’s gonna need to be bigger expansion onto this,” he said.

Matt Arment, owner of Arment Concrete, said he enjoys working with Shreve on the project and sending designs back and forth.

“Working with them and doing a little bit at a time helps you to figure out what your whole project should be,” he said. “We like doing phase builds where we can get feedback on the first thing and kind of build some momentum for what you want next.”