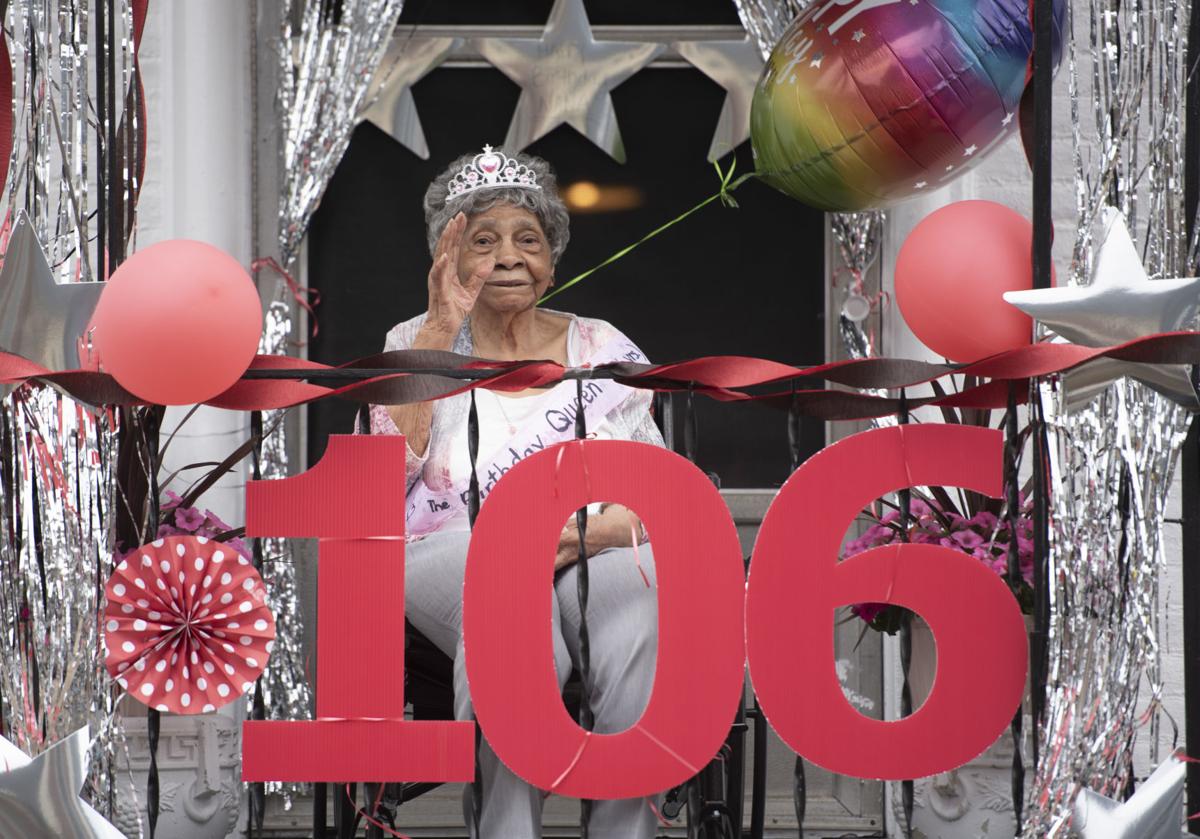 Ruth Onley, who turned 106 years old last week, waves to well-wishers from the porch of her downtown Frederick home during a parade of vehicles Saturday organized in her honor. 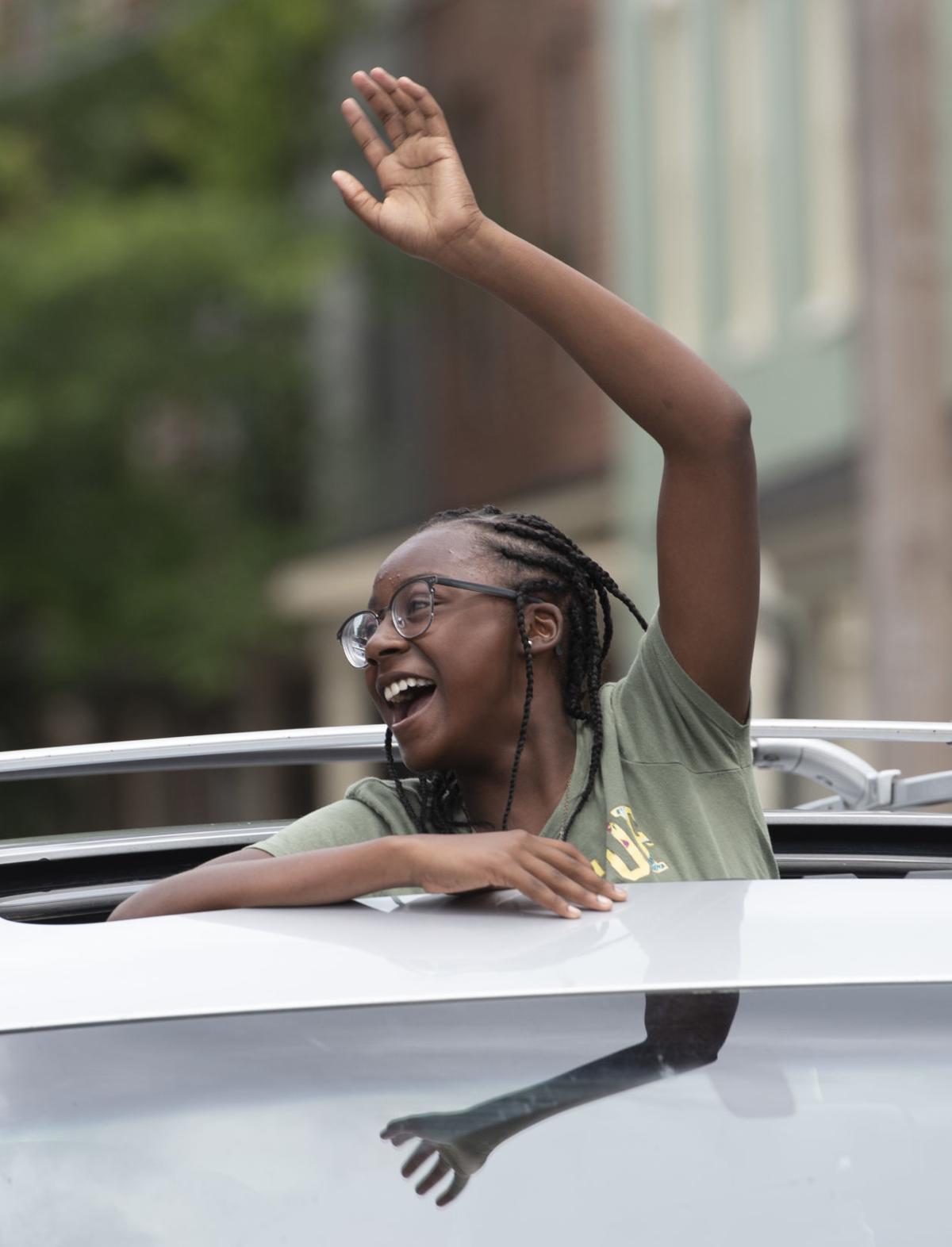 Briana King, 13, waves to her great-grandmother, Ruth Onley, who turned 106 years old last week during a parade in front of her Frederick home Saturday.

Ruth Onley, who turned 106 years old last week, waves to well-wishers from the porch of her downtown Frederick home during a parade of vehicles Saturday organized in her honor.

Briana King, 13, waves to her great-grandmother, Ruth Onley, who turned 106 years old last week during a parade in front of her Frederick home Saturday.

Ruth Onley doesn’t have any secrets for what it takes to live to 106 years old. But if she had to answer, she’d tell you it’s all faith and hard work.

And laughter. Onley loves to laugh.

She says she reads the obituary pages of the newspaper every morning.

Her life started in Knoxville, where she lived with her parents and nine siblings, some of whom passed when they were young. When she was eight, she entered the third grade. It was her first time going to school, which was a mile away from where she lived.

Within a few days, Onley said, her teacher told her she was too smart to be in the third grade and moved her up to fourth. But once the winter came and Onley could not walk to school in the harsh mountain snow, she stopped going. Come spring, she didn’t go back.

There were things to do to help her family, and education wasn’t a priority. But almost a century later, she makes sure to tell her great-grandchildren that she only had a few months of formal education after she beats them in Scrabble.

On Saturday, Onley’s family gathered in front of her house for a 106th birthday parade. Onley sat on her front stoop, wearing a crown and sash, as her six granddaughters and other family members greeted a long line of cars.

Leading the cars was a firetruck and ambulance, who turned on their sirens and lights to celebrate Onley, who waved from the stoop.

Many cars were decorated with birthday banners and balloons, and signs emblazoned with “Nana” and “Our Queen.” Family and friends rolled down their car windows to yell happy birthday to Onley and hand gifts, cards and flowers to her granddaughters, who then placed them in a large bin.

Neighbors opened their doors to sing “Happy Birthday.” Passers-by who didn’t know Onley rolled down their windows to wish her a happy 106th.

Several generations were present at the socially-distanced party, including a great-great-granddaughter.

Onley is the matriarch of a big family. She doesn’t have any great-great-great-grandchildren, but it doesn’t worry her.

“Give me a little more time,” she said, smiling. “I’m just getting started.”

As a teenager, Onley left home to take a job housekeeping for a family. These jobs took her from Knoxville to Silver Spring to Jefferson.

A family Onley worked for brought her to Frederick one night so she could catch a bus to Knoxville. But after he dropped her off, she realized the bus had already left. She ended up walking all the way back to Knoxville to see her family.

Her four children, Mary, Bob, John and Jane are not surprised by this when she told them, gathered in her living room a few days before her birthday. Their mother is headstrong and tireless.

Around age 20, Onley moved to Frederick and got a job at Bennett’s, which was on Market Street, before meeting her husband at the Elk’s Lodge on All Saints Street a few years later.

After getting married, she had four kids in four years.

Her children, grandchildren and great-grandchildren fondly remember the Sunday lunches she would make after church. She would tell them, “I just made a few things,” but they would find ten or more dishes set on the dining room table like mac and cheese, potato salad, ghoulash and lemon meringue pie.

She cooked for her family until she was in her 90s.

“We had to take her out of the kitchen,” said her son Bob Onley.

Johnny remembers neighbors coming over to eat, and Ruth never turned anybody away. He said he’d often have to go find somewhere else to sit, because the table was so full.

He also remembers Ruth being stricter than his father. If he was in trouble, he’d rather have his father discipline than his mother. This only makes her laugh now.

“I think I did a right good job raising my kids, because now they won’t let me go,” Ruth said. Three of her children live in Frederick and one lives in Baltimore, so there is always someone to help her around the house.

But she’s fairly self-sufficient. She takes medication for diabetes and checks her blood sugar every day on her own.

“I think I’ll overcome it some day,” she said.

Once her kids had grown up, Onley began working in the nursery at Frederick Health Hospital, taking care of newborns and helping new mothers. She loved it.

She bought the house she still lives in, on 5th Street, for $11,500 in 1967. It was the first house she had ever owned. While living in the Lincoln Apartments, her friend Marjorie Fortman found the house and helped her get everything she needed in order to purchase it.

All four of Ruth’s children attended Lincoln School, when it was still an all-Black school. Schools did not integrate until a year after Jane, the youngest child, had graduated.

Her daughter Mary Hoy remembers the school fondly, remembering that her Black teachers cared deeply about the students and wanted them to succeed.

But Jane emphasized that separate did not mean equal. She wasn’t able to learn a second language at Lincoln, or learn some of the more advanced subjects that were taught at Frederick High, where she wanted to attend.

“I felt like I would have been more prepared [for college] because most of the things they taught at Lincoln were things that ... prepared you for the basics of life,” Jane said. “But I was more academically minded.”

Jane said she marched in the civil rights protests of the ‘60s. She recalls asking her mother if she would get her out of jail if need be, since many of her friends had been arrested during the protests.

“I don’t remember that, but I would have come and got you,” her mother said upon Jane recalling the memory.

Despite not having the high school education she desired, Jane went on to college. But even without a second language class, she knew she could do anything she set her mind to, because that’s what her mother taught her.

“I always felt that because of the love I was given, that I could do anything,” she said. “And so even though I didn’t have the background that a lot of other people had before they went onto school to further their education, I always felt like I could do it.”

Dawn Onley, Ruth’s granddaughter, takes her grandmother out to dinner once a month with the five other granddaughters of the family. They call themselves “Ruth’s Six Spitfire Granddaughters,” and they have quite the time taking Ruth out to new restaurants.

Even at 106, Ruth manages to be social. During the pandemic, she’s missed the volunteers from Meals on Wheels who come to drop off food at her house a few times a week. Now, they’ll occasionally come over, but don’t get near her.

People want to talk to her. She has that way about her.

A group of teenagers once came over to paint the outside of her house, and by the end of the day she had talked to several of them about their personal goals and problems. She can give advice, but more than anything, she’ll pray for people.

Her son Bob says that’s something that’s stuck with him about his mother: how faithful she is. Dawn says Ruth can recite scripture like nobody else.

“You have to listen to what she says,” Bon Onley said. “Because I’d get into situations and she’d say, ‘Bobby, if you had told me about it, I would have prayed for you.’”

Her great-granddaughter, Anaya King, 17, said her fondest memories of Ruth are sitting with her in her house and talking about life. She always has good advice.

And she always has a good joke.

A few days before her birthday, with the family gathered in Ruth’s living room, Jane asked if her mother would like some water, saying her voice sounded hoarse.

“You wait until you turn 106 and see if your voice sounds hoarse,” Ruth said, not missing a beat.

The family erupted into laughter.

What a beautiful lady and an inspiring story. [happybirthday]

Beautiful story and beautiful lady. God bless you for your faithfulness and love of others through all the years. You are a testimony of what God can do through us. You have left a lasting legacy to your grandchildren that they will remember and pass on to their children. Spending time with someone, listening, and offering prayer are the best gifts money can never buy. Happy Birthday!

Wishing you a very happy birthday. Sounds like you raised a wonderful loving family. [happybirthday]