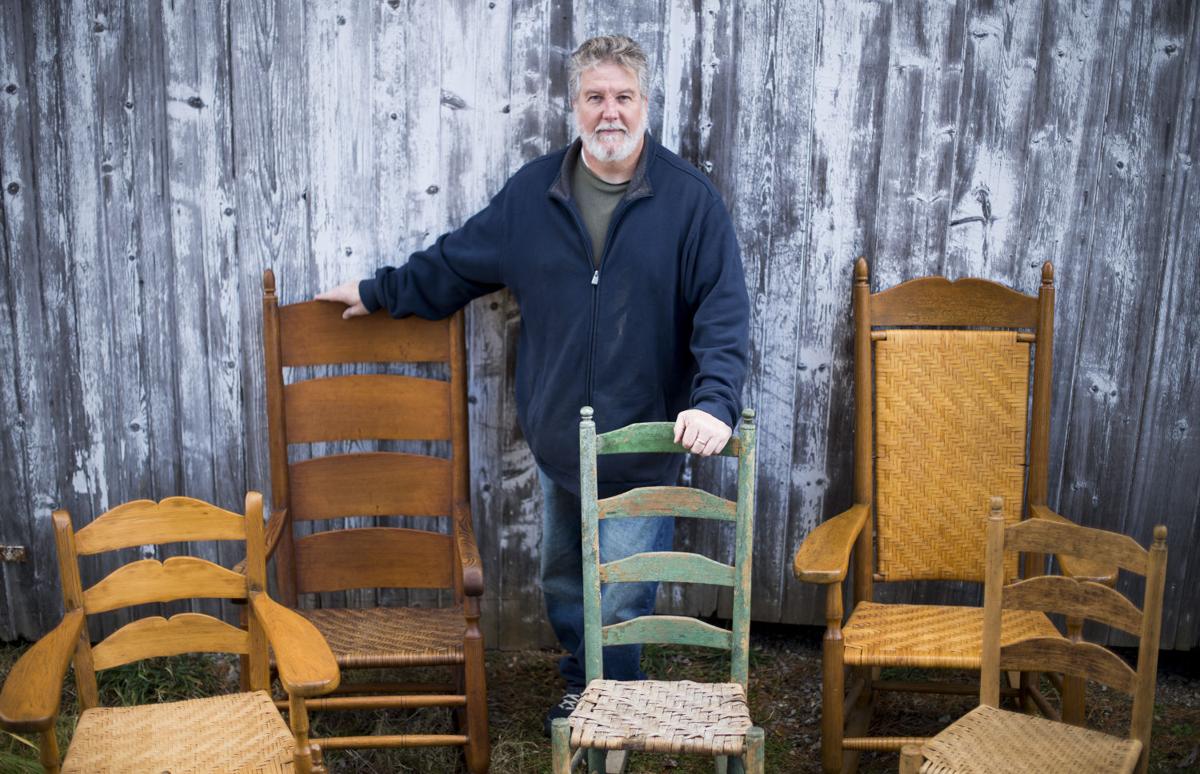 Robert Wilson displays some of his Stottlemyer rocker collection outside his Myersville home. These chairs were made in Wolfsville and are still known for their craftsmanship. 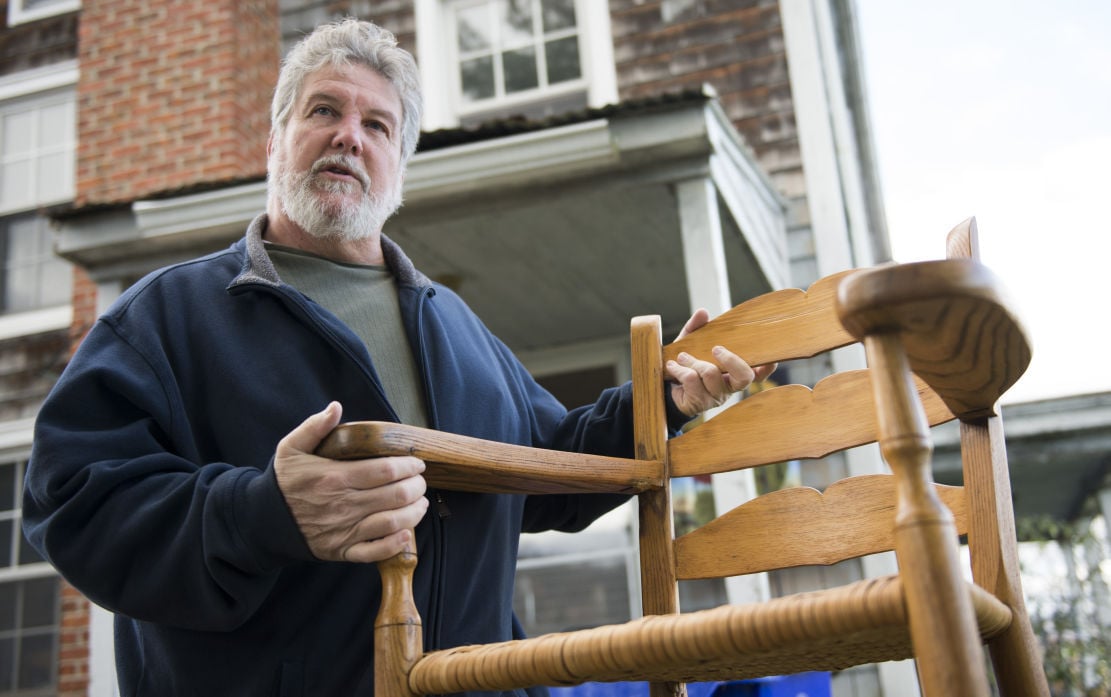 Robert Wilson displays one of his Stottlemyer rocker chair collection — a historic schoolmaster’s chair. These chairs are easy to identify by their thick left armrests. 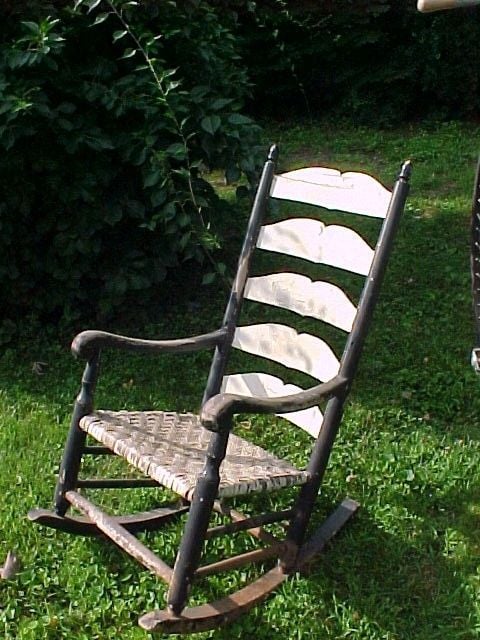 This is an example of a Stottlemyer rocker, found under the porch at William Moran’s knifemaking studio in Middletown. 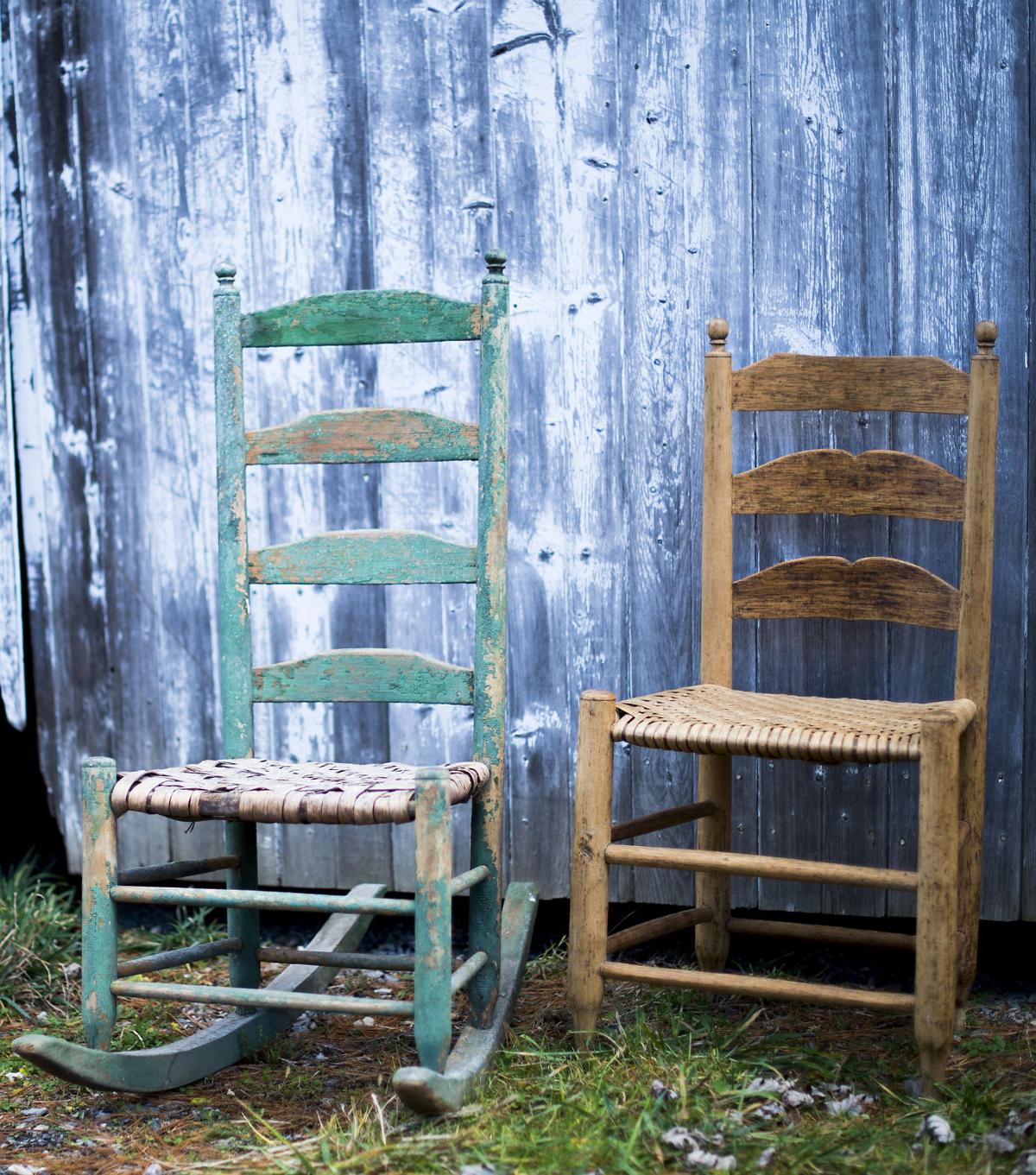 Two of Robert Wilson's Stottlemyer rockers. These chairs were made in the Middletown Valley from the late 19th century to about 1925.

Robert Wilson displays some of his Stottlemyer rocker collection outside his Myersville home. These chairs were made in Wolfsville and are still known for their craftsmanship.

Robert Wilson displays one of his Stottlemyer rocker chair collection — a historic schoolmaster’s chair. These chairs are easy to identify by their thick left armrests.

This is an example of a Stottlemyer rocker, found under the porch at William Moran’s knifemaking studio in Middletown.

Two of Robert Wilson's Stottlemyer rockers. These chairs were made in the Middletown Valley from the late 19th century to about 1925.

MYERSVILLE — This is a story about a style of chair, and the 19th-century family that made those chairs.

Stottlemyer chairs, made in the Wolfsville area from the 1850s until about 1925, tell stories about their owners, about family life, and about the region they come from.

The chairs were a part of life in the Middletown Valley from birth to death. Babies were fed in nursing rockers. As the children grew, many had child-sized rockers, which even helped them learn to walk. Girls learned to sew using sewing rockers. The family would eat its meals in Stottlemyer chairs. Schoolmasters taught lessons from Stottlemyer chairs. And as family members grew older, Stottlemyer chairs provided comfortable seating for arthritic hips.

Stottlemyer chairs were known in Frederick County and beyond, for their sturdy build and style. With a plentiful supply of wood and long winter days, the chair industry became a mainstay in the Wolfsville area in the late 19th and early 20th centuries. Most homes in the Middletown Valley had a Stottlemyer rocker.

Wilson, who went into the auction business in Frederick County about 35 years ago, said Stottlemyers once sold for as much as $6,000 at auction.

“Most chairs were made for a specific person,” Wilson said. “They vary in width and seat depth.”

David Stadelmayer, a German immigrant who settled in the Middletown Valley in the late 18th century and raised 10 children, operated a sawmill along Spruce Run near Wolfsville. His son, David Jr., operated an up and down sawmill on the property, the remants of which can be seen today. David Jr.’s grandson, Fred, began making furniture at the Spruce Run homestead, probably in the 1850s. In 1857, his son, Christopher Columbus, known as Columbus or CC, was born. Columbus added the distinctive acorn finials the chairs were known for, and made his chairs at a shop along what today is Black Rock Road.

They don’t make chairs the way they used to

Columbus made more than chairs. Tables, stools, high chairs and cradles came out of his shop. But it was the chairs that he became known for, throughout the Middletown Valley and beyond.

“I am not an expert,” Wilson said. “My interest lies in the Stottlemyers that have been collected by my wife’s family and as an auctioneer.” Wilson’s wife, Debbie, is a Bittle, and her father passed on dozens of chairs to his children and grandchildren.

As Wilson says, they don’t make chairs the way they used to. Especially Stottlemyer chairs.

Wilson studied those chairs, and learned about them. He learned about Columbus’ trademark finials and oval pattern beneath the arm. Stottlemyers are distinctive for their decorative turnings on the posts and decorative trims on the rungs.

Stottlemyer chair backs are typically ladderbacks with heart-shaped rungs on the backs. Often the heart on the top rung was flattened, because chairs would get knocked over and the tops of the rungs would snap off.

Local farmers would bring in their own wood to be made into chairs. Sometimes, they even helped in the manufacture. Family members most likely helped Columbus, forming a sort of assembly line to churn out the chairs.

Some chairs by Fred Stottlemyer survive, and Wilson has a couple. Fred used tree nails, which had to be inserted into a pre-drilled hole. Wire nails, which Columbus used, could be hammered in. Fred also used wooden dowels to hold the slats in place.

Women using a rocker while nursing a baby often put their foot on the side on which they were nursing. Nursing rockers generally had a longer seat, with straw or ticking to give it padding. This made it more comfortable for the woman who would sit in one position for long periods.

On the other hand, while a woman sewed, she was often up and down frequently. Wilson pointed to a tall, narrow sewing rocker with no arms. It was made for a tall, thin woman, judging by its height.

Usage patterns can be seen in other chairs, also. Kids often learned to walk using the tiny rockers. They would be turned upside down, and the toddlers would hold onto the legs of the chair and scoot them along the floor. “You can see this by the armrests, which are worn down flat,” Wilson said. Children’s rockers that have survived usually show evidence of this.

Schoolmaster’s chairs had one thick, curved arm and one thin arm. The chairs were typically made of oak, maple, walnut, cherry or ash. Most of the chairs were made with whatever wood was available locally.

Most of the large rockers with arms were made to order. “They would measure you when you ordered a chair,” Wilson said. The back slats were steam-bent, in order to comfortably fit the curve of the back. These were cut out of green wood. The slats gradually get shorter from top to bottom.

Many people ordered footstools to go with the rockers, but those can be harder to find. Footstools and seats were usually made of woven split wood. Sometimes the backs were woven split backs, although most were slats. It’s rare for the split seats and the split tops on the footstools to survive; most have been replaced, Wilson said. Original seats and stool covers do bring more money, however. “Those old seats would break apart,” Wilson said.

Columbus’s wife, Sallie Blickenstaff Stottlemyer, and their daughters would put in the split seats.

Columbus stopped making the chairs about 1925, when he suffered a stroke. After that, people continued to ask his son, Fern Stottlemyer, to replace the split seats and backs, but for the most part, the Stottlemyers went out of the chair business. “They tell me Fern was left-handed, and you can recognize his pattern by the way the splits are put in,” Columbus said.

Wilson can also tell if a chair is not a Stottlemyer. Other local chairmakers, and there were a few, often left a circular, not oval, pattern beneath the arm. Experienced auction-goers will often first check for that oval if they suspect a chair is a Stottlemyer.

Wilson and his wife have owned dozens of Stottlemyers. All their children and grandchildren had children’s rockers as toddlers.

But he’s seen the value of the chairs drop in recent years, by an average of 30 percent. “I think the generation coming up doesn’t seem to have the same appreciation for them,” he said. “I’ve seen more Stottlemyers come up for auction when they used to be passed down, or people will break up a set more easily.” The large rockers once sold routinely for $2,000, but now typically sell for $1,000 to $1,200.

Stottlemyer chairs still come up for auction, and the Middletown Valley Historical Society has one in its collection.

“You’ve got to have an appreciation for history and the families that settled this upper section of the valley,” Wilson said. “I’m the caretaker of these chairs for the next generation. The real value to me is in what they represent and what they meant to the valley.”