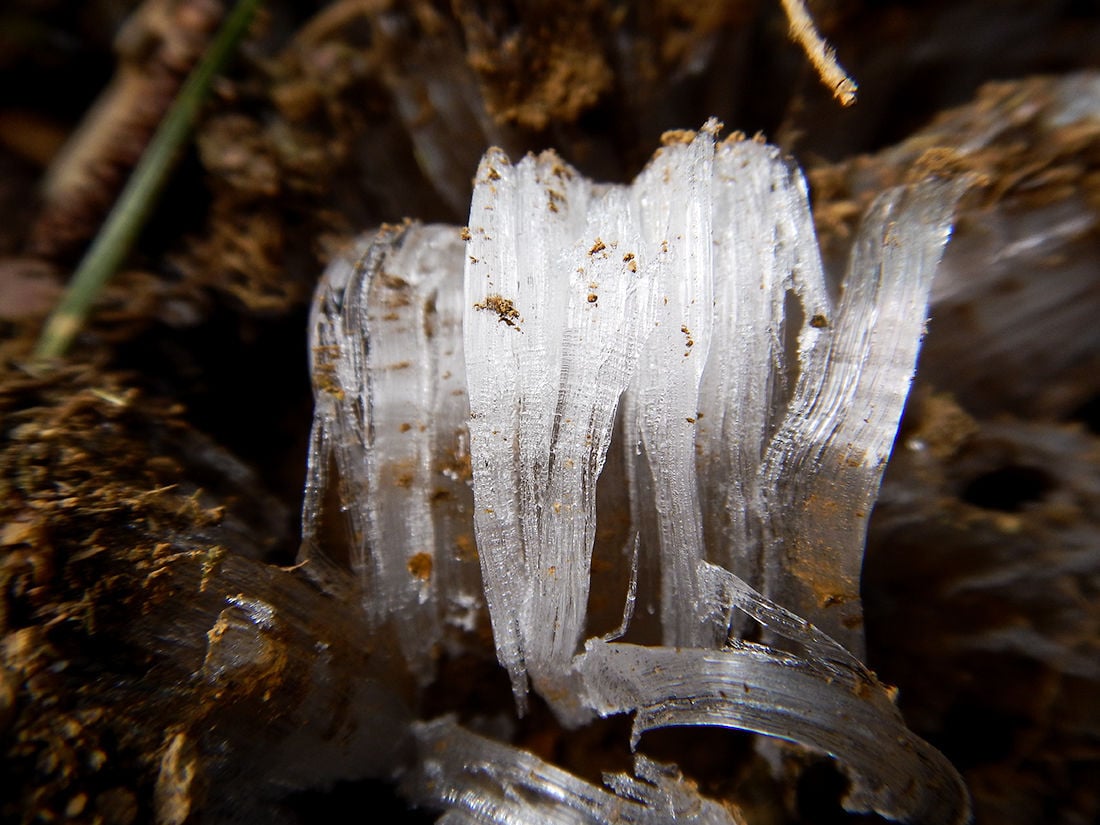 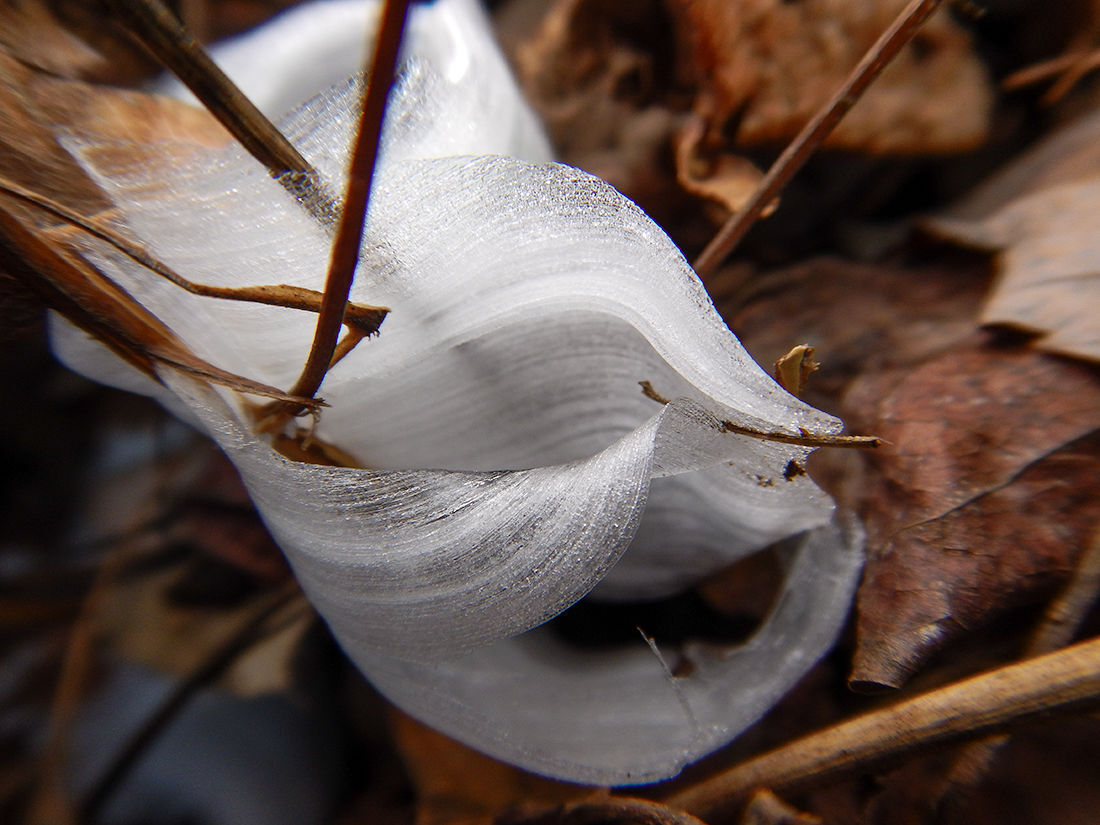 Also known as crystallofolia, rabbit ice or frost ribbons, ice flowers are formed when frozen plant sap expands and bursts through the epidermis of plant stems, oozing out and curling to form beautiful, elegant frozen structures. 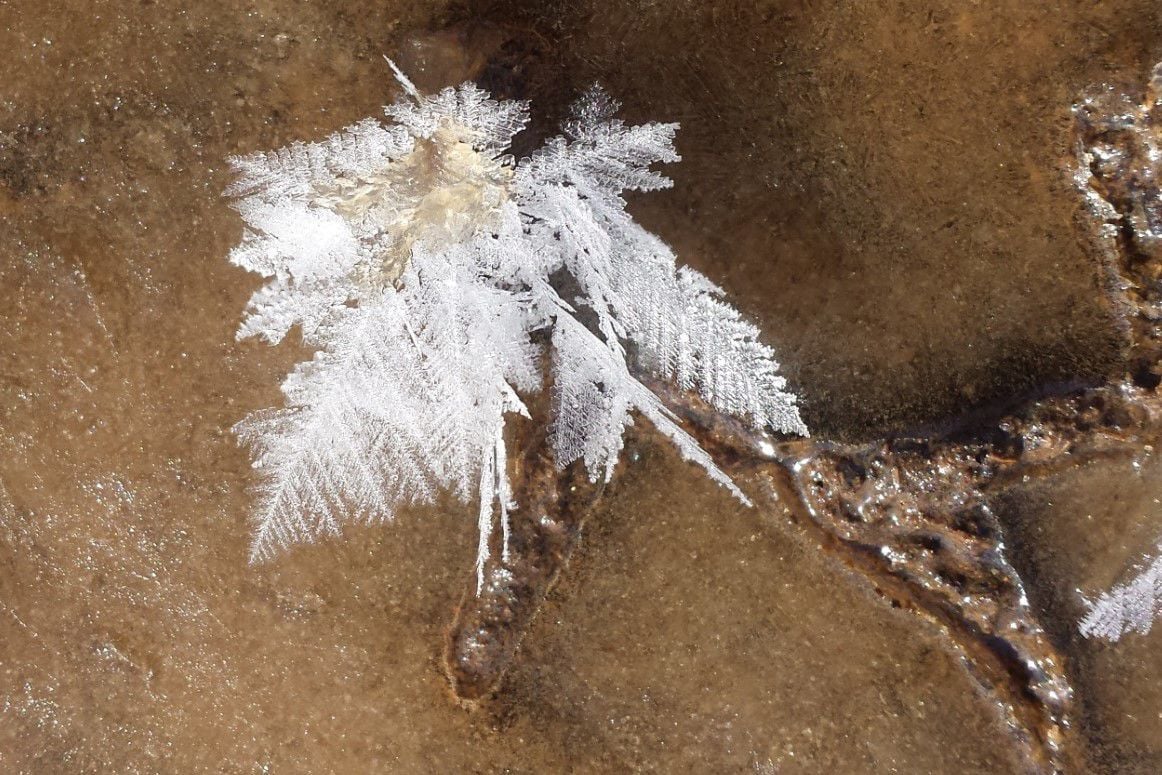 Also known as crystallofolia, rabbit ice or frost ribbons, ice flowers are formed when frozen plant sap expands and bursts through the epidermis of plant stems, oozing out and curling to form beautiful, elegant frozen structures.

Whether you are hiking in the mountains or walking in your own neighborhood, you may have been puzzled by some very beautiful icy phenomena occasionally seen during the winter months. Among many of these beautiful ice sculptures, one is called ice flowers, another is needle ice and yet another is frost flowers.

Let’s begin with the most common — needle ice.

When the conditions are just right, you might be walking along and come across columns of delicate, needle-like ice rising right up from the ground. Perhaps you think you’ve landed yourself in Middle Earth or an ice maiden’s fairy garden, but I assure you — science can explain these beautiful structures. They may only be an inch tall, but can reach several inches if conditions are right. Sometimes you might unwittingly walk right over the crunchy ice needles because they are capped with soil or dead leaves, and you never even know they are under there.

How does this happen? The conditions are right for ice needles formation when the air temperature is below freezing while the soil temperature is still above freezing, providing water for ice needles to form. When icy cold air freezes a layer of water right on the surface of the soil, and there is water just below it, more water will be drawn up behind it by a process called capillary action. Capillary action occurs because water molecules are attracted to each other, and this causes all kinds of really cool stuff to happen in nature. When the water is drawn up by capillary action through the round pore spaces in the soil, it begins to form a long column that we call ice needles. As long as the water below remains in its liquid state and the air temperature is cold enough to continue to freeze the water on the surface, the crystals will continue to grow. Beautiful science!

An even more beautiful icy phenomenon is the formation of ice flowers. Also known as crystallofolia, rabbit ice or frost ribbons, ice flowers are formed when frozen plant sap expands and bursts through the epidermis of plant stems, oozing out and curling to form beautiful, elegant frozen structures. Ice flowers are found growing out of the sides of dead plant stems. Certain species of plants are more likely to form these than others. One such species is yellow ironweed, a very tall member of the daisy family and a very common flower in our area. Further research on the topic will lead you to all kinds of interesting facts about how to find ice flowers. They are a bit harder to find than ice needles and don’t seem to last as long, so get out there early in the morning to do your walking if you hope to find some ice flowers.

As a result of a completely different process, frost flowers are also visible during winter months. These ice structures form the same way frost forms— from moisture in the air. Frost flowers form when that moisture deposits on existing ice crystals, according to Dr. James R. Carter, professor emeritus in the geography and geology departments at Illinois State University. He bemoans the confusion between frost flowers and ice flowers, and is determined to set the record straight in his article at this link: http://my.ilstu.edu/~jrcarter/ice/Frost-flowers. These formations are just like frost on your windows or on the surface of plants; they have a definite crystalline appearance and even remind one of snowflakes in their variety and complexity.

Other icy phenomena that would be fun to look up are ice hair, brinicles, snow rollers, ice circles and pancake ice. Most of these form because of one of the unique physical properties of water — that attraction between water molecules previously mentioned, that leads to the formation of crystals and capillary action, resulting in these beautiful formations. The unique properties of water make it COOL, and freezing water — well, it’s obviously even cooler!

A good spot to see ice "sculptures" is on the side of the hill on 340 between the Va. Exxon station and the Shenandoah River bridge.