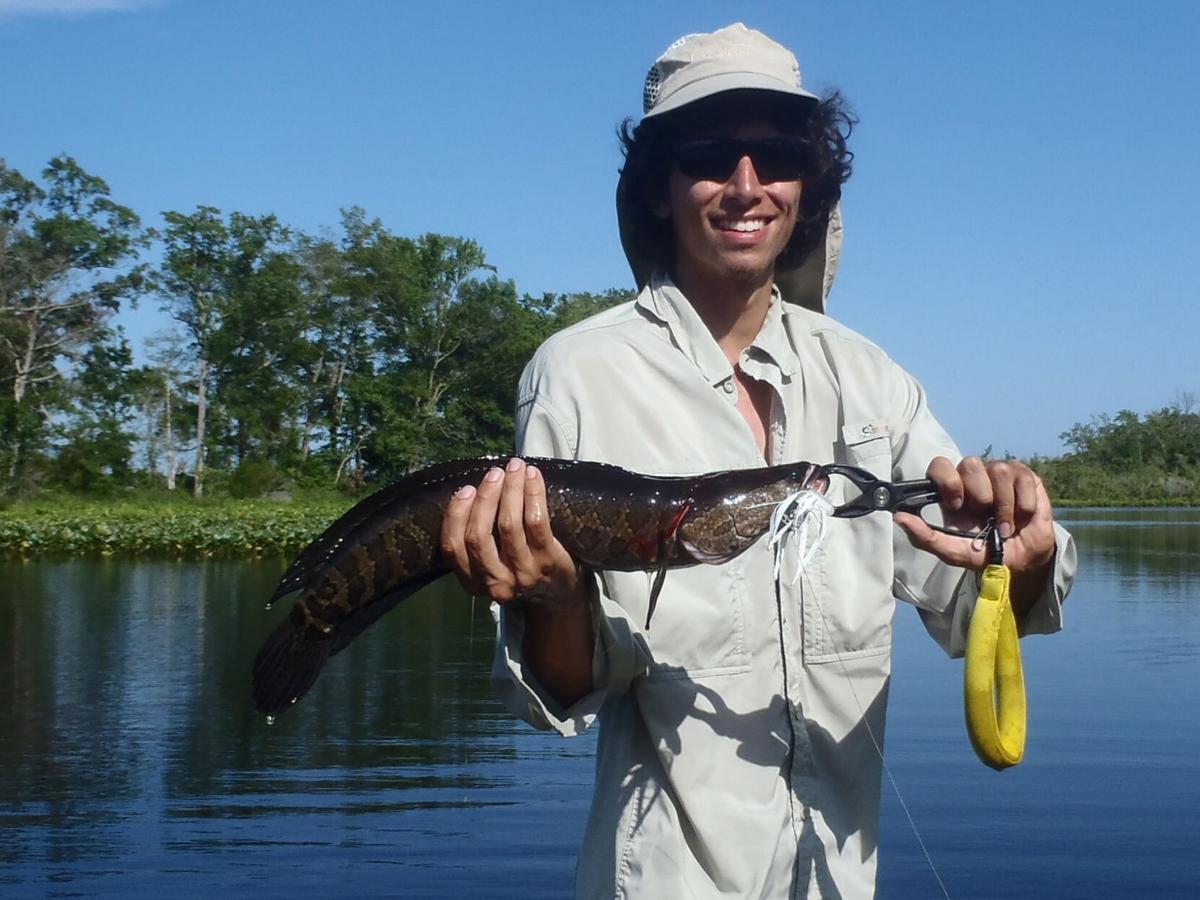 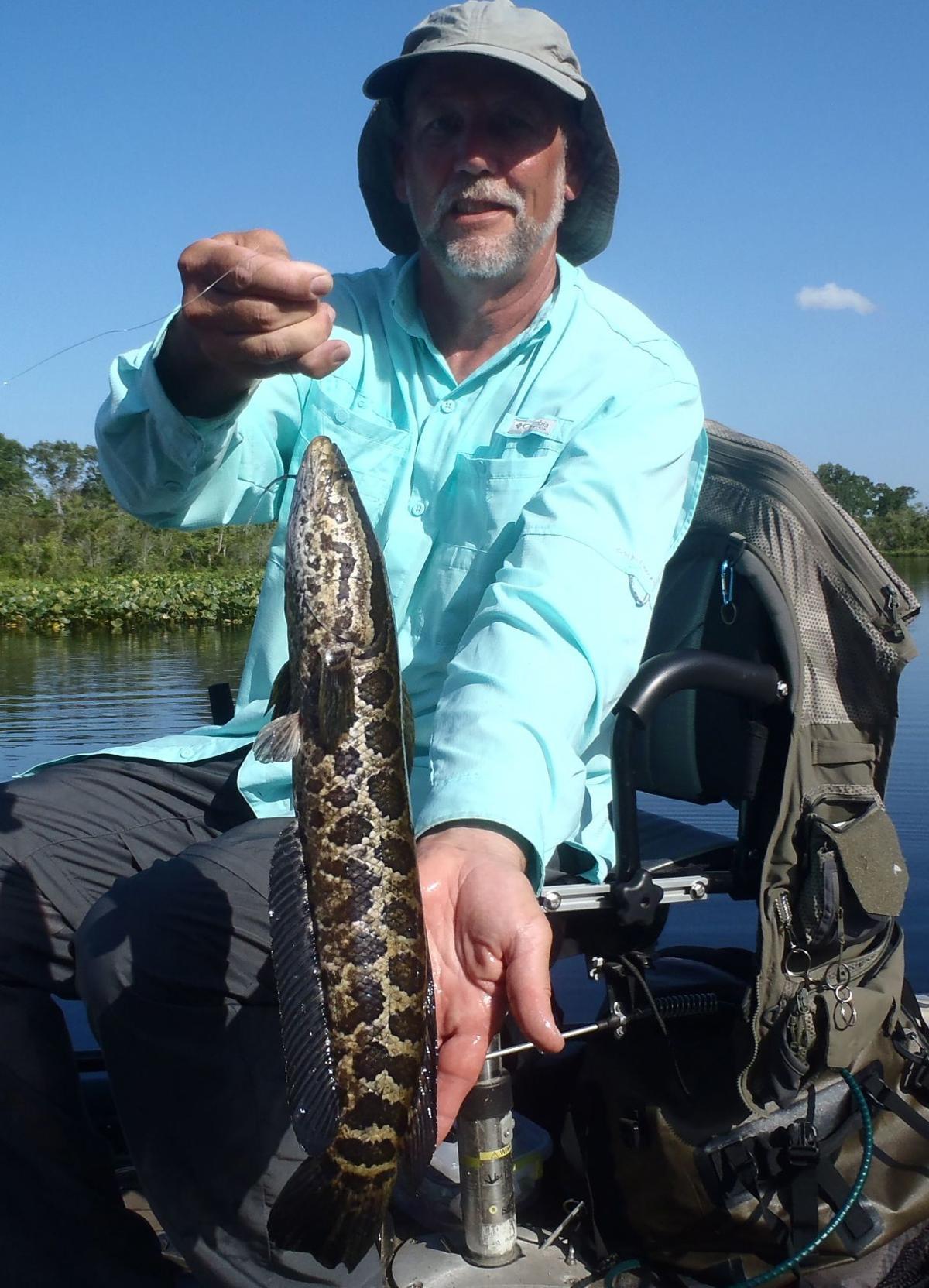 Persistence paid off for Dan Neuland, who ended the day with a snakehead that slammed a Clouser streamer fly.

Persistence paid off for Dan Neuland, who ended the day with a snakehead that slammed a Clouser streamer fly.

In 2002, a breeding pair of northern snakeheads was discovered in a pond in Crofton. According to the article written at the time in the Baltimore Sun, the fish were determined to be pets that a local resident released into the pond when they outgrew the owner’s fish tank. The pond was infested with thousands of snakehead fry, and the news of the discovery made national headlines. It was the beginning of a frenzy of environmental concerns over the potential impact of this invasive species replete with all the hysteria regarding the species’ ability to breathe air, walk on land and devour everything in the ecosystem.

Despite initial efforts to eradicate this invasive species, somehow Maryland and Northern Virginia quickly became the epicenters of the northern snakehead invasion. Fisheries in both states encouraged anglers to begin targeting snakeheads. Snakeheads are, after all, exactly what anglers desire in a game fish — large, aggressive, strong and delicious, making them a prime species for sport fishing.

Now, after almost two decades with snakeheads swimming in our waterways, there is no conclusive evidence that these fish have negatively disrupted the ecosystems where they currently exist. In fact, some will argue that the presence of snakeheads have more positive outcomes than negative. Many scientists agree that more research will be necessary to determine any negative environmental impacts of the snakehead species.

Joe Bruce, outdoor writer and author of “Fishing for Snakeheads,” believes this to be true. I consider Bruce to be the foremost expert on catching snakeheads in Maryland. I talked to Bruce about the impact of snakeheads at a recent meeting of the Mason-Dixon Outdoor Writer’s Association.

“The nature and habits of the snakehead lend themselves well to waters that are often too shallow and too weedy for regular boat traffic … they’re muddy and they have low oxygen content that won’t support most of the predators that we normally fish for,” Bruce said.

Bruce believes the snakeheads are filling a niche and providing anglers an exciting opportunity while taking pressure off the other fishing venues.

“Though it is an invasive species, the northern snakehead could be of benefit instead of being cursed as a fish that will destroy the environment,” Bruce said. “They can survive and even thrive in just these sorts of conditions, turning those previously unproductive, underutilized waters into exciting fishing destinations.”

The popularity of snakehead fishing has grown almost as rapidly as the invasive fish is expanding throughout the tidal tributaries of the Chesapeake Bay. In Maryland, snakeheads began thriving in the tidal creeks in the lower Potomac River system and have over the years migrated their way northward into the Susquehanna watershed.

The Blackwater River and its tributaries just south of Cambridge have become the more recent destination for anglers in search of the notorious northern snakehead. Here, in the seemingly endless shallow and weedy waterways, the northern snakehead has become the apex predator feeding mainly on bull minnows.

Despite the grueling heat in mid-July, my son, Nathaniel, and I spent a hot afternoon fishing for snakeheads on the Little Blackwater River. It was this same location that we each landed our first snakehead catches in August 2020. Using spinning gear and a Z-Man chatterbait lure, Nathaniel landed two snakes that day, including a 12-pound monster that measured close to 3 feet in length. I used an articulated pike fly to land a much smaller snakehead while using my fly rod.

On our recent excursion into snakehead waters, we arrived at the kayak launch in the Blackwater National Refuge during the late morning hours. The sun was high and the breeze was slight. Nathaniel found success once again casting lures. His spinning reel was rigged with white 40-pound braided line with a white chatterbait. I was using an 8-weight fly rod with a clear sinking tip striper line with a 3-foot 30-pound tippet. I was casting a 6-inch white/blue Clouser minnow streamer fly.

Nathaniel had the hot rod, landing four snakes by working the edges of the thick spatterdock cover while I managed to land only one with my fly rod. We fished until 6 p.m., when a thunderstorm approached. With five fish in the cooler, we decided to call it a day.

As table fare, snakehead fillets are delicious any way you decide to prepare them. Snakeheads have white, firm flesh that has no fishy taste. The mild flavor tastes great when fried, baked or grilled with olive oil and just salt and pepper or Old Bay as seasoning. Deep fried with batter or bread crumbs is excellent or grilled after soaking the fillets in a marinade is also a good choice. The firm flesh holds up very well on a hot grill.

The writer states "Now, after almost two decades with snakeheads swimming in our waterways, there is no conclusive evidence that these fish have negatively disrupted the ecosystems where they currently exist."

How about this from a 6/15/21 article on the Middle Susquehanna Riverkeeper web page: http://www.middlesusquehannariverkeeper.org/blog/specialist-invasive-snakehead-impacts-aquatic-ecosystem-on-many-levels where it includes the following "“A report from Maryland, where they were doing a fish community survey, showed the shocking fact that snakeheads negatively impacted every fish species within a waterway except for common carp and sucker fish. That is very concerning.” In addition, snakeheads can carry certain viruses and bacteria that can further impact the aquatic ecosystem. Among those threats is mycobacterium. "Mycobacterial infections are not unusual among fish, but they are nonetheless noteworthy because they can have an impact at the population level and potentially even affect other fish and wildlife," said Christine Densmore, a veterinarian with the United States Geological Service and lead author of a report on the mycobacterial impacts of the snakehead. Hartzell admitted that a virus that impacts largemouth bass is also associated with the snakehead. “There is a virus that caused issues in largemouth bass in the early 2010s. It caused the bass to be lethargic, created sores and was a pretty big detriment to the bass population,” Hartzell said. “Snakeheads can be carriers for this virus. Their impact is a double whammy – they effect competition within a waterway, but also can bring disease.”

A Maryland DNR report was less conclusive but did write that "We conclude that northernsnakehead populations can reduce biomass of multiple fish prey species through predation. This could explain some observed changes to aquatic communities in Blackwater River drainage (Newhard and Love 2019)."

Finally from The Potomac Conservancy, it includes the following "Unfortunately, recent research conducted in the Blackwater and Little Blackwater Rivers in Maryland suggest that snakeheads are driving down the population size and biomass of native fish species.

How do they know? The researchers conducted the same survey in 2006-2007, before snakeheads reached those rivers. Comparison of the data from the two surveys indicates that 17 of the 21 native species saw declines (ranging from 30 to 97 percent).

By looking at the stomach contents of 125 caught snakeheads, scientists were also able to see what the invaders are preying on the most. Their diet included significant amounts of gizzard shad, bluegill, American eel (already a suffering species!), and dragonfly larvae."

Good to see FNP continuing to encourage anglers to continue to pursue these invasive fish. Aggressively fishing the snakehead seems to have little to no downside.