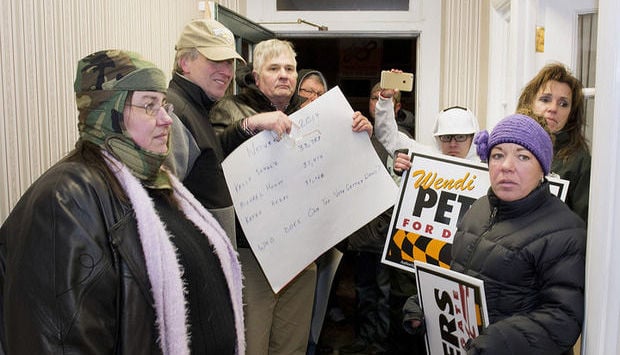 About two dozen protesters attempt to enter the Frederick offices of lawyer Rand Weinberg on Wednesday night to attend a meeting of the Republican Central Committee. 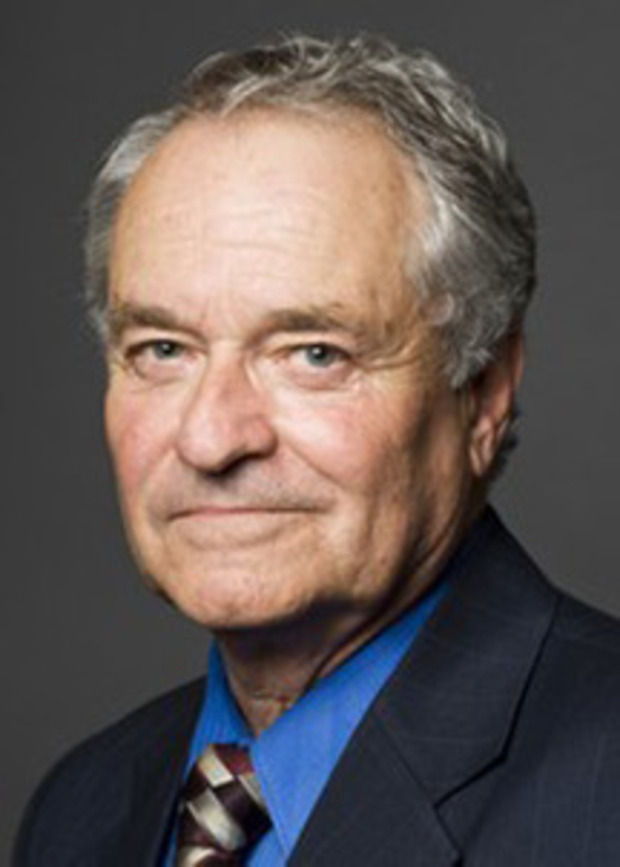 About two dozen protesters attempt to enter the Frederick offices of lawyer Rand Weinberg on Wednesday night to attend a meeting of the Republican Central Committee.

Ciliberti beat out another former delegate, Paul Stull, in securing the support from a majority of the Frederick County Republican Central Committee, according to a news release. The committee declined to release the exact vote count.

"We are very excited to have selected Dr. Ciliberti as our nominee in District 4. He has a wide range of experiences that will be beneficial as he serves the citizens of Frederick and Carroll counties," committee chairwoman JoeyLynn Hough said in a written statement. "I believe that Dr. Ciliberti will serve us well and stick to his conservative principles and be a valued ally of Governor-elect Hogan."

The recommendation will now go to Gov.-elect Larry Hogan for a final decision. Since a small piece of Carroll County also lies in District 4, the GOP committee in that jurisdiction will also nominate someone for the post.

Last week, the Frederick County committee whittled down the list of applicants from 18 to three. One of their picks, Christopher D. Glass Sr., did not appear for an interview Wednesday, leaving only Ciliberti and Stull in the running.

Ciliberti served in the Maryland House of Delegates as a Montgomery County representative in the 1990s, while Stull represented District 4A from 1995 to 2011. Ciliberti has also been a small-business owner, professor and U.S. State Department official, according to a committee news release.

The committee's Wednesday night meeting took place in the downtown Frederick offices of lawyer Rand Weinberg. On a frigid sidewalk outside the front door stood a bundled-up and shivering group of about 20 protesters upset that Wendi Peters was not one of the three finalists for the delegate seat.

Near the meeting's start, the protesters entered Weinberg's office and demanded admittance to the meeting. A security officer told the protesters they were on private property and ordered them from the building, said Jill King, who helped coordinate the protest.

Hough said the central committee's bylaws stipulate that the interviews and nomination are closed to the public.

Peters was on the District 4 primary ballot earlier this year along with Ciliberti and three others. She beat Ciliberti by 601 votes, but as the fourth-place finisher overall, she was one spot shy of moving on to the general election.

Peters' backers say the central committee should have considered that she was next in line in the primary vote totals. The committee also failed to account for the flood of supportive messages that accompanied her application for the District 4 seat, her supporters argue.

Billy Shreve, a central committee member, said his group followed the bylaws and used the same nomination process that have been in place for years.

Peters said she was not behind Wednesday's protest and did not attend it. However, she said the committee's decision not to include her as a finalist had disenfranchised voters.

"They're not listening to the public demand," King, a local Republican who helped organize the gathering, said in a phone interview.

King does not accuse the committee of breaking its bylaws but does believe the process so far has political undertones. Several of the nine central committee members have ties to Sen.-elect Michael Hough, whose wife is the group's chairwoman. During the election earlier this year, Hough ran on a slate with Ciliberti; Peters was supported by Hough's opponent, Sen. David Brinkley, R-District 4.

Shreve said the committee simply stuck to the process outlined in their bylaws.

The search for a new delegate began after Hogan appointed Schulz as Maryland's secretary of labor, licensing and regulation. The District 4 seat is expected to become vacant when Schulz resigns her delegate seat, a move she intends to make when the state Senate lawmakers approve her Cabinet appointment.

Due to an editor's error, an earlier version of this article's photo caption didn't include Barrie Ciliberti's last name.

"Billy Shreve, a central committee member, said his group followed the bylaws and used the same nomination process that have been in place for years."

Tradition is poor reason to using a flawed process.

"....to continue using a flawed process."

Obviously, for the FCRCC the rules are obviously made for them (and the ability to change them any time and as needed) and not for the rest of us who are beneath them. Let this be notice to them that a change in central committee membership will be agenda item #1 for us common folk in the next state general election. As Pogo once remarked, "We have met the enemy and they is us". Shame on all of you.[thumbdown]

Why are all of you posters so angry at the way Ciliberti was selected?

When the FC Republican Committee supports people like Young, Delauter, Shreve, and Smith why would you expect them to behave in an acceptable way? They are simply doing what they do best, lie, cheat, and make illegal decisions behind illegally closed doors.

Sadly, I have an 'R' after my name, but I fear not for very much longer.

What ever the label you put on your forehead, a LIE is still a LIE.

The FCRCC is an incestuous mosh pit of low talent sophists dancing to the strings of a puppet master in his office. The R-party of Frederick County needs a major overhaul.

Personally I think the R-party and the D-party in the entire country needs an overhaul!

How close do YOU want to get to this sharade?

And what to my wonderous eyes should appear when looking for a secret non disclosed cancelled closed meeting but a sign for the offices of Rand Weinberg. To make my toes warm in the 12 degree temperature Billy Shreve walking down the street then into the door. The smoke and the mirrors were in full form as we awaited the white smoke to leave the chimney as the new Delegate was selected. Now having Wendi on the list would have been the right and smart thing to do but to place 3 Hough cronies on the list was a slap in the face of all in Frederick and Carroll Counties. To handle this meeting this way by skirting the rules invalidating the citizen and their voice is more Frederick County politics at its worst. More of what I saw and despised during the BOCC hearings involving development. Just amazing those who supported that behavior saw it in full force last night in the bitter cold with the RCC representatives nice and warm. Kind of like a scene in Dr Zhivago.

It's not really a democratic process when a few get to decide who holds the seat - there should be a special election. It would be entirely different if there were only a short time left of the term - but this term is just starting. Sadly we really don't live in a democratic country - we just tell ourselves we do.

Gee do you democrats actually know the republicans won, its over for the spending democrats.[wink][thumbup]

Blaine Young, republican, gave residential developers a $160,000,000 government handout. Then he was rejected by the voters.

I'd say its over for the spending Republicans, except that Delauter and Shreve want to hire more government staff, increasing spending and the size of government.

Haven't they already announced their INTENTIONS from day one of this NEW style of governance mand administrration?

Look at those democrats trying to get in to rule.SMILE[beam][wink][smile]

So the FCRCC, when picking "finalists," completely ignored Wendi Peters, instead choosing someone who didn't even bother to show up for the interview, and they ended up nominating someone who received 601 fewer actual votes than Ms. Peters received in the actual election.

Seeing how this mess has ended. Kelly should decline the appointment and retain her seat. To do otherwise disrespects those who voted for her and are now betrayed by the Frederick County Republican Central Committee.

No surprise here. Everyone should've known this was coming. It was a foregone conclusion. Cilibert was on Hough's 'slate' along with Afzali and I'm sure they both wanted Cilibert on the delegation. His wife is runs the committee. As soon as they were taking applications, we already knew who would get it. Even if Wendi Peters made the short list, she never had a chance. Unfortunately for me, I live in District 4. Which is also Frederick County District 5 - Kirby country.

Jgrose79, as of the time of my interview no bylaws were broken.
Timeline:
12:00 Jan 7, FCRCC cancels meeting.
8:00 Meeting takes place. They do not open the session in order to close it, per bylaws. Police are called, when group gains entrance to attend.
9:15 Protesters disperse.

"Larry Helminiak, vice chairman of the Carroll County Republican Central Committee, said his committee has watched in approval as Frederick County Republicans have searched for a nominee. Members of the Carroll County committee plan to use the same process, although they will seek to make the selection more private to minimize any controversy surrounding it, he said."

This just happens to be Hough's children's godfather. Does anyone think he will do the right thing?

The location of the meeting should be conclusive proof that the leadership of the local GOP are mere puppets, whose strings are pulled by the developers.

They did break the by-laws of the committee. They have to have a monthly meeting. This was that meeting. They changed the meeting place to be secretive which is illegal. 7 days notice must be given to the public. Also, prior to a private closed door executive session taking place, a mandatory public comment and open meeting must be established first. Then the meeting can be called into executive session. These are the rules of the by-laws. Hough and Shreve are incorrect and lying as usual. Larry Hogan and the MD GOP are going to be notified and there will be repurchasing for their actions.

As Long as You Can See Into the Window, It's an Open Meeting...

Billy (I want a hashtag too) joins a not-so-secret group to have a secret meeting at Rand Weinberg's Law office to select a nominee to replace Billy's girlfriend. Hough's wife along with Rand and Billy lock the doors and any voice from rank-n-file Republicans.

Looks like Rand and Billy have taken their former roles as County Commissioners (Rand as Commissioner Emeritus) and teamed up with Michael Hough's wife to continue business as usual.

It will continue as long as people don't get involved and clean house.
Name recognition on the ballets should be a good clue who NOT to vote for.

A political committee makes a decision about a political position and one of Moe Young's biggest supporters Jill King "believe(s) the process so far has political undertones." BRILLIANT, Jill, BRILLIANT!

What is it about being LIED to such a comforting notion for change?