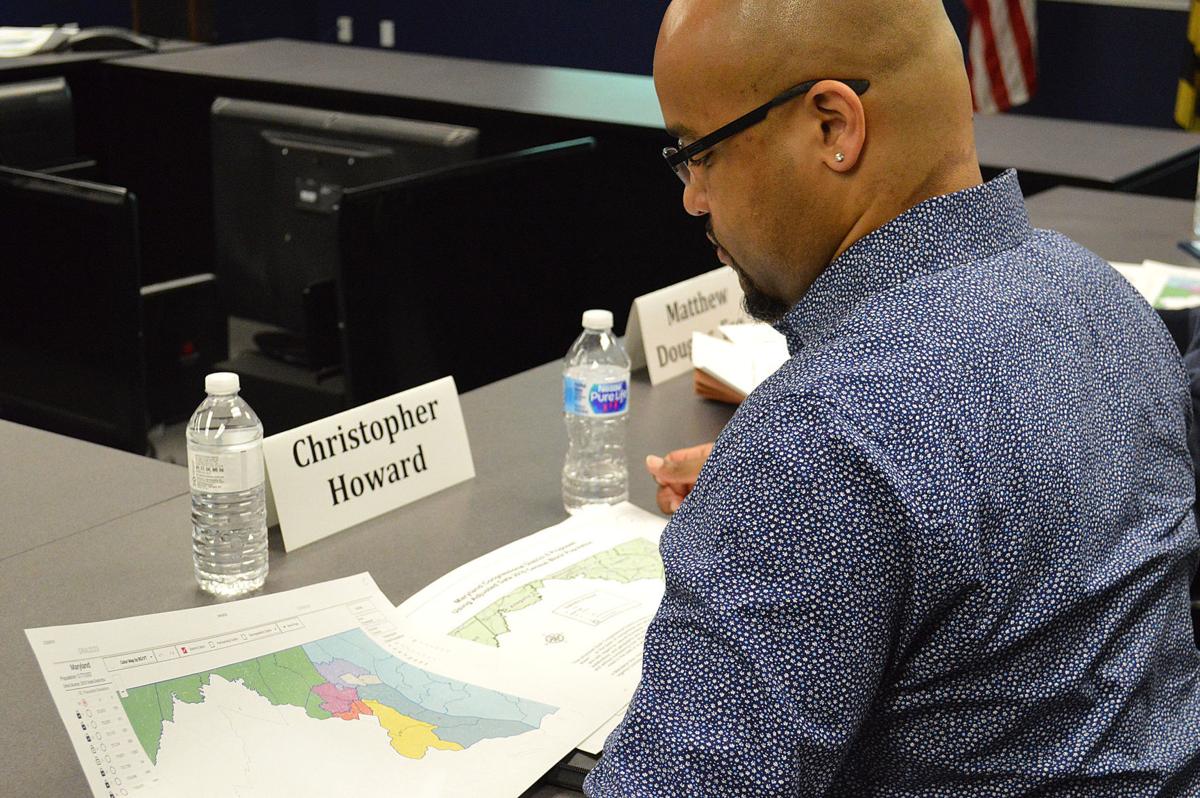 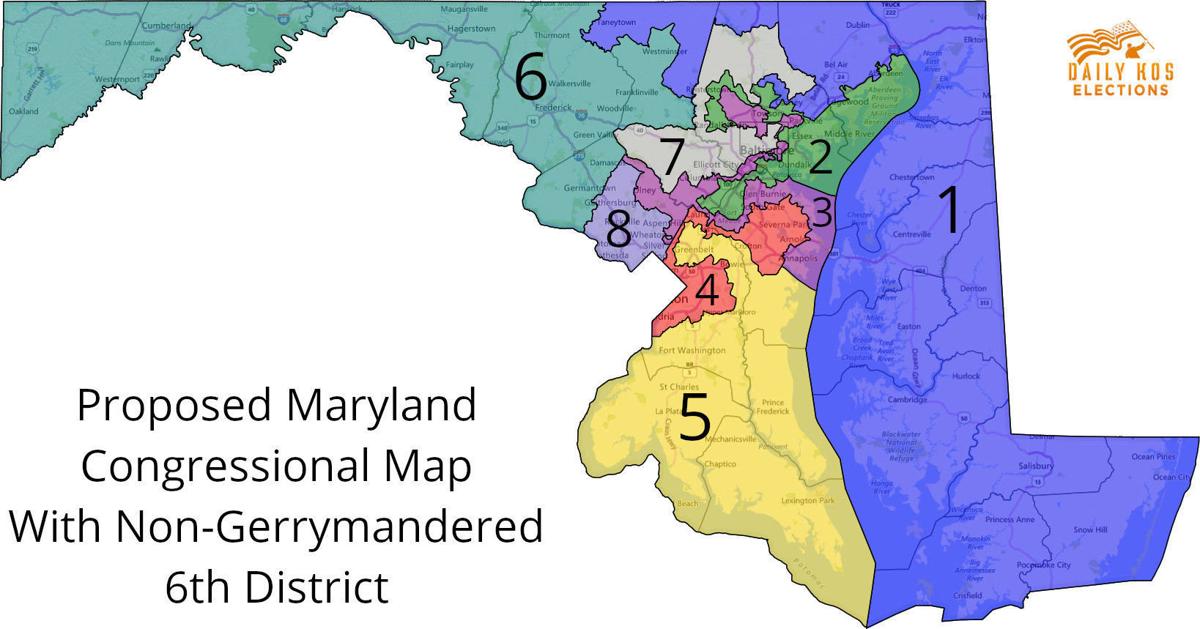 This map submitted by a national redistricting enthusiast was selected Friday as the way to redraw Maryland’s 6th and 8th congressional districts ahead of the 2020 election. 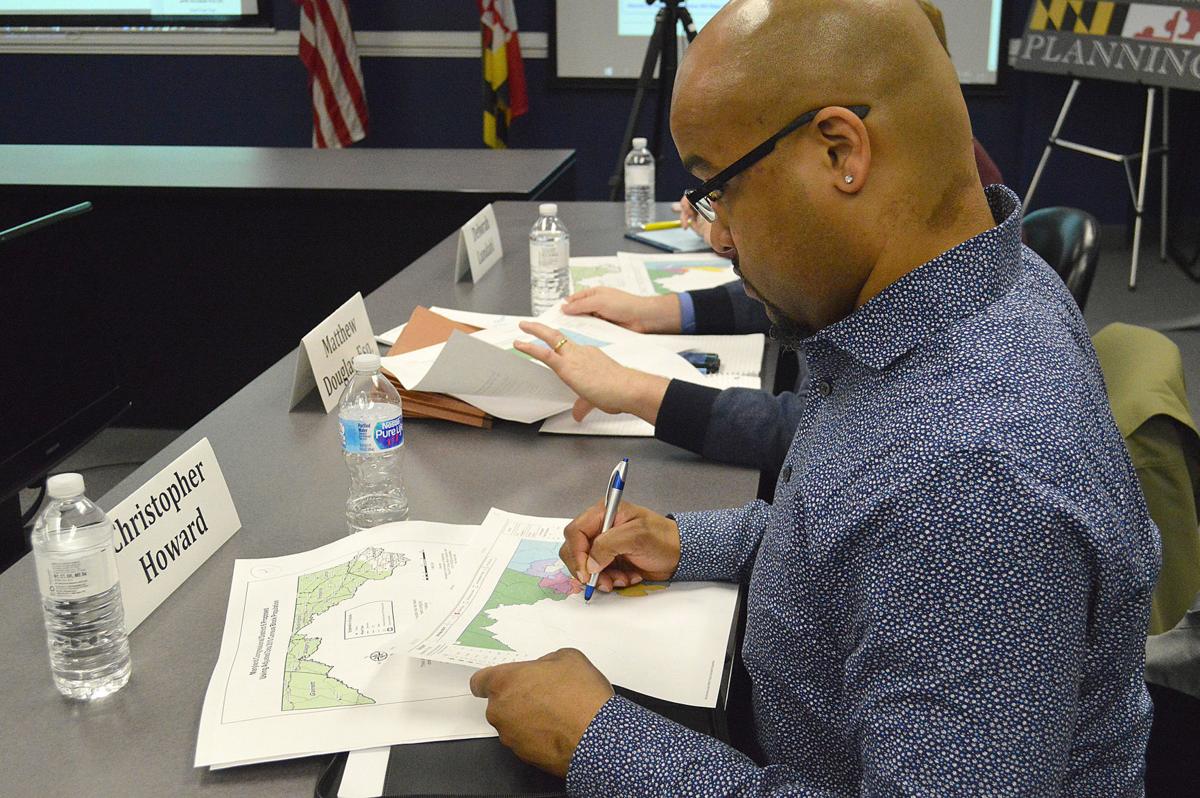 This map submitted by a national redistricting enthusiast was selected Friday as the way to redraw Maryland’s 6th and 8th congressional districts ahead of the 2020 election.

ANNAPOLIS — A map submitted by a national redistricting enthusiast was selected Friday as the way to redraw Maryland’s 6th and 8th congressional districts ahead of the 2020 election.

The mapmaker is Stephen Wolf, who has spent the last two years writing for the Daily Kos, which is a liberal organization that aims to elect Democratic candidates, but takes a nonpartisan stance on redistricting, according to its own description. His map will move Frederick County and the southern half of Carroll County back into the 6th District along with the northwest side of Montgomery County.

“I knew that he was active and I knew I’d seen his name in relation to redistricting, but I didn’t look him up,” said Walter Olson, the Republican co-chair of the governor’s Emergency Commission on Sixth District Gerrymandering.

Wolf earned a bachelor’s in political science at the University of North Carolina and grew up in that state, which he describes as the “epicenter” of partisan gerrymandering.

“I have no personal connection to Maryland, but I knew Gov. [Larry] Hogan was forming the commission because of my coverage of the lawsuit and court ruling. I decided in January to submit a map after previously submitting an amicus brief to Pennsylvania’s Supreme Court when it struck down and redrew the state’s congressional gerrymander last year,” Wolf said by email on Friday.

Hogan (R) formed the emergency commission at the end of 2018 to meet a federal court order to redraw the 6th District ahead of the 2020 election.

The nine members of the emergency commission unanimously accepted Wolf’s map on Friday as the best way to redraw the 6th District while causing the least disruption to the rest of the congressional districts. Their second choice was a map drawn by Olson, who based his map on Wolf’s.

The group deferred to Wolf’s public submission to show it valued the public’s participation in the process.

“When it’s a close call, listening to the public and using the public input is important,” said Matt Douglas, an unaffiliated voter who is also on the commission.

However, Wolf’s affiliation with the liberal organization was not made clear before or during the group’s discussions of the proposed maps. Olson too was unaware of the connection until he was contacted by The Frederick News-Post on Friday evening, but he stood by the commission’s vote.

To avoid partisan influence, the nine-member commission is a combination of three registered Republicans, Democrats, and unaffiliated voters.

“I’m not concerned because the nature of the process is everyone’s invited to submit. ... If a good idea comes in, it should be given fair consideration, which we did,” said Olson, who is a senior fellow at the Cato Institute’s Center for Constitutional Studies.

Olson further defended Wolf’s map as the best solution to the problems identified by the courts for districts 6 and 8.

“Since only one district was struck down and courts have typically preferred that remedial plans alter as few districts as possible in similar instances, I aimed to only redraw two districts to satisfy the court’s ruling,” Wolf said.

“The principles guiding this particular proposal were to undo the current gerrymander and in doing so avoid unnecessary divisions of counties and cities while keeping the redrawn district lines compact,” he added.

After drawing the map, Wolf recalculated the 2016 election results, which swung the 6th District from one that supported Hillary Clinton by a 55-40 margin, to a district in support of President Donald Trump 52-43. That would have been a 24-point swing toward Republicans, according to Wolf.

“Given that Democrats have won the existing 6th this decade by margins ranging from 1 point in 2014 to 21 points in both 2012 and 2018, this shift likely would have been enough to ensure Republicans held the 6th District this whole decade,” Wolf wrote for the Daily Kos.

The origin of Maryland’s need to redraw the 6th District comes from a lawsuit brought by seven residents, including three from Frederick County, who argued that the 6th District was unconstitutionally gerrymandered to favor Democrats and punish Republicans during the redrawing process after the 2010 census. The case was appealed to the U.S. Supreme Court in March 2018.

The case has since been appealed again by Maryland Attorney General Brian Frosh to the Supreme Court, which agreed to hear the case at the end of March.

The governor has also introduced two pieces of legislation in the 2019 General Assembly that would provide sweeping changes to how Maryland draws its congressional and legislative districts. Ali Keane, deputy legislative officer for the governor, presented the bills to the Senate on Thursday.

“We recognize that Maryland is not the only offender. There are states all across the country — no matter which party has the majority — that are guilty of gerrymandering. But Maryland should be a leader in the reform and should not be rated as having the most gerrymandered district in America,” Keane read from prepared remarks.

Olson and retired U.S. Judge Alexander Williams, the Democratic co-chair of the emergency commission, also spoke in support of the bills. Despite his tenure on the bench, Williams said he was opposed to having the court dictate how the state should draw its voting districts.

“I just resent the idea of having courts draw lines. I don’t like that, and I think that we should avoid a flood of litigation that’s going to take place in the next few years and just bite the bullet and come together and put together a fair, independent redistricting commission,” Williams said.

For now, the state will focus on approving a map for the 2020 presidential election, which could very well end up being the one Wolf drew.

“We’re thrilled that the commission selected the map I drew, and we hope the Supreme Court upholds the lower court’s ruling and sets a precedent that can be used to strike down gerrymanders across the country,” Wolf said.

as far as i am concerned Donald trump is not a liar or a cheat.he has so far held true to his promises,the real problem is all of the trump haters prevent him form doing his job.

And those of us in Frederick County have something in common with Garrett, Allegheny and Washington Counties? Are we that crazy to vote for a liar, cheat and traitor like Donald Trump?