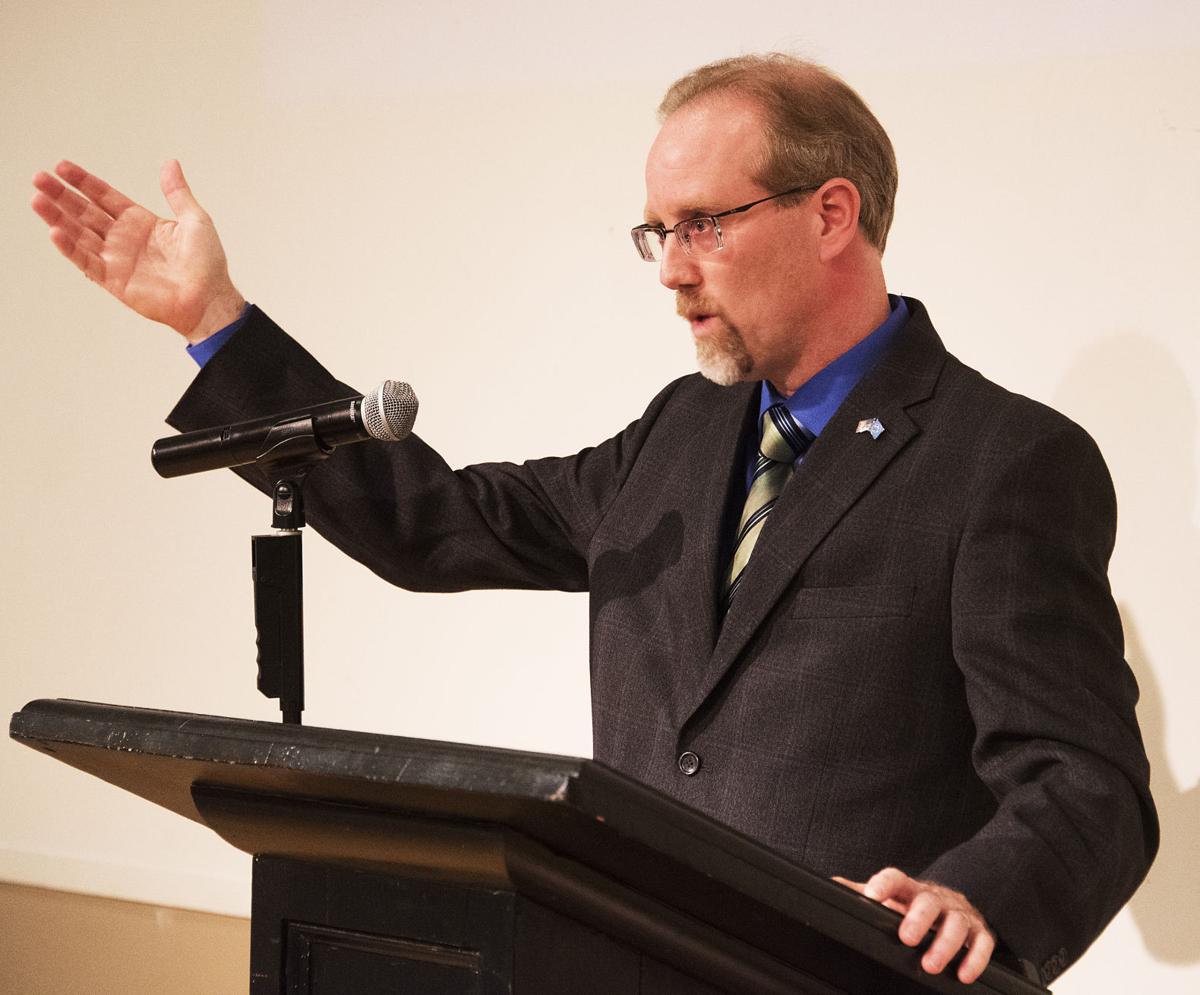 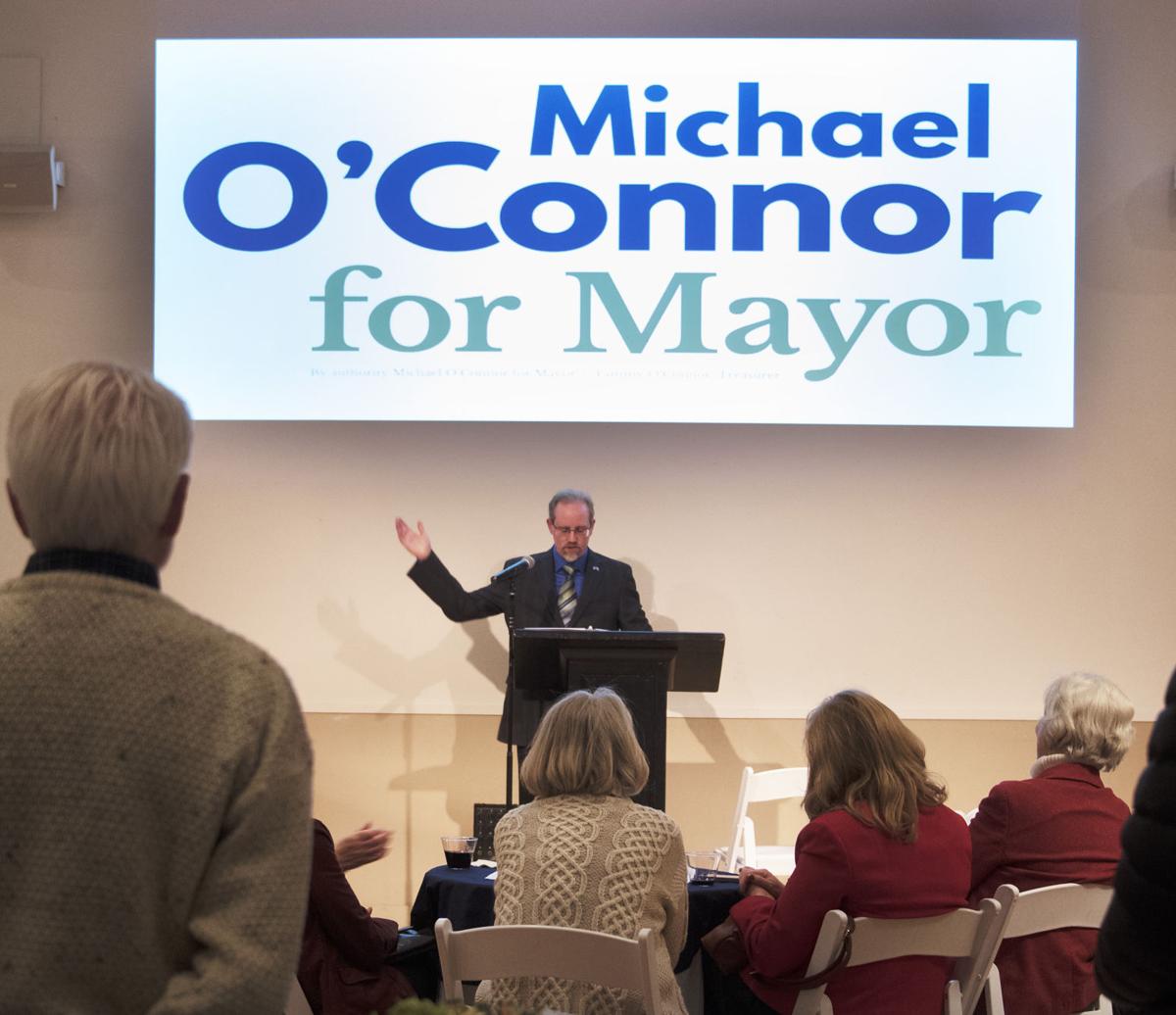 Alderman Michael O’Connor announces his run for mayor of Frederick on Friday at the Delaplaine Visual Arts Education Center. 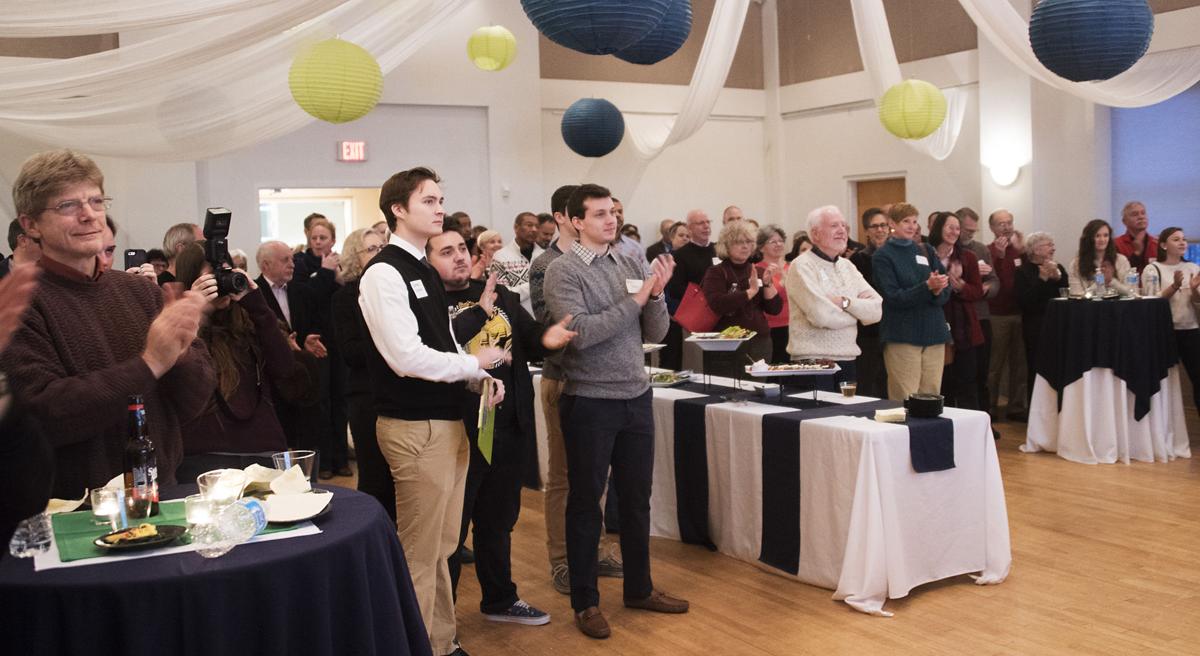 Supporters at the Delaplaine Visual Arts Education Center applaud as Alderman Michael O’Connor announces that he is a candidate for the office of mayor of Frederick on Friday. 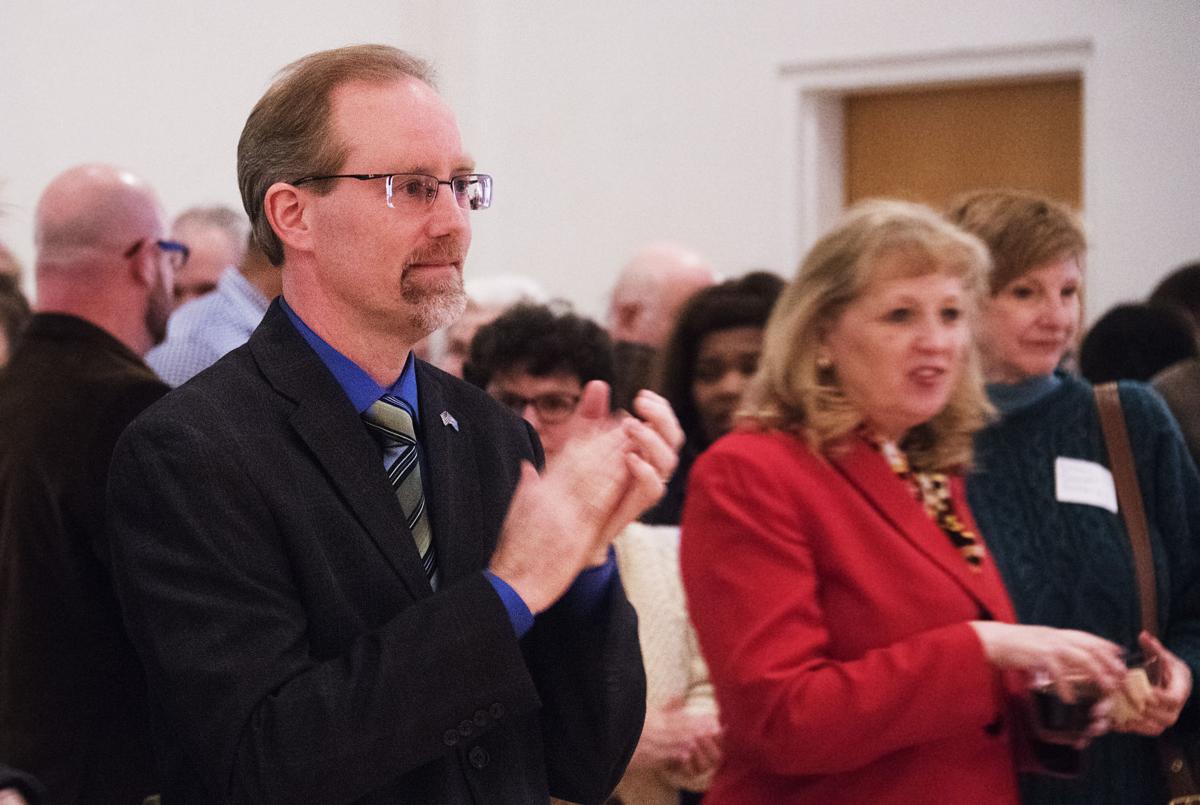 Alderman Michael O’Connor applauds as Alderman Kelly Russell introduces him at a gathering at the Delaplaine Visual Arts Education Center on Friday evening. O’Connor announced that his is a candidate for mayor of Frederick. 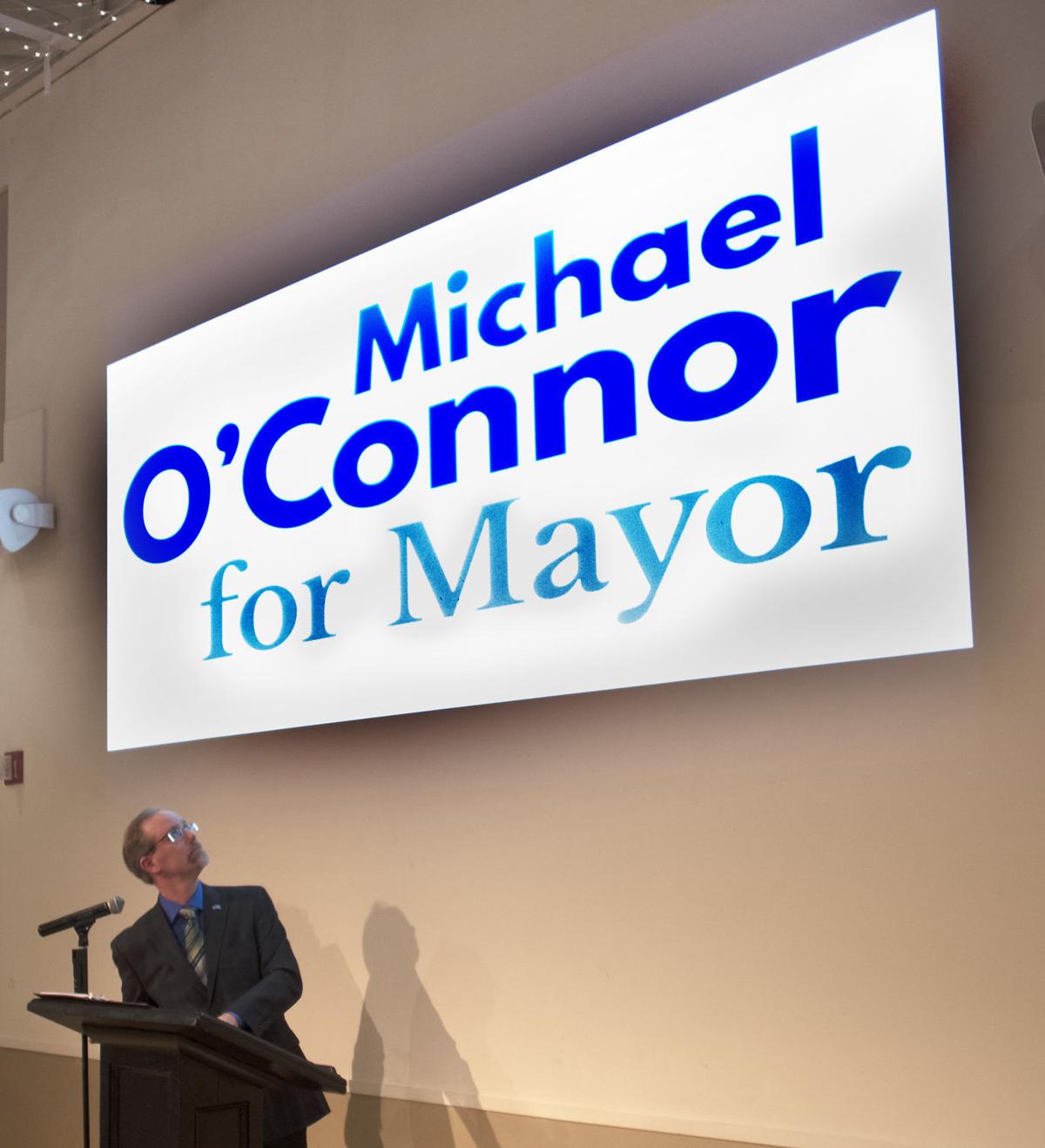 Alderman Michael O’Connor glances up at the projected slide that appeared on cue as he announces that he is a candidate for mayor of Frederick on Friday.

Alderman Michael O’Connor announces his run for mayor of Frederick on Friday at the Delaplaine Visual Arts Education Center.

Supporters at the Delaplaine Visual Arts Education Center applaud as Alderman Michael O’Connor announces that he is a candidate for the office of mayor of Frederick on Friday.

Alderman Michael O’Connor applauds as Alderman Kelly Russell introduces him at a gathering at the Delaplaine Visual Arts Education Center on Friday evening. O’Connor announced that his is a candidate for mayor of Frederick.

Alderman Michael O’Connor glances up at the projected slide that appeared on cue as he announces that he is a candidate for mayor of Frederick on Friday.

With a shoutout to family, friends and colleagues, Alderman Michael O’Connor on Friday became the first person to publicly declare plans to run for mayor of Frederick this year.

“While I believe that Frederick has made progress in many areas, the lack of a comprehensive vision for the city makes that progress disparate and unfocused,” the two-term Democratic alderman said at a reception at the Delaplaine Visual Arts Education Center, before revealing his plans to seek the mayoral seat.

“There is a perceived lack of urgency, a sense that all priorities, all neighborhoods, all residents don’t get the same attention,” he continued. “I want to change that. For Frederick to move forward, we must move forward together. So today, I announce my candidacy for mayor of the city of Frederick.”

The mayor and all five aldermen are up for re-election for the four-year term that begins in 2018. A primary election is slated for Sept. 12, followed by the general election Nov. 7.

Mayor Randy McClement, a Republican, has remained mum on whether he plans to seek re-election and declined to comment on the subject again Friday.

Another well-known name in the rumor mill for a possible mayoral bid is former Frederick Police Chief Kim Dine. A Democrat, Dine most recently retired as U.S. Capitol Police chief in August 2015.

Dine attended O’Connor’s reception Friday, but stayed noncommittal when asked about a potential run for mayor. He said he is “flattered that people have raised the issue,” but he has not made a decision.

Another more likely candidate for the office is former Mayor Jennifer Dougherty, owner of Magoo’s Pub and Eatery in Frederick. Dougherty said Friday she is “99 percent sure” she will run for office and forecast a formal announcement in the future.

The Democrat served one term as mayor after winning the 2001 election against two-term Republican incumbent Jim Grimes. Her subsequent bids for re-election were unsuccessful. She lost in the Democratic primaries in 2005 and 2009, and in the general election in 2013, when she ran as an independent.

O’Connor’s roomful of supporters at Friday’s event included Alderwoman Kelly Russell, a fellow Democrat, who introduced him and spoke highly of his accomplishments.

Phyllis Hane, the city’s legislative clerk, said Russell, seeking re-election, is the only person who has officially filed to run for city office so far.

The filing period for mayor and alderman for the upcoming four-year term kicked off Tuesday and will run through July 3.

Democratic Alderman Josh Bokee, who also attended O’Connor’s event Friday, said he is still considering a run for re-election, but has not decided yet. He said he will decide for sure over the next few months, but confirmed he will not seek another office.

Alderwoman Donna Kuzemchak, the board’s other Democrat, and Alderman Phil Dacey, the board’s only Republican, did not return calls for comment on their plans Friday afternoon.

All of the sitting aldermen except Dacey still have active campaign finance accounts, according to a database on the city’s website.

Kris Fair, chairperson of The Frederick Center, opened an account on Dec. 5, and has said he is contemplating a run for alderman. A Democrat, Fair said last month he opened a campaign account to see if his potential bid for elected office is realistic. He said Friday that he plans to issue a press release on the matter soon.

The Frederick Center describes itself as an advocacy organization for members of the lesbian, gay, bisexual, transgender and queer community and their allies.

Roger Wilson, Frederick County’s director of government affairs, also opened a campaign account with the city in July. He confirmed last month that he plans to run for city office this year, but at the time had not committed to a race. He did not return a call for comment Friday afternoon.

anyone presently in city government that is going to run for office will not get my vote. i feel that majority does not rule anymore,if it did the Taney bust would still be at city hall. what has happened with the group that was appealing the move of the Taney bust.

Appears from these few posts that the hate-Randy constituency is well represented. To many, his steady hand and friendly disposition are what Frederick needs. Last thing small businesses want are progressives that levy new onerous taxes or visionaries that press themselves upon the governed. Mayor McClement has been a positive force and a friendly face for Frederick. If you want something else, perhaps a move closer to DC might be in order.

Hopefully, the democrats will run SOMEONE better for the mayor position.

I will vote for whoever brings back the old bulk trash except for Donna K.

Too early to tell, but some very interesting candidates.

KIM DINE FOR MAYOR. HE HAS MY VOTE

"Leading everyone in song, O'Connor proves he does not have tiny hands." I like him already.

My unsolicited opinion of Michael O'Connor is that Frederick could do far worse than O'Connor for Mayor. It already has. Dougherty has caused nothing but problems both when she was in office as Mayor and in the 2013 election when the only thing her run accomplished was to re-elect do nothing McClement. Here it is 2 terms later and McClement is still a do nothing. He has no leadership qualities at all, he should never have won a second term.

I would be very disappointed if Donna Kuzemchak doesn't run again, I thought her win in the 2013 election after losing in 2009 was very telling. She was a good Alderman then and an even better one now. Dacey? He is as useless as McClement. Just check his record...absent more times than present, nor has he introduced anything meaningful to the governing of the City.

Bokee? Russell? Josh is a nice guy but niceness shouldn't win elections, he needs to address issues. Being a former policewoman Russell is a great advocate for Frederick's finest, and no one will fight harder to get everyone riding a bike. But, that's it. She is only two dimensional, she doesn't seem to be able to champion any other causes, and quite frankly, while advocating for the police works, I think she owes the citizens a bit more than just fighting for bike lanes...especially on highly used and dangerous roads.

And then there are the whispers of Roger Wilson running for office. If he decides to throw his hat into the ring it is a win-win for the residents of the City. He would make an outstanding Alderman, but as Mayor? Frederick will sparkle and shine under a Wilson Administration. My advice to voters? Learn all you can about the candidates and the issues currently facing the City. Demand that all candidates answer your questions and give you solutions, not just honeyed words. Toss your party affiliation away for this election because Frederick doesn't have any issues that are affected by either party stance. Vote only candidate and issue...and most importantly....VOTE!

Donna Kuzemchak is an interesting prospect, she has certainly shown a lot of interest in helping the City of Frederick.

How so Dick? The which hunt at the golf course? The Rodger Taney bust?

Well Rbtdt5 Donna did not lead a witch hunt at the golf course. Several individuals who witnessed the corruption reported it. Kuzemchak's only goal was to make certain that the citizens of Frederick were not being ripped off by those in charge of the golf course. The Roger Taney bust? Really? Wow. I thought it was silly to move it, I still think it was a silly idea, however, the last I heard majority still rules in a democracy and if the majority of residents wanted it moved who are you or me for that matter to stand in their way? Sorry, but those are two very poor reasons for not voting for Kuzemchak. As I said earlier, check her record and you will see for yourself that she is the only Alderman who is actually concerned with the well being of the citizens of Frederick.

That was pretty good, Bst. Would have written it myself, but do you think Rabbit will listen?

I could see me voting O'Connor but I need to see who else is running. I'm not the fan of Donna that you seem to be and I think higher of Russel. Dacey and Bokee have done nothing to get another vote for me. For that matter Donna doesn't get another vote either.