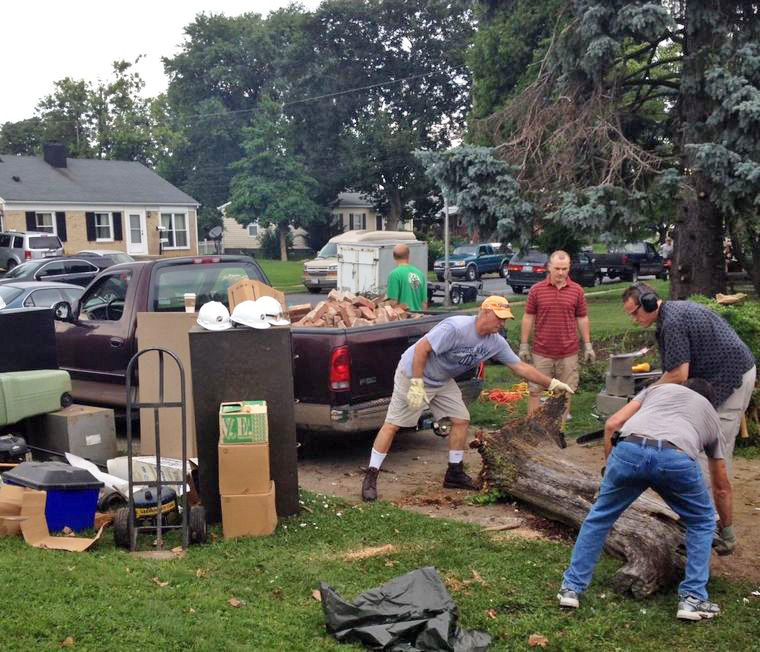 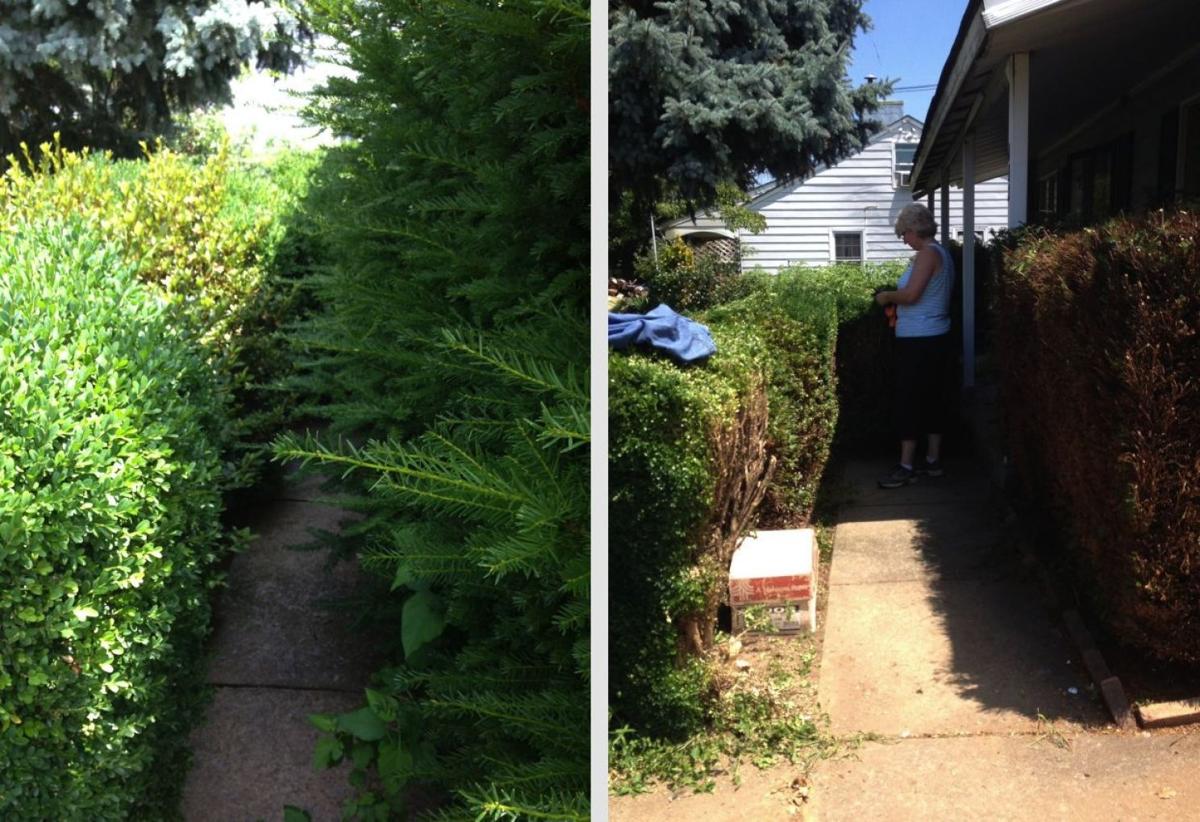 Overgrown bushes blocking the front door were among the violations that placed a Carrollton Drive home on the city’s blighted property watch list. Thanks to volunteers and neighbors, the bushes have been cut back to meet city code requirements. 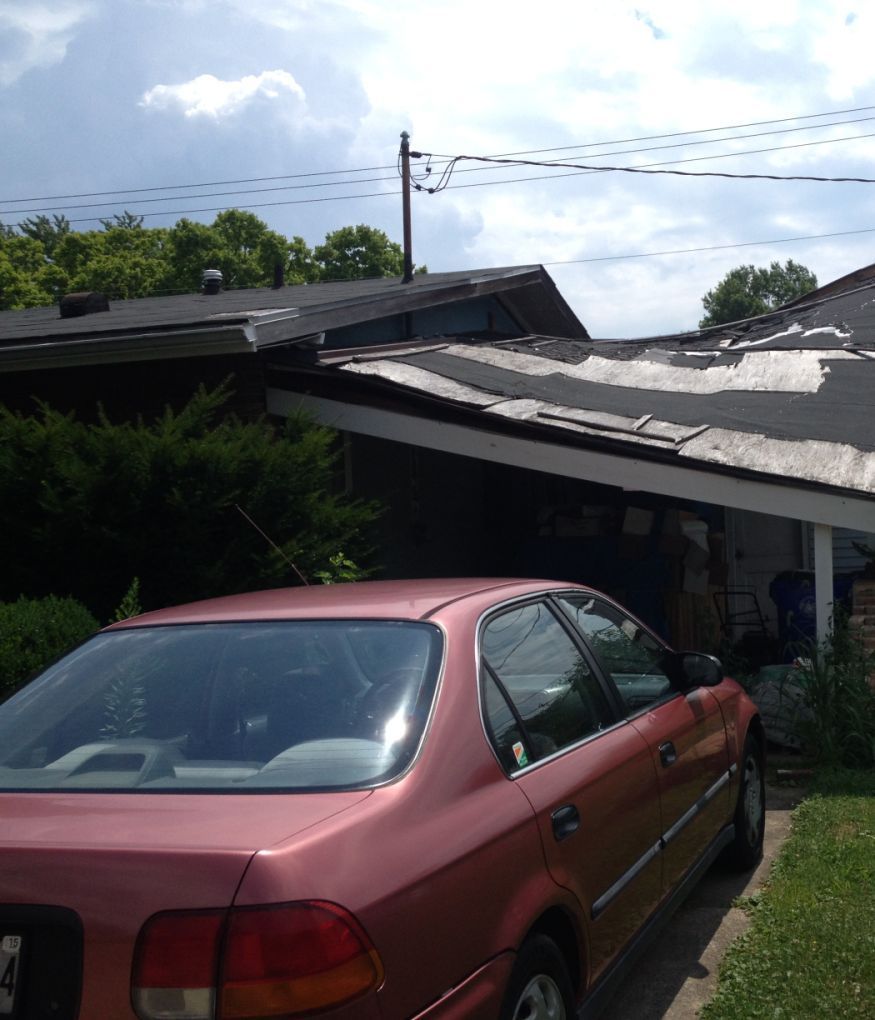 A crumbling carport posing significant safety hazards was one of several violations that placed a Carrollton Drive home on the city’s blighted property watch list. Thanks to volunteers and neighbors, the carport has been removed. Photo courtesy of Brittany Parks, code enforcement inspector.

Overgrown bushes blocking the front door were among the violations that placed a Carrollton Drive home on the city’s blighted property watch list. Thanks to volunteers and neighbors, the bushes have been cut back to meet city code requirements.

A crumbling carport posing significant safety hazards was one of several violations that placed a Carrollton Drive home on the city’s blighted property watch list. Thanks to volunteers and neighbors, the carport has been removed. Photo courtesy of Brittany Parks, code enforcement inspector.

A rapidly collapsing carport, leaking roof, and trees and bushes so overgrown they completely blocked the front door — these are just some of the safety issues and code violations that earned Jim Stirewalt’s Frederick home a spot on the city’s Blighted Structure Watch List last June.

Age, health and finances had conspired against Stirewalt, who paid a citation but was not able to make necessary repairs. The Carrollton Drive property was a month away from being condemned, which would have forced Stirewalt to leave his home until it was brought up to code, according to Brittany Parks, a city code enforcement inspector.

“It was a very urgent situation,” she said.

Nearly a year later, Stirewalt hasn’t been evicted. But his home bears little resemblance to its prior incarnation awash with safety hazards. The crumbling carport is gone, the roof patched and new shingles laid down, trees and bushes trimmed and not a single trace of the trash previously strewn about the yard.

Credit for the transformation belongs to countless community members who responded to the plight, including the volunteers at South End Baptist Church, led by Greg Wills, a ministry assistant there.

“They donated so much manpower and materials and time,” said Michele Bowman, community outreach coordinator for the City of Frederick and Frederick Police Department.

Church members teamed up with volunteers from Habitat for Humanity of Frederick County, neighbors and even code enforcement officers to tackle the property’s exterior problems throughout last summer.

“We had contractors, plumbers, people with every skill,” Wills said. “Everyone dropped in for a few hours. We even had families, with kids helping pick up the rubbish.”

All supplies were donated, including the new roof shingles provided by Habitat.

Stirewalt, whom Parks first described as hesitant to take any action to resolve the property violations, also came around as work progressed.

“Once he realized the severity of the situation, he was a lot more willing to work with us,” she said.

Though progress stalled over the cold winter months, Wills and his team have resumed work with a focus now on the inside of the house.

A component of the property violations relate to what Parks described as Stirewalt’s “hoarding problem.” Stirewalt declined to comment for the article and refused to allow The Frederick News-Post on his property.

According to Wills, who has worked inside the home — most recently he and his team replaced the kitchen ceiling — Stirewalt’s collection is not the typical hoarder’s stash of junk, but neatly-piled newspapers, books and some sentimental items.

Persuading Stirewalt to let go of some of his collection, or at least reorganize it in boxes not soaked by water from his previously leaking roof, is an ongoing process, Wills said. But his gratitude for the volunteers’ work is apparent.

South End Baptist’s parishioners have helped many other homeowners, including widows and widowers and neighbors, but this was their first foray into the realm of blighted properties.

“I think because this house was so close [to the church], it really touched them to go out and do something,” Bowman said.

To Wills, it’s as simple as neighbors helping neighbors.

“Unfortunately, you just don’t see neighbors caring for neighbors that much anymore,” he noted.

Thanks to the work of Stirewalt’s neighbors, Parks said she hoped the property would be violation-free by the time of the re-inspection this summer. If Stirewalt keeps his property up to code for the next year, 452 Carrollton Drive will be erased from the blighted properties watch list.

For all stories related to blighted and vacant properties in the city of Frederick, visit www.fredericknewspost.com/blight.

Some blighted properties in Frederick brought up to code, others stall

City of Frederick staff has made progress in the last nine months to rid the city’s streets of vacant and blighted properties, but has hit roa…

This is how private-public partnerships work. I am all for condeming blighted properties and do not believe the law should be changed. However, there is nothing wrong with the community pulling together to make things right for those in need. If this was a slum lord, no one would pull together to help and the system and law would work.