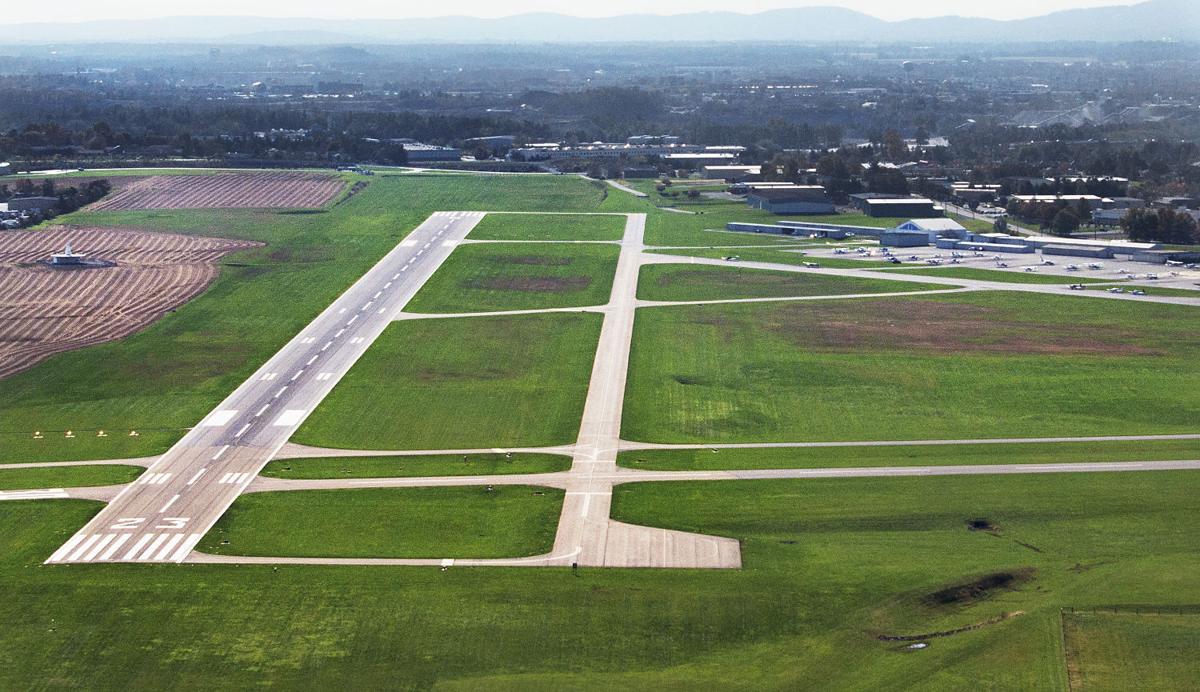 This aerial photo taken in October shows Frederick Municipal Airport with the runway to be extended at the left.

Frederick Municipal Airport will receive about $4 million in grants to extend the runway at the left in this photo. Part of the money will be used to remove buildings near the extended runway and on East Patrick Street at the far right in the photo.

This aerial photo taken in October shows Frederick Municipal Airport with the runway to be extended at the left.

Frederick Municipal Airport will receive about $4 million in grants to extend the runway at the left in this photo. Part of the money will be used to remove buildings near the extended runway and on East Patrick Street at the far right in the photo.

Federal funds will clear the way for a longer runway at Frederick Municipal Airport.

The airport will receive around $4 million in federal grants to remove several buildings on Bailes Lane and the old Waffle House. The structures need to be removed because they stand in the runway safety zone, which will be extended when the city lengthens runway 5-23 from 5,280 feet to 6,000 feet.

“We’re delighted that the FAA has put aside these grant funds for the project,” said Richard Griffin, the city of Frederick’s director of economic development. “All of these are key pieces to allowing the airport to begin to function at its best potential.”

The longer runway, he said, will allow pilots to take off with a full tank of fuel, cargo and passengers. That should help fuel sales, he added, and encourage corporate flights, which could spur development near the airport.

Mikulski is chairwoman of the Senate Appropriations Committee, which funds the Department of Transportation.

“Our regional airports play a key role in maintaining Maryland’s robust economy,” she said in a statement. “These funds in the federal checkbook mean improvements to the Frederick Municipal Airport runway infrastructure that are critical to keeping Western Maryland’s economy moving and Marylanders on the go.”

Airport manager Rick Johnson said the bids Frederick has received were a bit lower than the grant amount announced by lawmakers, so the final grant amount should come to less.

“That grant number will decrease,” he said. “We’ve been talking with the FAA ... and are now finalizing all these numbers at this time.”

He should have a final version of the grant in the fall to present to the mayor and aldermen for their approval.

Johnson said he did not anticipate any road closings associated with the demolition, but trucks may be hauling debris around the airport by winter.

“It’s great news,” he said. “It means we can finally start knocking down buildings, these eyesores that have been out here for years.”

Frederick Mayor Randy McClement said the funding came earlier than expected. Frederick was supposed to get the money in $2 million chunks over the next few years, he said, hoping the schedule might allow the city to move part of the project forward faster than anticipated.

“I think it’s great. Always, whenever we get money for projects, that’s great,” he said in a phone message.

Which end of the runway will be lengthened - the end towards I-70 or Clustered Spires?

Still not long enough for AF1 and the ego of President Trump.

Why are tax dollars subsidizing an expensive hobby? What commercial flights fly out of Frederick Airport?

its just a rich mans playground

a waste of tax dollars

Yes if you have a private plane with a pilot with a commercial pilots license.