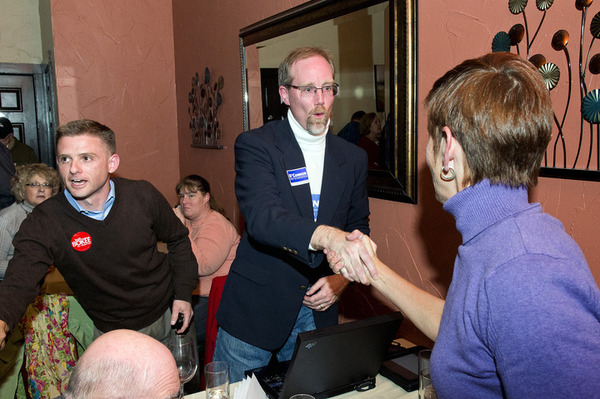 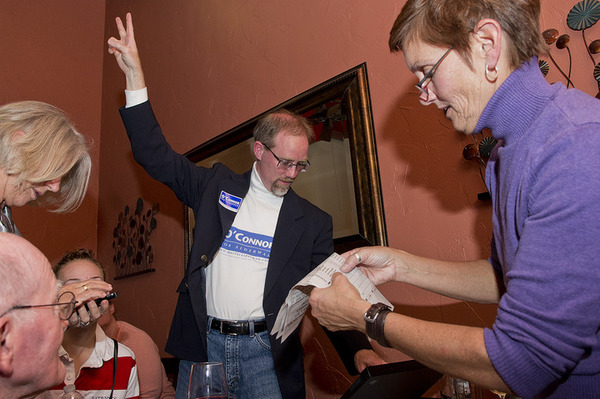 Alderman Michael O’Connor, left, and Alderwoman Kelly Russell call out early election numbers from Evangelical Lutheran Church on Tuesday at JoJo’s Restaurant & Tap House in Frederick. Russell and O’Connor got the most votes in the aldermanic race, garnering 4,212 and 4,169 votes, respectively, according to unofficial results.

Alderman Michael O’Connor, left, and Alderwoman Kelly Russell call out early election numbers from Evangelical Lutheran Church on Tuesday at JoJo’s Restaurant & Tap House in Frederick. Russell and O’Connor got the most votes in the aldermanic race, garnering 4,212 and 4,169 votes, respectively, according to unofficial results.

Four Democrats and one Republican led the field in Tuesday’s contest to become the next five aldermen in the city of Frederick, according to unofficial election numbers.

With all 12 polling precincts reporting, the top contenders included two incumbents, one former alderwoman, an attorney and a director of government affairs. However, with hundreds of ballots yet to be counted, the highest five vote-getters didn’t have large enough leads to put them out of reach of other contenders.

If Tuesday night’s standings hold, the partisan balance on the city board will remain unchanged when the next batch of aldermen take office Dec. 12.

As the results rolled in, Russell and O’Connor hunched over a table at JoJo’s Restaurant and Tap House on East Patrick Street and worked together to add them up. After announcing the totals to supporters, they turned to each other, smiled and shook hands.

The two Democrats have served together on the Frederick board for the past four years, and O’Connor said he believes Tuesday’s outcome shows voter approval of their work. Russell also said she looks forward to another four years on the city board.

Though Russell and O’Connor were poised to reclaim their seats, the remaining three spots on the Board of Aldermen will change hands this year, since the incumbents decided not to run for re-election.

One of the new faces on the board could be Dacey, a lawyer who is positioned to be the board’s only Republican.

“I don’t think party is important,” said Dacey, who celebrated Tuesday night with family and friends at his parents’ house. “I think we can have a good, productive relationship regardless.”

Bokee, a director of government affairs in the private sector, also said he looks forward to collaborating with other elected city officials.

“Everyone who won, I’ll be pleased to work with,” said Bokee, who also spent election night at JoJo’s. “Everyone brings a lot of different ideas to the table.”

Tuesday night’s standings would mean a return to the board for Kuzemchak, who served three terms as an alderwoman.

“I’m very excited to serve again. I love this city, and I love the people,” Kuzemchak said.

The preliminary numbers put Katie Nash, John Daniels, Alan Imhoff, Dave Schmidt and Daniel Cowell without enough votes to win a spot on the board. Nash, a Republican, garnered 3,492 votes, while Daniels, a Democrat, gathered 3,395, the unofficial results showed. The tally had Republicans Imhoff, Schmidt and Cowell finishing last with 2,938, 2,617 and 2,469 votes each.

After the election results were announced at JoJo’s, Daniels said he knew it would be a challenge to win the fifth spot on the Board of Aldermen.

“The numbers are what they are,” he said.

“Obviously, we were hoping for a stronger result, and I offer congratulations and best wishes to those who won,” Nash said in a telephone interview after the election.

There were 7,648 ballots cast Tuesday, and almost 35,500 voters eligible to participate in the city’s general election. Tuesday’s voting results are unofficial and do not factor in absentee ballots, which will be counted Thursday. As of 2 p.m. Monday, the city had handed out 834 absentee ballots. Of those, 399 had been returned by that time Monday, according to Stuart Harvey, Frederick County’s election director.

The distance between Kuzemchak and Nash was 164 votes.

Dacey was the top fundraiser by far in the aldermanic race, collecting more than $21,500 through Oct. 25, according to campaign finance reports. He was followed by Daniels, who gathered about $14,111 for his Democratic bid during the same period.

For complete coverage of the 2013 Frederick city general elections, including articles, videos and a precinct map, check out our election page at fredericknewspost.com/news/topics/election2013.

Absoulutly congrats. The message seems pretty clear on this one.

Congrats to the top four finishers - a good group. As to number 5 - May God help us, we are going to need it..

Maybe Nash will come up to 5th place after the 839 absentee ballots are counted.

The is a big plus I forgot to mention. Shelly Alkaloid is GONE and will soon be forgotten.