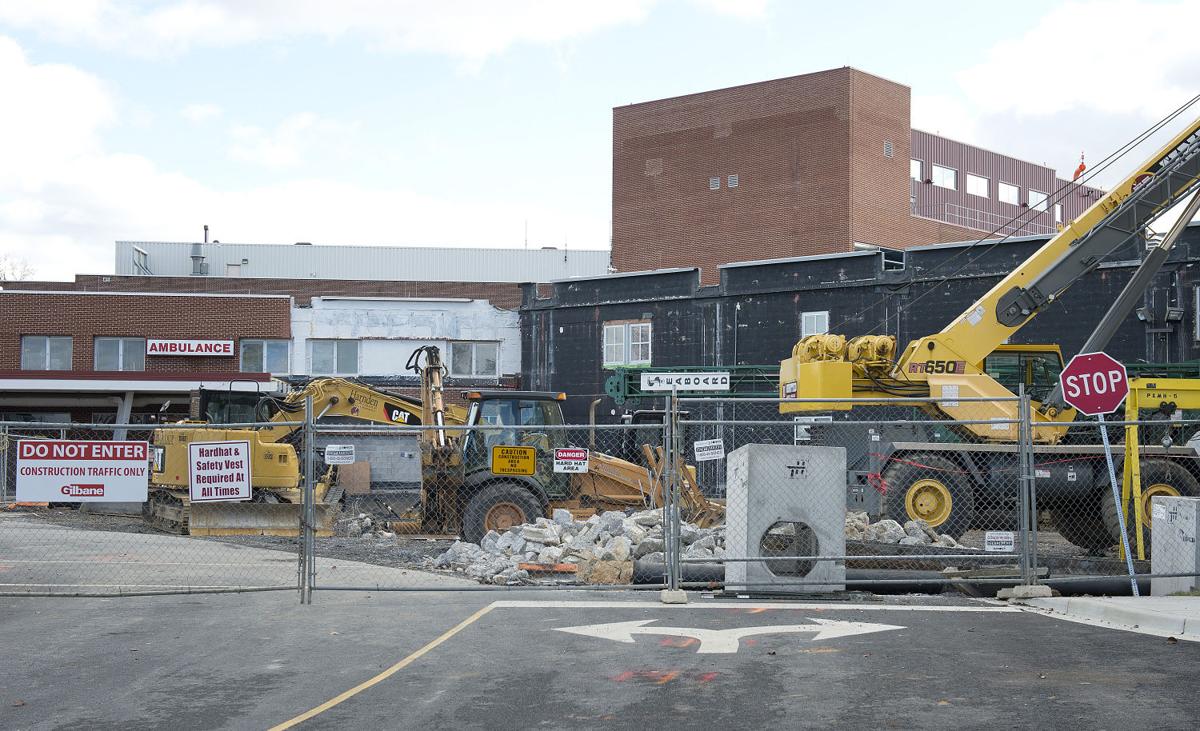 Human bones from an old burial ground were unearthed in November at a construction site at Frederick Memorial Hospital.

Human bones from an old burial ground were unearthed in November at a construction site at Frederick Memorial Hospital.

Glancing at the long list of people thought to have been buried at Greenmount Cemetery, Kay Gant at once found her family's surname, that of her husband and several longtime friends.

"These are families of people here in Frederick," she said.

Gant was dismayed at how many names she recognized of the more than 950 people that local historian David Wallace has recorded were buried at the cemetery, which operated from the 1880s to 1920s south of West Seventh Street, where the entrance to Frederick Memorial Hospital is today.

While the graves were thought to have all been moved from the site in the 1920s to Fairview Cemetery, the hospital has now twice unearthed human remains.

Gant and David Key, leaders of the African American Resources, Cultural Heritage Society of Frederick County, want to ensure that the remains found last month are treated with respect.

The group has requested a meeting with the hospital representatives, Key said, to make sure a memorial service is planned.

The hospital will work with the community to hold a service as soon as it is able to do so, said Melissa Lambdin, marketing and communications director for FMH. The hospital is finishing excavation work on the site before reinterring the bones at Fairview Cemetery, as it did last time.

Still, some people are saying the hospital should have done more in the past to prevent this from happening again and should be doing more now.

The hospital should do a full archaeological review of the site, using radar technology to search the ground for remains, said Rick Smith, a professor at McDaniel College.

Smith leads an organization that has done a similar search of an old grave site in Virginia, as well as frederickroots.com, a research group dedicated to documenting black history in Frederick County.

There is ground-penetrating radar that can find unmarked graves, Smith said. "It is not cheap, but frankly, that is what they should be doing now."

Cemeteries are a sacred space, he said.

"We owe a debt to those who came before us, and part of that debt certainly is to treat their remains with respect."

The city of Frederick hired a contractor to complete an archaeological review of the site in 2011, per city code, when the hospital was expanding its parking deck.

The contractor stated in a report that a full archaeological investigation was not recommended since the site was already so heavily graded.

"The probability of the presence of prehistoric or historic period archaeological sites located within the subject property is almost nil," the report read.

Radar technology would not work in this instance, he said, where just a few scattered bones remain.

He said the excavating should be monitored, but there is no reason to stop.

"When people bury their families, they expect that they are going to rest in peace," Key said. "It seems people are treating this in a very casual way. These are people who were buried there by family members."

They questioned whether the hospital had attempted to contact descendants in 2001.

Jim Kluttz, former president and CEO of the hospital, said that if he remembers right, the hospital contacted William O. Lee at the time. Lee, a leader in the black community and a former board member of the hospital, has since died.

"We reached out to him to get his input as to where we should reinter the bodies," he said.

Larry Moore, a local historian, said he doesn't think there is much more to be done this time around.

"I think the damage has already been done," he said.

Moore believes the hospital should have done an archaeological review of the site back when it first expanded, but there is no use in doing one now.

"People at that time should have figured all the bodies weren't moved," he said. "I'm not blaming people now. Everyone in charge now did the right thing."

Gant said she plans to meet with Bernard Brown, president and superintendent of the board of directors of Fairview Cemetery, to try to find descendants of those buried at the cemetery.

Daniel M. Hurd was buried there, and Hurd is her grandmother's name; there are also eight different Palms, and Palm is her maiden name, as well as Gertrude Gant, wife of Fred Gant, and Fred Gant was her husband's great-grandfather. Other names include Onley, Roberts, Rollins and Saunders, and the list of familiar black families goes on.

Smith hopes black cemeteries in the county will receive more respect in the future.

"At best, the way they have been treated is a tragedy, and at worst, a travesty," he said. "Hopefully, we will rectify that, one cemetery at a time, by finding it and documenting it."

The hundreds of people who were buried in Greenmount Cemetery in the late 1800s and early 1900s were most likely black servants, according to local historians.

The Working Men's Association of Frederick County bought 4 acres on the south side of Spout Spring Turnpike, now Seventh Street, on Sept. 9, 1880, from the Banty family for the purpose of creating a burial ground, according to Frederick County land records.

The association sold the land, just east of the Hood College campus and just west of Frederick City Hospital (now Frederick Memorial Hospital), to the Working Men's Stock Co. in 1898.

The stock company, thought to be just a new installment of the association, was established in 1898 to provide care for the corporation's members, taking care of the members when sick and buying and improving land to be used to bury the members and members' families, according to its articles of corporation, which were also filed in the Lee collection at the historical society, Currens said.

Obituaries published in The News show that people were buried in the cemetery from 1884 to 1928. Local historian David W. Wallace has pored through archives from several newspapers to create his database of black cemeteries, which includes about 970 names at Greenmount.

Of those names, more than 200 were children, and dozens of those were infants.

This shows just how little access black people had to hospitals at the time, said Kay Gant, vice president of the African American Resources, Cultural Heritage Society of Frederick.

One was the Laboring Sons Cemetery, which is memorialized between Fifth and Sixth streets, and one was a cemetery on a church property on All Saints Street, called Hill Church or Hillside Church, Moore said.

Whether those graves, when reinterred, had tombstones or markers, Moore said he wasn't sure.

Should Frederick Memorial Hospital provide a proper burial for human bones found at a construction site atop a former cemetery?