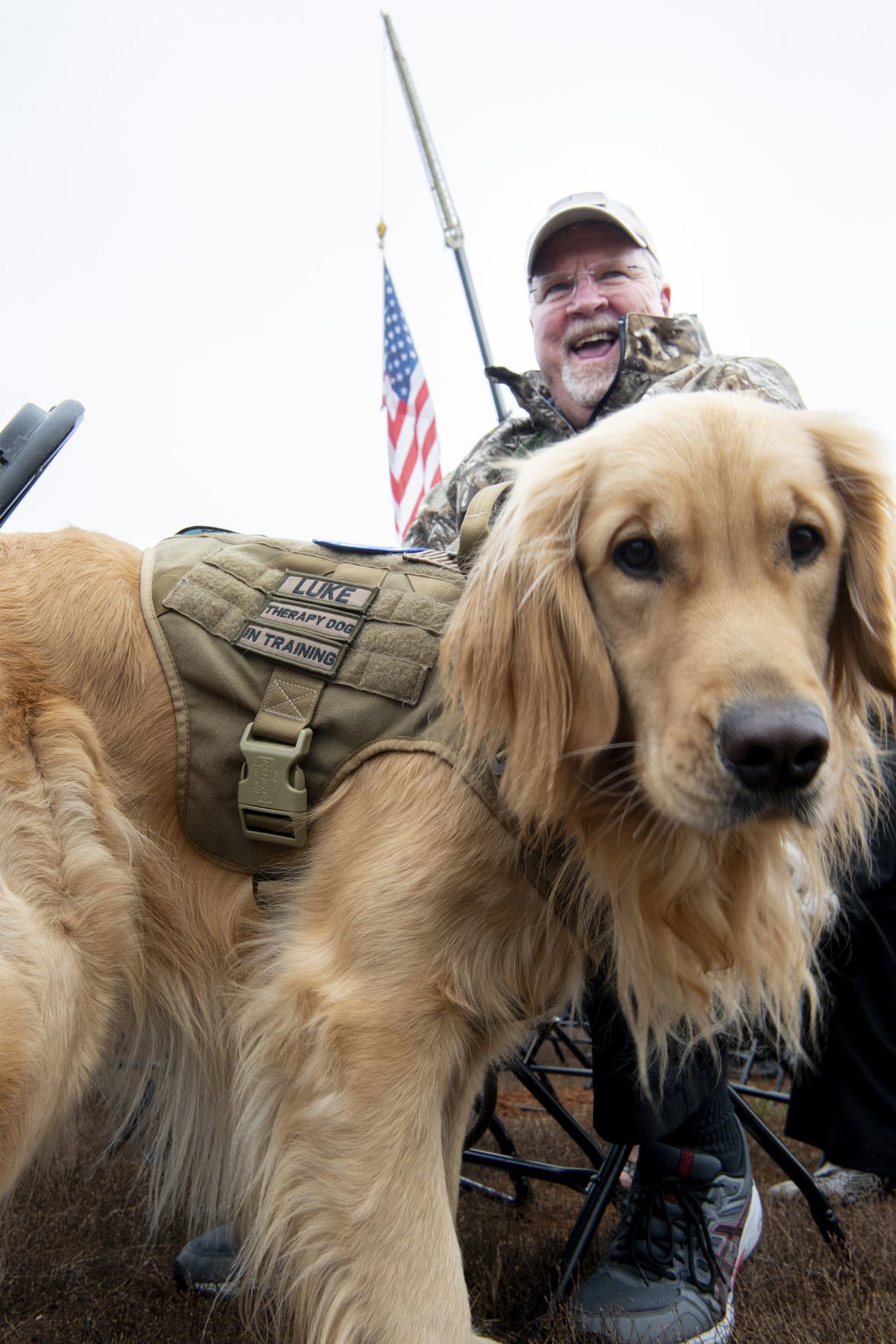 Paul Kelly and his therapy dog, Luke, attend the groundbreaking of a new veterans center that is a collaboration between Goodwill Industries of Monocacy Valley and Platoon 22, a Frederick nonprofit that seeks to help veterans. Kelly, an Army Reserve veteran, takes the dogs to visit veterans throughout the county. 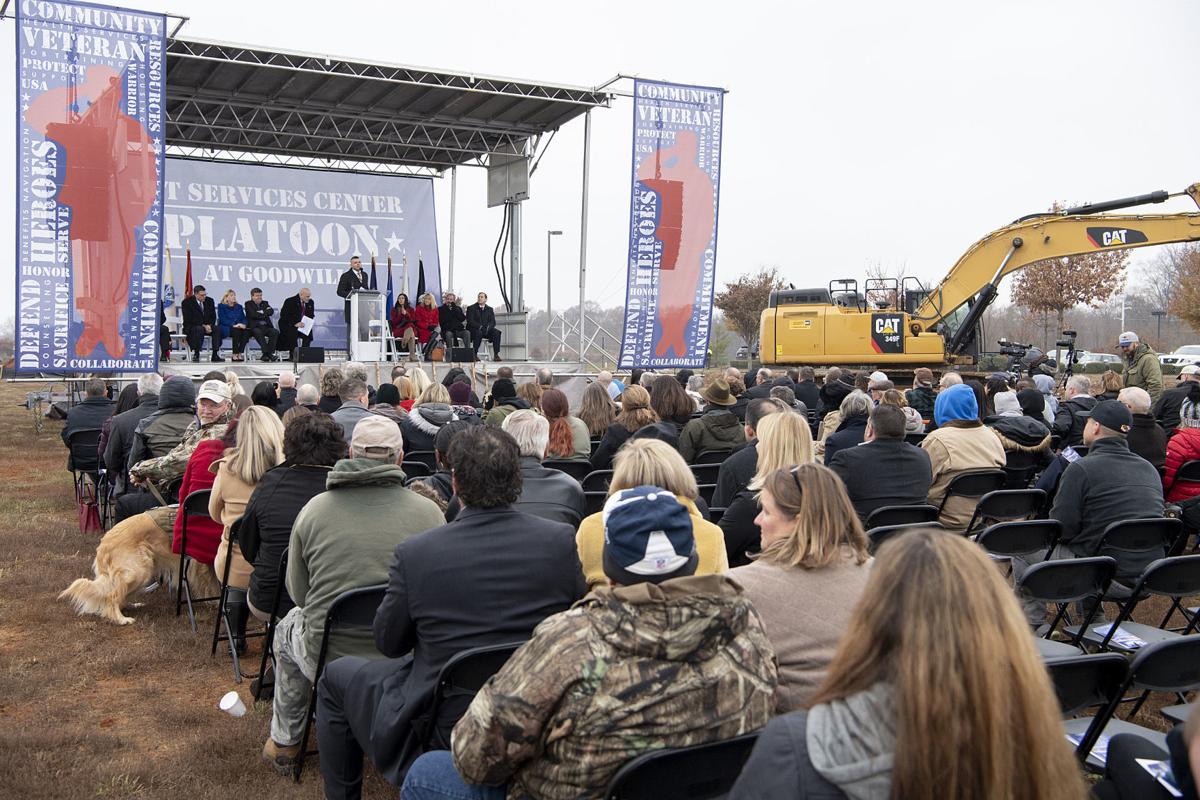 The groundbreaking of a new veterans center that is a collaboration between Goodwill Industries of Monocacy Valley and Platoon 22, a Frederick nonprofit that seeks to help veterans.

Paul Kelly and his therapy dog, Luke, attend the groundbreaking of a new veterans center that is a collaboration between Goodwill Industries of Monocacy Valley and Platoon 22, a Frederick nonprofit that seeks to help veterans. Kelly, an Army Reserve veteran, takes the dogs to visit veterans throughout the county.

The groundbreaking of a new veterans center that is a collaboration between Goodwill Industries of Monocacy Valley and Platoon 22, a Frederick nonprofit that seeks to help veterans.

Jon Harmon is less than a year out of the Army, in the midst of a transition back into civilian life that military veterans have gone through as long as there has been war.

Harmon, of Damascus, is working on an undergraduate degree in nutrition science, working toward eventually getting his doctorate.

His two prosthetic legs, a result of stepping on a roadside bomb as a member of the 82nd Airborne in Afghanistan in 2012, are constant reminders of his eight years of service.

On Monday, Harmon attended a groundbreaking ceremony for a veterans service center in Frederick, a collaboration between Goodwill Industries of Monocacy Valley and the veterans nonprofit Platoon 22. The center will offer services to help veterans transition back into civilian society, including help with benefits paperwork, mental and physical health assistance, and vocational training.

The 20,000-square-foot site will seek to help veterans avoid the common problems of homelessness, incarceration, suicide, and other problems that can often afflict people returning from deployments overseas. An estimated 22 American veterans die by suicide each day, according to the National Institutes of Health.

Harmon said the center will help he and other vets avoid having to travel to faraway Veterans Affairs sites for help with their benefits paperwork and filing claims.

He goes to Walter Reed National Military Medical Center in Washington, D.C., to get work done on his prosthetics. But he said having the wide variety of services available at the new Frederick center will be a help to him and other local veterans.

The site will be a “complete game-changer” for Frederick County and for offering services to veterans, said County Council Vice President Michael Blue at a groundbreaking ceremony Monday.

The area needs a centralized place for veterans to come for the services they need, and the new center will be it, he said.

Organizers hope the site will be completed in a year to open on Veterans Day 2020, said Michael Meyer, president and CEO of Goodwill Industries of Monocacy Valley.

While Monday's ceremony was the first step in a long journey, his experience serving in the Marine Corps makes the project personal for him.

Platoon 22 founder Danny Farrar said Monday marked a big moment, in showing that the project is actually moving toward getting done.

They intend for the center to serve Maryland and surrounding states, and ultimately hope to make it into a model that they can spread around the country, Farrar said.

Maryland Secretary of Veterans Affairs George Owings said he hopes that the Frederick site can be a model for others around the state.

It's everyone's duty to make sure that veterans have access to the resources they need, County Executive Jan Gardner said.

State Sen. Ron Young said he was impressed when Farrar and Meyer showed him what they wanted to do.

A lot of people point out needs and complain about what needs to be done, but Farrar and Meyer pointed out needs and did something, Young said.

The center will get a “sizable” contribution from the state, Young said, although he didn't want to reveal a number until the legislation is finalized.

FCPS Principal-whoever you are this post is totally inappropriate for an county administration employee. Make these comments on your own name and not through FCPS. I am reporting this. You should not be involved with our youth.

Where is it located?

Over by where Soldierfit is, off Monocacy Blvd near the bridge that may never get complete