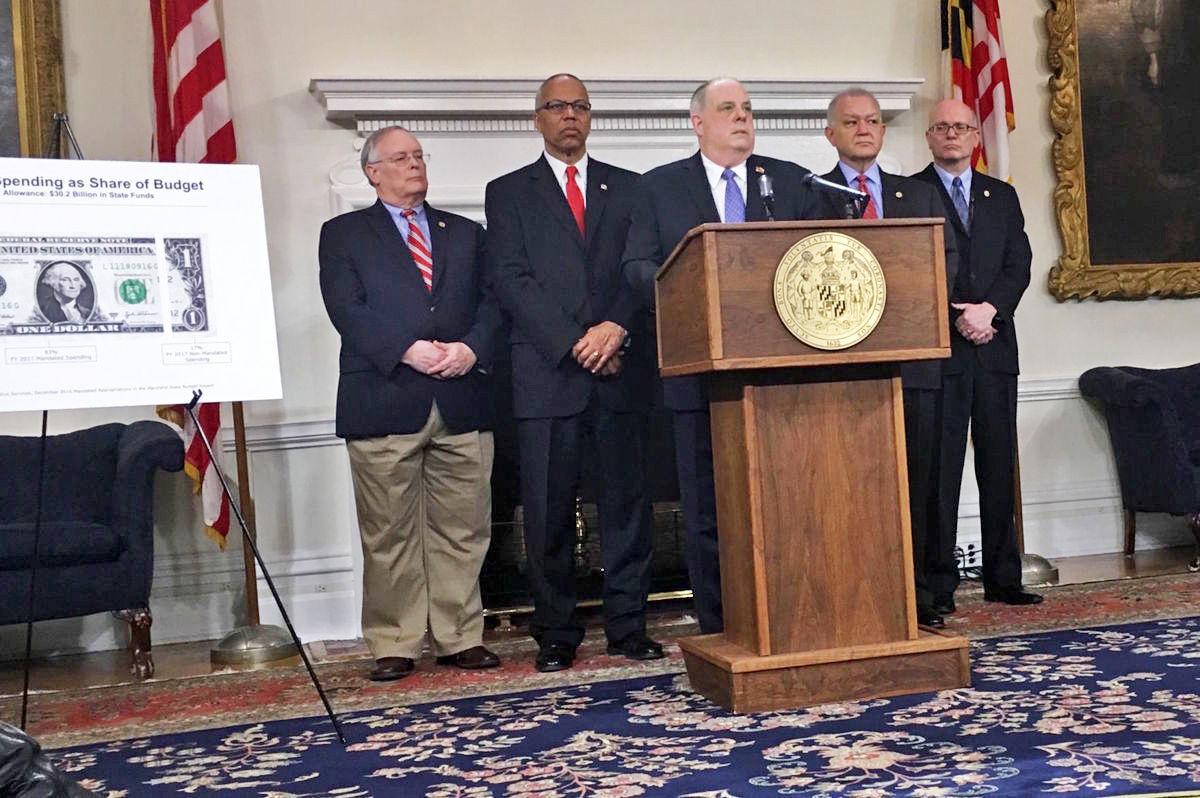 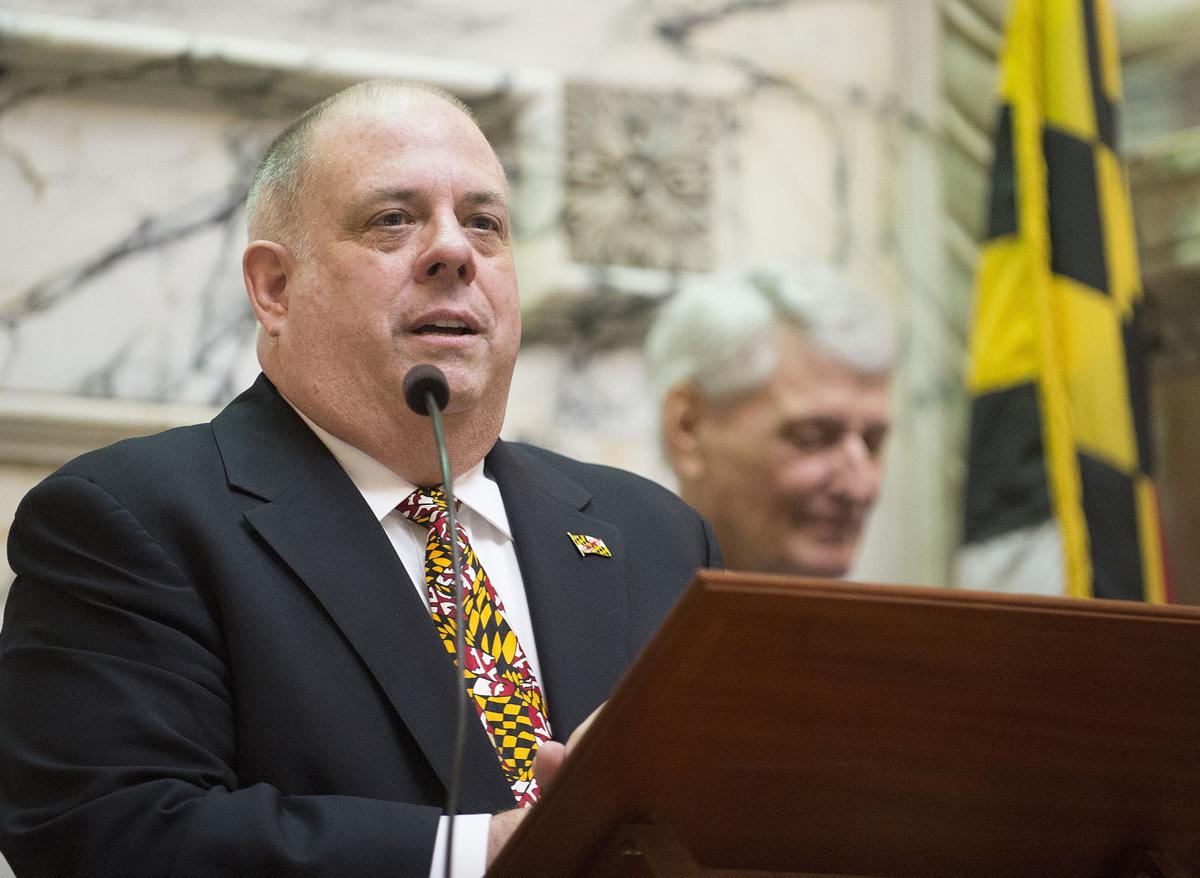 Gov. Larry Hogan speaks in the House chamber in the State House in January. At right is Speaker Michael E. Busch.

Gov. Larry Hogan speaks in the House chamber in the State House in January. At right is Speaker Michael E. Busch.

ANNAPOLIS — Gov. Larry Hogan’s budget won’t include funding for a downtown Frederick hotel and conference center project when it is unveiled on Wednesday — but that doesn’t mean the project won’t be funded within the next 12 weeks.

Maryland Budget Secretary David Brinkley, a former state senator from Frederick County, confirmed that the money won’t be included in the governor’s proposed budget, though he expects that lawmakers will add it later.

Brinkley spoke just outside Hogan’s press conference on Tuesday morning after the governor gave a broad overview of what can be expected when the multi-volume budget books are released Wednesday.

In the press conference, Hogan touted spending for city revitalization projects elsewhere in the state — Baltimore, Cumberland, Hagerstown and Salisbury — but did not mention Frederick.

Brinkley said the project wasn’t included because the governor’s concern was to keep capital budget spending below $995 million for the foreseeable future and “stop the hemorrhaging.”

On Wednesday, Hogan said payments on the state’s previous debt are the fastest-growing line item in the budget.

“Basically, after years of running up the credit cards, the result is devastating,” Hogan said. “Next year, the state will be forced to spend more on debt service payments than we will be able to spend on school construction, which is completely unacceptable.”

Last year’s capital budget was approved by lawmakers with $995 million in expenditures.

However, that spending fell further to about $17.1 billion after the Board of Revenue Estimates approved $82 million in cuts to the current year budget in November.

The fiscal 2018 budget will include $17.1 billion in spending, the governor’s office announced Tuesday.

The state’s overall budget — when federal money and other special funds are included — is more than $40 billion.

In Maryland, the governor largely shapes the state budget. The General Assembly generally can only cut the governor’s operating budget and cannot increase or rearrange spending categories.

The House and Senate take turns each year reviewing the governor’s budget proposal first. The House of Delegates is considering the spending proposals first this year.

Delegate Kathy Afzali, R-District 4, the chairwoman of the Frederick County delegation, said she was pleased to hear from a News-Post reporter that the conference center project was not funded.

“How many ways can you say it’s dead?” Afzali said of the project. “I’m hoping we’re going to move on. There’s some other budget shortfalls this year and there’s very important things to fund such as education and pension funds. So let’s not take our resources for one developer. Let’s focus on all of Maryland.”

She said Republicans in the delegation — who voted as a bloc against a conference center funding bill last year — don’t oppose the project entirely.

“We just want it to go forward with private money,” she said.

Delegate Carol Krimm, D-District 3A, sits on the House Appropriations Committee and supports public funding for public portions of the project. She will continue to advocate for funding to be added to the coming year’s budget.

Last year, it was a budget conference committee — the negotiators appointed to reconcile the difference between the House and Senate versions of the budget — that added pre-authorizations of $7.5 million in both fiscal years 2018 and 2019 for the project.

The proposed hotel and conference center property at 200 and 212 E. Patrick St. is owned by a business entity formed by members of the Randall family. The Randall family also owns the parent company of The Frederick News-Post.

Complete numbers to be released Wednesday

While the full rundown of proposed state spending won’t be released until Wednesday, the governor discussed some of his priorities for funding on Tuesday.

The fiscal 2018 operating budget totals $17.1 billion, including a $6.4 billion investment in K-12 education. The budget also funds higher education to cap tuition increases at public universities and colleges at 2 percent and gives a record $256 million in funding to community colleges, about $4 million over the state’s funding formula.

“There are no serious cuts. Almost every service and everything that was in last year’s budget is increased or level funded,” Hogan said.

Senate President Thomas V. Mike Miller Jr. told reporters after a floor session on Tuesday that the budget does not include pay increases for state employees in fiscal 2018.

Maryland has a projected budget shortfall of about $544 million for the next fiscal year. Hogan was able to avoid more budget pain by using money in the state’s Rainy Day Fund, which now holds more than the targeted 5 percent of the state’s operating budget.

The Common Sense Spending Act of 2017 would allow new spending mandates passed by the General Assembly only if a previous mandate is reduced or repealed for the same fiscal year, among other reforms.

The Fiscal Responsibility Act of 2017 would automatically divert excess state income during years with a revenue surplus to the Rainy Day Fund to make that excess revenue available for use in years when revenue is less than projected. It will also end the practice of using occasional temporary revenue spikes to fund known recurring future expenses.

The General Assembly must pass a budget bill by the 83rd day of its 90-day session, April 3.

The Associated Press contributed to this report.

On the same day that the The Frederick News-Post’s political reporter found out Gov. Larry Hogan did not include funding for Frederick’s downt…

Maryland Historical Trust has determined the Birely Tannery property to be unique and significant, as the last remaining tannery in Frederick and says it will continue to be eligible for the National Register and disagrees with the Plamondon's paid archaeologist's opinions about the site. Another blow to the badly managed project.

Frederick could've gotten a casino/hotel and millions of dollars for our schools and law enforcement but he locals were afraid of a Trump style economy.

So now this is Trump's fault? Jeeze.

He didn't make sense, did he, bosco? Most of his comments don't.

You got that right, DickD. Soon, everything will be Trump's fault just like it's been Obama's fault for the last eight years. [beam]

They keep basting this turkey, but the oven is not on.

Unreported so far here is the great news that this disgraceful boondoggle has now been given the thumbs down by a third state agency, the Department of Housing and Community Development. With great fanfare the City went for $1 million in August last. $0.00 granted for FY17!!! see it reported: www.frederickhotelboondoggle.us

“How many ways can you say it’s dead?” Afzali said of the project. “I’m hoping we’re going to move on. There’s some other budget shortfalls this year and there’s very important things to fund such as education and pension funds. So let’s not take our resources for one developer. Let’s focus on all of Maryland.” This says it all, thank you, Kathy.

What does it mean when a local lawmaker says that it will be "added later "? Where is that money coming from?
Why are the local hotel/conference center cheerleaders pretending that this project is moving ahead with speed?
I hope that the plamondons are looking for 100% private financing. The taxpayers have more important things to fund for the good of most.

Excellent news and lets keep it that way; why should the taxpayers help fund a project to enrich the Plamondons and Randalls...if the project can't stand on its own 2 feet it should NOT be built...too many feeding at the public trough

Time to move on Carol Krimm.

To those saying "Frederick residents doesn't want it", speak for yourself and stop trying desperately to speak for everyone.

Downtown hotel/conference center is OK, just build it with private money. Don't expect the taxpayers to furnish the money.

If that's happening they need a grammar refresher...

The residents of Frederick do not want a downtown hotel and all of the mayhem that would cause. That project would reverse course from the path our city's culture has taken. Overall a terrible idea.

what mayhem? Most cities have a hotel downtown now, and no mayhem.

I think a hotel downtown would be great - I just don't want my taxes funding it.

This budget still requires the governor to dip into the rainy day fund because the state continues to spend money it doesn't have.

Thank you Gov Hogan! Thank You!

To The City Of Frederick: You want this hotel / conference center so bad??? Then put out a national advertisement announcing that you're looking for a private investor. Kick the Plamandoon's to the curb, they can't afford this. Find someone that can.

The state has no business funding a hotel/conference center to enrich the Randall$ and the Plamondon$. If the hotel/conference center were a viable business plan, it would already have been built and the city and county would already be collecting taxes on the property. The fact that the parties involved want the taxpayers to fund it speaks volumes about what a good business idea it is. The business of government is not business.