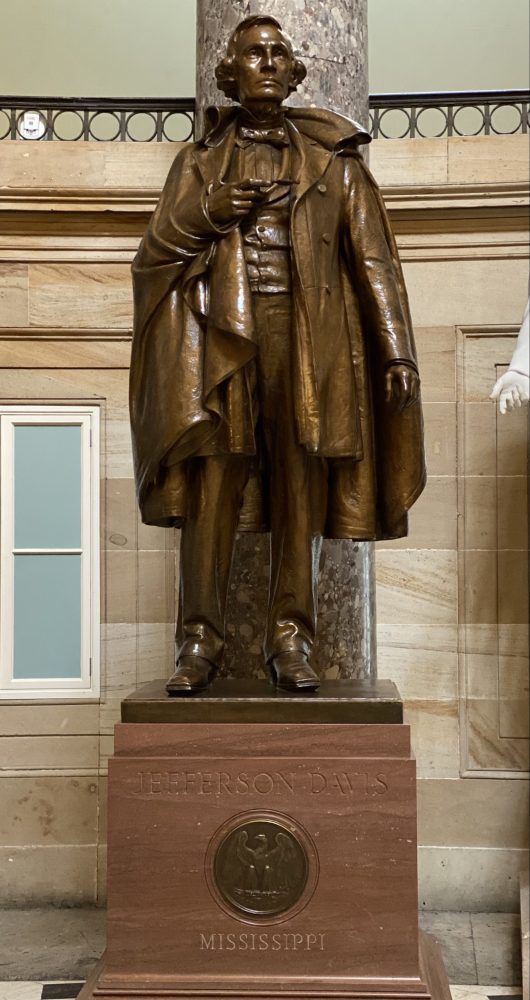 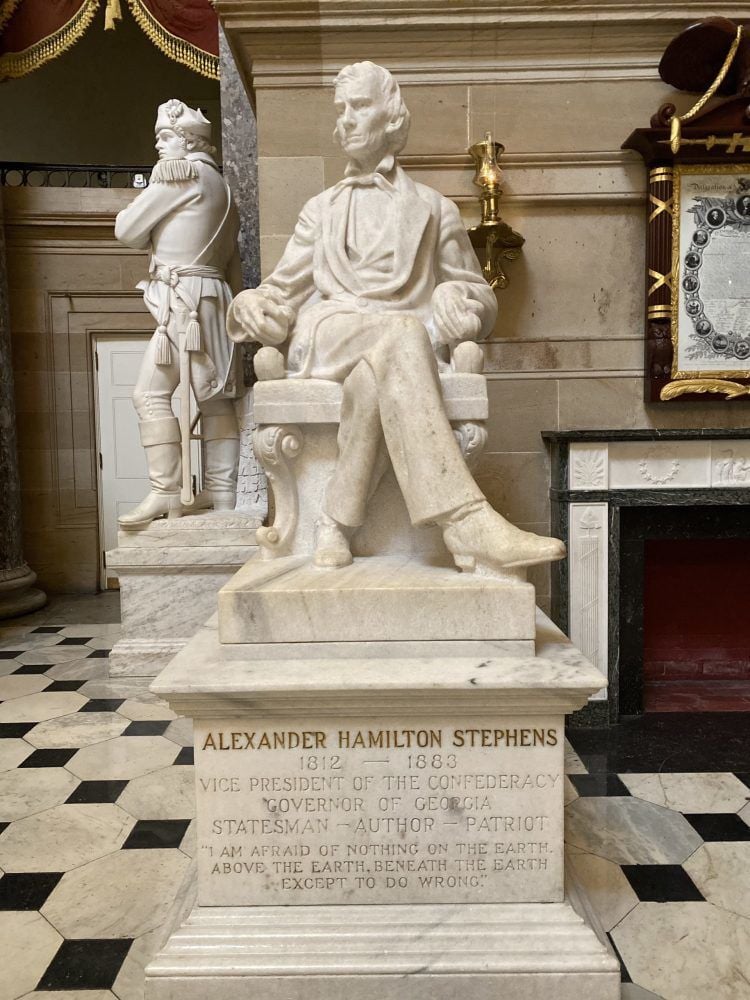 A statue of Confederate Vice President Alexander H. Stephens of Georgia, one of a number of statutes in the United States Capitol Building of Confederates and white supremacists that Democrats are seeking to have removed.

A statue of Confederate Vice President Alexander H. Stephens of Georgia, one of a number of statutes in the United States Capitol Building of Confederates and white supremacists that Democrats are seeking to have removed.

WASHINGTON — Standing in National Statuary Hall in the United States Capitol Building, visitors are taken on a journey through 250 years of American history. While some of the room’s figures, like Rosa Parks and Thomas Edison, exemplify the nation’s diverse and exemplary history, others representing a darker side of the past remain.

Statues of Confederates and white supremacists in the hall and elsewhere in the Capitol have not surrendered to widespread public pressure to remove them — even after the House passed legislation in June to do so.

House Majority Leader Steny Hoyer (D) from Maryland is leading a group of Democrats – including Maryland’s Democratic House members — to renew efforts to get the Senate to follow the House.

“The names and faces of those who championed slavery, sedition, and segregation have no place in this temple of American freedom and democracy,” Hoyer and the other Democrats said in a Sept. 24 letter to Senate Majority Leader Chuck Schumer (D-New York). “These sacred spaces should be reserved for those we revere: honorable Americans of whose deeds and legacies we can all be proud.”

Hoyer and 17 other Democrats sponsored the legislation passed by the House to remove the bust of Chief Justice Roger Brooke Taney from the Capitol and replace it with a bust of Associate Justice Thurgood Marshall. The measure also targets 13 other Confederate politicians and soldiers as well as white supremacists.

Taney, a Maryland native and former slave owner, wrote the majority opinion in Dred Scott v. Sandford in 1857, contending that blacks, whether they were enslaved or free, could not sue in a court because they were not American citizens; he also said Congress couldn’t free slaves in U.S. territories.

“The Dred Scott decision was a blot on our history and represents the tragic legacy of slavery and racism that should not be celebrated in our country,” Hoyer said in a statement. “In my home state of Maryland, a statue of Chief Justice Taney was removed from the grounds of the State House, and it’s past time that we follow suit in the U.S. Capitol.”

Each state is allowed two statues in the Capitol to honor people who have made a significant impact in that state’s and nation’s history.

But among the figures immortalized in Statuary Hall is Confederate President Jefferson Davis of Mississippi. His vice president, Alexander Hamilton Stephens of Georgia, is standing nearby.

A bust of Taney stands in the Capitol’s Old Senate Chamber, later used by the Supreme Court until 1935.

Not only do these statues symbolize divisive times in U.S. history, but also they stand as barriers to healing racial and political divisions, lawmakers said.

“On January 6th, we experienced the divisiveness of Confederate battle flags being flown inside the U.S. Capitol,” House Majority Whip James Clyburn (D-South Carolina) said in a statement. “Yet there are still vestiges that remain in this sacred building that glorify people and a movement that embraced that flag and sought to divide and destroy our great country.”

Removing the objectionable statues will “demonstrate that as Americans we do not celebrate those who seek to divide us,” Clyburn said.

Hoyer’s bill is part of a host of efforts around the nation, especially in the South, to remove the statues of Confederate and segregationist figures in state capitals and other public spaces.

The decision to remove the Taney statue from the Maryland State House “reflects our growth as a state as we have confronted the most difficult parts of our history,” Hoyer said.

The Maryland congressman won House passage of his statue bill in July 2020, but it was never considered by the Senate, then controlled by the Republicans.

This time around in the House, 218 Democrats and 67 Republicans voted in favor of the bill, while 120 GOP lawmakers voted against it.

“The House has now advanced our legislation twice,” Hoyer wrote to Schumer. “We would hope that the Senate would now move this legislation. Every moment we delay is a missed opportunity to correct historical wrongs.”

Schumer’s office did not respond to a request for comment.

Maybe they should get rid of Denny Hoyer instead..

Why stop with statues? There are still millions of people in America that feel exactly the same as those men and women.

However will remember these people without statues?

Nevermind. I just now remembered that we have history books

While we're at it, let's remove all statues, memorials, etc. of all presidents and other federal figures before Abraham Lincoln. They either owned slaves or by not ending slavery were partly responsible for its existence. The founding fathers were terrorists in their time, rebelling against the legitimate authority in a large part because they didn't want to pay the taxes that were incurred by the wars they started with the French and Indians. Washington basically started the F&I war which turned into a world war costing the British government a lot of money. King George III tried to stop the colonists from moving west but we'd have none of it and kept stirring the pot with the Indians as before.

“The Dred Scott decision was a blot on our history and represents the tragic legacy of slavery and racism that should not be celebrated in our country,” Hoyer said in a statement. “In my home state of Maryland, a statue of Chief Justice Taney was removed from the grounds of the State House, and it’s past time that we follow suit in the U.S. Capitol.” Yet at the time, it was a correct ruling based on the law at the time just as the SCOTUS was unfortunately correct in its Citizens United ruling.

When we know better, we do better. Why are you against that?

I'm not against knowing better and doing better (as should be evidenced by all my comments about population growth and climate change where we now know better but we haven't done better). Where do you get that idea from what I've written? Nothing I've written supports your question of why I'm against knowing better and doing better. However, it is hypocritical to remove some statues and not others based on the criteria they are using. Our history is our history, the good, bad, and often times ugly. Personally I don't like public statues in general (except maybe on battlefields to show positions) and I don't like naming public buildings, bridges, facilities, parks, etc. after people. I tend to agree with those who think much of that stuff belongs in private facilities and museums where appropriate and in proper context. I would be fine with the removal of all statues from the capitol.

Man, are you clueless.

Democrat leadership is upset & worried over statues to founding white men, however they are quite comfortable with statues to Communist mass murderer Vladimir Lenin in Seattle (<�—- a slave owning Chief), NYC, & L.A.

We need a Museum of National Shame.

What a bunch of garbage. All involved are Dims, no surprise there. They should be worried more about getting their own houses in order, like cleaning up the major cities which they have allowed to stagnant over the past umpteen decades. But, since they know that's a "Lost Cause," they deflect with nonsensical, feel-good actions like this. Disgusting.

Thank you. I figured people like you could use the help since you can't see for yourselves how they're trying to destroy this country.

Matthew - he does it all the time. Dims is the most creative name he can come up with. Between that and his profile photo, we can tell the level of maturity we're dealing with.

FYI, newspostreader, I did not "come up" with "Dims," it a term commonly used by conservatives everywhere in this country. Any idea what it represents? I'll give you three guesses, ok? Oh, and would you say that it's more, or less, creative than all the names which you people came up with for our former president? And my avatar is a sentiment reflected by many who are smart enough to see the level of damage that the idiot currently in the White House has done to this country. I use it because people like you are too blind to see it without some kind of assistance.

Yes, C.D. I am aware of its use by others and the meaning. I find it amusing that so many heard it, and then decided to use it. Sort of like sheep, don't you think? One uses it so the herd follows?

Well, newspostreader, if anyone would know about sheep, Biden's sheeple certainly would, now wouldn't they?

Don't mind CDeez. He plays the typical bully role very well. He will jump into one thread and call people names and then pop over into another one and play victim.

CDeez is the type of person to watch you pull out of your driveway, run over and hit your car with his hand and lay down next to it claiming injury.

Maybe we should raise a statue to Hitler too? Because we fought a war against him as well. Hirohito? Mussolini? They fought against us too. Or are we okay with American enemies?

Washington, Jefferson, Adams, etc. also both supported slavery and rebelled against the mother country. Wouldn't you say that they, in their own ways, were responsible for the deaths of British soldiers who were only doing their duty to their country? And do you think that all the statues of all our founding fathers should be removed because they condoned/allowed slavery? Or just the statues of the fathers who actually owned them?

If memory serves, most of the people represented by the statues were Democrats so one might say that the Dems are getting their house in order.