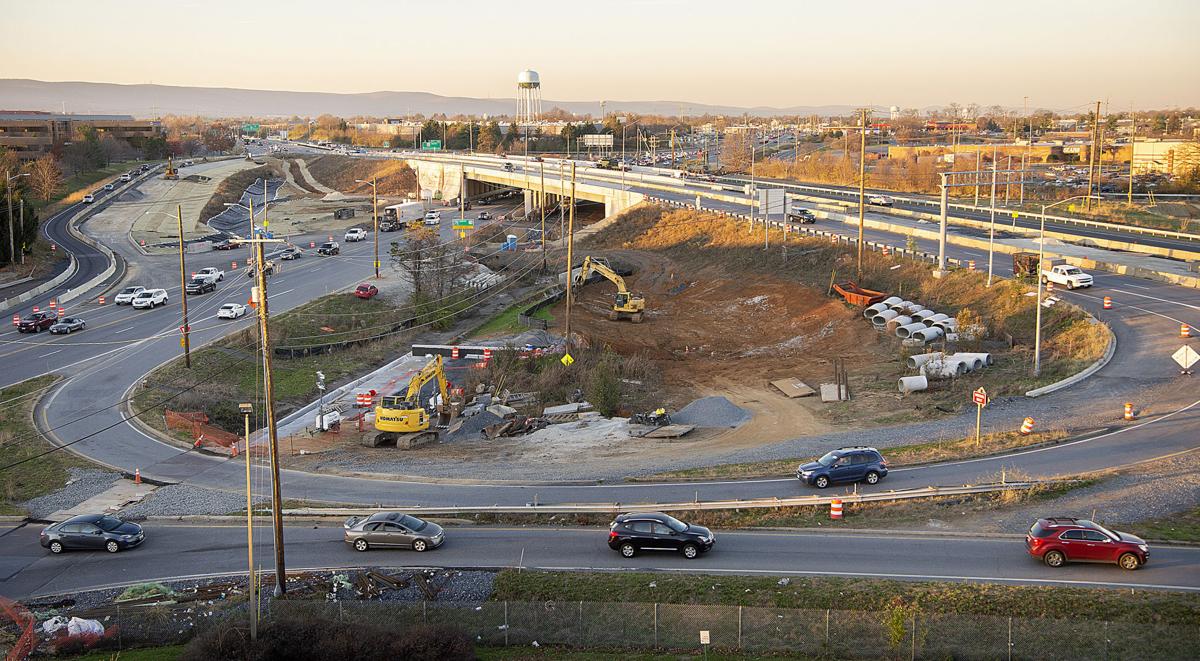 Work is currently underway on adding lanes and revamping traffic patterns on Interstate 270 at Maryland Route 85, south of Frederick. Traffic is shown traveling in that area late Friday afternoon. 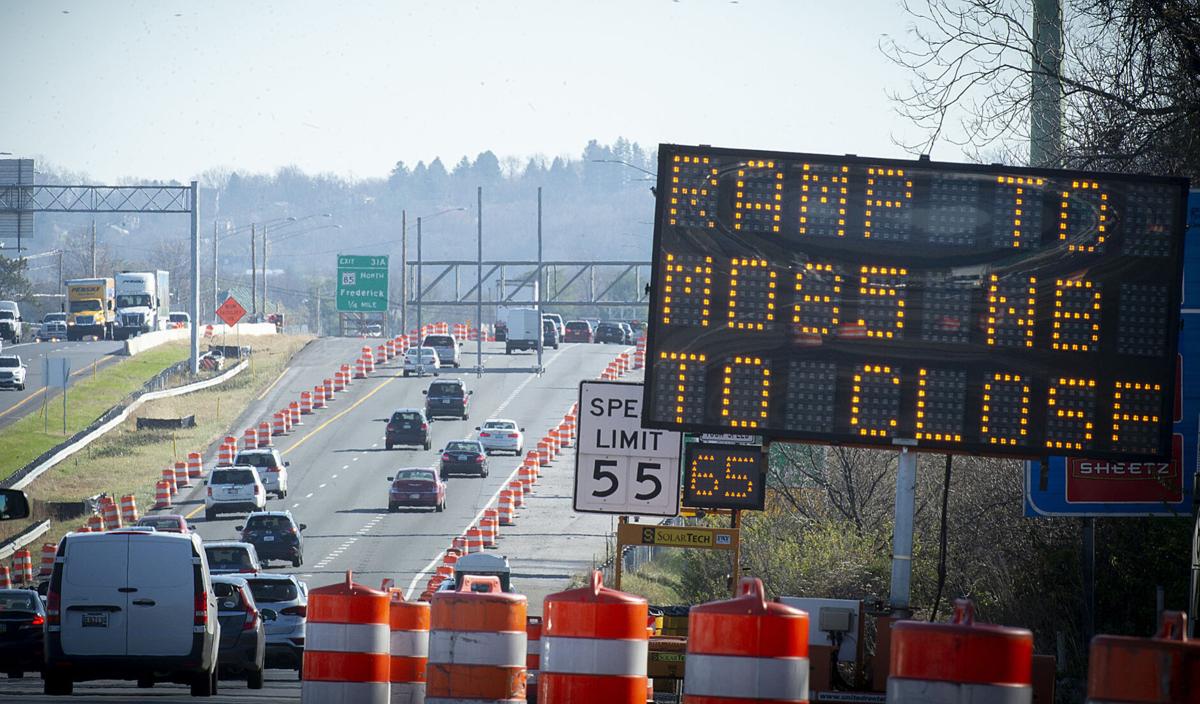 Work is currently underway on additional lanes and revamping traffic patterns on Interstate 270 at Md. 85 south of Frederick.

Work is currently underway on adding lanes and revamping traffic patterns on Interstate 270 at Maryland Route 85, south of Frederick. Traffic is shown traveling in that area late Friday afternoon.

Work is currently underway on additional lanes and revamping traffic patterns on Interstate 270 at Md. 85 south of Frederick.

In the early months of the Trump administration, Washington was awash with rumors that the two parties were hard at work on a bipartisan deal on infrastructure spending.

But as time wore on, the plans always fell victim to political gridlock and President Donald Trump’s propensity for Twitter controversies, and soon “Infrastructure Week” became a Washington punchline for the White House’s lack of message discipline.

Now, with Joe Biden poised to take office in January, infrastructure’s bipartisan appeal makes federal lawmakers hopeful that it might once again be a key issue when the new Congress takes office.

“Infrastructure investment is about the most popular, cross-partisan priority you can imagine,” said Congressman Jamie Raskin (D-Dist. 8). “That’s why I never understood why President Trump didn’t seriously push it. That was a terrible lost opportunity for the country, but it was also a lost political opportunity for him. For the life of me, I cannot understand why they didn’t advance a real package.”

Trump talked a lot about infrastructure in the 2016 presidential campaign, and his campaign released a white paper emphasizing the importance of it. Still, throughout his term, the president was never able to advance a focused infrastructure package through Congress.

Biden’s campaign website includes a section on infrastructure, with calls to expand public transit, modernize the country’s electrical grid and repair its highways, roads and bridges, among other priorities.

While legislation to provide relief for victims of the COVID-19 pandemic is expected to be the main priority when Congress returns, an infrastructure deal may not be far behind.

With the election over, Congress needs to take up the issue of COVID relief, said Congressman David Trone (D-Dist. 6).

He believes congressional Republicans have seen the reality of COVID despite Trump’s efforts to downplay it during the campaign. Trone mentioned a conversation with a Republican colleague from Texas whose district has been hit hard by the virus.

“Bipartisanship should be the buzzword of the day,” Trone said, and he thinks Biden is in position to make it happen after his decades in the Senate working with Strom Thurmond and other Republicans to get things done.

In January, Congressman Sam Graves of Missouri, the ranking Republican on the House’s Transportation and Infrastructure Committee, indicated a willingness to work with Democrats on the issue.

“With the House finally beginning to take steps toward infrastructure legislation, Committee Republicans look forward to a bipartisan process in the Transportation and Infrastructure Committee,” Graves said in a statement on the committee’s website. “I may not agree with all of the principles in the majority’s outline, but as the Republican leader of this Committee, I expect to play a constructive role in the development of infrastructure bills before us this year ... On this Committee, we know the recipe for success in addressing America’s infrastructure needs is through partnership, so let’s get to work.”

Senator Ben Cardin (D-Md.) said he senses widespread support to let infrastructure be a part of rebuilding the economy that’s been damaged by COVID-19. Substantial legislation could support construction jobs and other types of economic growth, he said.

That would be welcome news for companies like Gaithersburg’s Concrete General, which does highway and bridge construction projects throughout the state. A federal bill would be celebrated by the company and the industry in general, and the money could start to move fairly quickly, said Michael Miller, Concrete General’s vice president.

“We have projects that are shovel-ready right now,” Miller said.

Officials who have spoken with members of Biden’s policy team say infrastructure will be high on the list of priorities when the new administration takes office.

Trone said he would like to see a focus on improving broadband internet access, especially for rural parts of America, including areas of Frederick County like Thurmont and the Catoctin Mountains. A focus on bolstering rural broadband would help Frederick County Public Schools provide access for students learning from home, and it could help facilities such as Frederick Health Hospital provide telehealth services, including virtual mental health services.

The service provides some good speeds, he said, but not everywhere, and the connectivity disappears almost as soon as you leave the town limits.

“It’s one of those infrastructure projects that is as important as roads are to some people,” Kinnaird said.

A federal plan would also help with the “last mile” problem of connecting service lines to individual homes that are hard to reach.

“The commercial entities aren’t going to step up and do this,” Kinnaird said.

In line with bipartisanship, broadband is also an attractive issue for congressional Republicans who represent rural districts and see the problems their constituents have in staying economically competitive without fast internet service, Trone said.

“The more rural you are, the more you need broadband, and not having it leaves you very isolated, economically and socially,” Raskin said.

Other infrastructure projects — from improvements to bridges, funds for the Port of Baltimore and local roads projects including the revival of a Montgomery County project that could help relieve traffic on I-270, to more money for public transit — are what make this workforce spending so popular with members of both parties in Congress.

The cost of not acting will be much worse’

But that type of spending adds up quickly — Trone estimated $2 trillion as the potential cost of an infrastructure bill — and an expensive COVID relief package is expected to be Congress’ first priority in either the lame duck session of the current Congress or upon the new Congress’ arrival in January.

Senate Majority Leader Mitch McConnell (R-Kentucky) has already expressed concern about the fiscal effect of a large second COVID relief bill, and the Senate majority leader also objected to federal infrastructure spending in the wake of the Great Recession in 2009, according to a Brookings Institution report.

Raskin said Republicans forfeited their rights to claim deficit concerns when they passed a large tax cut in 2018.

“They will be in no position to block us from investing in public infrastructure and the things that the American people really need,” he said. “The cost of not acting will be much worse than making the investment now.”

U.S. Sen. Chris Van Hollen (D-Md.) would like to see COVID relief and infrastructure combined into one bill that could address multiple areas of the recovery at one time.

“My own preference would be to have a comprehensive bill that includes not only emergency relief but also funds to invest in modernizing infrastructure so that in addition to just keeping our head above water economically, we can actually begin to move forward,” he said.

McConnell opposed that approach in April, calling for any additional COVID spending to be focused solely on battling the pandemic.

“We need to make sure that whatever additional legislation they do is directly related to this pandemic and to get it in the rearview mirror and get the country back up and running again,” McConnell said, according to Roll Call.

McConnell’s level of influence will depend on whether he’s the Senate majority or minority leader, pending elections in January for two Senate seats in Georgia that could give control of the chamber to either party.

Some Washington observers have speculated that the long relationship between Biden and McConnell, who served together in the Senate for more than two decades, could help make a deal possible.

Biden is a product of the U.S. Senate and knows how to make deals to get things done, Cardin said.

“He knows the players, he knows Leader McConnell. And I know that he will reach out to Republicans and Democrats to get their help and support and buy-in on how we deal with our national problems,” Cardin added.

While Van Hollen expressed confidence that the Democrats would win both seats, he’s “personally skeptical that Mitch McConnell will deliver on some of those things” in the event Republicans maintain control.

But, “All that being said, one of the few areas where I can imagine some good bipartisan result is in this area of modernizing our infrastructure,” he said.

Trone said he thinks infrastructure’s impact on every American provides an array of reasons for both sides in Congress to work together.

“That’s what the American people want. They made that very clear in this election,” he said.

Shame we don't have any of those TARP funds leftover.

Might we actually have an Infrastructure Week for real this time?

I really hope so because watching bridges collapse while people travel over them is absolutely freakin' heartbreaking and shouldn't happen in the richest country in the world.

Trump never had any interest in infrastructure. It costs money, and he never saw how it made money for people using it. Like the Postal Service, he doesn't understand that if it doesn't rake in millions on its own, it does allow others to rake in millions. Infrastructure is a service (even if Gov. Hogan thinks it too ought to make money via toll lanes) that allows the rest of us to make a living.

But instead of talking to Congress about infrastructure, Trump got them to a meeting at the WH and then ambushed them with a photo op and pre-prepared signs about how awful democrats were, and infrastructure talks never even got started. We Americans are great at building things but terrible at keeping them in good repair. How foolish, since infrastructure repair and maintenance would put a lot of people to work who don't have tech degrees. It would enable them to make money and spend it. It will enable those who work in other industries to get to work, to move products, to make money. Maybe now infrastructure will get some attention.