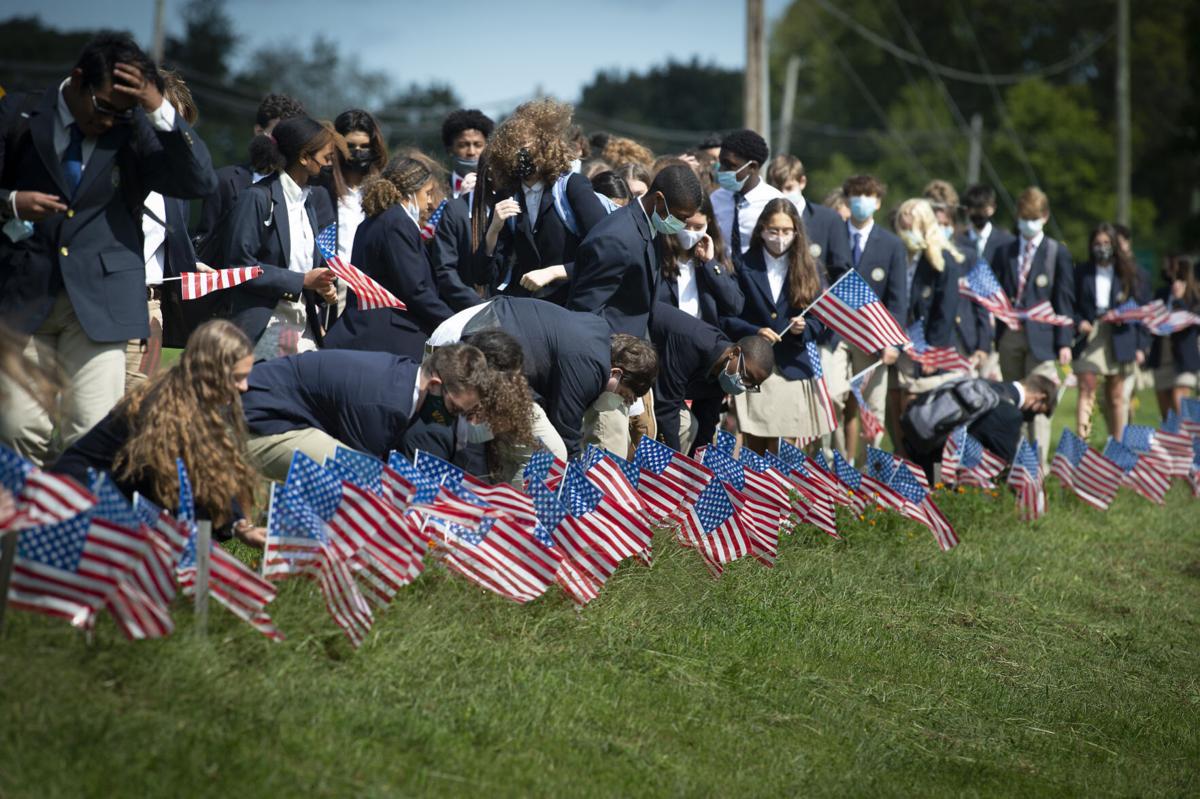 More than 300 students and faculty of Saint John’s Catholic Prep on Buckeystown Pike decorated the front of the campus Friday morning with American flags following a mass dedicated to honoring first responders and those who died on 9/11. 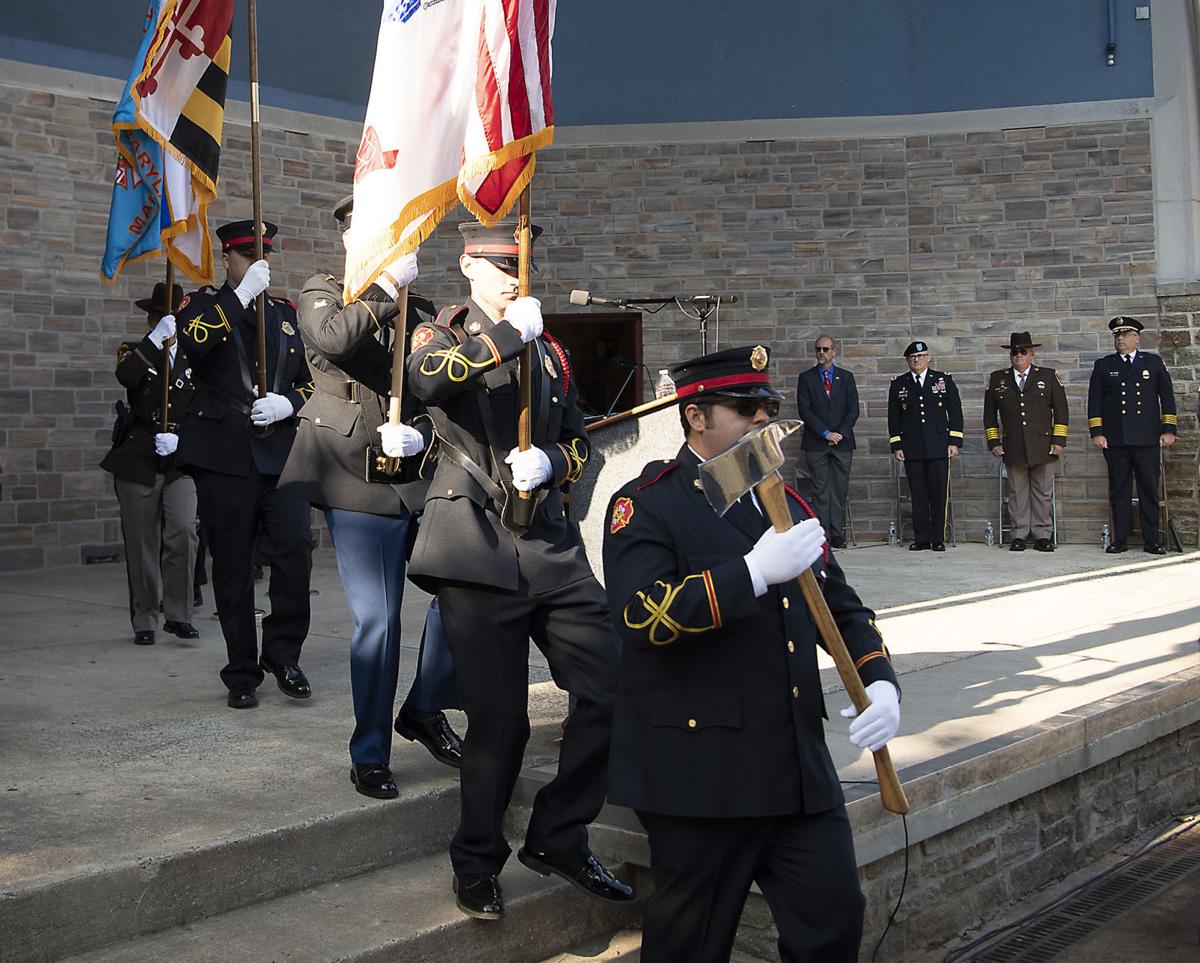 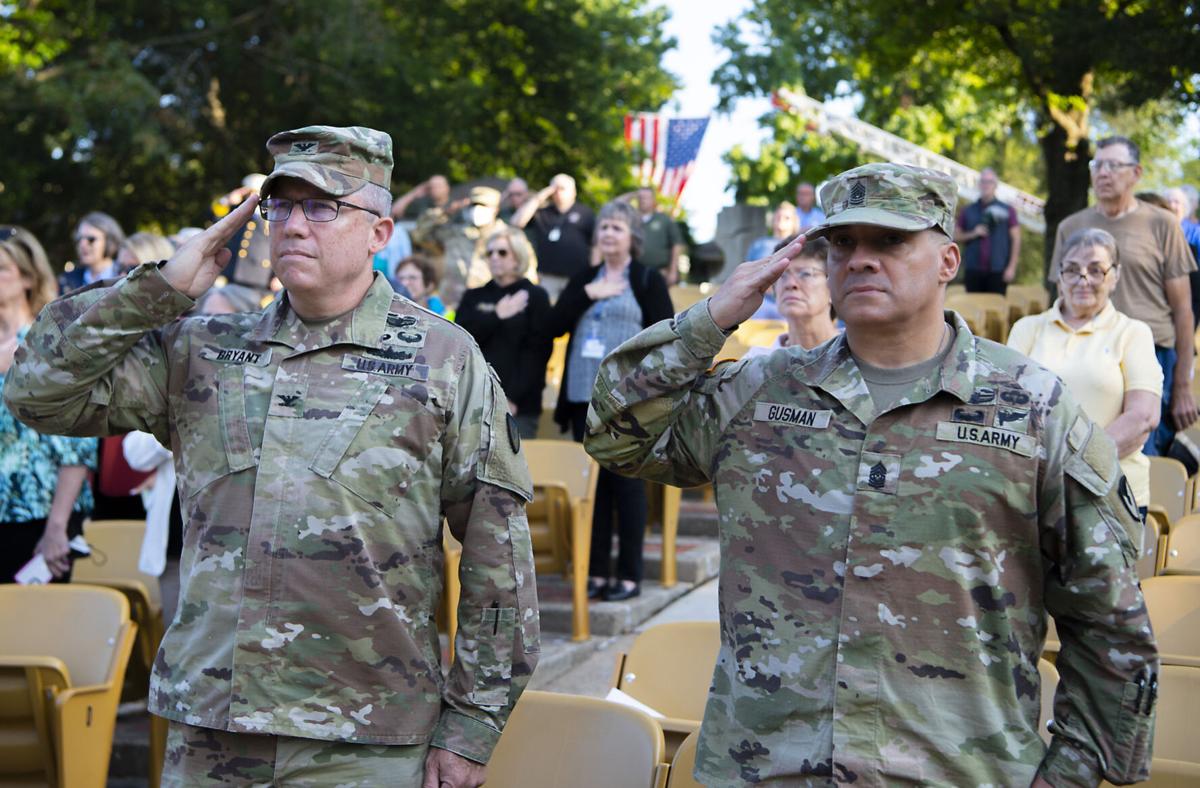 More than 300 students and faculty of Saint John’s Catholic Prep on Buckeystown Pike decorated the front of the campus Friday morning with American flags following a mass dedicated to honoring first responders and those who died on 9/11.

The refreshing, late summer air seemed to resemble the weather of Sept. 11, 2001.

“It was a day very much like this one,” Frederick Mayor Michael O’Connor said onstage at Baker Park Bandshell. “A primary election day in the city of Frederick that started as normally as most people’s days could but changed dramatically.”

On a calm Friday morning, one day before the 20th anniversary of the terrorist attacks that changed the course of the world, Frederick city and county officials, along with public safety and military personnel, gathered at the bandshell to recount their memories from the day, thank past and present public safety personnel and honor the fallen.

“While much has changed over the past 20 years, what remains the same is our community’s resilience and our strength when we stand together to face adversity,” County Executive Jan Gardner said from the bandshell stage. “We respond by taking care of each other.”

The scattered crowd, filling roughly one-third of the bandshell’s stadium seats, was comprised of public safety and military personnel, as well as local, county and federal government employees and local residents. A larger crowd may have turned out in the years immediately following the attacks, County Sheriff Chuck Jenkins said during his remarks. He said he wished the seats were packed.

Joan McGrath, a Frederick resident who attended the ceremony, was disappointed in Friday’s turnout too. She felt it was important for the community to come together to remember the tragedies that transpired two decades ago.

Like the officials who spoke Friday, McGrath can recite where she was and what she was doing when she first heard the news. At the time, she was on the opposite side of the country, in San Francisco. It was roughly 6 a.m. when her daughter, who was in Frederick, told her to turn on the TV. The twin towers had been hit.

The day is also clear in the mind of county Division of Fire and Rescue Services Chief Tom Coe.

Coe was a paramedic assigned to an ambulance at the time and had just returned from transporting a sick person to a hospital, he said. He’d begun his weekly inventory inspection of the ambulance when a firefighter ran over and said a plane had struck one of the towers.

Coe and his partner ran to the nearest TV, arriving in time to see the second plane fly into the south tower.

For Brig. Gen. Anthony McQueen, commanding general of the U.S. Army Medical Research and Development Command and Fort Detrick, the attacks reinvigorated a commitment to protecting U.S. interests and ensuring future generations grew up in a secure homeland. In 2001, he was an Army captain serving in Fort Hood, Texas. He was also the father of a newborn.

“Life as we knew it was never going to be the same,” McQueen said. “But one thing that didn’t change was our commitment …”

Mid-sentence, McQueen paused as the park’s carillon bells began to ring at 8:46 a.m., marking the time when the first plane struck the north tower. The park fell silent except for the tolling of the bells and the drone of a commercial plane passing overhead.

McQueen closed out his remarks with a phrase county leaders said often Friday morning: “We will never forget.”

The attacks remain with Frederick Chief of Police Jason Lando, too, and they solidified his decision to make law enforcement his career.

“It’s something I still think about pretty much every single day when I put this uniform on and come to work,” Lando told the crowd.

As a rookie police officer in Pittsburgh forced to work the night shift, Lando at times questioned whether he had chosen the right profession. The morning of 9/11, he’d returned from a grueling shift when friends and family called to tell him to turn on the TV.

Glued to the TV, Lando watched as New York firefighters and police officers ran toward the burning buildings as civilians fled for their lives. For the young officer, those moments reaffirmed the career choice.

After Lando concluded his thoughts, the bells chimed again, this time in remembrance of the second plane crashing into the south tower at 9:03 a.m.

As the ceremony ended and the color guard marched off the stage with the flags that had waved behind each speaker, those in attendance rose and left the bandshell in silence — another tribute to the nearly 3,000 people who died one day shy of exactly 20 years ago.

Remembering ‘The man with the red bandana’

Later Friday morning, Saint John’s Catholic Prep high school dedicated its opening mass to honoring those who died on 9/11 and celebrating the first responders and heroes of the day.

Prior to the service, Saint John’s faculty shared with students the story of Boston College alumni Welles Crowther, the “man with the red bandana,” who died after saving 18 people from the 78th floor of one of the towers and whose heroics were featured in an ESPN documentary. The same priest who founded Saint John’s in 1829 — making it the state’s oldest Catholic high school — also established Boston College, according to a news release from the school.

Following the mass, students received ribbons in the print of Crowther’s red bandana as a reminder of the young man’s heroism and selflessness.

“We must never forget,” Head of School Will Knotek said. “We hope this dedication teaches our students the importance of honoring our country.”

It is obvious, FREDERICK HAS LOST ITS SOUL.

“September 11, 2001, left an indelible image for the millions of people that watched the horror play out live on national television. The sight of the iconic Twin Towers blazing and collapsing will be forever etched in our memories. 2,753 people died in the collapse of the towers of the World Trade Center. Included in that number were 412 emergency services personnel: 343 New York City firefighters, 60 police officers, 8 private ambulance EMT/Paramedics and one member of the New York Fire Patrol. These losses hit home in Frederick when it was learned Alan Linton, son of Pat and Sharon Linton, was killed in the collapse of the south tower.” “We can never forget their sacrifices. The many heroes of 9/11 can never be forgotten.”

A Proclamation on Patriot Day and National Day of Service and Remembrance, 2021

“Twenty years ago, the United States endured one of the most unconscionable tragedies in our country’s history. The cowardly terrorist attacks on the World Trade Center, the Pentagon, and onboard United Flight 93 cut short the lives of 2,977 innocent people. These attacks tore a hole in the heart of our Nation, and the pain of this tragedy still remains. Each year on this somber date, we remember the horror and bravery shown that day, just as we remember how we came together, united in grief and in purpose. Each year, we renew our solemn vow to never forget what happened on September 11, 2001, or those who lost their lives.”

It is obvious that it is not considered a “somber date” in the City of Frederick. It would seem for their convenience; the Mayor and County Executive held a public remembrance on September 10th. A day when the fewest citizens could attend because of work or school. That certainly hindered parent’s ability to pass down, to the next generation, the significance of this solemn day by attending that remembrance, held by the elected officials, on the actual date.

It is obvious this day means little to “Celebrate Frederick” or the “Downtown Frederick Partnership.”

As reported in the FNP:

“Merchants, organizers look forward to return of In the Streets.”

“As one of Celebrate Frederick’s signature events, In the Streets is a celebration of the city’s musical, nonprofit and craft beverage communities as well as the community in general,” Jennifer Martin said.

“The festival makes a big day for the restaurant community in downtown,” said Kara Norman, executive director of the Downtown Frederick Partnership.

“Many restaurants offer outdoor dining as well as indoor, and the number of people coming downtown Saturday can certainly make for a profitable day, she said in an email Thursday.”

Clearly, “profit” is the driving force. They will not receive one penny for me or my family.

No doubt our city officials will be at “In the Streets” pressing flesh in this campaign season.

What’s next a “tap dancing competition” at Mount Olivet Cemetery judged by the mayor?

And celebrating the freedoms of being an American is offensive to you?