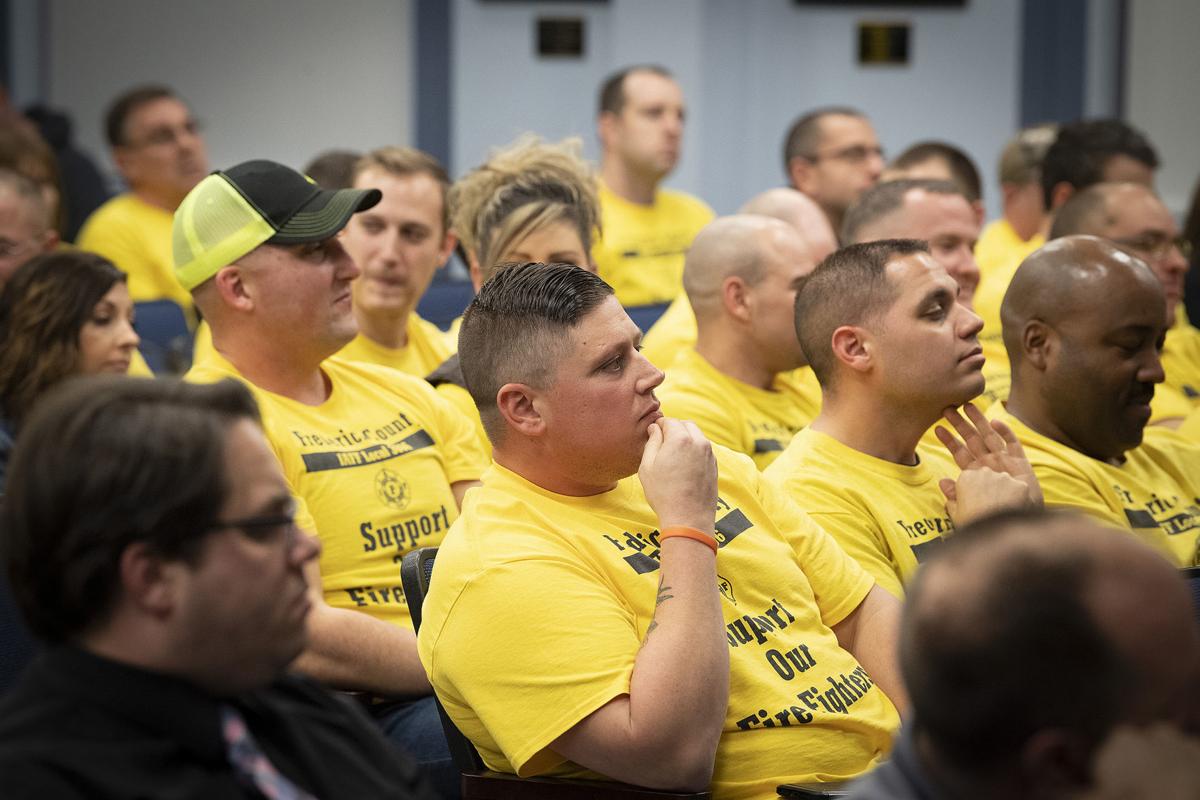 Members of the International Association of Firefighters Local 3666, the county’s career firefighters union, packed Winchester Hall on Tuesday night for a public hearing before the Frederick County Council regarding binding arbitration and collective bargaining. 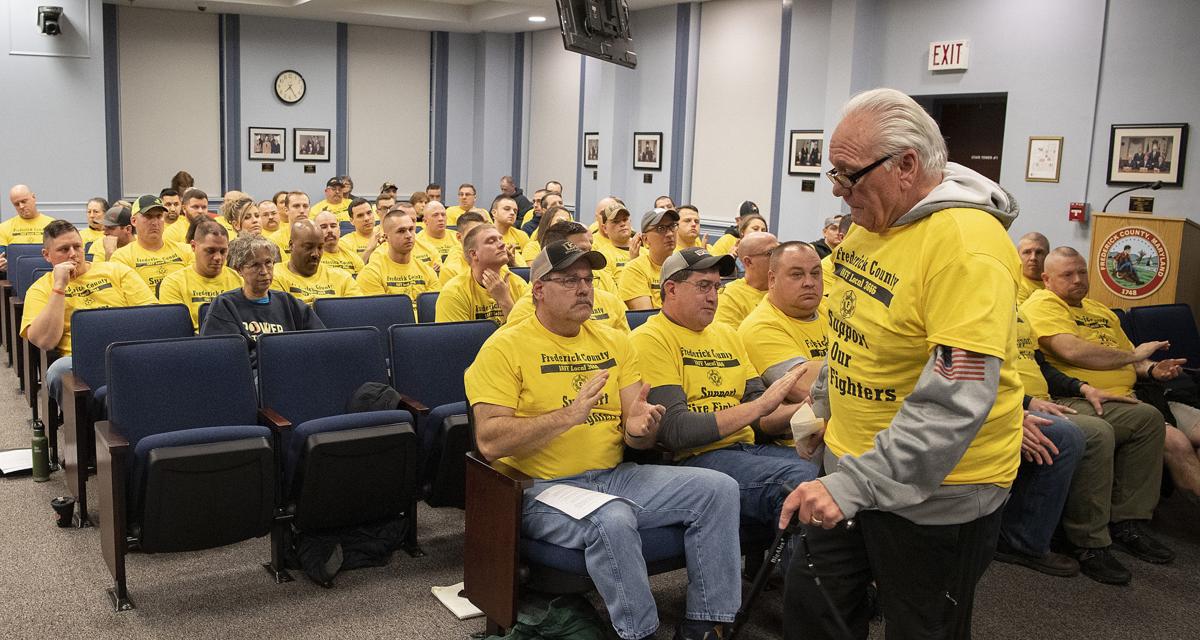 Members of the International Association of Firefighters Local 3666, the county’s career firefighters union, packed Winchester Hall on Tuesday night for a public hearing before the Frederick County Council regarding binding arbitration and collective bargaining.

More than 50 firefighters, most of them in yellow shirts, sat in the first-floor hearing room of Winchester Hall on Tuesday night.

Those shirts had “IAFF 3666” written on them, the abbreviation for the county’s career firefighters union. And those firefighters and others were present to persuade County Councilwoman Jessica Fitzwater (D) and other council members to amend a bill adding collective bargaining and binding arbitration, among other provisions, to county law.

The bill is a result of a ballot issue passed with more than 70 percent of the vote in November 2018, stipulating those provisions into county code. But many who testified at Tuesday’s public hearing said the bill does not fulfill the objective of that ballot issue, known as Question D.

Fitzwater introduced the bill in January, after meeting with a work group composed of county officials and the county’s career firefighters union, the International Association of Firefighters Local 3666 (IAFF 3666), multiple times last year.

The legislation defined an impasse procedure if both the county and IAFF 3666 officials do decide on binding arbitration, but firefighters were concerned that given the current language of the bill, any decision decided by a third-party arbitrator could be negated by the County Council through its budget process.

Stephen Jones, president of IAFF 3666, said the process between when work group meetings stopped and the bill drafting was not transparent.

“Why did we waste everyone’s time with this work group by blatantly ignoring the information from the subject matter expert and pencil whip the legislation behind closed doors?” Jones said. “What good does this do?”

Jones and several others cited Atkinson v. Anne Arundel County, a case decided in the state’s Court of Appeals in 2016. In that case, the court determined that counties should fund awards determined by neutral arbitrators — and IAFF 3666 members think this should guide Fitzwater and other council members when drafting the bill’s language.

Fitzwater said after the meeting she needed to “digest” the public hearing testimony before deciding whether to amend her bill. Other firefighters, however, echoed Jones’ concerns about the apparent lack of transparency in the bill drafting process.

Billy Rossomondo, vice president of IAFF 3666, said the council should not have the ability to cut from the third-party arbitrator’s decision, given what county voters passed in November 2018.

“I am before you ... to ask you to amend the legislation, do the right thing, honor the will of the voters, and move forward from the politics,” Rossomondo said.

Some who spoke were retired firefighters. That included John Neary of Middletown, a former president of IAFF 3666. Neary said the spirit of negotiations is damaged if the council has the ability to cut money from any agreement that county officials and IAFF 3666 reach.

“The idea is we come to the table, we bargain in good faith,” Neary said of that concept.

Charlie Snyder, president of Francis Scott Key Lodge Post 91 — the Frederick Police Department union — also testified in support of the ballot issue. He said council members should be approving the will of the voters, since they voted them into office and approved Question D.

The language would also help Frederick County recruit and retain firefighters in the long run, he said.

The council will either amend or vote on Fitzwater’s bill in the coming weeks. If it is amended, another public hearing is likely required, per the county charter.

And I voted YES.

The paid firefighters that I asked about the referendum both at the Fair and by the Senior Center before voting clearly told me this was about binding arbitration and pay equity. Sometimes you’ve got to ask questions.

This will be an easy repeal now that everyone that voted Yes actually knows what they voted for. The campaign for this was disgusting and this union showed their true colors...they want fat paychecks in Fred Co without the commute to areas closer to DC. Firefighters are respected for what they do and their job, but that does not give them the right to have campaigned for this in the way they did. Basically saying voting Yes was to help make Frederick County safer, more firefighters, etc. It had nothing to do with that whatsoever, but they knew saying Support Firefighter signs everything would equal a Yes vote. Shows how uninformed and gullible the average voter is Frederick County though too. I bet half of those 50 in the picture there live in PA.

I totally agree with harleyguy 6:25 a.m. comment. It was a scam from the start. They plastered the County with the yard signs and played on the public’s heartstrings to give the Union the ability to bankrupt the County.

They want more!? JC, that resolution essential gave them everything they could possibly want, now they just want it codified in law? Man, when public sector union members become the economic elite of an area- no matter how "heroic" they may or may not be- it is the economic end of that area. I lived in Erie county NY and experienced this first hand. Not pretty.

Wait a minute. I thought the referendum was about whether I like firemen.

Now Union leadership is telling us that we voted for binding arbitration? Which means an arbiter from Montgomery County could come up here and force the Council to raise Frederick County property taxes? No thanks!

I have a great distaste for public sector unions. If you don't like what you are being paid, find another vocation.

What you really don’t want to hear is that we (Frederick Co.) are training firefighters to have them leave to go to other neighboring jurisdictions 1. To make more money 2. To have access to binding arbitration. I know first hand because the last 2 rookies I had assigned to me left to go South East of the border with less than 5 years on the job. I could not encourage them enough to go, not because they were bad rookies I just wanted to them be appreciated their worth.

The problem with putting any if these referendums on the ballot is the way they are worded. The “question” asks you to vote yes or no on a oversimplified policy change. Conversely, there is no description of the status quo you would be voting for if you select no. And most people have no idea what the status quo is in these situations. People are basically asked to vote for something or nothing, and their uninformed instinct is to vote for something rather than nothing.

Blame the voters for this mess.

Blame the crooked politicians for this mess

The fact that this passed by a vote and the counsel is refusing to inact this ordinance as voted on, it will cost the county in the long run. This opens up the county to be sued by the Firefighters union.

Not if the union makes the sensible decision not to sue.

I wonder what the firefighters would do if arbitration went against them. They seem to be assuming that they will win whatever the issue is.

They would have to accept it. They would be legally bound by the arbitrary decision. They cannot act like the county and say "well, since we dont like the decision, we will stop running call or better yet, Strike"!

Question D was a campaign of deception, half-truths, false and misleading information created by the union leadership and their paid lobbyist. They duped our citizens into believing they did not have bargaining rights, had no “seat-at-the-table”, needed a voice and made them believe they are treated unfairly. The truth was easy to discover if you did your research. They have had collective bargaining for many years and have had voting representation (a-seat-at-the-table) on every significant fire-rescue policy making group for many years. They have and have had a stronger voice in policy discussions than any other firefighters’ union in the region. This is why their campaign could not have been based on the truth. They could not give our citizens a true description of their status because the truth would have revealed just how well represented the union is and has been for many years.

Every union contract the County agrees to in negotiation is and has always been subject to the funds needed being considered and approved in the county budget. The County Council is wrong to hand over blind control of county spending to an arbitrator. THEY are the ELECTED representatives that along with an ELECTED County Executive are charged by the citizens to control the spending of tax-payer monies. While the voice of a third-party arbitrator might be helpful in final decision-making, it should never be absolute and any provision in the pending legislation that would hand over such control should be stricken from consideration.

If you didnt understand what you were voting for you should have skipped the question on the ballot. The language on the ballot stated "Binding Arbitration" how is that deceptive?

Or voted no. Open ended contractual commitments are usually a mistake- no matter how much you "like" firemen.

You truly need to brush up on your facts.

1. The IAFF has been denied numerous times throughout the years, most recently 2008-2012 if my memory serves me correct where the county commissioners have openly said that we are not meeting with you to discuss a new contract. For years, those people went with any type of pay raise while other departments did see multiple raises.

2. Policy is not in any form a bullet point in a contract i.e. wages, benefits, living conditions etc. They do have a equal say along with the FCVFRA when it comes to policy implementation. That has been the norm of quite a few years. That entails day to day operations and response to emergencies. Those are policies set forth and adhered to by both paid and volunteer.

3.The arbitrator will look at both sides, the current financial situation of the County and make their decision. If the IAFF ask for $2 bucks for a cup of coffee and the County has $1 dollar in their piggy bank, the arbitrator won't give them the 2 bucks. The County is good at hiding money. Go to Winchester hall and do some digging. You'll be shocked to see how much is in hidden reserves and rainy day accounts. Then let them lie to you and say that they are tight on money.

Ed; that was not very helpful or informative.