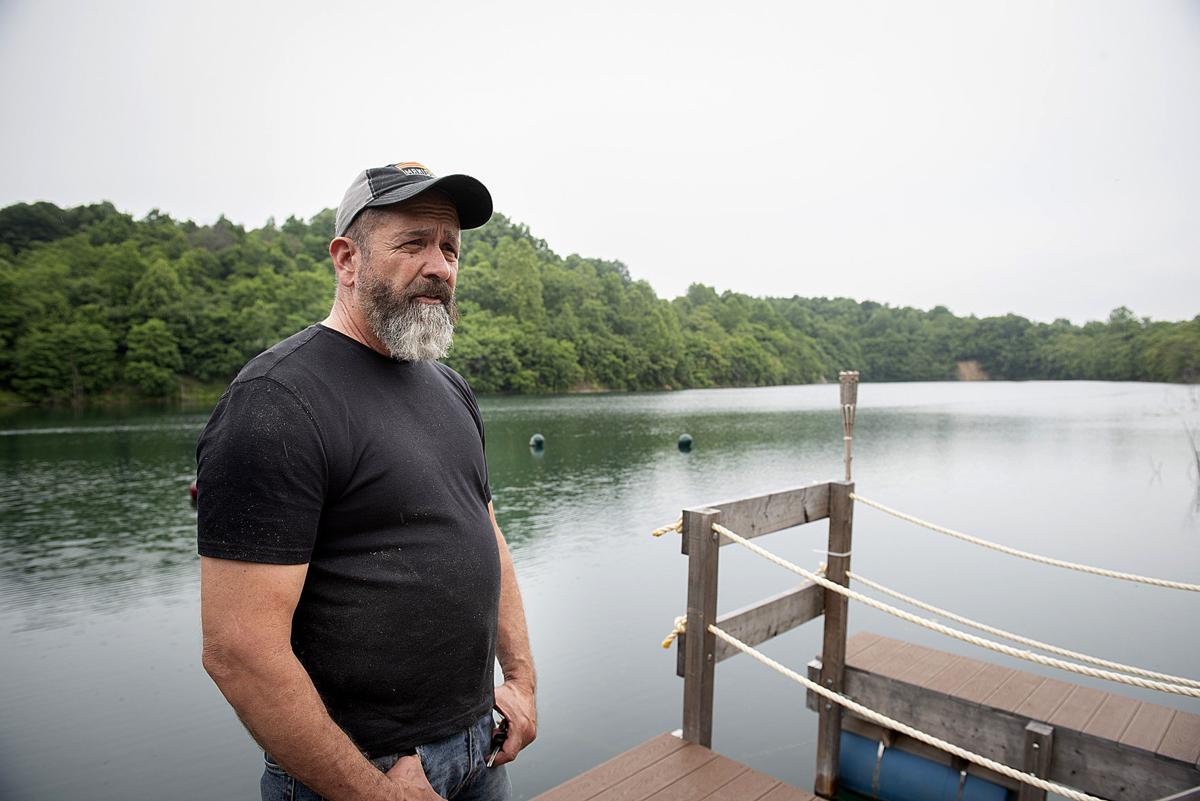 Woodsboro-area resident Brad Hill hopes to create a facility revolving around this reservoir north of his mining operation and Md. 550 that could be home to scuba-diving lessons, sessions and related attractions. 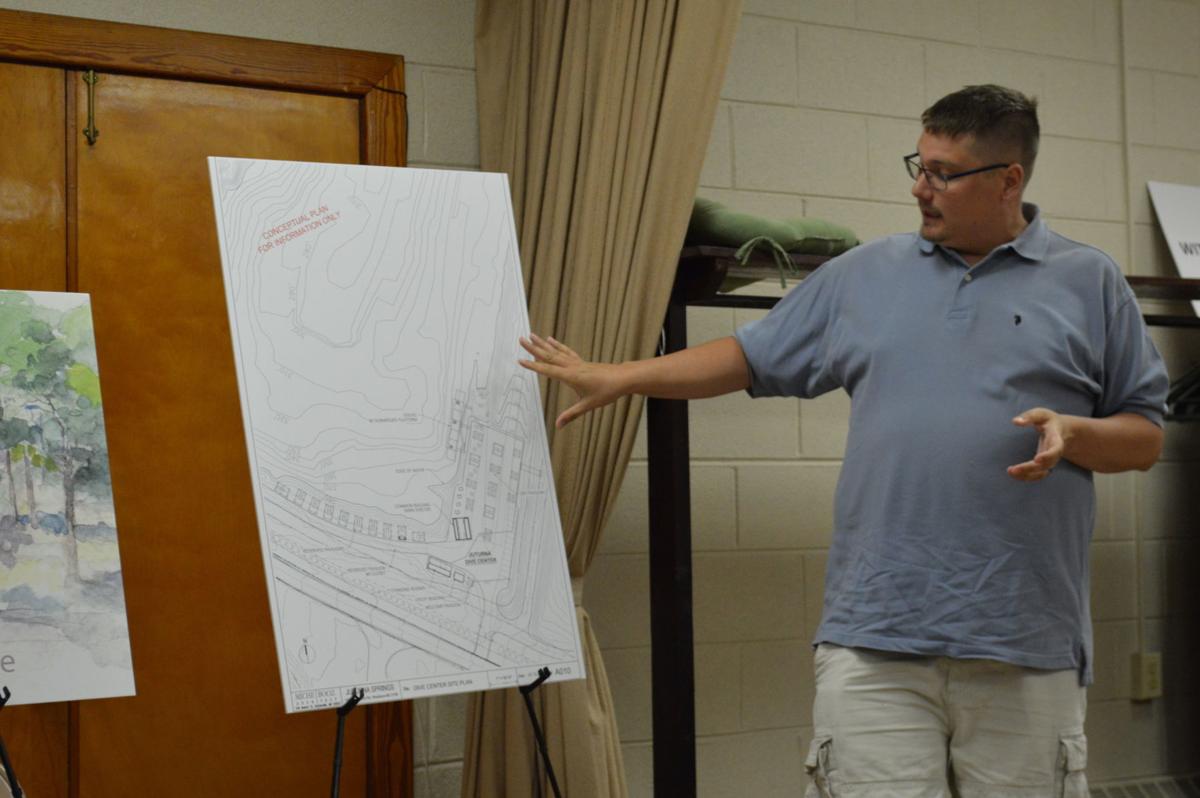 Aquanautics owner and scuba diving instructor Matt Skogebo explains a proposed scuba-diving and recreation center at a reservoir near Woodsboro at a town meeting Tuesday night.

Woodsboro-area resident Brad Hill hopes to create a facility revolving around this reservoir north of his mining operation and Md. 550 that could be home to scuba-diving lessons, sessions and related attractions.

Aquanautics owner and scuba diving instructor Matt Skogebo explains a proposed scuba-diving and recreation center at a reservoir near Woodsboro at a town meeting Tuesday night.

The Frederick County Council could consider a change later this year that would help jump-start a proposed scuba-diving center and related attractions near Woodsboro.

Council Vice President Michael Blue (R) has taken the lead in drafting a change to the zoning law that would benefit Brad Hill and Matt Skogebo, the two partners attempting to complete the project.

Hill owns Comus Construction, a local mining operation and the reservoir where the scuba operation and facilities would be located.

Skogebo owns Aquanautics, a scuba training shop near Baltimore, and recently established Juturna Springs, a nonprofit, as the entity that would operate an ecology learning center, the diving operation and other parts of the project.

Blue said the main point of revising the county’s mineral mining zoning code would be to allow scuba diving and other recreational uses. The amendment is being reviewed by county planning staff, he added.

“Everyone thinks it’s just a couple sentences. Well, no. It’s a big deal since you’re changing what our Frederick County law states is allowable use in zoning, and they don’t take that lightly,” Blue said.

According to the county code, uses in a mineral mining district currently include “Mineral extraction and processing, including grinding, polishing, washing, mixing and sorting, stockpiling, and manufacture of finished products which contain at least 40 percent of material derived on site.”

Blue said Senior Assistant County Attorney Michael Chomel was instrumental in helping to draft the zoning change. County planning staff are reviewing it, but given the council’s schedule and summer recess, any workshop on it will most likely occur in September, he said.

Chomel said Wednesday that the change to the county’s mineral mining zoning code is brief, but allows scuba-diving instruction and recreation, along with “accessory uses and facilities,” which would include the ecology center, clubhouse and other components.

“The zoning text amendment does not address the scope and actual operation of the scuba-diving facility. It merely permits it within the zone,” Chomel said.

Those regulations come from federal and state law, he said.

At a town meeting in Woodsboro on Tuesday night, roughly 20 residents and the town’s Board of Commissioners heard an update from Hill and Skogebo about the proposed project.

Town officials are curious to hear more because it might benefit them if the reservoir site is annexed into the town limits. Commissioner Gary Smith, however, was concerned as to whether the town could provide the infrastructure needed for the project.

“I see the potential, as long as I can see [the proposal] and it doesn’t harm the town in any way,” Smith said after the meeting.

Hill, however, had a direct message for residents and the board about the proposal.

Skogebo said after the meeting that the project, if the zoning changes are made, would be completed in three phases. First, the scuba diving and training operation would be completed, including bathhouses for visiting divers. Then, the ecology center, run by Juturna Springs, would open. Lastly, a restaurant and clubhouse would open north of the reservoir.

All of that is estimated to cost up to $30 million. Skogebo said financing has started, but his main focus is on getting the zoning changes approved.

Both he and Hill said they still want to pursue annexation into Woodsboro, whether to increase the town’s tax base or allow a possible water supply into the town.

But Burgess Bill Rittelmeyer said the zoning change would have to happen first. According to state law, if Hill and Skogebo wanted to pursue expedited annexation, they would have to wait five years before changing the county’s zoning code.

Regardless of whether the annexation occurs, Skogebo said the project would have a “massive impact” for scuba divers in the region.

“You’re talking 20, 30 shops regionally that now have a place that’s 40 minutes to an hour away, instead of three and a half [hours],” he said.

“It could be such a large attraction. ... It’s not the Grand Canyon, but we got a small one in our backyard, filled with water,” Boyer said.

Situated about a mile southeast of downtown Woodsboro sits Comus Construction, a property of more than 1,000 acres where Brad Hill mines pozzo…

Looking forward to being able to dive and train at Juturna Springs again. I was there last fall for a day of training and I was impressed by how much thought and effort the owners had put into creating a fun and safe location for diving. The visibility is good, and the facilities, though not luxe, were definitely a step above other locations. This will be a great site for divers and diver training from at least three states, and will bring dollars into the local economy.

We went to the Cayman Islands a number of years ago. They had a training course for scuba diving. All the trainingwas done in the swimming pool. After a couple of days we went on a shallow dive, in the harbor. A shallow dive is 40 feet. We went down to a boat that had sunk in the harbor. My problem was my ears hurt a lot. I would go down to feet and go back up 2 or 3 feet. We got down and went the length of the ship and back up - slowly. I am sure if I didn't have a skilled diver with me, I would have gone up to fast. It was fun, but once was enough. I could never get over the thought of 40 feet of water between me and oxygen. Oh, one item in the training is to be able to take out the mouthpiece, blow water out of it and put it back in, all under water. For me, that was not a challenge, but the trainer said many have problems with that.

I’m so happy for you Dickie :)