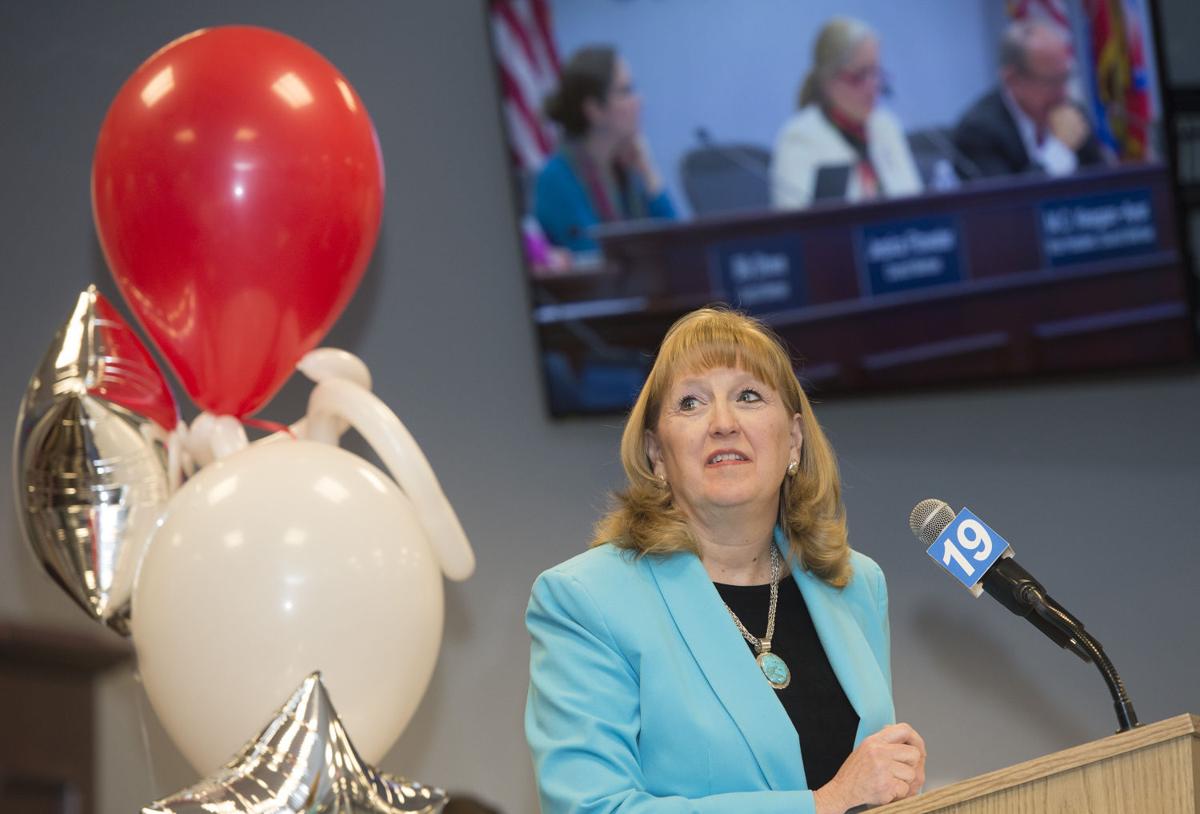 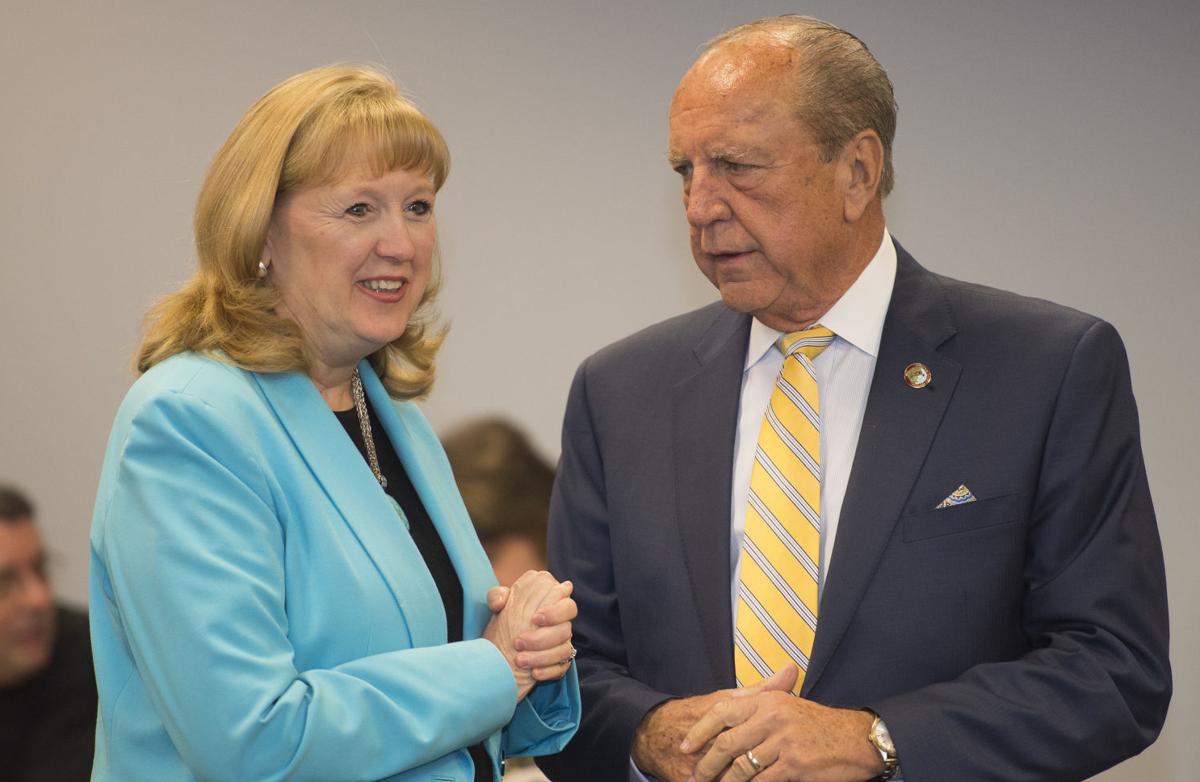 “When I walked into this building a year ago, I didn’t know more than a half dozen or a dozen people. Our offices were not assigned to us,” Council President Bud Otis said. “There was not a sheet of paper on our desks with rules or procedures or anything.”

After a year, the council has settled into new offices on the building’s first floor and County Executive Jan Gardner’s team is getting ready to move into permanent offices in early January.

“It’s been a tremendous learning experience,” Otis said. “But we’re moving and things are happening and that’s what people want us to do.”

Gardner held a celebration of the first year of charter government in Winchester Hall last week, which Otis joined.

Among the actions taken by the council members and county executive in their first year were a number of reversals of decisions by the former Board of County Commissioners, including re-hearing the Monrovia Town Center approval, backtracking the Citizens Care and Rehabilitation Center and Montevue Assisted Living sale, taking a fresh look at long-term planning, and overturning the so-called English-only ordinance.

While some of the issues remain unresolved, council members and Gardner said they are looking forward to new initiatives in the council’s second year.

“In this past term, we were spending quite a bit of time on issues that were carryovers,” Otis said. “I’m quite delighted that those are coming to an end and we can look forward.”

Gardner said one of her primary goals as county executive was to change the transparency and trustworthiness of government, not on undoing the work of the former county commissioners.

“My goals were my goals. They were things I stated that I would do in my campaign. They really had nothing to do with anybody else’s actions,” Gardner said.

Looking at her campaign promises, Gardner said she’s at least started work on all of them: managing development, prioritizing education, expanding economic development, retaining Citizens and Montevue, and increasing transparency in government.

“I haven’t accomplished everything. I have at least started everything,” Gardner said last week. “I really set out some high expectations for myself and for this administration.”

One of the first things she and the council set out to navigate was a new budget process. Gardner proposed a spending plan, which was largely adopted by the council, and increased funding for public safety and education, among other initiatives.

Gardner also touted work she’s done outside the county – partnering with other county executives to expand the influence of Frederick County, which has a relatively small delegation in the State House in Annapolis, compared to other jurisdictions.

However, Gardner considers her work to retain control of Citizens and Montevue as her most significant accomplishment in the past year.

“This allows us to keep our promise to our senior citizens, honor the deed that has run with the land for many years, and to protect the taxpayers from what was a very irresponsible and bad financial deal,” she said.

The transition process for the care facilities is expected to take at least a year.

The county council adopted 11 bills in its first year – eight of them advanced by the county executive’s office.

A ninth bill pitched by Gardner – to amend the county’s ethics ordinance – was pulled by Otis after a public hearing revealed potential changes to the proposal.

Gardner’s office did not use its veto power in the first year.

To start its second year, the county council will take up unfinished business first by considering a re-tooled version of the ethics bill.

He has caught flack for his weekly meetings with Gardner, where he says the leaders have frank discussions about upcoming legislation and county governance.

“I know some give me a hard time for that, but I’ll take it. Because I want good government for this county,” Otis said.

He hopes there will be more unanimity ahead among the council, and fewer votes falling and passing with 4-3 counts. There were 54 such votes in the first year, according to a tally by The Frederick News-Post.

“Our council is made up of seven different individuals and at least two or three different perspectives,” Otis said. “We have four members that are going to get it done and we’d like to get five or six or seven.”

But healing rifts between council members has proven to be difficult so far.

“You have a lot of smart people who are collectively dysfunctional,” Councilman and former county commissioner Billy Shreve said last week. “I don’t think there is a working relationship. It’s the worst relationship I’ve ever seen.”

Shreve abstained from 61 votes in the council’s first year, a move which his council colleagues have criticized from their shared dais.

Shreve said the abstentions are not political grandstanding, but he will not cast votes when he feels there is not enough information on an item. That includes every vote relating to the county’s budget until the council has its own budget officer and every item on which he feels county staff has not provided enough information, Shreve said.

“I hope it will get the attention it deserves,” Shreve said.

Fitzwater said at the council’s last meeting of the year that she also hopes the group can work collectively in the future.

“I hope to hear a more positive attitude from some of my colleagues up on the dais and really encourage them to start introducing legislation or start meeting with other members of the council if there are initiatives they’d like to move forward,” she said.

Councilman Jerry Donald said he didn’t think things weren’t going smoothly in the first year, rather it was a learning process.

“I think in the first year, we had to deal with our inter-relationships on the council,” he said. “I think, by the time this group finishes its first term, things will be smooth.”

We have pulled together our top stories in terms of audience and importance to the community. Now it's your turn to rank them. We'll share the…

County Executive Jan Gardner goes to war over who should own and run two facilities for poor elderly patients, the county or the private compa…

Billie Boy--perhaps we should have known more about you before we cast our vote. You have a great job, what with being paid for doing nothing except wondering where your $10 key money is.

With 61 no votes Billy is not fulfilling his obligation to the citizens of Frederick county.

I would like to than Jan for doing a good job, a tough but good year. Bud Otis far exceeded my expectations, thank you, Bud. Jerry Donald has done an excellent job and I would like to thank all the rest for their efforts. Bud, don't worry about the ones that don't understand politics and the necessity of communicating. We understand their nonsense and will not let it affect our opinion of you.

All of the complaining by Billy Shreve over the past year of charter gov't. Yet, he wanted the job.

Perhaps it is he who should have taken he time to research how the process works, or else he should have abstained from running.

Congratulations to.Jan and Bud for forging a working relationship.
Billy puts the dys in dysfunctional.

Yes, but Billy not voting 61 times means he is unwilling to do his job, which we are paying him to do, we could have elected Linda or Susan, they would have done the job that needs to be done. I have never agreed that Billy needs his own budget officer, he just wants to set up a competitive fiefdom to cause problems.

Billy is a sore loser.

I'm sure Charles Jenkins will have something to comment