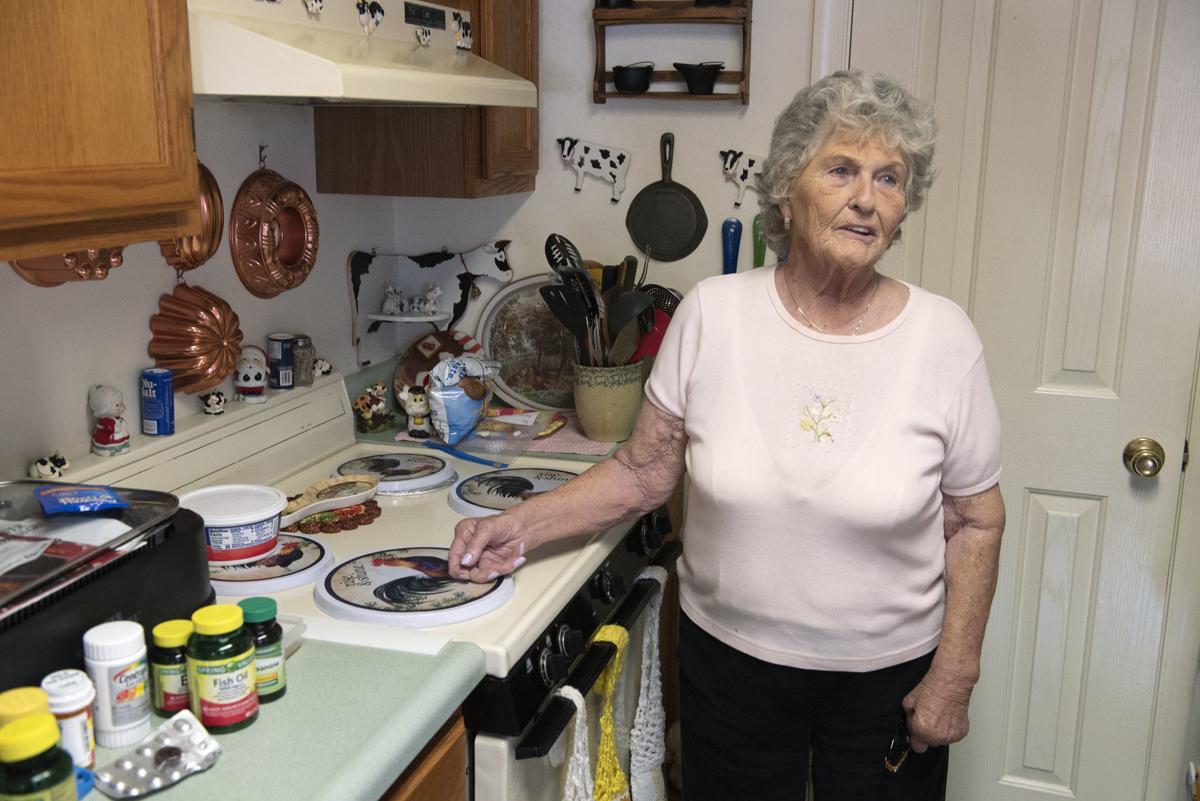 Libby Baugher talks about her stove in her apartment at Bell Court Senior Apartments. 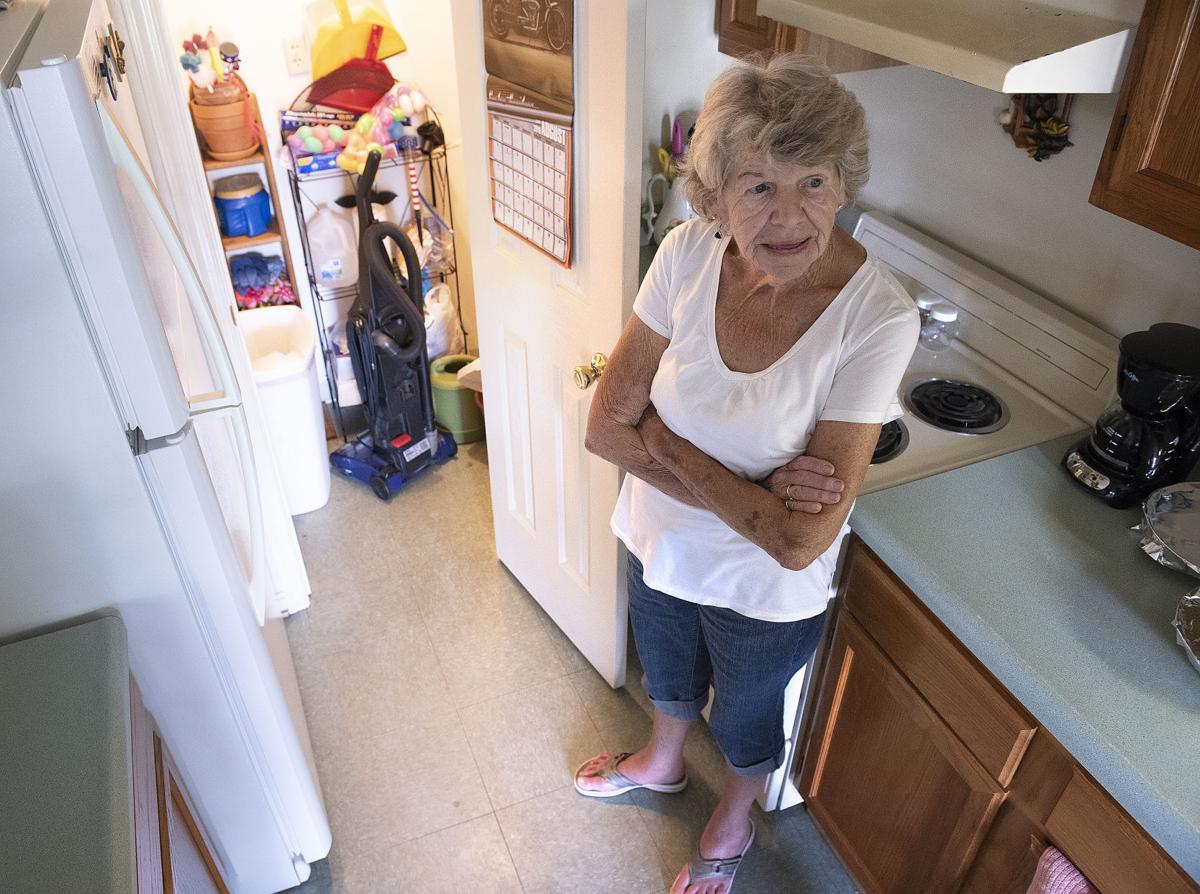 Marie Cullop is looking forward to having the floor of her kitchen and closet replaced in her home at Bell Court Senior Apartments. 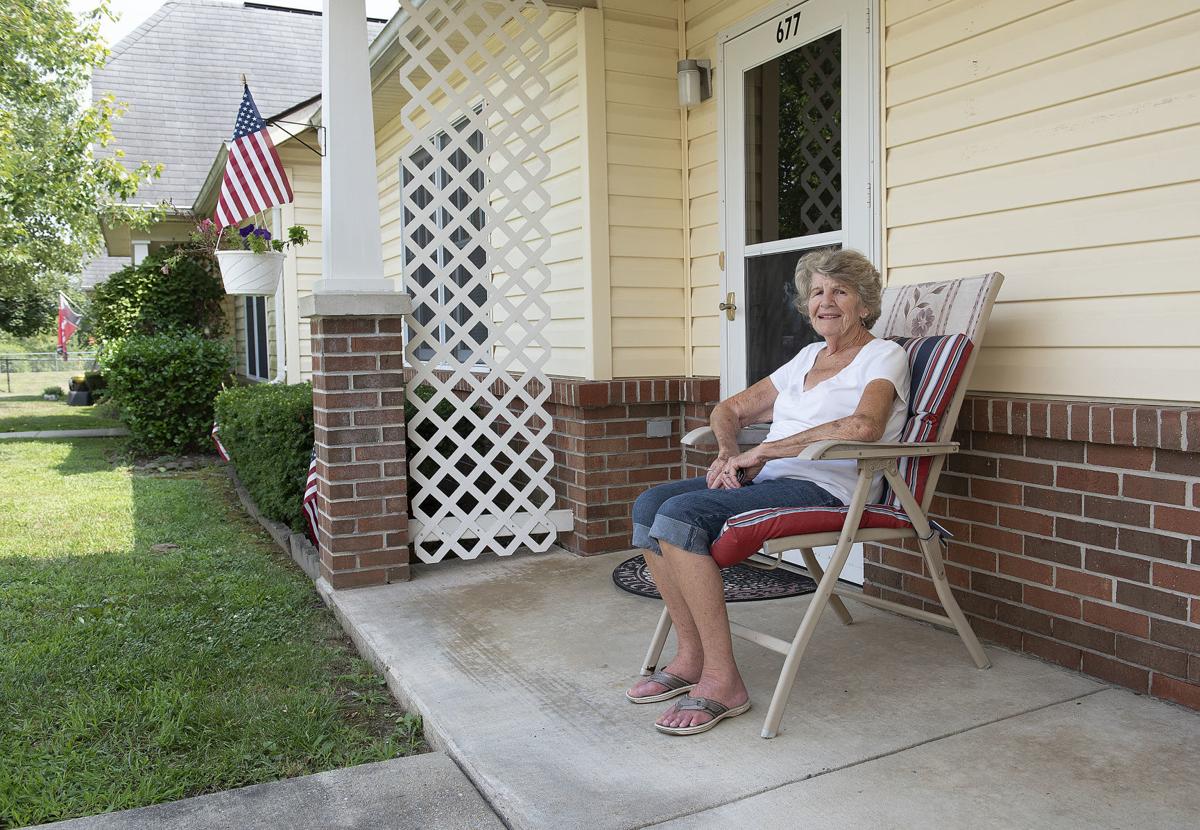 Marie Cullop sits in front of her apartment Thursday at Bell Court Senior Apartments in Woodsboro.

Libby Baugher talks about her stove in her apartment at Bell Court Senior Apartments.

Marie Cullop is looking forward to having the floor of her kitchen and closet replaced in her home at Bell Court Senior Apartments.

Marie Cullop sits in front of her apartment Thursday at Bell Court Senior Apartments in Woodsboro.

Libby Baugher has lived in her apartment on Bell Court in Woodsboro since the 24-unit senior living complex opened on Dec. 1, 1996.

Since then, not much has changed in the one-bedroom town house-style apartments — the roofs are the same, along with the tile in the kitchen and bathrooms.

But there’s one area that Baugher, 84, specifically pointed to inside her apartment that needs to be replaced.

“The stove is the worst,” she said. “The big burner won’t stay lit.”

Now, through community development block grants from the state’s Department of Housing and Community Development, Baugher and several other residents at Bell Court will see many improvements to their apartments and central community room.

Milton Bailey, director of the county’s Department of Housing and Community Development, said the funds will be split between the Bell Court improvements and the county’s Homebuyer Assistance Program, helping provide between $8,000 and $10,000 to first-time homebuyers in down payment or closing cost assistance.

Susan Brown, the county’s housing program manager, said improvements to Bell Court would include roof replacements, new gutters and downspouts, sprinkler systems inside and new stoves and tiled floors in the kitchens and bathrooms.

The other $400,000 will be used for the Homebuyer Assistance Program, which is run by Heather Sutton, the housing program coordinator. Sutton said she has a yearly budget of $500,000 to fund that program, which is used by an average of just shy of 100 families per year.

She added that she has two years to spend the $400,000, which will allow her to increase her loan amounts and the number of clients she serves.

Both she and Brown said state programs are competitive. Bailey pointed out that the state typically has around $6 million to $8 million annually to distribute to local jurisdictions, including various cities and counties statewide.

“We’ve applied before, and have not been chosen for our programs,” Sutton said. “All kinds of people are applying for these funds.”

Applying for the grants includes writing a lengthy narrative for the proposals, justifying the county’s need for the funds, Brown said.

Bailey added that the state’s Department of Housing and Community Development considers a number of factors when awarding grants.

“The metrics we get measured by is how efficiently we use the funds, how well we leverage the funds and how well we get the funds out into the community, and so far, we have high scores on all those metrics,” Bailey said.

Regarding the Bell Court improvements, a 90-day environmental review will be completed by state officials by early October, and then the money will be released, Brown said.

She added that the county will start a procurement process and the work should be completed around the end of the year.

Bailey hopes the $800,000 in grants allow his department’s staff to pursue and obtain more funding for future housing needs.

“It’s very much a part of our job to keep current with the specs of what’s currently available, what ancillary opportunities there are to provide housing and homeownership opportunities for people through the county,” Bailey said. “Whatever the state or HUD [U.S. Department of Housing and Urban Development] is putting out in terms of an RFP [request for proposal], if it has an application or use in the county, we’ll go after it.”

The Homeowner Assistance Program helps first-time homebuyers by offering loans of up to $10,000, depending on income levels. Heather Sutton, the county's housing program coordinator, said in order to qualify, households must make no more than 80 percent of the area median income.

To answer your question, FCPS, - not necessarily. There are rental complexes who get rid of good men who are skilled maintenance men and who have the skills and certification in HVAC. I have known guys who, through no fault of their own, have lost their jobs after many years only to be replaced by unskilled/low skilled workers who totally mess up what they are to perform. I have known cases where the original guys got hired back because the ones messed up so badly that it just could not be tolerated.

Another aspect is that parts are not necessarily available any longer. Depending upon the situation, parts are not manufactured as a high quality and effective product. Certain things are also considered to have a "life cycle." Refrigerators are one such item. It is more efficient to replace some things with brand new appliances where it is likely to be more reliable, as opposed to trying to obtain parts and, in the meantime, the affected people are doing without refrigeration.

My bathroom tiles date back to 1973 (I moved into the house in 1995). I owned a home in SW VA, but when I moved back to the MD area I had to rent for 5 years and had roommates (not that I wanted roommates) in order to save money to buy a house in MD. If you want something bad enough, generally speaking, with proper planning and execution you can and should work to obtain it. I'm not asking to be taxed less, but I'd rather see $400k in first time home buyer assistance go to supporting protection of the environment or defraying costs for serious childhood illnesses, etc.

This is a senior living residency. Many of the people living here are locals and the backbone of this area from decades ago. Many worked hard on local farms and local support jobs when this was still an agricultural strong area. They are not freeloaders. They've earned their new floors.

First, my comment was directed more at the 1st time home buyer assistance. Second, if the floors or other conditions are that bad shouldn't the county enforce its "minimum livability code" on its own units (i.e., Section 1-6-36 C(1) Unsafe Equipment)? The county/city should be budgeting for proper maintenance for all of its infrastructure (government owned housing, roads, sewer systems, etc.) and not rely on periodic grants.

This is one of the problems with (Federal or state/county) government housing. Such tenants have to wait through delays to get anything positive. Look at the timeframe for getting new stoves and any other necessary work. Dealing with things in October and the stoves to be installed later than that. Such is the typical "housing authority" process. This is why I sometimes make comments on "affordable housing" whereas the tenants have to wait as opposed to living in housing managed by a private enterprise. In a higher-end housing situation where the lessor cares about their residents, broken stoves would be remedied within a very short period of time.

To take this further, it's a form of "beggers can't be chosers." Smart, prospective renters are wise to the fact that "affordable housing" means that a housing authority does the bare minimum. Just as an example, local officials always tout that "teachers, firemen, and police" can avail themselves of "affordable housing." However, people in those professions generally have a higher salary that will preclude their eligibility. (And, if they have another source of income; e.g., a spouse, they don't want that housing for various reasons; bare-bones features, crime, and not being able to get maintenance/repairs done promptly).

Don't the owners of these apartment buildings have some responsibility to the tenets? Shouldn't they have to replace the stoves and repair the infrastructure?

That's the purpose of this grant. To update the infrastructure on the units. This is a county maintained property.