The town of Walkersville will offer curbside yard waste pickup starting next month.

Earlier this year, town officials signed a contract with J&J Trash Service Inc. to do curbside pickup on a weekly basis on Tuesdays from March 3 through Nov. 30 of this year for $68,370. The move is in response to the county closing the yard waste site at Heritage Farm Park at Devilbiss Bridge Road late last year.

Kevin Demosky, director of the county's Division of Utilities and Solid Waste Management, said this week he understands some residents in Walkersville and northern parts of the county might be upset the yard waste site is closed.

He added, however, that the site wasn't intended to become a "regional facility," per the original agreement in 1994 between the county and town. 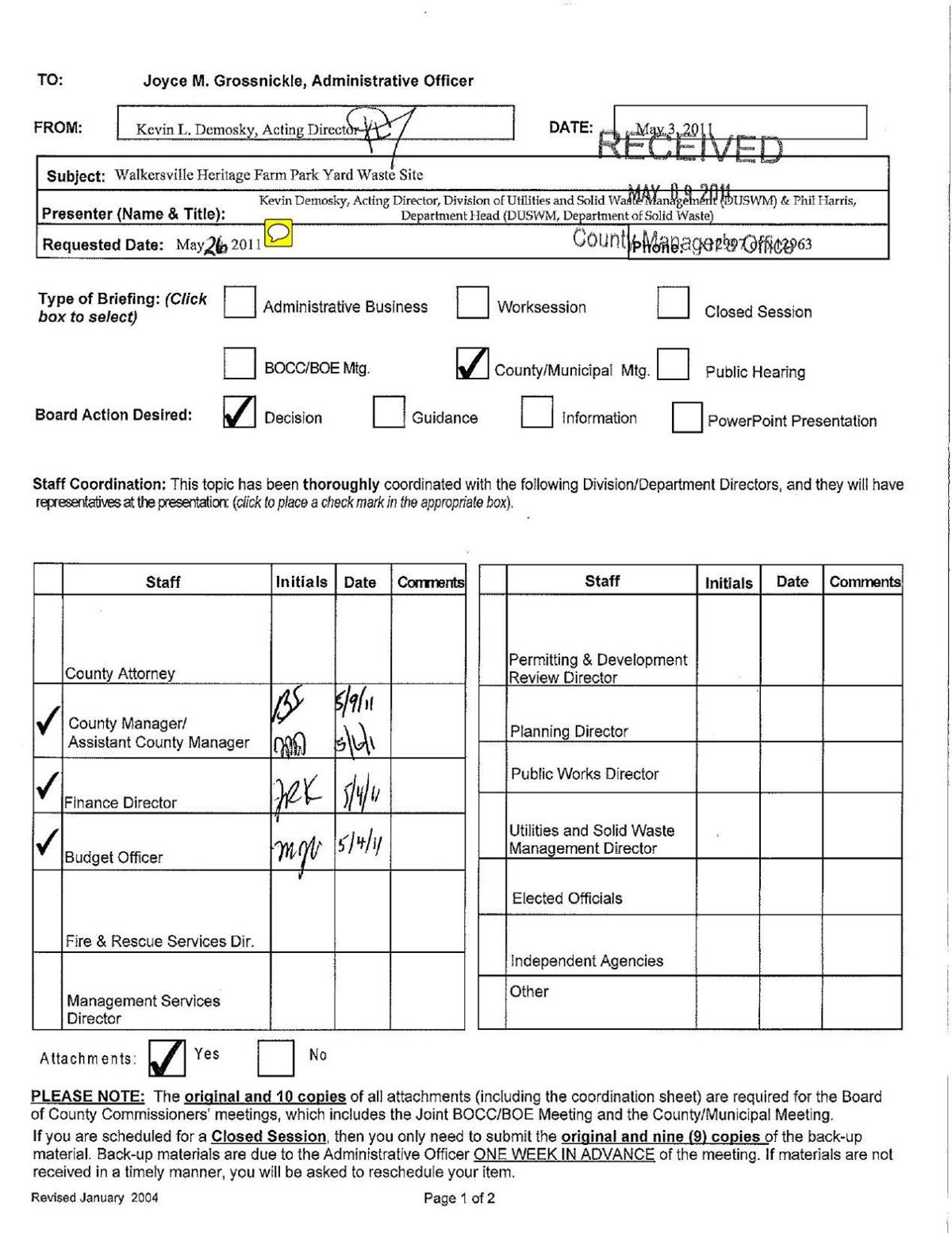 "I recognize that those that who got used to that convenience, although it never was intended to be regional," Demosky said.

The yard waste site was closed because people were dumping materials that shouldn't have been dumped, the overall cost of staffing the site and many other factors, The Frederick News-Post reported last October.

Demosky said residents outside of Walkersville can bring their yard waste to the county landfill on Reichs Ford Road, as long as it is not "land-clearing debris," meaning large branches, tree trunks and similar material.

Residents in Walkersville, via the curbside pickup program, can place grass clippings, leaves and branches no larger than 4 feet long and 4 inches in diameter in recyclable paper bags or a plastic container labeled "Yard Waste," according to the town's guidelines.

Walkersville Commissioner Michael McNiesh said the county is offering financial assistance to help pay for the first year. Town Manager Gloria Rollins confirmed that Wednesday, and added that after the first year, Walkersville officials will need to pay the entire cost of curbside yard waste pickup.

Burgess Chad Weddle said he plans to meet with county officials after the town's budget cycle this year to see how much the county can pay for reimburse the town for the program's first year. He added he hopes it's at least half of the overall cost.

Demosky said the county would not use any money from its General Fund budget to pay for its share, meaning no taxpayer dollars will be used.

There have been complaints about the site closing, Rollins said. And she understands the concerns of county residents, especially those that live upcounty and not in a municipality like Walkersville.

"There have been a lot of reports of people dumping stuff along county roads, so that’s kind of disheartening that’s happening, Rollins said. "It kind of shows how the site was misused before, with [people] putting things there that weren’t acceptable."

She added she didn't know what the future plans of the Heritage Farm Park site were, but McNiesh said one proposal is eventually reseeding the land to have community vegetable or produce plots. Weddle said any proposals would come first from the town's Parks Committee before consideration by him and town commissioners.

McNiesh added he was glad the commissioners and Weddle were able to find a solution to the site closing.

"I’m personally happy with all the work the burgess and commissioners put into it. … I think it was a team effort," McNiesh said.

Now that the yard waste drop-off site at Heritage Farm Park is closing, Walkersville is evaluating how much it would cost to run a curbside pi…

I'd used the Walkersville facility for 20+ years. Everyone I know assumed it was a place the residents of the north county could use. Walkersville has been given J&J to meet their needs. What about the rest of us outside Walkersville? The answer is to use the county landfill in south county, convenient to middle and south count; Frederick City, Mt. Airy, Middletown, Urbana and more. But most of us "up here" will have to drive 50-60+ miles round trip to get rid of our leaves and branches!? The County needs to step-up and do something for the residents for north county. We pay taxes and vote too! Finally, if the problem is commercial companies using the site, don't penalize the rest of us by closing it down, fix the problem for those of us that want and need this facility.

The Walkersville sure is closed down and entirely cleaned up.

But, I do agree with you.

Demosky has no ide what he’s talking about. Yes, it was intended to be regional. And that’s a fact. And thats what it was from the beginning.