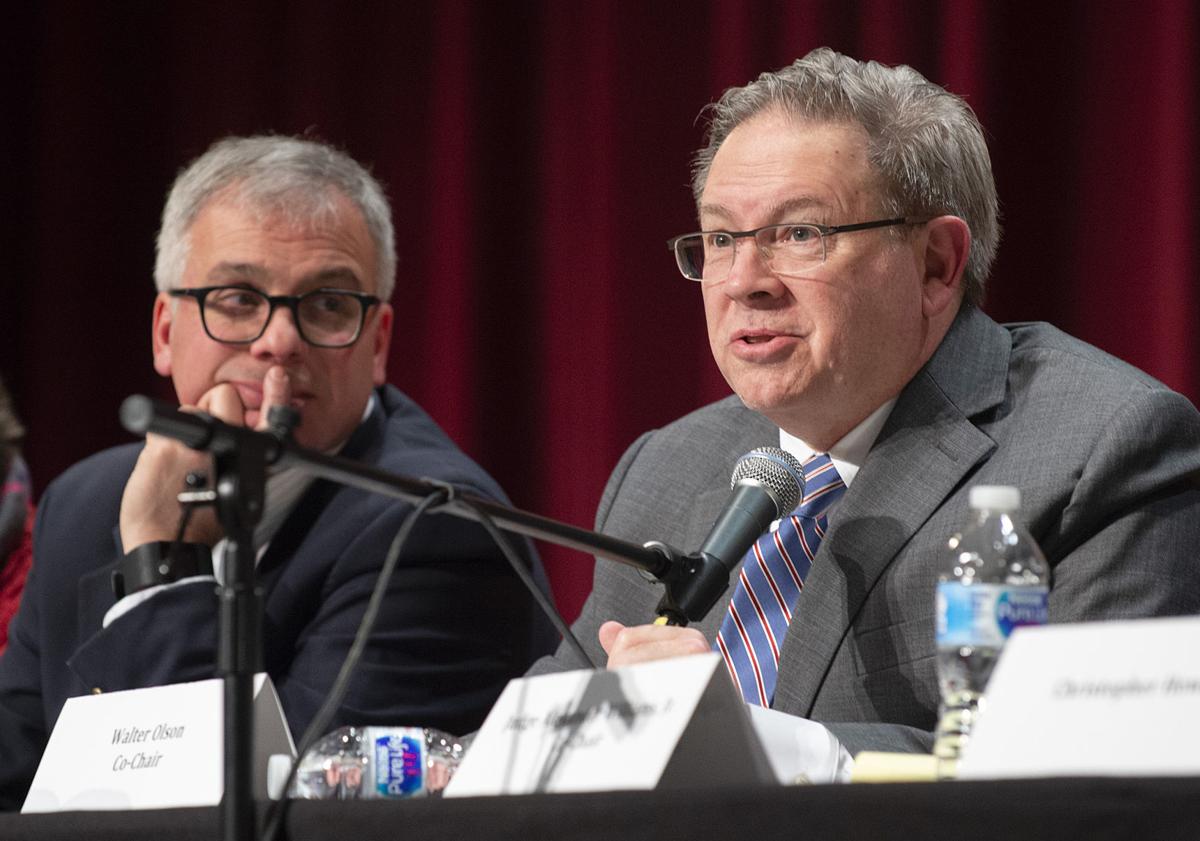 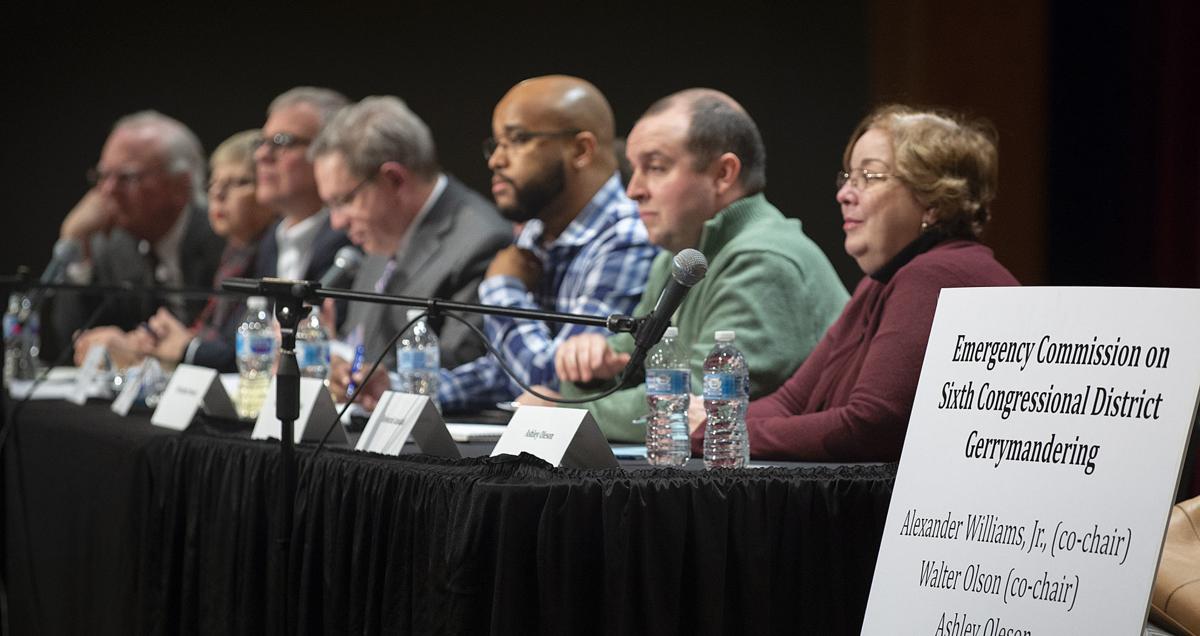 The Emergency Commission on Sixth Congressional District Gerrymandering hosted a meeting at Frederick Community College’s Jack B. Kussmaul Theater, where they heard recurring themes from those residents: fairness, and using computer algorithms to redraw the new district.

Gov. Larry Hogan appointed a Republican and a Democrat to co-chair the commission, along with an unaffiliated member. Six other commission members were chosen by the public, with equal representation given to the Democratic and Republican parties and unaffiliated residents.

The redrawing of the 6th District will also change the state’s 8th District and perhaps others.

Walter Olson, a registered Republican and senior fellow at the CATO Institute Center for Constitutional Studies who lives in New Market, is co-chair of the commission. When it comes to what makes a fair district, Olson said areas that are quantifiable need to be considered.

“You can count the number of times counties are split,” Olson said after the meeting. “It’s harder to count fairness in numbers, even though it’s there. I think if we provide the logical connection between communities ... people will find it easy what is fair, whereas a map that doesn’t have any internal logic to it ... is also not going to bring any fairness to the table, because it’s going to string together unlike communities just because they’re looking to elect someone.”

That latter idea was expressed by Eric Bouchat, a Carroll County commissioner who testified at Monday’s meeting.

Bouchat said that many residents of Frederick and Carroll counties, especially in rural areas, share qualities that should translate to better representation than what the current map dictates.

“We have been linked up with southern [parts of] Montgomery County as well as others in Frederick County, who I believe have suffered the same fate, that is nothing but an attempt to water down the rural representation that we should have in Congress,” he said.

Many others who testified in the hearing urged the commission to use computer models to redraw the district in order to increase fairness in elections.

That included Larry Hill, a Board of Elections member in Frederick County and is a cartographer who works for the federal government.

Hill said he planned to submit a map to the commission, and urged the commissioners to draw a map that is more compact and geographically fair, using unbiased computer programs.

One Frederick County resident who testified, Holly O’Shea, said it was important for commission to draw maps that allow people to remain actively engaged in the political process, and to choose to live where they want to, without worrying about gerrymandering.

“When the [congressional] lines were drawn in 2011, first of all, I had to figure out what district I was in,” O’Shea said. “That shouldn’t have to be that difficult, but it was, as you see the map.”

Moving ahead, the commission will hold two more public hearings in the district before completing a proposed map by March 4, Olson said. Then, more public comment will occur before April 2, when a final map will be submitted to the state Legislature.

That way, the General Assembly will have time to act on it before this year’s session ends, Olson added.

He said after the meeting that the commission will consider any submitted maps, but also urged residents to attend public meetings and offer their thoughts.

“When the public comment period closes, then we’ll know what is on the table, as it’s quite possible the best maps will arrive at the last minute,” Olson said. “In the meantime ... there are questions here tonight we’re going to have to face, which is how do we feel about fixes that affect District 8 and ones that don’t go beyond that, and ones that are more ambitious ... and have effects in distant parts of the state.”

Correction: An earlier version of this story incorrectly stated that Larry Hill is an election judge in Frederick County. He is a member of the Board of Elections.

One thing that seems to be missing here is a discussion on what is considered 'fair'. The issue of what the color of the voter is (red, blue, white, black, etc) and if the District is "balanced" (insert a multitude of definitions here) ultimately comes down to the fact that people are doing the selection of the boundaries and with information that is not really all that germane to the making of such a District.

Think for a moment what one is seeking: a compact District without regards to political or race. How about this radical idea. When working out a District, have the Board of Elections send the following information to the selection committee and nothing else. Just the address of the voters as little orange dots on a map. If all the troublesome data of party affiliation is gone, how can one gerrymander? If race information, age, etc is removed, how can one claim discrimination?

Better yet, a simple computer program will suffice. With the number of voters in a District needing to be X, make a common sense adjustment of X +/- a small percentage. People are turning 18, moving, or dying all the time so there is little sense in aiming for a precise X. Using the minimal data from the Board of Elections (voter address ONLY), start by examining County boundaries, large rivers and highways, and carve the State up into areas of, say, X/10 parcels to start. Avoid town and city boundaries and focus on natural ones instead. Starting at Western Maryland or Eastern Shore, add in parcels until you approach the desired X per District. The computer program can calculate the centroid of the ongoing voter population to help select the next parcel to be added in by distance. This keeps the District compact and helps in tiebreakers.

Finally, make the computer program public and hand out copies for Colleges and Universities to examine for any hidden hanky panky like internally labeling the parcels red or blue. Remember the key here is the removal of information from what he Board of Election has on file and staying strictly with the location of the voters.

Ridiculous! We have a Republican Governor that drew up a Republican plan with a Republican Chairman that has to pass legislation controlled by a heavily Democratic majority. The plan is dead on arrival.

I guess you missed the part where the makeup of the board was described previously Dick. 1/3 R, 1/D, and 1/3 I. How in the world is that a Republican plan? Certainly you believe in fairness Dick, don't you?

Can't get more nonpartisan than that!

The redistricting process should simply seek to follow as closely as possible existing political (county lines) and community boundaries (zip codes) in a compact manner.