Months after several Emmitsburg residents dealt with brown water in their homes, the town has determined several possible causes and started plans to invest in water lines and similar infrastructure.

Town Manager Cathy Willets said that some of those improvements have already begun, including adjusting a pressure reducing valve at Fraley and Annandale roads — the source of some clogging and bad filtration.

Some of the long-term fixes town officials are planning, Willets said, include replacing old water lines which may be corroding and leading to the discolored water, especially during high-flow times. Town staff also said that a new water clarifier is likely needed, which would be installed near the water treatment structure west of town on Crystal Fountain Road.

Those repairs, however, come at a hefty price tag. Replacement of each line ranges from $1.2 million to $1.5 million, and the clarifier project would be roughly $3.4 million, Willets said. Emmitsburg has 3,100 residents and a total budget of just under $1.9 million.

The town has tried to apply for grant money and other funds from the Maryland Department of the Environment (MDE), but MDE did not award any funding to Emmitsburg. Willets said their priorities did not score high enough on MDE’s ranking system to get any funding, and that officials are seeking USDA funding to pay for some of the bigger-ticket projects.

“This is going to be something we continue to evaluate,” Willets said of discolored and brown water issues. “We’ll keep plugging away at it ... we’re a small town with a small budget, so we rely on [outside] funding for projects like this.”

What caused the brown water?

Even roughly six months after several residents first complained to town officials about discolored and brown water, there isn’t a single cause officials have identified.

In January, Mike Marschner, a deputy chief administrative officer with the county, and others completed water samples around Emmitsburg. They then sent a letter to the town in late January, indicating the town’s water — even after running through the wastewater treatment plant — tested low for alkalinity and calcium hardness.

Marschner said last week that this, coupled with old piping underground, means corrosion and other similar issues can lead to discolored water entering people’s homes, especially when there are high-flow periods. 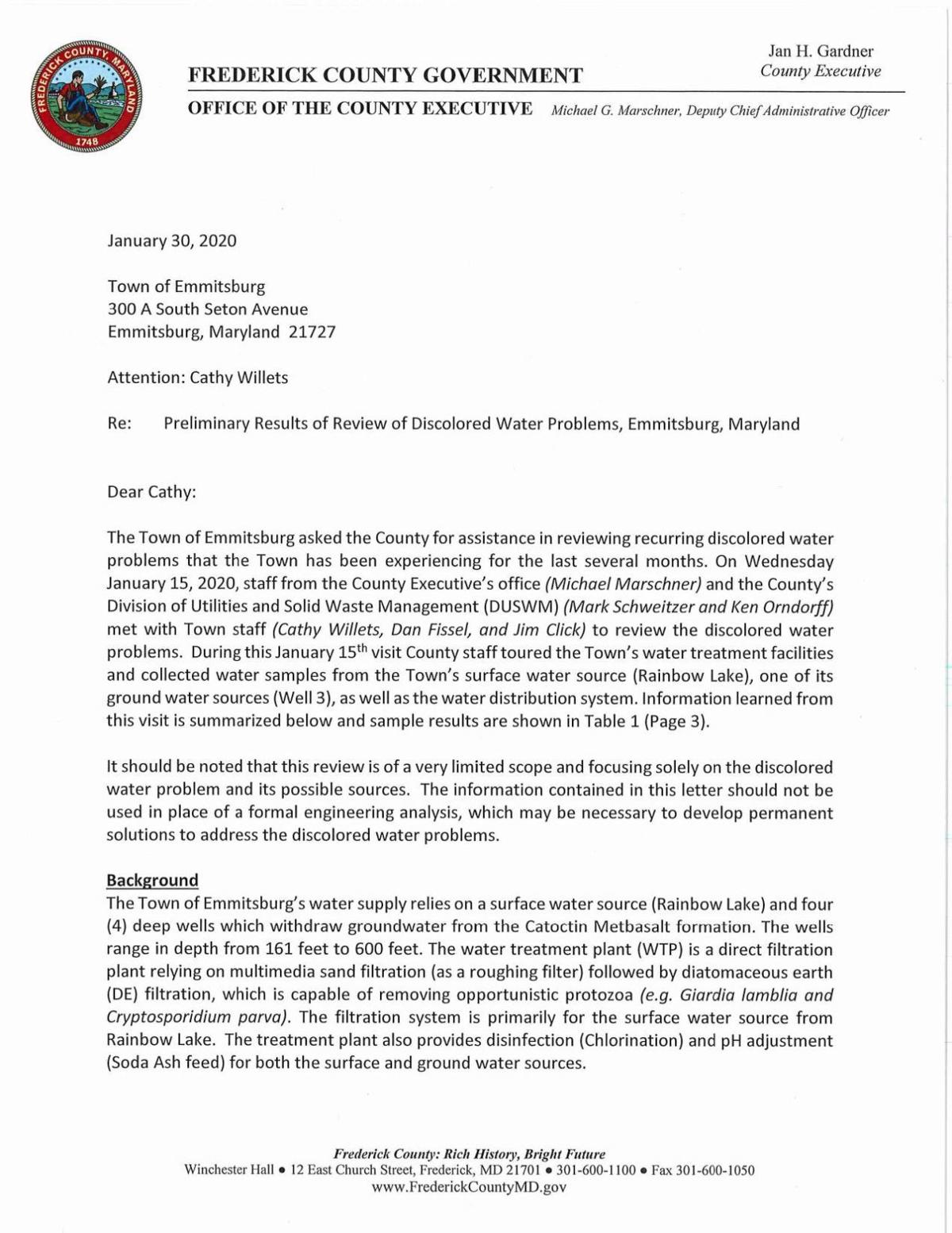 The letter also mentions tuberculation, which is when tubercles from old water pipes underground can blend into water as it’s passing through. The county’s letter indicates that when this occurs, officials should consider relining or replacing the piping.

There also was speculation among town residents about out-of-town contractors coming into town overnight late last year and illegally drawing a lot of water off of the town’s fire hydrants. Such action could stir up sediment in some of the town’s water lines.

Willets and Commissioner Tim O’Donnell said they had heard reports of that occurring, but had not independently verified them. O’Donnell and Willets both identified myriad issues: old pipes, high water usage, high water flow and tuberculation across town as some reasons for the brown water.

O’Donnell and other commissioners handed out bottled water to residents who were experiencing discolored water around Christmas time last year. He said that was important and shows how personal a relationship commissioners have with residents, and the issues they face.

“The bottom line is, we’re a very small community and when somebody has brown water … you’re going to have that conversation with a neighbor,” O’Donnell said.

“One gentleman came in and said, ‘I don’t envy you guys ... Now, I’m really upset because my water isn’t good right now,’” he added. “There’s a personal nature to what we’re doing, and I don’t think any of us lost sight of that.”

The town is currently applying for grants programs through the USDA in order to finance water improvement projects. Willets, O’Donnell and Mayor Don Briggs said the projects are a long-term plan in order to improve water quality in their town.

All three also said this past winter was probably the worst period of brown and discolored water for the last decade, if not longer.

In terms of funding, O’Donnell suggested a “last resort” is to work with commercial banks to finance infrastructure projects, and trying to negotiate good interest rates.

Marschner said it will be important for the town to produce “stable water” that isn’t as aggressive in iron or old piping, by either adding debuffering agents or increasing the pH.

The county’s letter also suggested Emmitsburg create a “water distribution system asset management system,” which would be a database of problem areas where tuberculation is occurring, possibly resulting in discolored water.

O’Donnell thanked the county for conducting the water samples and sending the letter. He understands residents were upset about the water issues, but noted many of the improvements needed are long-term goals.

“In order to make these repairs, it’s a long-term process and most people understand that,” he said. “But at the same time, if one sees discolored water, they want that fixed right away, and I get that.”

To read the entire letter from county officials to Emmitsburg officials about the water testing and recommendations to improve water quality, read the story online at fredericknewspost.com

About a month ago, Dennis Tokar started noticing an unpleasant sight flowing in the bathtub in his home on Main Street in Emmitsburg: brown water.