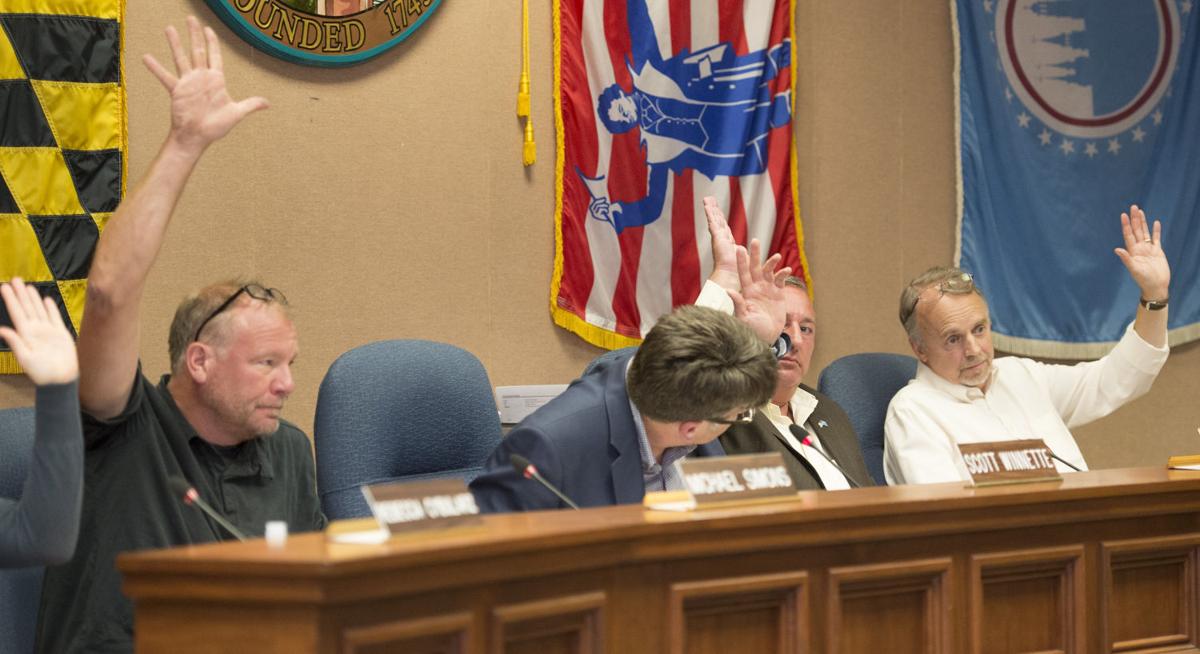 Members of the Historic Preservation Commission voted 6-1 on Thursday to approve the demolition of a log cabin on East Fifth Street in Frederick owned by Habitat for Humanity. 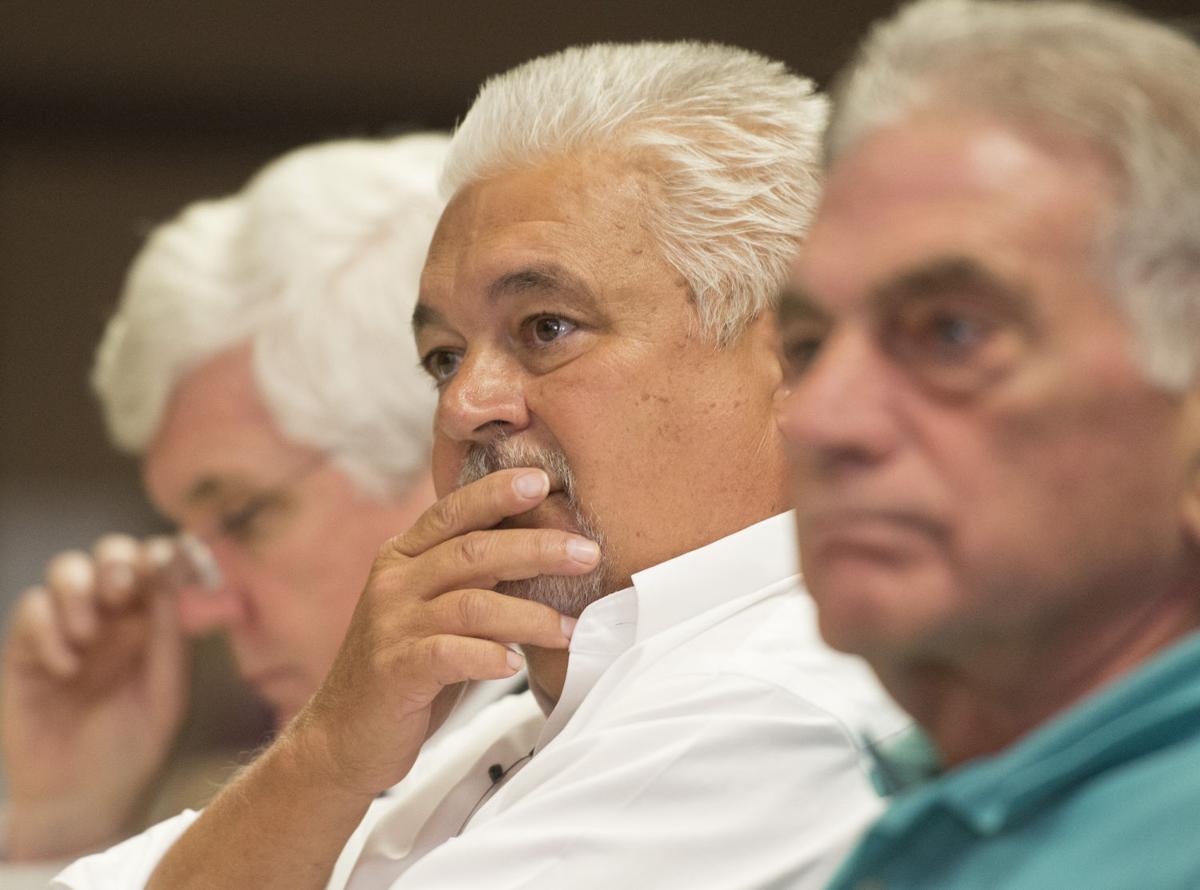 Ron Cramer, executive director of Habitat for Humanity of Frederick County, listens to a staff report Thursday at a Historic Preservation Commission meeting at City Hall. 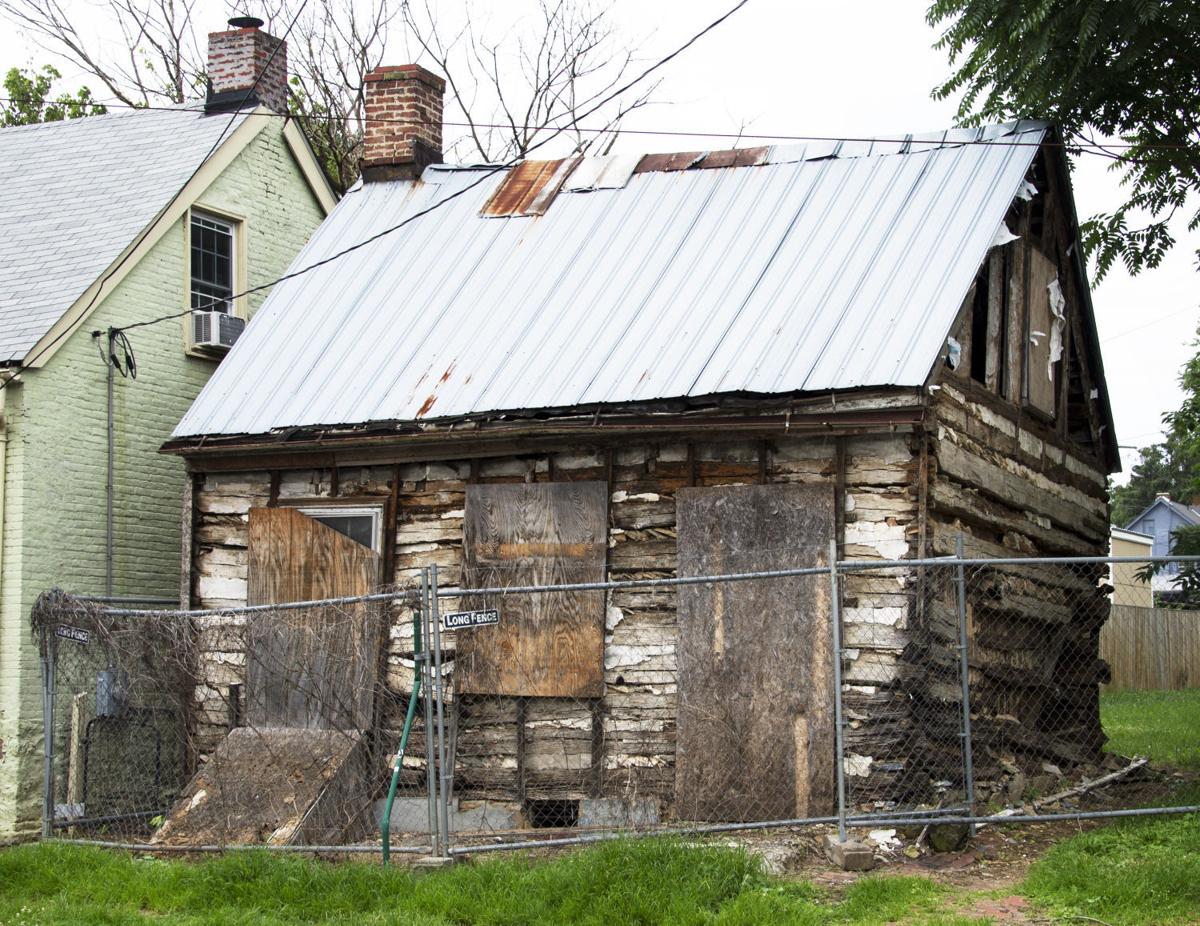 The cabin at 107 E. Fifth St. in Frederick is shown recently.

Members of the Historic Preservation Commission voted 6-1 on Thursday to approve the demolition of a log cabin on East Fifth Street in Frederick owned by Habitat for Humanity.

Ron Cramer, executive director of Habitat for Humanity of Frederick County, listens to a staff report Thursday at a Historic Preservation Commission meeting at City Hall.

The cabin at 107 E. Fifth St. in Frederick is shown recently.

The waiting game has ended for Habitat for Humanity of Frederick County, which will move forward after getting long-awaited permission to demolish the dilapidated log cabin on East Fifth Street.

The city’s Historic Preservation Commission handed down the decision Thursday before a crowd of Habitat staff, supporters and city residents. In contrast to the drawn-out, controversial nature of prior public hearings and discussions, the 6-1 vote came swiftly and with little debate.

The lack of fanfare didn’t dampen the success for Ron Cramer, Habitat’s executive director and one of many champions for the demolition request.

“I’m ecstatic,” he said in comments after the vote. “It’s a true relief.”

The financial burden and safety hazards posed by the 19th-century log cabin at 107 E. Fifth St. have weighed heavily on the nonprofit organization since it bought the property from the city in 2005. Deemed unsalvageable in multiple reports over the last 10 years, including an evaluation compiled by a private contractor a few months ago, Habitat sought to demolish the termite-ridden, crumbling remnants with the intent to sell the lot to a local builder.

Since the cabin is in Frederick Town Historic District, demolition required a two-vote approval from the HPC. The first vote on the property’s significance to the historic district was decided in a 3-2 vote earlier this month, with the majority voting to designate the cabin a contributing resource.

With a contributing designation, the commission could approve the cabin demolition only if evidence proved its current condition resulted from circumstances beyond neglect by the owner, as required in the city’s historic preservation guidelines.

Danny O’Connor, a member of Habitat’s board of directors and a former Frederick County Circuit Court judge, pointed to photos and documents that he said proved the cabin’s state of neglect before the nonprofit purchased it.

The cabin does not meet the definition of demolition by neglect under the city’s guidelines, O’Connor said, because the building needed more than routine maintenance when it came into Habitat’s hands. The severity of the situation prompted the city to condemn the building well before Habitat’s 2005 purchase, according to O’Connor.

“There were literally holes in the building,” he said.

Carrie Albee, the sole commission member to vote against the demolition, said it was irrelevant which owner was to blame for neglect that led to the property’s demise. The dilapidated, unsalvageable state reflected a comprehensive failure on the part of various property owners, city code enforcement officers and others, according to Albee.

“The thing that bothers me most about your application is your willingness to completely pass the buck to the previous owners,” agreed member Dan Lawton, although he voted for the demolition.

Albee also highlighted the long delay between when Habitat bought the property and submitted the demolition request.

“It would have been nice to hear from you guys five or 10 years ago,” she said.

Member Michael Simons called it disturbing that the organization didn’t request demolition sooner, given its reports and photos dating back to documenting the property’s safety hazards.

Still, the majority of commission members agreed Habitat was not solely responsible for the neglect and the demolition was in the best interests of the community. Requirements of the approval included documenting the structure for archival records, allowing a six-month archaeological survey period before the property can be sold or redeveloped and that demolition be done by hand without heavy equipment use.

Several residents, historians and Habitat volunteers have pledged to help take down the structure and document the remaining architectural elements. At the end of the six-month study period, Habitat will sell the empty lot to builder Ron Hemby, The News-Post previously reported.

Cramer, O’Connor and the rest of the Habitat staff, meanwhile, will return to the work the nonprofit organization was created to accomplish.

“Now, I can go back to building houses,” Cramer said.

Editor’s Note: This story has been updated to reflect a correction in the information box concerning the time of the meeting that will determi…

Commissioner Carrie Albee’s statement that she’d rather see Habitat’s rotten, termite infested hulk of a log cabin just stay sitting there on East 5th St and slowly turn to dust is typical of historic preservation extremists to whom the City has ceded way too much power. These unelected and unaccountable officials have little regard for the huge costs they impose on citizens and businesses. And to no good purpose. They constantly frustrate homeowners and builders wanting to preserve and improve their buildings. Frederick’s downtown is a diverse and lively place because it developed before busybodies like this took it on themselves to supervise every detail of other people’s buildings. Peter Samuel

[thumbup]to me the whole historic district is made for busy bodies who have nothing better to do than worry about other peoples homes.its way past time to rid Frederick of these asinine ideas

Albee should have to be made to pay the taxes on that property and be liable for any injuries anyone may sustain there until the cabin is demolished and the lot is bare.

The historic district was in decline in the seventies headed toward "anything goes," so while I am not fond of copious rules I think more and more it attracts people who are. Who fit. Less room for misunderstandings than earlier. Anyway we have to thank those who ransomed the city long ago for what there is. Other cities burned.

Well it's about time. The HPC has finally shown a shred of common sense in spite of that Albee person's continued ignorant and unreasonable approach to the matter. I doubt if much of that structure is even good enough for firewood after all the damage the termites have done. Best that it be gone as soon as possible.

Termites streaming out of wood just thrown on a fire is the stuff of nightmares.

At least have some archeologists dig through the floor once it's safe to.

The whole lot.
Outhouses were yesterday's dump. Might be broken crockery and such that give insight into earlier lifestyles.