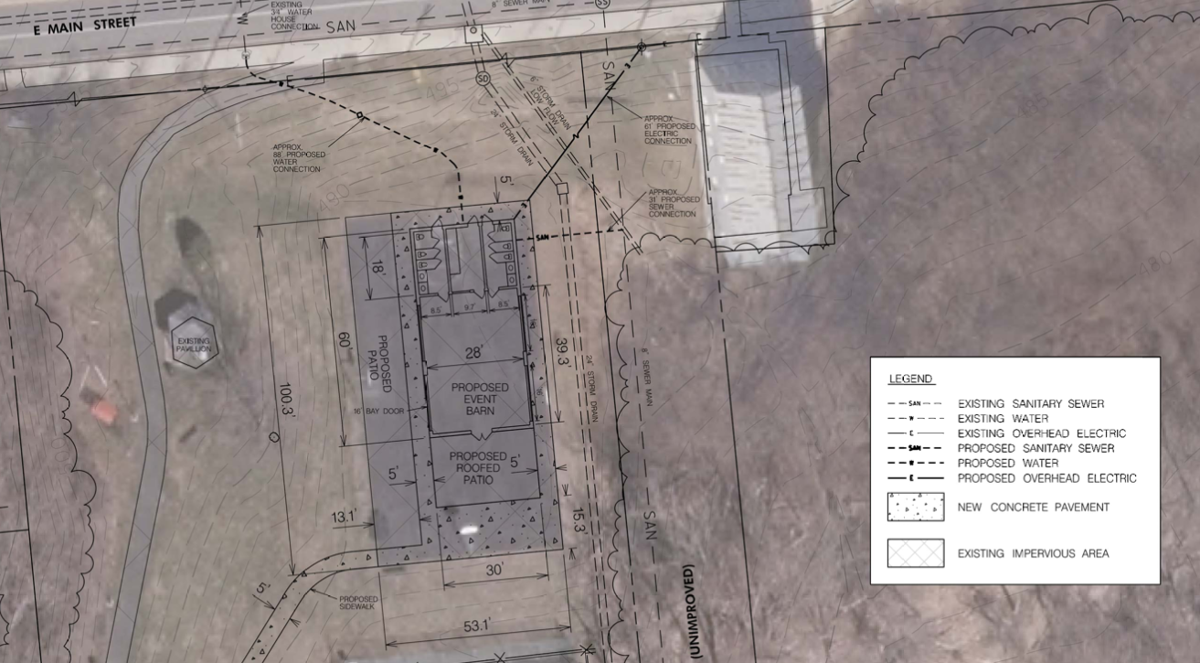 The Town of New Market plans to build a partially enclosed pavilion to be used as a year-round event space at the community park. A concept plan by engineering firm Wilson T. Ballard Co. is pictured. The site plan needs to be submitted to the planning and zoning commission before the project moves forward.

The Town of New Market plans to build a partially enclosed pavilion to be used as a year-round event space at the community park. A concept plan by engineering firm Wilson T. Ballard Co. is pictured. The site plan needs to be submitted to the planning and zoning commission before the project moves forward.

The town of New Market moved one step closer to making an event barn at the community park possible.

During its Town Council meeting on Thursday, engineer Tim Rye presented a concept sketch for an event barn to the mayor and town council for consideration. The proposal suggests placing the barn where an existing basketball court sits, on the side closest to East Main Street.

The concept plan depicts a partially enclosed pavilion approximately 30 feet by 80 feet, of which 30 feet by 60 feet would be enclosed. The preliminary design includes space for a patio, bathrooms and kitchen, plus large garage doors. Rye estimated the building could hold 220 people at standing capacity or 157 people with chairs or 73 people with tables and chairs.

Rye presented the concept sketch Thursday to get feedback from the mayor and council before bringing a site plan to the planning and zoning commission. The mayor and council members reacted positively to the design. Council Vice President Shane Rossman suggested dedicating the barn to a person of significance to the town.

Rye is hopeful the plans can be to the planning commission by October.

The mayor and council members discussed at length repairs to sidewalks at 12 and 78 West Main St. Engineer Shawn Burnett said 12 West Main needs a drain plate system, while 78 West Main has a damaged concrete paver base. Council members voiced concern over the availability of materials.

Mayor Winslow Burhans III suggested the town engineer solicit cost proposals and come back to the council with more information.

Scott Patano of the Rotary Club of New Market presented the club’s plan to install three flag poles outside the town hall. Rotary is covering most of the cost, asking the town to provide night-time lighting for the flags. Patano proposed installing one 30-foot pole for the United States flag and two 25-foot poles for the Maryland and town of New Market flags. A Rotary Club member will provide landscaping services.

A piece of artwork sits on the town’s lawn where the flag poles would likely be installed, but Burhans recalled the artwork was to be moved at some point, though he wasn’t sure when.

Councilman Dennis Kimble planned to look into lighting costs. The mayor and council will revisit the flag pole project next month.

In other business, council:

I drove through New Market just yesterday, except I could have sworn it was Gaithersburg. Congratulations Winnie Burhans, your dream has come true.