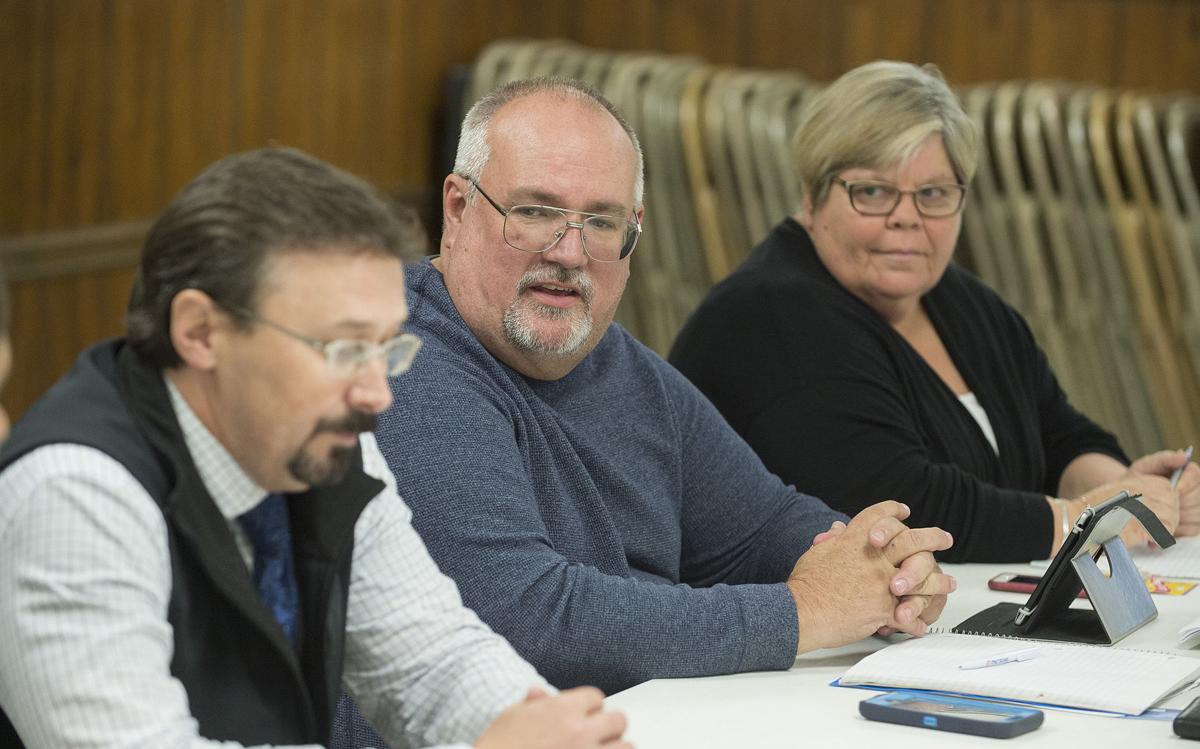 Ed and Karen Schildt, of Thurmont, have been conducting awareness events since losing their son to a heroin overdose in June 2016. They were joined by Shannon Garrett, left, and others at a roundtable Thursday in Thurmont. 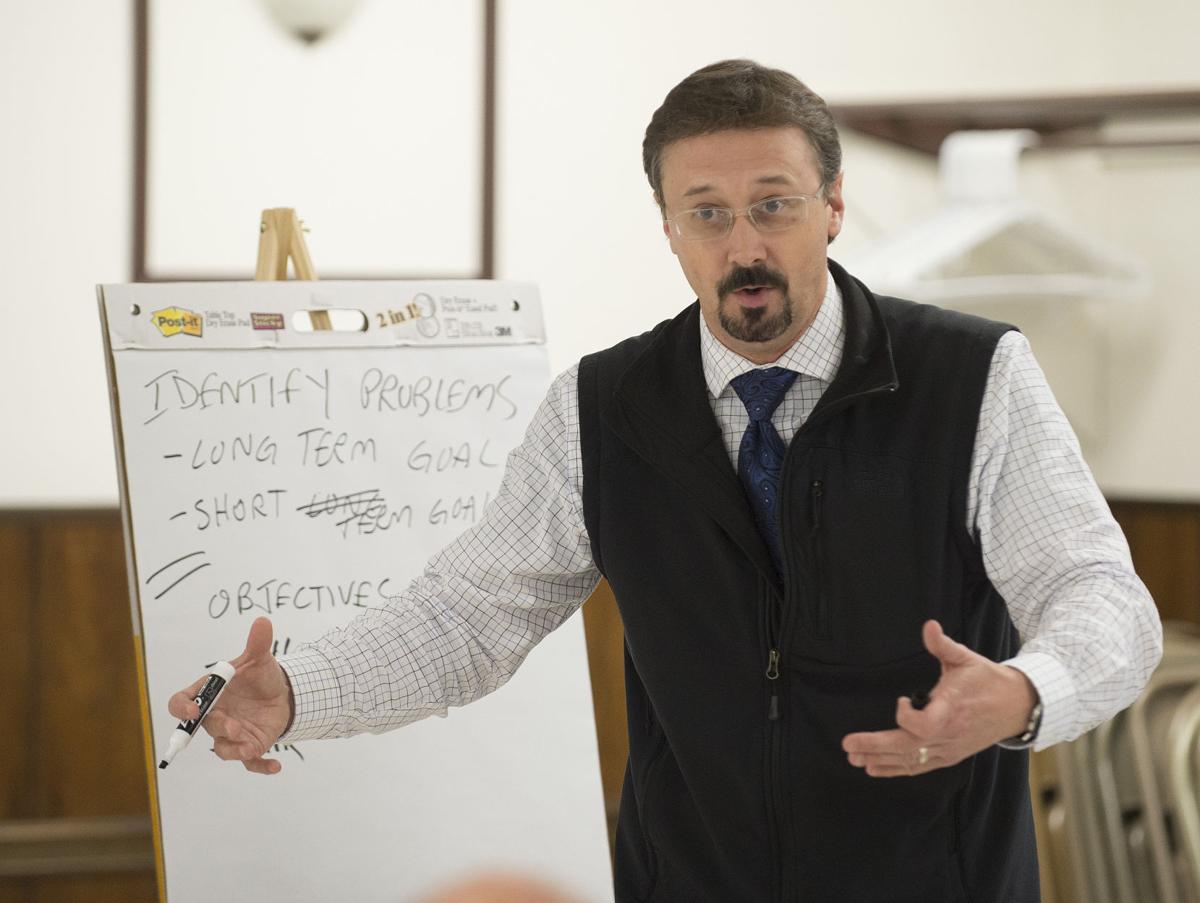 Ed and Karen Schildt, of Thurmont, have been conducting awareness events since losing their son to a heroin overdose in June 2016. They were joined by Shannon Garrett, left, and others at a roundtable Thursday in Thurmont.

Parents and elected officials in Thurmont are teaming up to figure out how to save lives.

In the first four months of 2017, the Thurmont Police Department responded to seven non-fatal overdoses and one overdose death. That already puts Thurmont at the halfway mark for the total number of overdoses and deaths that its police force responded to in all of 2016.

Thurmont Commissioner Martin Burns sat in the front row of the Guardian Hose Company’s hall Thursday night with roughly 25 people around him. Four weeks earlier, approximately 250 people had gathered up the road at Catoctin High School for a stage production — An Introduction to the Enemy — that put the power of addiction in the room.

Karen and Ed Schildt, who lost their son Chris to a heroin overdose in June 2016 after years of treatment and relapses, hosted both events.

The point of Thursday’s roundtable was to continue to educate and discuss what the community can do to help addicts and prevent people from becoming addicts, Karen Schildt said.

Commissioners Bill Buehrer, Wes Hamrick and Burns were there to listen.

“You’ve got three elected locals in the room, and I want to do something that does something,” Burns said. “I don’t want to talk about it.”

Burns committed to asking the mayor and Board of Commissioners on May 23 to begin an addiction commission to address heroin overdoses and deaths in Thurmont.

“Everybody talks about Governor Hogan. ... Everybody’s talking about the county — I don’t care about that,” Burns said. “I care about Thurmont, and what we can do to make a difference here now.”

Addiction education for families and children continues to be a problem in Thurmont as the stigma surrounding drug use lingers.

Community members agreed to contact local churches and invite kids to the next meeting on June 8 to start figuring out ways to keep kids active and away from drugs.

“Everything is surrounded by drugs and alcohol,” said Terry Austin, owner of Austin Addiction and Mental Health Center in downtown Frederick where the Schildts hold a support group. “In your community, get a place together where they can have a game night, where they can enjoy life a little.”

People in recovery from addiction need safe spaces, too. Some bowling alleys and pool halls serve alcohol, she said. Recovering addicts need places where they can socialize without the risk of relapsing.

“They made bad decisions, but they’re good people,” Austin said.

Diane Daniels, a Thurmont resident and friend of the Schildts, volunteered to contact the Thurmont Ministerium to find out if there are spaces that could be used to sponsor activities for kids and recovering addicts.

Daniels, a member of Graceham Moravian Church, has already had initial conversations with her pastor, she said.

“My vision with this event is a blueprint, if you will, for other communities to possibly take the same kind of action to work together, activate more people in areas of their expertise to help address the issues of concerns of addiction and recovery,” Ed Schildt said.

One of the main problems attendees identified was that the information about treatment, rehabilitation, local support groups and advocacy agencies is scattered across the internet. Robert Hagans, part of the Schildts’ extended family, volunteered to begin compiling Thurmont’s information.

He and his wife, Micha Hagans, who is a program specialist at Frederick County Workforce Services, have three teenagers. Chris Schildt’s death affected the whole family, and the family has come together to help prevent the same loss for another family, Robert Hagans said.

“They’re starting to wake up, because there’s so many people losing children and grandchildren,” Freeze said.

Freeze was unaware that Mackenzie was using heroin, but knew she was using something, prior to her death, she said.

There is still a stigma attached to addiction, which can be a barrier to families getting help and becoming personally educated about addiction, Lisa Nolan-Humerick said.

The Schildts’ two sons and the Humericks’ son attended school and played sports together before Chris Schildt’s addiction and death, Nolan-Humerick said.

“It was shocking,” Nolan-Humerick said. “Chris was the all-American kid.”

The hope is that by coming together, Thurmont can catch up on the epidemic.

Shannon Garrett is a licensed social worker and clinical alcohol and drug counselor. He spent 22 years working in a treatment center in Baltimore and is a recovering addict.

Garrett has worked with the Schildts. He pushed the group to commit to specific tasks to complete before the next meeting.

“If you’re going to get it done, you have to work through a process, which I really hope this community will do,” Garrett said.

After losing their son to opioids, couple wants to help others ward off addiction

This is so sad. The drugs have got to go. We have to get them out. We all know (remember) the lure for the teenager of the "forbidden activity". For us it was smoking or drinking beer... or staying out after curfew. Now it's heroin and morphine pills. I can't imagine how to get rid of them, and I applaud the people who are trying so hard to create "safe activities" for teens. And I know the police and other groups are working hard to get the drugs out. But in a society that is almost ready to legalize pot, I'm afraid they have an uphill climb. I believe that pot IS a gateway drug and that the push to legalize it is a bad idea. My deep condolences to the Schildt family. God bless you for using your son's passing to try to solve this problem and prevent more deaths.