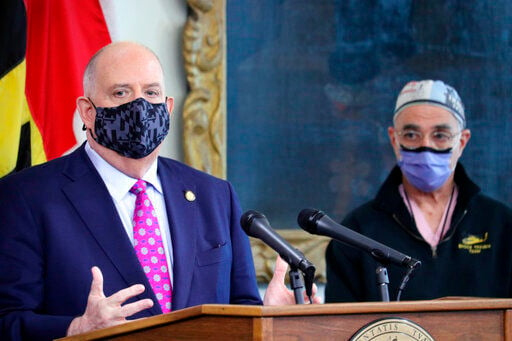 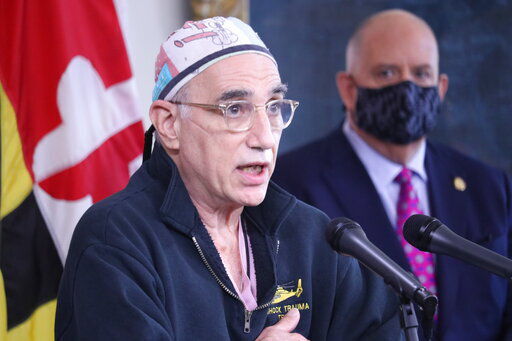 Dr. Thomas Scalea, physician in chief of the R Adams Cowley Shock Trauma Center, speaks with Gov. Larry Hogan on steps taken to battle the coronavirus during a news conference on Tuesday, Nov. 17, 2020 in Annapolis, Md.

Dr. Thomas Scalea, physician in chief of the R Adams Cowley Shock Trauma Center, speaks with Gov. Larry Hogan on steps taken to battle the coronavirus during a news conference on Tuesday, Nov. 17, 2020 in Annapolis, Md.

Gov. Larry Hogan on Tuesday announced limits to operating hours for restaurants and bars and reduced indoor capacity from 75 to 50 percent for retail businesses in an attempt to curb further spread of the coronavirus.

The changes go into effect at 5 p.m. Friday. Bars, restaurants, nightclubs and similar businesses must close between 10 p.m. and 6 a.m., he said.

Takeout and delivery are encouraged at those establishments, Hogan said. The capacity reduction to 50 percent includes, but is not limited to, retail shops, religious facilities, personal services, bingo halls, bowling alleys and fitness centers.

Hogan made the announcement as Maryland reported 2,149 new cases of COVID-19 and 26 additional deaths on Tuesday. There are now more than 1,000 people hospitalized across the state, including 255 in intensive care, because of the virus.

At multiple points during the Tuesday afternoon press conference, the governor called on all Marylanders to treat the virus seriously. He appeared upset that many people statewide refuse to accept the severity of the pandemic.

"Regardless of all the disinformation that's being spread all over social media, this is not the flu," Hogan said. "It's not fake news. It's not going to magically disappear just because we're all tired of it and we want our normal lives back."

Hogan was joined Tuesday by Dr. Tom Scalea, who described how Maryland hospitals are going to handle a possible second surge and increased capacity demands due to a growing number of cases.

Scalea, who is physician-in-chief of the University of Maryland Shock Trauma Center, delivered his remarks in scrubs as he has just finished work in an operating room before arriving at the State House.

"I've been doing this for a long time and I don't remember learning this much about a single disease over such a short period of time ... That doesn't mean that everybody lives though. It means we're a lot better. We [have] a bunch more weapons," Scalea said.

One of the other issues the governor noted Tuesday is half or more of people who are contacted as part of the state's contact tracing efforts refuse to provide information. That response is troubling, Hogan said.

"This is not big brother," Hogan said. "We're not trying to track you. We're trying to stop the virus and stop you from infecting people you come in contact with."

Hogan said in order to avoid more hospitalizations and deaths because of the coronavirus, Marylanders must follow public health protocols like wearing a mask and social distancing.

"It does not matter how well we have done for all these months," Hogan said. "If we falter now, and if we fail to take this seriously ... this deadly virus will strengthen its grip on our state and our nation."

“I also share a plea to our residents to do their part and wear their face masks, physical distance and wash their hands,” Gardner said in a statement to the News-Post. “We are entering a very critical and dangerous time at the beginning of a rapidly increasing surge of cases and we need decisive action now to try to get in front of it. Today, in Frederick ...  hospitalizations are up to 30 beds compared to eight beds a month ago. While none of us want to see actions to restrict our economy, I appreciate and support the governor’s decisions today to add limitations to confront the spread of the virus.”

Im a Hogan supporter, but he can stand up at his pressers and preach all he wants about these orders will be enforced and people will be charged but the simple reality is they arent. There have been articles in the FNP with quotes from department leaders within this county that said they rarely take enforcement action and treat it as an educational moment. At this point in time if you claim to be unaware of any order or new restriction your flat out lying. It will take actual enforcement of the measures the governor is attempting or the people of this State will continue to laugh in his face and go about their everyday lives until this virus directly affects them or their family.

The number of people who care so little for others is sometimes depressing. I have generally been impressed at how many people are masked up in the grocery store and Lowes; about the only two places I visit!

Same here, shiftless, I can't recall the last time I saw someone inside a retail establishment without a mask. My usuals are Giant, Costco, and Home Depot.

There is a line from "A Christmas Carol" that I recall during times and situations like these "If they would rather die, let them do so and decrease the surplus population"

Mask up and wash your hands. It's that easy.

Government Can shut down all businesses they want, but if you don’t do a better job informing, educating and enforcing health precautions, not sure shutting down business is the total solution. This problem with increased cases began a long time ago with mass campaign gatherings & civil protest resulted with people not wearing mask or social distancing. Amazing now is the time after the elections politicians are wanting to take action.

Wife & I are retired and we limit our visits from home, but each time we go out for necessities we become frustrated seeing people not wearing mask inside businesses, under their noses or chins and not social distancing in close quarters. People have become complacent and/or just don’t care leaving the end results to chance. Unfortunately, the most vulnerable will suffer with illness or worse, die.

Frayou, I'm not seeing that when I'm out for supplies, but it could be a time of day issue since I try to do my retail during the sweet spot of between 9 and 11 in the mornings on weekdays.

I wouldn't get anymore frustrated by people not wearing a mask anymore than I do with people who don't wear a seatbelt, a helmet when riding a motorcycle, or a PFD when boating since I have no control over their actions. "If they would rather die, let them do so and decrease the surplus population"

Would those be the "mostly peaceful" protestors like Antifa who were wearing masks long before Covid in order to conceal their identity?

This is correct. I still run into people who think that it's ok for them to not wear masks because they're not afraid of being affected. They don't understand, or want to understand, that we wear a mast for other people ... not for ourselves.

Larry's about 3 weeks behind the curve and playing catch up.

Larry is running for President in 2024.

You are correct Jim. But Hogan is a Real Republican not a Trump Republican. The Republican Party has gone so far Right and has taken the unEducated and the deplorable’s with them. Trump figured that out and exploited them for PERSONAL gain. He actually detests them for being “suckers”. The shocking, depressing, thing is that there are so many of them. America isn’t the “one for all, all for one” Republic most of us thought it was. But it can be, with a little help from the 40%.