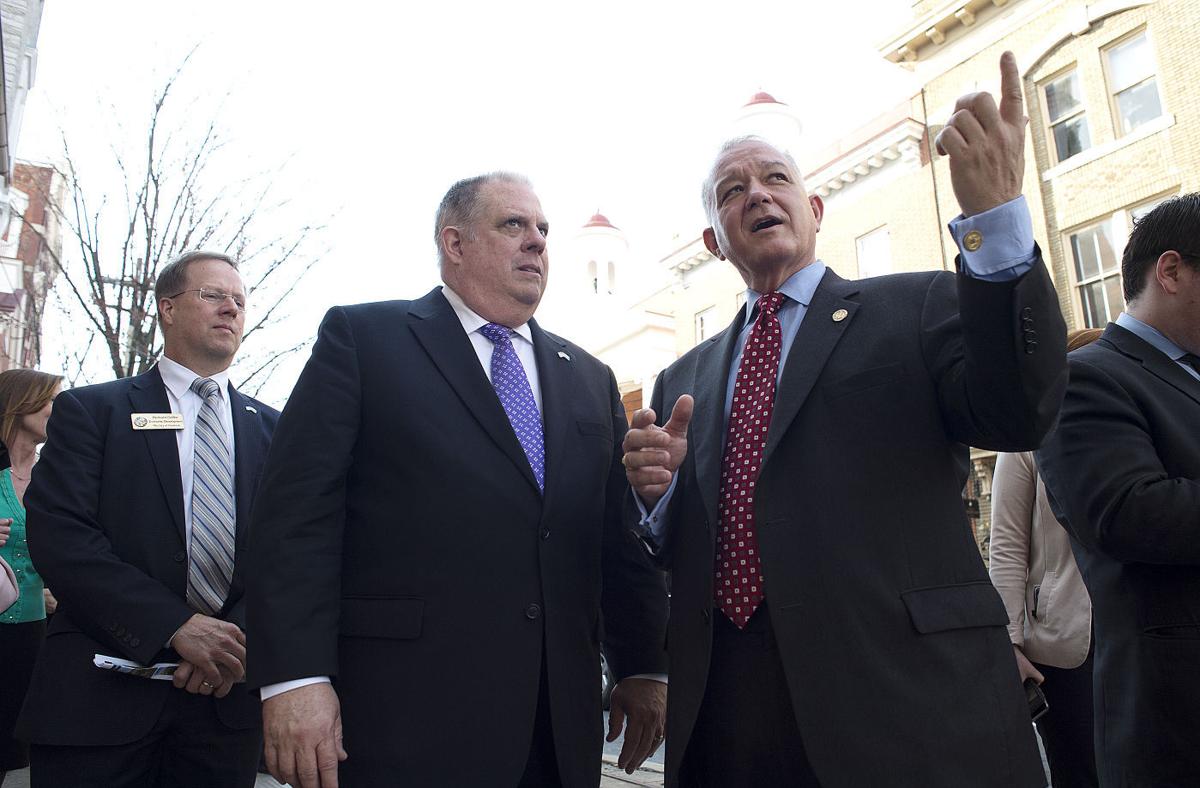 David Brinkley, right, secretary of budget and management and a former state senator who represented Frederick County, takes Gov. Larry Hogan on a walking tour of downtown Frederick on Wednesday. 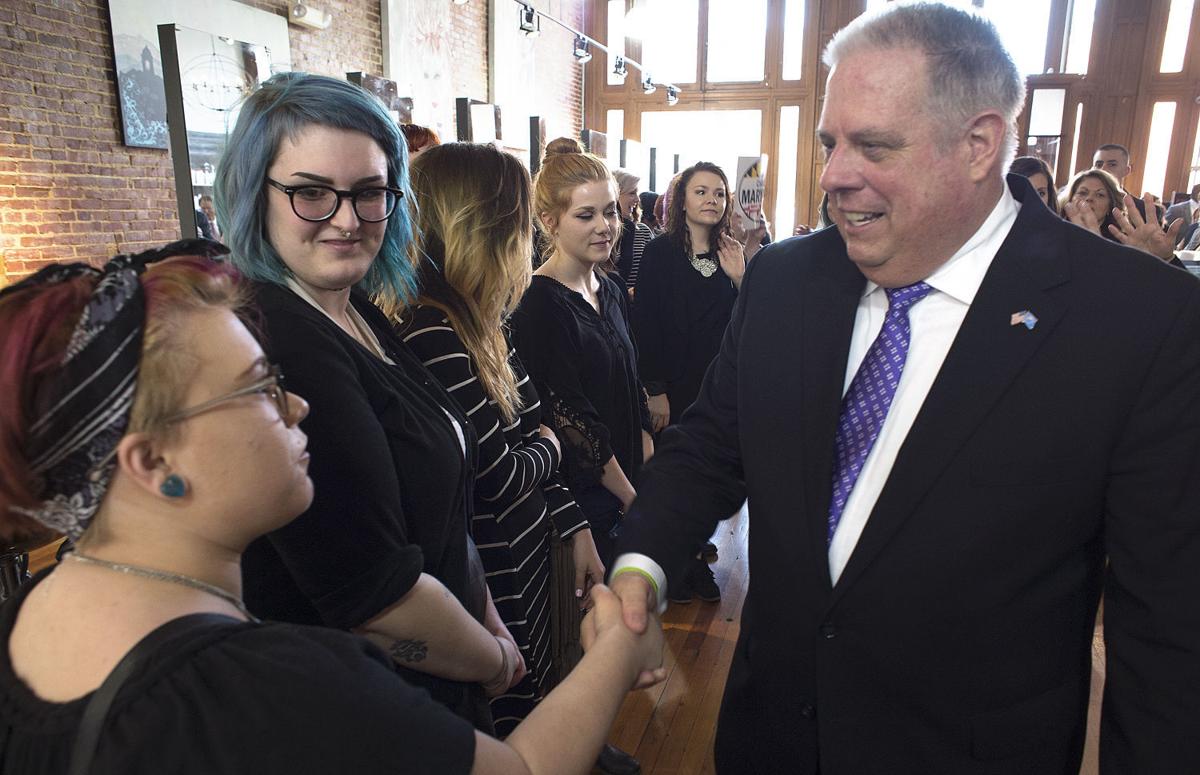 From left, students Kayla Wells and Clove Roses meet Gov. Larry Hogan in The Temple: A Paul Mitchell Partner School on Wednesday during the governor’s walking tour of downtown Frederick. 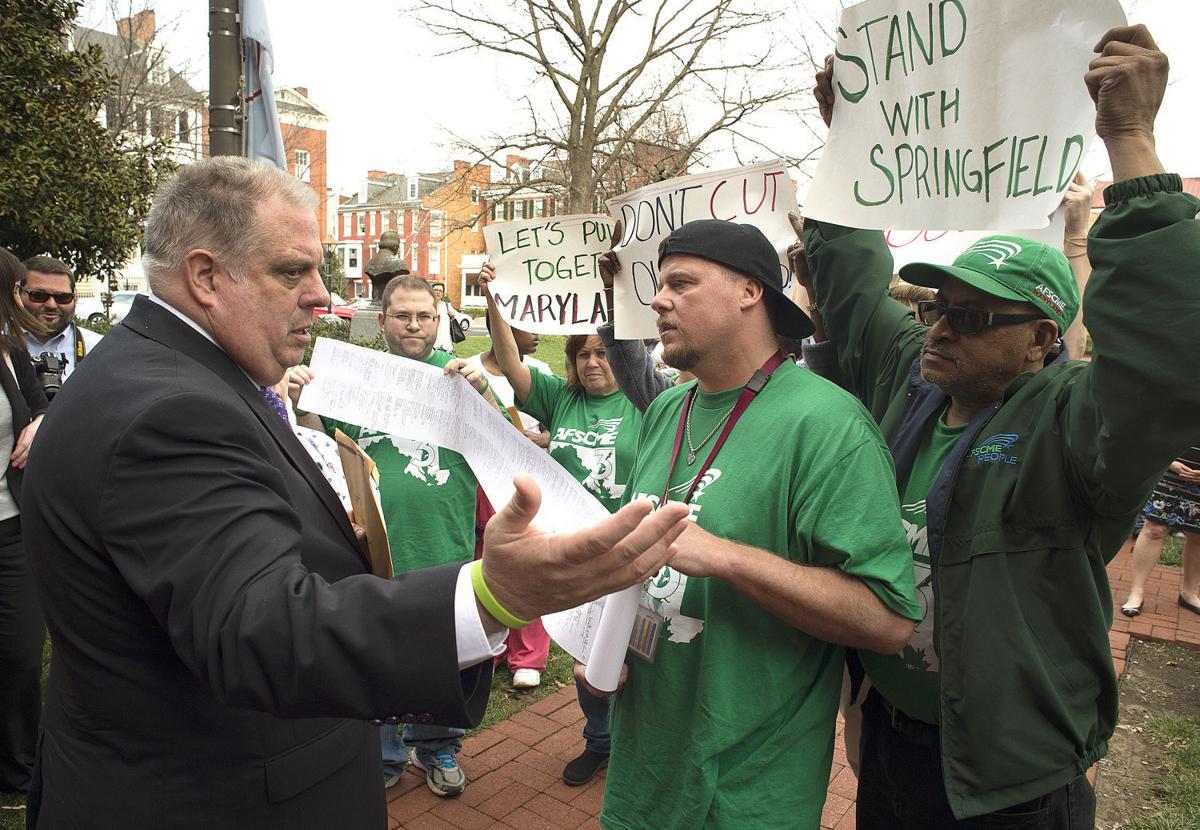 Springfield hospital employee Frederick Foote, center, holds one end of a petition Wednesday while talking to Gov. Larry Hogan about hospital workers who face layoffs. The group presented the Hogan with the petition signed by more than 600 people while he was on a walking tour of downtown Frederick.

David Brinkley, right, secretary of budget and management and a former state senator who represented Frederick County, takes Gov. Larry Hogan on a walking tour of downtown Frederick on Wednesday.

From left, students Kayla Wells and Clove Roses meet Gov. Larry Hogan in The Temple: A Paul Mitchell Partner School on Wednesday during the governor’s walking tour of downtown Frederick.

Springfield hospital employee Frederick Foote, center, holds one end of a petition Wednesday while talking to Gov. Larry Hogan about hospital workers who face layoffs. The group presented the Hogan with the petition signed by more than 600 people while he was on a walking tour of downtown Frederick.

Gov. Larry Hogan spent most of Wednesday in Frederick County, meeting with owners of small businesses, sampling beer, announcing state transportation funding for the county and visiting a cosmetology school.

Along the way, Hogan made frequent references to statistics on job creation, economic growth and public opinion as evidence of his administration’s success. The last year has been the best for business in Maryland in eight years, Hogan said.

Small-business owners he spoke to at Baltimore Coffee & Tea Co. highlighted changes made to create a more business-friendly environment.

Among them was Stanley Constantine, owner of the coffee shop on Presidents Court. Sitting across the table from Hogan, Constantine said he’d previously considered relocating his business.

“It’s heartbreaking to want to leave a place you love and have spent your whole life in ... because of the administration,” he said, referring to Hogan’s Democratic predecessor, Martin O’Malley.

“It’s given me hope to keep pushing and not give up,” she said. “I trust him.”

Close to 60 workers are expected to be laid off from the Sykesville hospital as part of efforts to privatize the institution, The Baltimore Sun has reported. A dozen of them gathered outside Frederick City Hall on Wednesday with signs and petitions bearing 600 signatures asking Hogan not to cut their jobs.

“Our patients need us,” said Debbie Zeitler, who has worked in the hospital food services department for 13 years.

But if the throngs of local and state officials, community leaders, business owners and local residents who congregated around Hogan throughout the day were any indication, he had many supporters.

Richard Griffin, the city’s director of economic development, said he had never seen such a large turnout in prior gubernatorial visits to Frederick.

“This governor seems to be very popular,” he said.

Noticeably absent from the walk through downtown was a tour of the site of the proposed downtown hotel and conference center at 200 and 212 E. Patrick St. Griffin and Hogan only briefly discussed the project, which requires state funding in the form of a $14.8 million bond to the Maryland Stadium Authority.

Asked if he would include the requested funding in his fiscal 2017 budget, Hogan said he will “give it every consideration” if the bill passes muster among state legislators.

Hogan’s visit to Frederick was not all business, however. He shook the hands of hospital leaders and cancer survivors at the groundbreaking of the James M. Stockman Cancer Institute.

Before taking the podium at Solarex Court to talk about transportation projects, he encountered a woman who said she was diagnosed with cancer. The woman said she drove from Cascade to see the governor, who last year had a form of cancer, non-Hodgkin lymphoma. His cancer is now in remission.

Upon seeing the lack of hair under the woman’s wool hat, Hogan told her to stay strong and that he’d pray for her.

In response to a reporter’s question, Hogan said is not supporting a presidential candidate. He endorsed New Jersey Gov. Chris Christie for president last year. Since Christie left the race and threw his support to GOP front-runner and businessman Donald Trump, many wondered if Hogan would do the same.

On Wednesday, Hogan said he is “not really focused too much on presidential politics. I’m staying focused on Maryland.”

Hogan would not say if he would support Trump as the Republican nominee.

Bridges on I-270 and Md. 180 will be built as part of more than $160 million in specific road and bridge improvements funded by the state, Gov…

Thank you, Gov. Hogan for taking some time out of your busy day to stop at Community Living. That is very much appreciated.

a breath of fresh air replacing the stench of omalley

Much rather have Hogan trumpet his successes here than O'Malley trumpet his latest tax increases. So refreshing.

Hiking boots and gloves are very beneficent and important for adventures and we can not enjoy hiking well without these things like we can not write bestessay without writing tools so if there anyone want to enjoy his holidays by hiking, they should try to get tool first and that are boots and gloves.