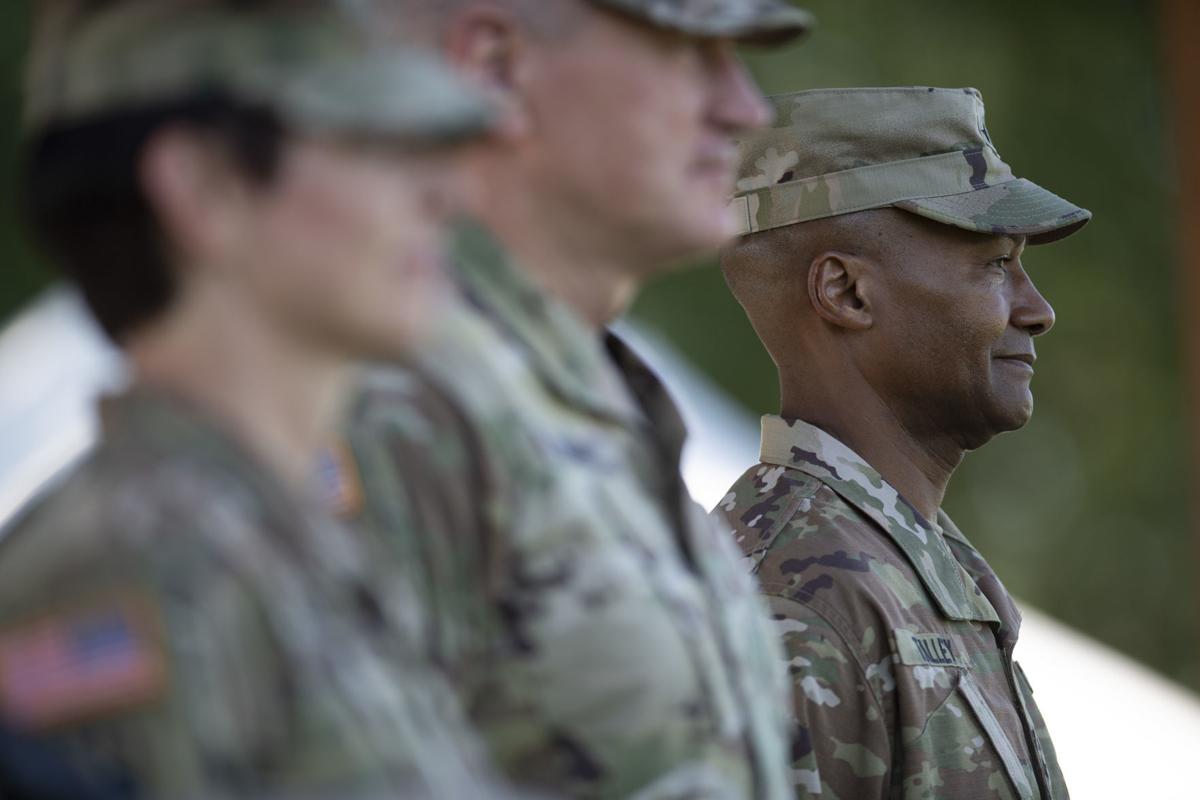 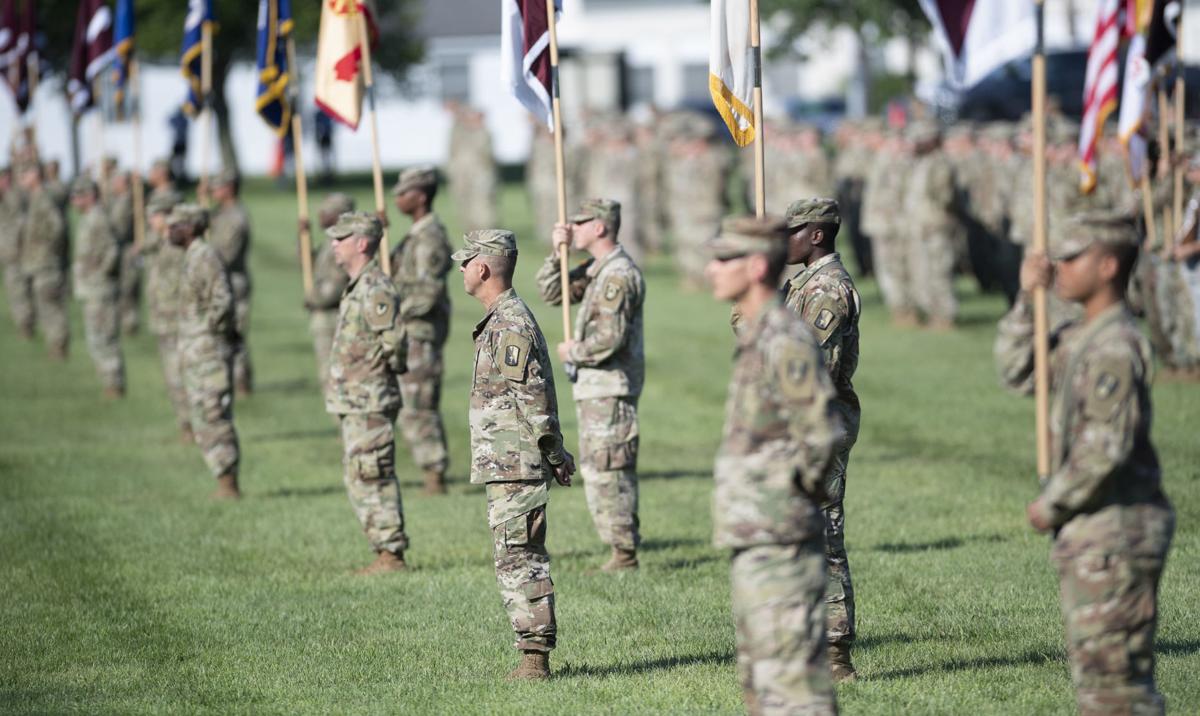 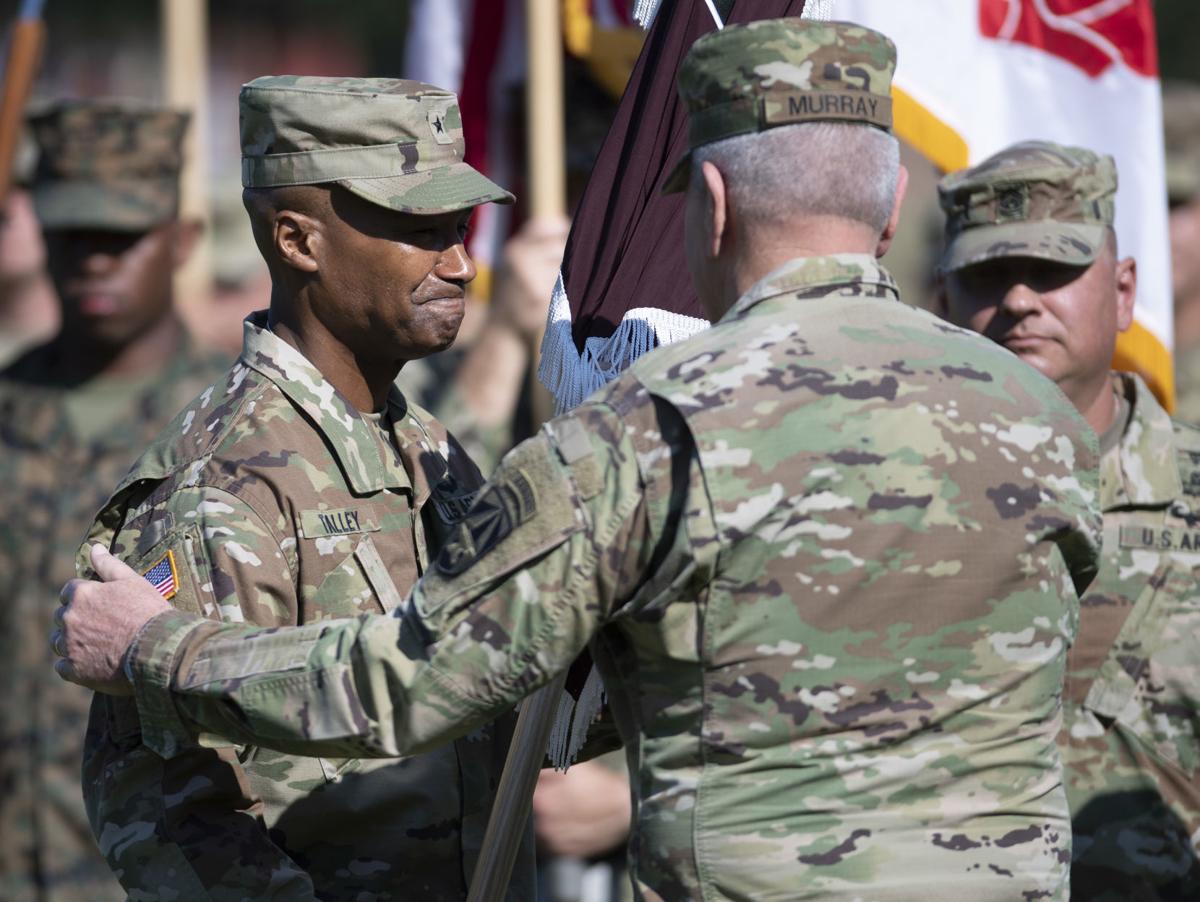 Maj. Gen. Barbara Holcomb walked around Blue and Gray Field, inspecting the troops representing each of the units under the U.S. Army Medical Research and Development Command.

It was the last time she would walk the field as commander of USAMRDC and Fort Detrick. To her side stood the incoming commander, Brig. Gen. Michael Talley, and Gen. John Murray, commanding general of the Army Futures Command.

The three lapped the field to inspect the troops as part of a change-of-command ceremony for Holcomb and Talley on Wednesday morning.

Change of commands in the Army are signified by changing of the colors, or flags. By handing a flag to Murray, Holcomb relinquished her command.

Holcomb served as commander of the military installation for three years, her longest time serving as a leader in one place, she said in her remarks. She’ll leave Fort Detrick for her home state of Texas.

The change-of-command service also served as a retirement service for Holcomb, who reached her mandatory retirement from the Army. She plans to continue to look for ways to serve in retirement, she said before the change of command.

She will miss the people, she said. But one thing she will not miss is deciding whether the post should be closed due to inclement weather.

Holcomb also commented on the beautiful weather during the ceremony. Last week would have been too hot, or as they say in Texas, summer, she said. Wednesday morning was 63 degrees on post, which Texans consider winter, she said.

She turned to Talley and said he might have an easier time deciding whether to close the base for snow and ice.

She said her advice for Talley is to communicate and build strong relationships.

“The work that we do is challenging and fascinating, but working with a high-performing team that likes each other, likes to work together, that was really the most rewarding thing,” she said.

After Holcomb handed the flag to Murray, he handed it to Talley, giving him command of the base and USAMRDC.

Fort Detrick is a familiar place for Talley, who was stationed at the military installation before.

Talley spoke about USAMRDC’s mission to protect soldiers from medical dangers, including infectious diseases and injuries they suffer in combat. He challenged the Army division, which has units across the East Coast, to continue to create and advance treatments and preventive measures for soldiers.

After his remarks, all USAMRDC units marched past the platform where Talley and Holcomb served, a part of the ceremony called pass and review.

Each unit commander saluted Holcomb and Talley as they marched. A salute that served as a hello to Talley and a goodbye to Holcomb.

Soldiers living at Fort Detrick say they have grown used to the brown water that comes out of the pipes.