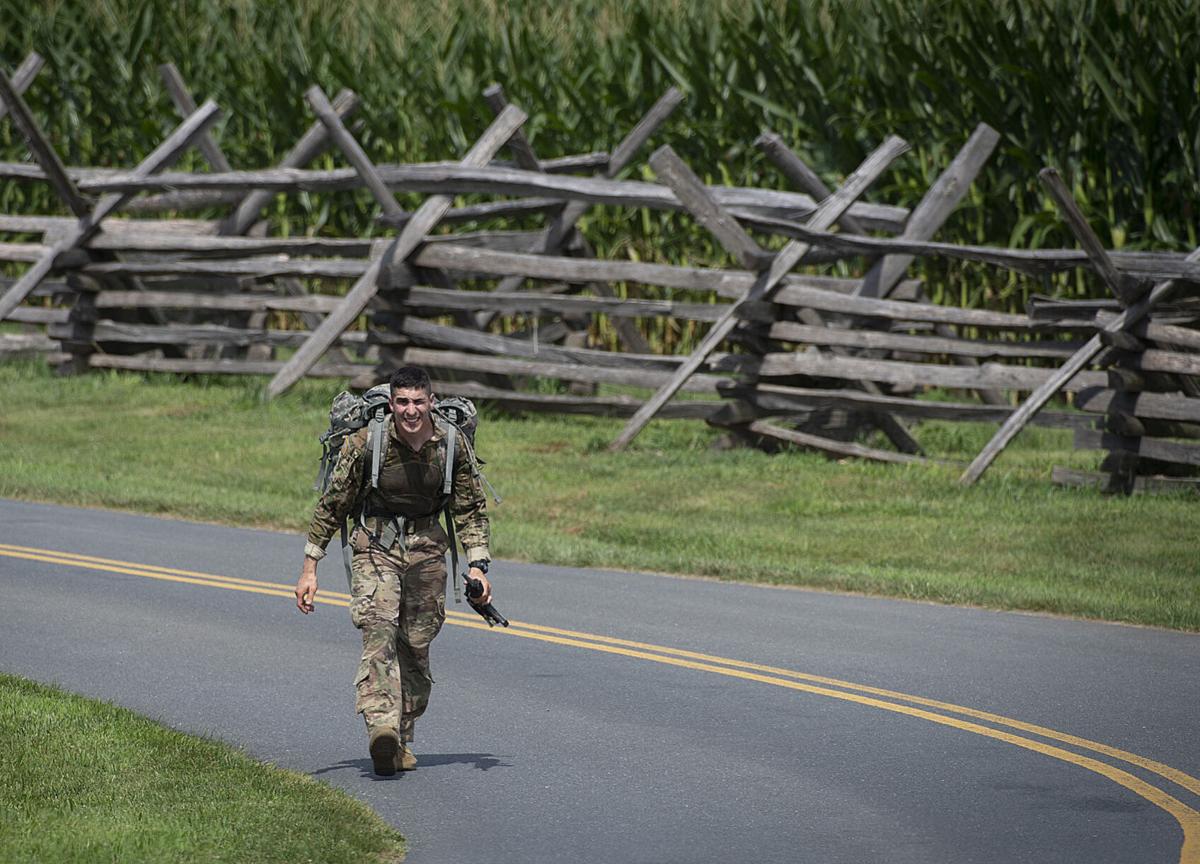 Sgt. Brian Murphy (Charlie Company, 248th Airborne Support Battalion) of Maryland won the Noncommissioned Officer category and is shown on the roadway just past the giant cornfield the soldiers marched through. 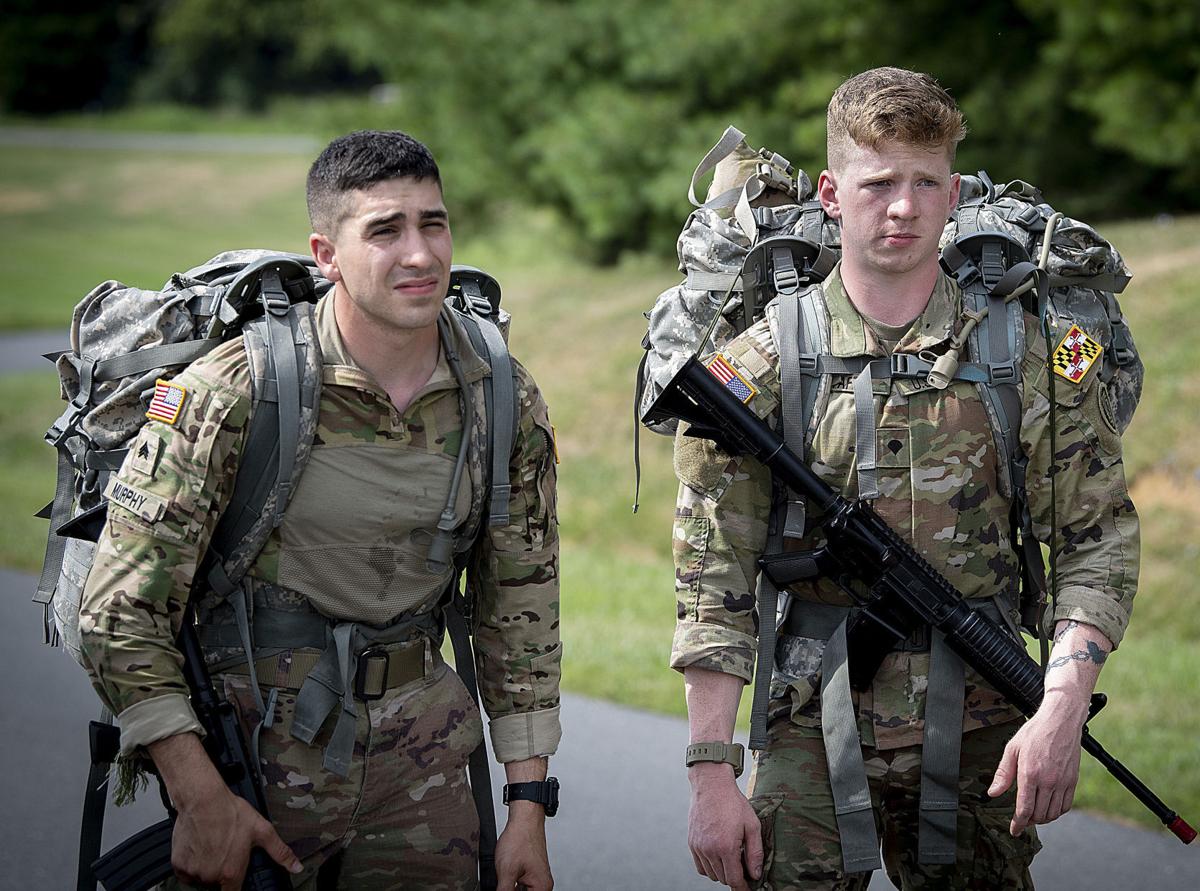 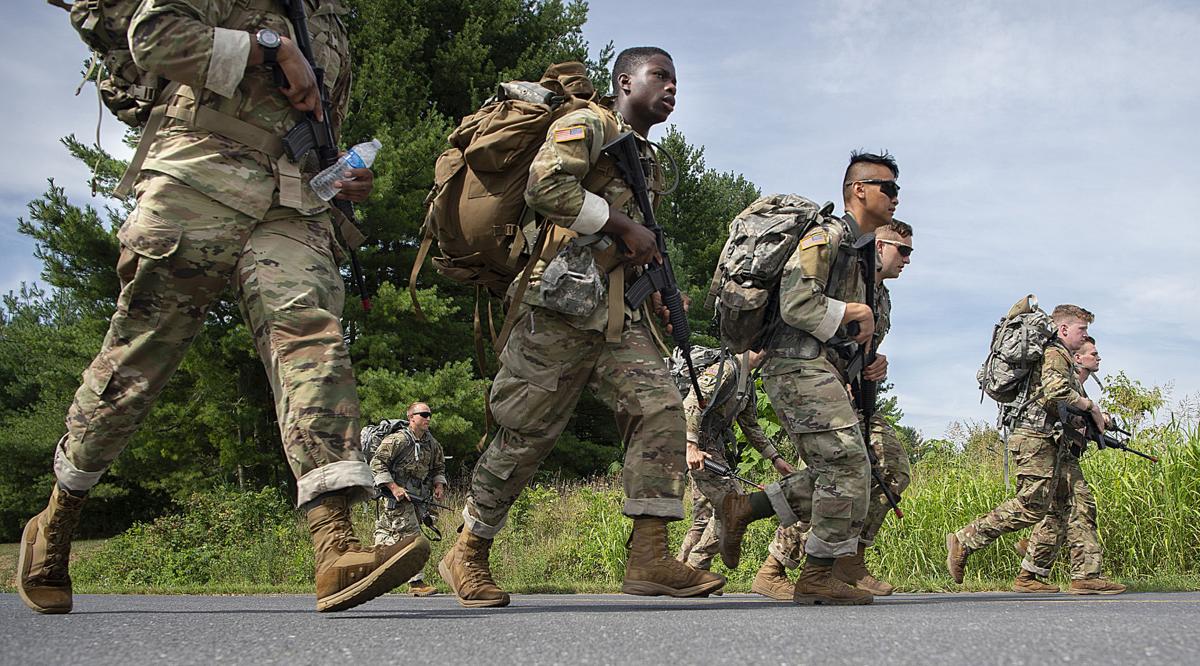 Eight members of the National Guard leave the starting line on a more than 10-mile march Thursday morning at Antietam National Battlefield, just outside Sharpsburg. Those eight young men were competing in a leg of the Best Warrior Challenge, a competition among the best National Guardsmen from Delaware, Maryland, Virginia and Pennsylvania.

Sgt. Brian Murphy (Charlie Company, 248th Airborne Support Battalion) of Maryland won the Noncommissioned Officer category and is shown on the roadway just past the giant cornfield the soldiers marched through.

Eight members of the National Guard leave the starting line on a more than 10-mile march Thursday morning at Antietam National Battlefield, just outside Sharpsburg. Those eight young men were competing in a leg of the Best Warrior Challenge, a competition among the best National Guardsmen from Delaware, Maryland, Virginia and Pennsylvania.

With the backdrop of rolling hills, cornfields, an old church and farms, eight members of the National Guard—four soldiers and four noncommissioned officers—marched for miles along roads where the bloodiest single-day battle in U.S. history occurred.

Those eight young men were competing in a leg of the Best Warrior Challenge, a competition among the best National Guardsmen from Delaware, Maryland, Virginia and Pennsylvania. It was the first time Maryland has hosted the regional event—Region II of the Guard includes those states and the District of Columbia and West Virginia.

Capt. Mike Fedner of the Maryland National Guard said the Best Warrior tests soldiers on mental and physical tasks from markmanship to answering tough questions from commanders to a various amount of obstacles.

The backdrop of the coronavirus pandemic — where Guardsmen have helped distribute food across the state and helped run coronavirus testing sites — has perhaps elevated the visibility of the Guard, Fedner said.

“It’s a good way to test their abilities while representing their state,” Fedner said. “Despite COVID, we still have a requirement to maintain our readiness, and that is the big Army’s mission. To deploy overseas and to stay sharp on those tasks and everything like that.”

Fedner, along with Command Sgt. Maj. James Nugent, helped put together Thursday’s competition. Nugent said the Best Warrior competition has existed for many years, but it wasn’t until six or seven years ago that the physical components were added.

Soldiers must complete at least two days of tasks as part of the regional competition, which includes marksmanship, marching, and various obstacles.

Thursday’s leg of the competition came a day after the soldiers competed at Fort McHenry in Baltimore. They marched with roughly 35 pounds in their rucksack and a simulated weapon past Dunker Church, the D.R. Miller Farm and other monuments on the Antietam National Battlefield, just outside Sharpsburg. They were timed during their 10-12 mile march, Nugent said.

Nugent said the competitors have been moving around the state because they don’t have larger bases like New Jersey’s Fort Dix or Pennsylvania’s Fort Indiantown Gap.

Murphy, a Perry Hall native, said he was excited to be competing and thankful to be walking the same grounds where one of the most important battles during the Civil War occurred.

“It really is humbling in a sense to walk the same ground as warriors before us, there was a lot of fighting, a lot of bloodshed that occurred on these battlefields,” said Murphy, who now lives in Ellicott City. “And it’s something I can’t imagine, but we’ve been trained from pervious generations of warriors up to this point and it really settles in the history and tradition that the army comes from.”

Taft, an Edgewood native, said he liked the fact the competition challenged your mental as well as your physical abilities. The coronavirus pandemic has also created its own unique challenges, he added.

“It’s made it hard for some stuff, getting in the gym and lifting weights and stuff,” said Taft, who now resides in Belcamp. “But it’s a good thing too because it forces you to get creative, so you’re finding ways to think outside the box, which is what we do in the military all the time.”

He, Murphy, Nugent and Fedner said outside of the competition, the prominence of the Maryland National Guard, and overall National Guard has risen due to the coronavirus pandemic, due to their work in communities statewide.

Nugent said he was proud to help showcase some of the best soldiers the National Guard has to offer through the region.

My earliest recollection of the Sharpsburg Battlefield is going to the 100 anniversary reenactment back in '62. My hobby for 20 years was photographing Civil War sites and I've done so from Florida to Vermont to Texas, and Sharpsburg has always been my favorite.

10-4 on Sharpsburg. We try to attend the illumination every year.

As a member of the Frederick Co. Civil War Round Table I participated in the first two or three illuminations when they started back around '89 or '90. They were beautiful.