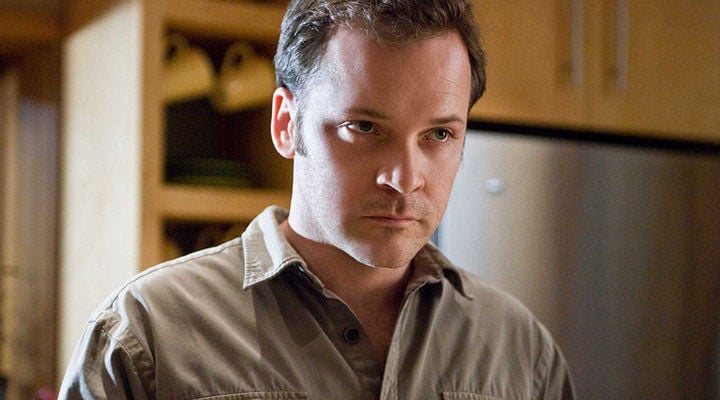 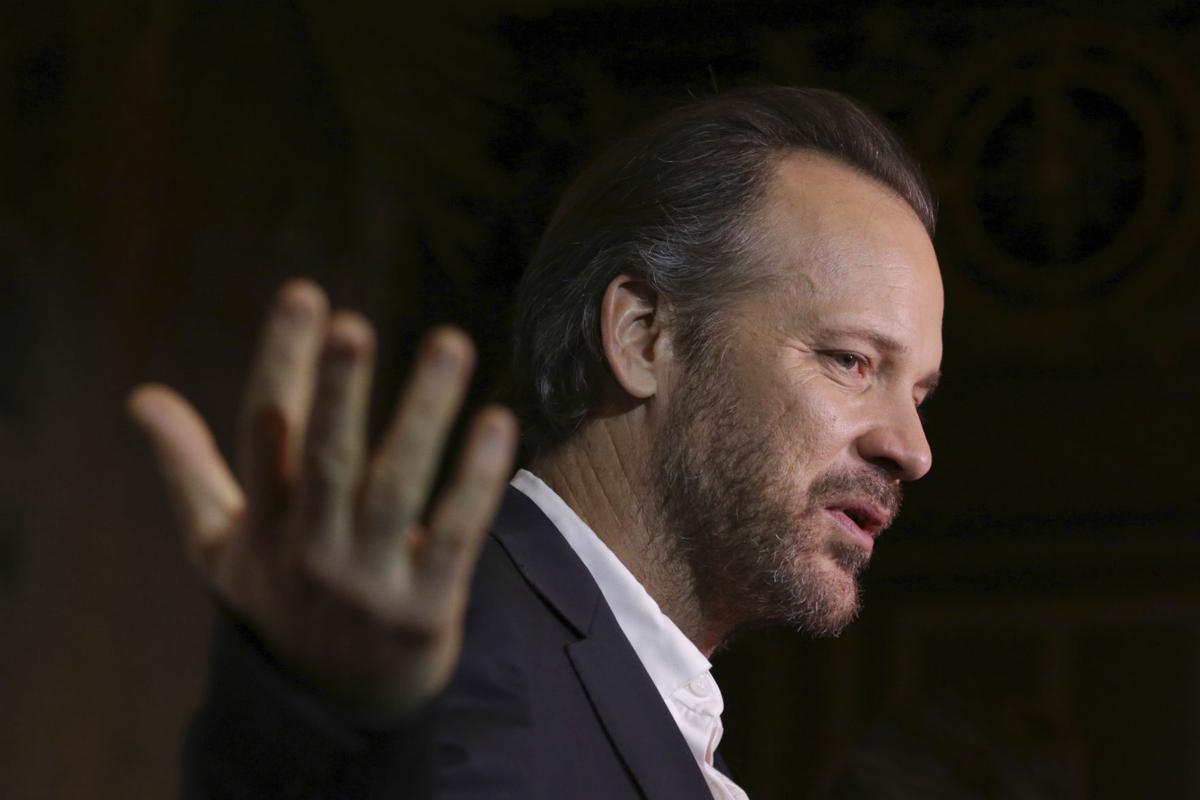 Actor Peter Sarsgaard attends the premiere party for Netflix's "Wormwood" on Dec. 12 at The Campbell in New York. 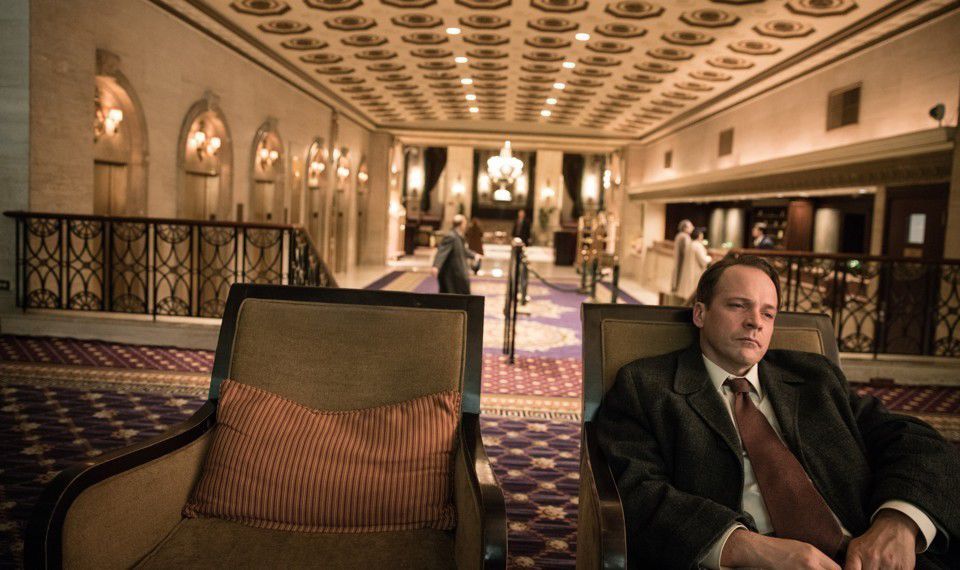 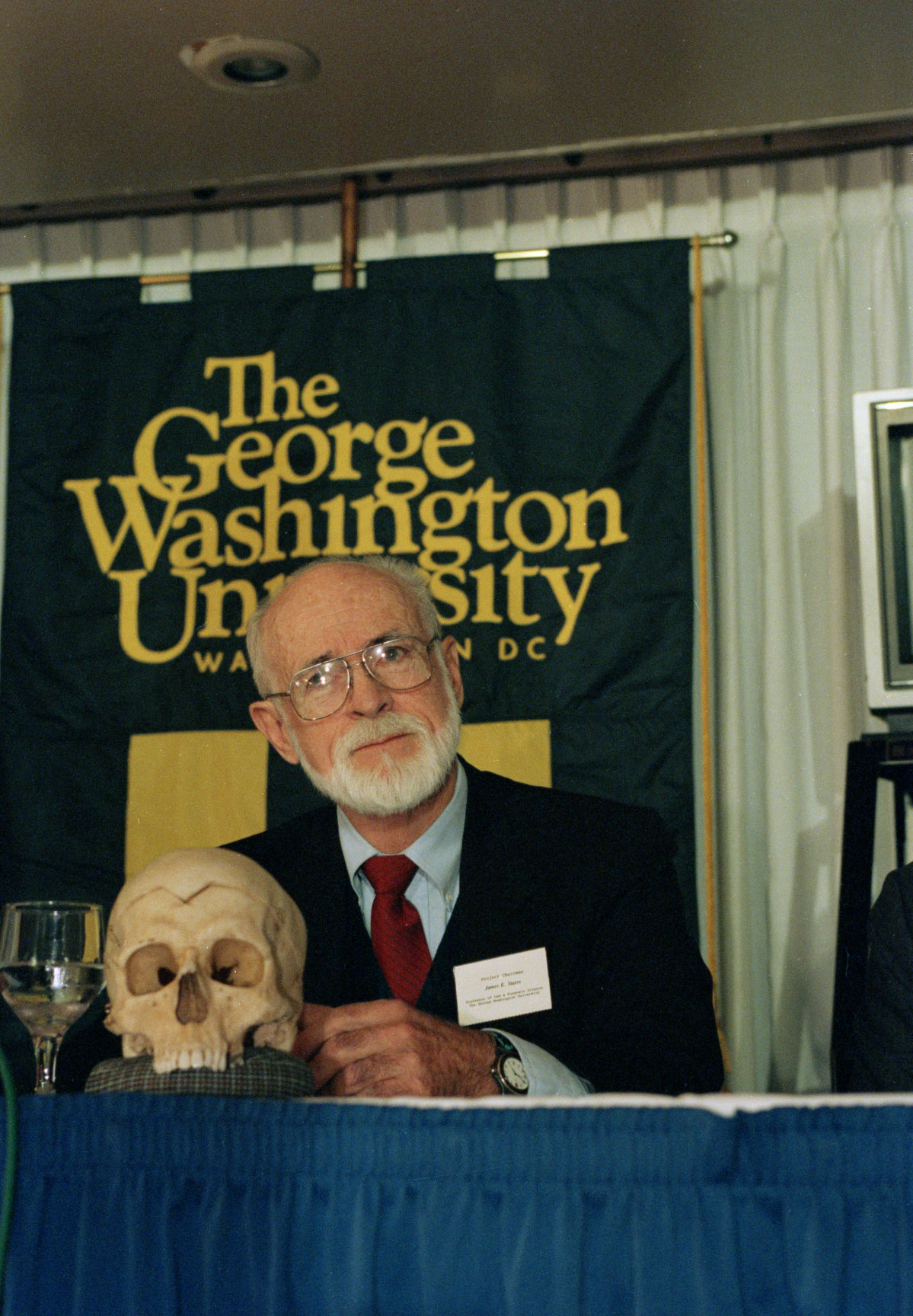 With a plaster cast of the skull of Frank Olson by his side, George Washington University Professor James Starrs meets reporters Nov. 28, 1994, in Washington to discuss the results of a forensic investigation into the 1953 death of Frank Olson, a germ warfare researcher. Starrs, who headed the inquiry, called the results “inconclusive.” 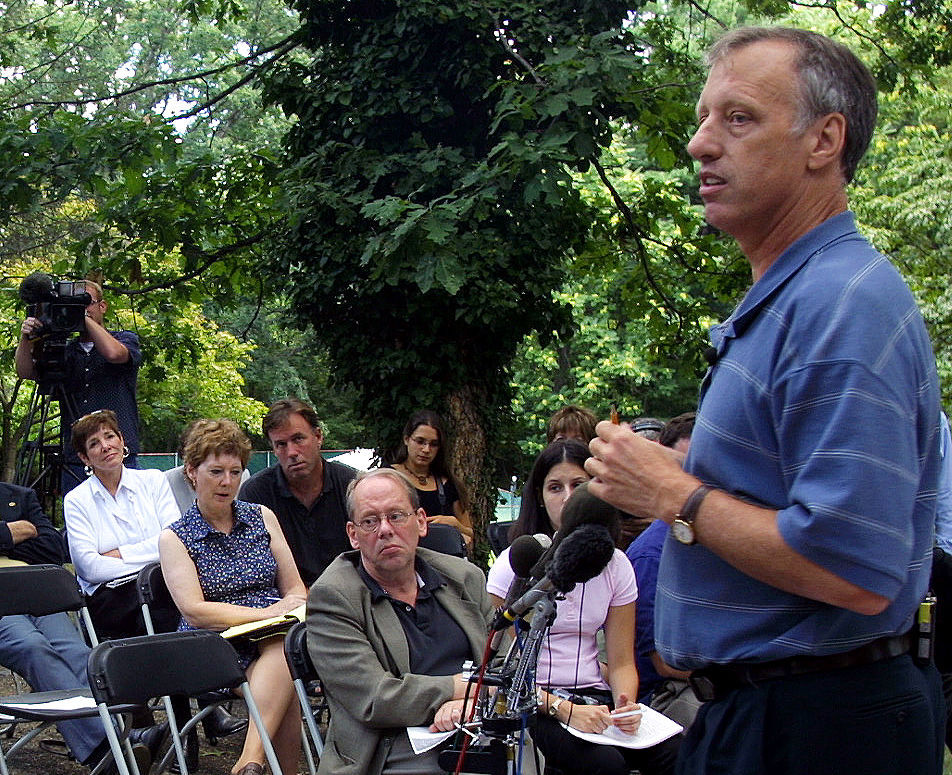 Eric Olson answers questions at an Aug. 8, 2002, news conference outside his home in Frederick about his father’s death in 1953.

Actor Peter Sarsgaard attends the premiere party for Netflix's "Wormwood" on Dec. 12 at The Campbell in New York.

With a plaster cast of the skull of Frank Olson by his side, George Washington University Professor James Starrs meets reporters Nov. 28, 1994, in Washington to discuss the results of a forensic investigation into the 1953 death of Frank Olson, a germ warfare researcher. Starrs, who headed the inquiry, called the results “inconclusive.”

Eric Olson answers questions at an Aug. 8, 2002, news conference outside his home in Frederick about his father’s death in 1953.

A new Netflix series by director Errol Morris takes a deeper look at the circumstances surrounding the death of Frank Olson, a Fort Detrick researcher who died after unwittingly participating in a secret CIA experiment.

Olson, a civilian scientist with Detrick’s former Special Operations Division, died on Nov. 28, 1953, 10 days after attending a meeting at Deep Creek Lake with colleagues from the SOD and the CIA’s Office of Technical Services.

Documents later given to the Olson family by then-CIA Director William Colby show that Frank, along with several other men, was surreptitiously given a dose of LSD that had been slipped into a bottle of Cointreau liqueur. At the time, the CIA had begun to experiment with LSD as a potential truth serum and method of mind control in a project eventually known as MK-ULTRA.

A timeline drawn up by surviving members of the Olson family attests that Frank was “uncharacteristically quiet and withdrawn” when he returned home from the meeting. A few days later, Olson was taken to New York City by two colleagues, ostensibly to receive psychiatric treatment.

He died after midnight on Nov. 28 after falling, or jumping, from a 10th-floor window of the Statler Hotel in New York, according to the initial account given to the Olson family by members of the CIA.

Though “Wormwood” examines the uncertainty surrounding Olson’s death and its official explanation, the heart of the series lies with his eldest son, Eric, who remained fixated on his father’s fall from the window for decades after it occurred.

Over a six-episode arc, we watch as Eric transitions from doubting the CIA’s story behind his father’s death to becoming convinced that the apparent suicide was actually an assassination by the CIA, perpetrated to eliminate a man who had come to be seen as a risk to national security.

The issue, for both Eric and Morris, is the lack of any decisive piece of evidence. The documentarian manages to patch together the many details of Frank’s death through available public records, memories from the family, and interviews with other sources who became involved in the incident, including three attorneys who represented the Olson family in two lawsuits filed against the CIA.

But despite the 64 years that have passed between Frank’s death and the premiere of the series, there have been few new revelations in the case since the early 1990s. Frank died in 1953, and Eric later decided to file a lawsuit against the CIA in 1975, shortly after The Washington Post published a story that revealed the CIA’s involvement in Frank’s death and the Deep Creek experiment.

After meeting with then-President Gerald Ford and CIA Director William Colby, the Olson family received a $750,000 settlement and dropped the lawsuit. The CIA officially acknowledged its role in Frank’s death, but continued to characterize it as a suicide after an experiment gone wrong.

What Morris best captures is Eric’s continued doubt of the CIA story, even after the agency admitted a degree of culpability in his father’s death. “Wormwood” toggles between a few different timelines — from dramatizations of Frank’s experience at Deep Creek and in New York to present-day interviews with Eric and other sources — but shines most when it’s focusing on Eric’s near-obsessive research into discrepancies between the official storyline and his own understanding of his father’s death.

After the family’s meeting with Colby, when they received a file of documents on Frank’s death, Eric became convinced that “the file we [had] been given is one that was prepared to conceal the true story of my father’s death within the CIA,” as he stated in the family timeline. In 1994, he and his brother, Nils, exhumed Frank’s body with the help of family friend Dr. James Starrs, a forensic psychologist who specialized in solving historical cases.

In a news conference that year, four decades after Olson’s death, Starrs said he was “exceedingly skeptical” that Frank had jumped from a window at the Statler, citing the lack of lacerations on the remains and a large injury on the skull that he said was most likely caused by a blow made in the room of the hotel.

Norman Covert, a former spokesman for Fort Detrick, later said that the injury was caused when Frank struck an awning during his fall, according to a 2002 story in The Frederick News-Post.

Soon after the forensic autopsy, a New York prosecutor named Stephen Saracco re-opened the investigation into Frank’s death and won the right for a grand jury to hear his findings. He cross-examined Robert Lashbrook — a CIA operative who attended the Deep Creek meeting and was in the hotel room on the night of Frank’s death — and had plans to depose Colby, who had left his position as director of the CIA in January of 1976.

Before the two men could speak, Colby vanished from his summer home in April of 1976 and was found dead five days later. The death was ruled to be a boating accident by the Maryland Medical Examiner. Saracco later closed the investigation and the grand jury evidence was never revealed.

Eric, though, continues to believe that his father’s death was a deliberate plot by the CIA. In 2002, he held another news conference and announced that a former Fort Detrick researcher, Dr. Norman Cournoyer, had called and told him that his father was actually a CIA operative who worked on “Project Artichoke,” a secret research project into intensive interrogation techniques.

Cournoyer also said that his father had witnessed interrogations involving electroshock, drugs and torture in Western Europe, Eric told reporters in the news conference, which was covered by The Frederick News-Post.

It was Frank’s misgivings about the project, and belief that the U.S. had used biological warfare during the Korean War, that led the CIA to assassinate him, Cournoyer allegedly said.

At the end of “Wormwood,” Morris also interviews Seymour Hersh, an investigative journalist who first broke the story of the CIA’s secret interrogation methods. According to Hersh, and to Eric, a CIA source confirmed that the agency had murdered Frank when Hersh followed up in 2014.

That interview, which Eric hoped would be the smoking gun for the entire case, was more like a blank. Hersh refused to compromise his source and never published a follow-up piece on the supposed confirmation. A second lawsuit that Eric filed against the CIA was dismissed by a federal judge, despite the acknowledgement that many of the claims in the suit were confirmed by public records.

For Eric, dissecting the death of his father became a filial duty and a mission of Shakespearean proportions. Even the name of the series, “Wormwood,” is a reference to the play “Hamlet,” in which the son of a slain king sets out to avenge his father’s murder.

“My father was executed by the CIA,” he said at one point in the series. “The only way this story becomes bearable is if it is known.”

But even Morris, the director behind documentaries such as “Tabloid” and “The Thin Blue Line,” wasn’t able to provide a satisfying conclusion to his father’s story. The CIA, as it has since 1975, continues to classify Frank’s death as a suicide after an experiment gone horribly wrong.

I fully understand the fixation on pursuing this, it is an egregious wound to the family that cannot heal without a sense of justice done.

In NYT bestselling author David Talbot's book, "The Devil's Chessboard" he goes into great detail on mkultra and Frank Olson death. Below is an excerpt and a link to the entire chapter.

"Shortly after Olson fell to his death from the Statler Hotel (now the Hotel Pennsylvania), someone placed a brief phone call from the scientist’s hotel room to Dr. Abramson. “Well, he’s gone,” said the caller. “Well, that’s too bad,” Abramson responded, and then the caller hung up".

Watched the first two episodes yesterday. Nice looking series, but I am not sure I buy the conspiracy premise. The whole plan of dosing these guys w/o permission was obviously a giant Charlie Foxtrot (as my military friends say), but it seems more a case of spiraling incompetence and bad decisions rather that a deliberate plot. No doubt the government is responsible; I just did not see any grand intent.

He was a known partier. No cover up

Everyone of that generation drank like fishes and smoked like chimneys. But slipping someone LSD without their knowledge? Now THAT is foul. And trying to commit someone who wants out of sleazy operations to a mental institutions? How do you NOT see a cover-up, especially when the government pays out?

This conspiracy theory actually holds water. The government, including Gerald Ford and his CIA director apologized to the family and gave them an out of court settlement years later. That said, who knows how much Netflix has embellished the story.

nevermind I see it

what will the name of the series be? I think I missed it

It certainly possible that Eric is right, but there is little evidence to prove beyond a shadow of doubt, which would be necessary in a murder trial.

10. Welcome fall in the mountains at Colorfest