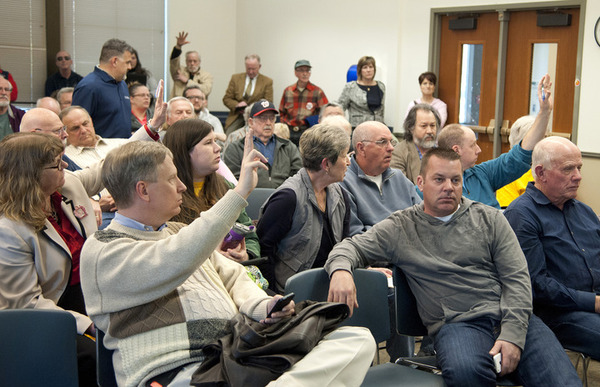 A large crowd fires questions at the panel representing the developer of the Monrovia Town Center project Monday during a community meeting at the Urbana Regional Library. 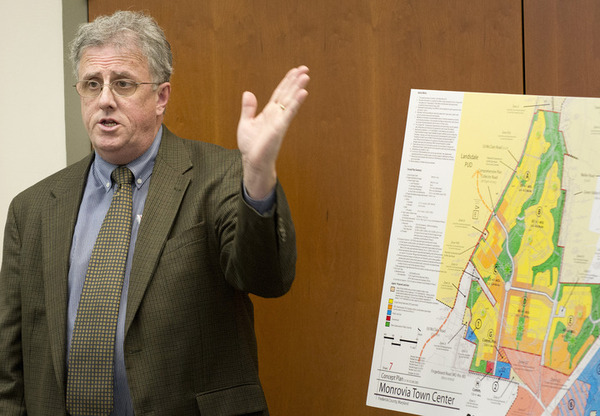 Dave Ager, a designer at Townscape Design, answers questions from the audience at a community meeting held last night by the developer of Monrovia Town Center. The meeting filled the community room of the Urbana Library. Staff photo by Bill Green

A large crowd fires questions at the panel representing the developer of the Monrovia Town Center project Monday during a community meeting at the Urbana Regional Library.

Dave Ager, a designer at Townscape Design, answers questions from the audience at a community meeting held last night by the developer of Monrovia Town Center. The meeting filled the community room of the Urbana Library. Staff photo by Bill Green

A standing-room-only crowd showed up Monday night at the Urbana Regional Library for a meeting with Monrovia Town Center developer Roy Stanley.

The long-awaited meeting with Stanley was scheduled after the Frederick County Commissioners suggested that he sit down with the public to discuss his plans for the development.

Noel Manalo, an attorney for Stanley, said Monday night’s meeting was not a requirement, but county commissioners thought it was a good idea before they head into another round of hearings.

On Jan. 16, the commissioners approved a rezoning measure allowing a scaled-back version of the Monrovia Town Center to advance. The proposed development was downsized from 1,510 homes to 1,250 homes. Of the 1,250 dwellings, half would be slated for residents older than 55.

The fate of Md. 75 and improvements are still unclear, even though residents of Monrovia are deeply concerned about overdevelopment of the area along Md. 75.

After the first round of hearings, multifamily or two-over-two dwelling types will not be permitted. The homes will be 70 percent single-family detached houses and 30 percent single-family attached/townhouses, and there will be no access to Weller Road from the development, including the park area and high school site.

Questions regarding road improvements dominated Monday night’s meeting, where Stanley shared his point of view about the proposal.

“I do a lot of developments, and if my backyard was zoned for this, I would do it,” Stanley explained after several residents asked if he would like it if a large development were built in his neighborhood.

Stan Mordensky, of Monrovia, quickly reminded Stanley of his loyalty to farming.

“I was trying to get Roy to rethink,” Mordensky said. “He prides himself on being a farmer, and this is prime farmland. We would be very happy if the property was sold to a young farmer to farm.”

Mordensky said he felt his questions went unanswered. Dave Honchalk, another Monrovia resident, felt the same way. Honchalk thinks communities in the southern parts of the county are unfairly targeted, even though the infrastructure for new developments does not exist.

“Quite honestly, I don’t know you can plan something this massive without saying this is what it’s going to be,” Honchalk said in an interview.

“I can’t guarantee what is going to happen in the future, but I can guarantee that we don’t want to go through this process again,” Stanley told Reyes.

The Frederick County Planning Commission has scheduled public hearings on the Monrovia Town Center Planned Unit Development rezoning request revisions and the development rights and responsibilities agreement at 6 p.m. on March 19, 20, and 26 at Winchester Hall.

Let's just start with water. The proposed Monrovia development will use a pipeline to draw water from the Potomac. Will that pipe be up or downriver of the millions of gallons of proposed incinerator waste water that's will use the old 10 mile Alcoa pipe that enters the Potomac at Point of Rocks at the mouth of the Monocacy? Circle of life?

What filters are in place to ensure clean drinking water for this Monrovia development?

Frederick waste water treatment plants already fail to keep raw sewage out of the Monocacy. Who pays for the new one? Upgrades for the old one?

Need to slow down on all these open ended projects until at least one can be seeing to fruition. Right now Frederick has several developer grand ideas on paper and little upfront.

The public meetings are a farce..This BoCC wouldn't hear a tree fall in the forest either...Me

As I'm sure many have noticed, the county and the developers have flipped the MD-75 issue since the last round of public hearings.

At the hearings, many residents testified against MTC because MD-75 is dangerous and can't handle more traffic. Now the county and developers are telling us that MTC will lead to improvements to MD-75.

Does anyone who testified against MTC believe this? Does the possibility of "fixing" MD-75 persuade you that MTC would not be so bad?

Give Mr. Stanley the money it will cost to fix MD 75 and Mr. Stanley will be happy to be a farmer again.

The county saying they will put route 75 improvements at the top of their list is actually just Blaine putting lipstick on a pig.

There was also a robust crowd at city hall for the planning commission hearing on Citizens/Montevue. It's great to see so many involved in their community when the BOCC is operating at a very shady level.

All are old white people. True.

Mainly those who post signs and those who remove them.

Developers' community meetings are broken and need to be fixed in Frederick County. County law states that it is a requirement BEFORE the development application but the County neither defines what the meeting should be, nor do they enforce or even verify whether it happens. That's how we wind up in a situation where we finally have this meeting a year and a half too late. That's also why we have a situation where back in October, the developer tells us that he had a "couple people" at a meeting. During four nights of hearings, with hundreds in attendance, the developer and his lawyers offered nothing of substance about that meeting. Then magically in January, at the BoCC hearings, they took their memory pills and suddenly recalled meeting with 20-30 people! The funny/sad part was that they also pointed to a tool shed on the grounds of the drag strip as the location of the meeting ... which also would have been on a cold, windy night according to their "announcement." Do you believe any of it? I certainly don't. Until these County processes like this one are fixed, we'll continue to have developers (and the County) ignoring the residents and building whatever they want, where they want - regardless of the impact.

These are uscrupulous criminals you are hoping to change. It's not going to happen.

Roy is regretting the day
that Blaine bargained with Rand ex parte
a do over he's trying
if his story you're buying
he'd be happy to meet you halfway.

Ballenger-creek, the person your are referring to is the developer's son Kevin Stanley, He's not asleep, he's just upset about the delay of the millions he not able to spend..

I'm anxious to see the actual agreements to find out how much future Frederick County tax money Blaine Young is going to divert to the developer.

don't like this, get out and vote in primaries. preferably as a registered R to make far more of a difference than you would otherwise.

Voting for (R)'s is the problem. All five BoCC members are R's........incinerators, used tire burning sites, underfunding education, closing nursing facilities for the poor, rampant over development in Monrovia............that's what Repubicans do.

You will find Democrats and Republicans in this mix of people - all are against Blaine Young and his minions (minus Gray) - it's not about sides, it's about honesty and integridity and BY has none! And he rules the roost with his bully ways.

Lincoln, really??? Jan brought us WTE, education has never seen a cut, this BoCC isn't even close to the number of permits issued as the prior board (also Jan) thete are no nursing homes closing.

So just what are you talking about?

The people in the picture sure seem interested in what is happening. Wake up dude in the front row..