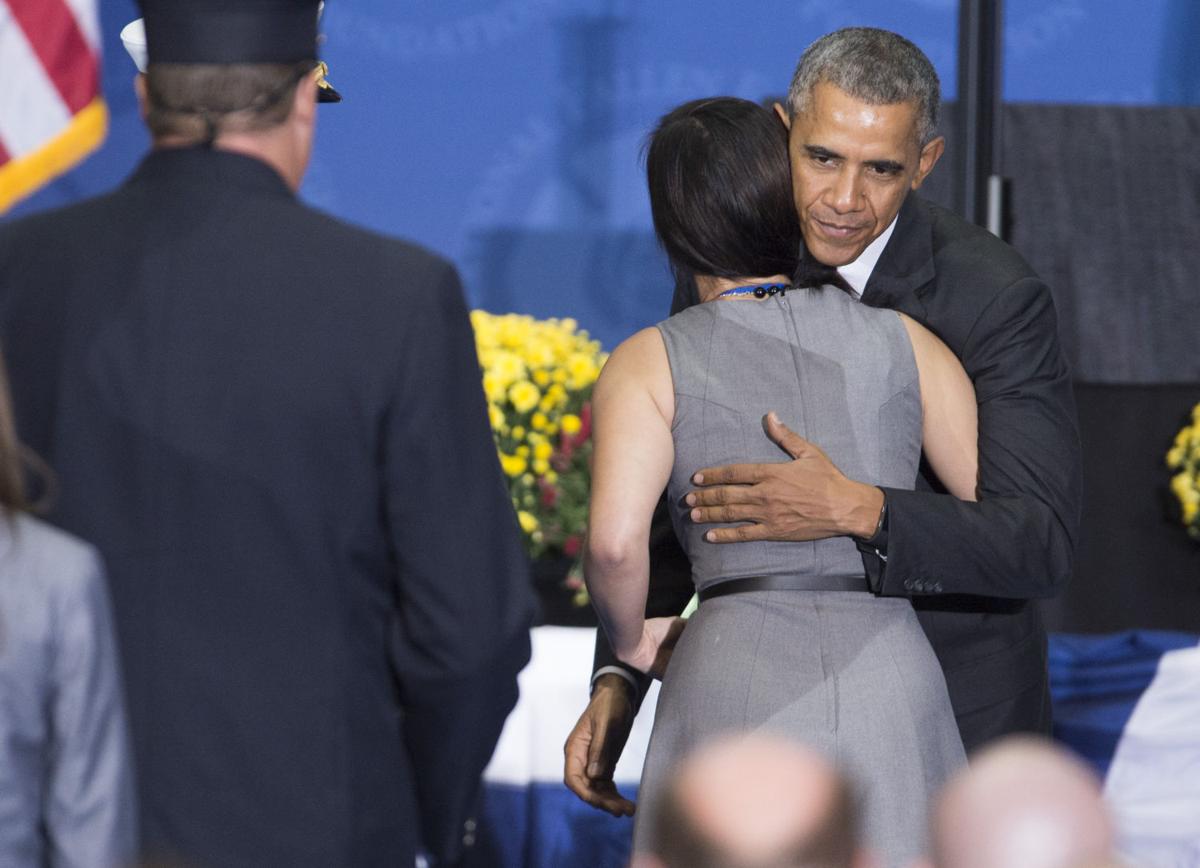 President Barack Obama greets a family member of Matthew Goodnature, of Oregon, who was honored Sunday during the Fallen Firefighters Memorial Ceremony on the campus of Mount Saint Mary’s University in Emmitsburg. 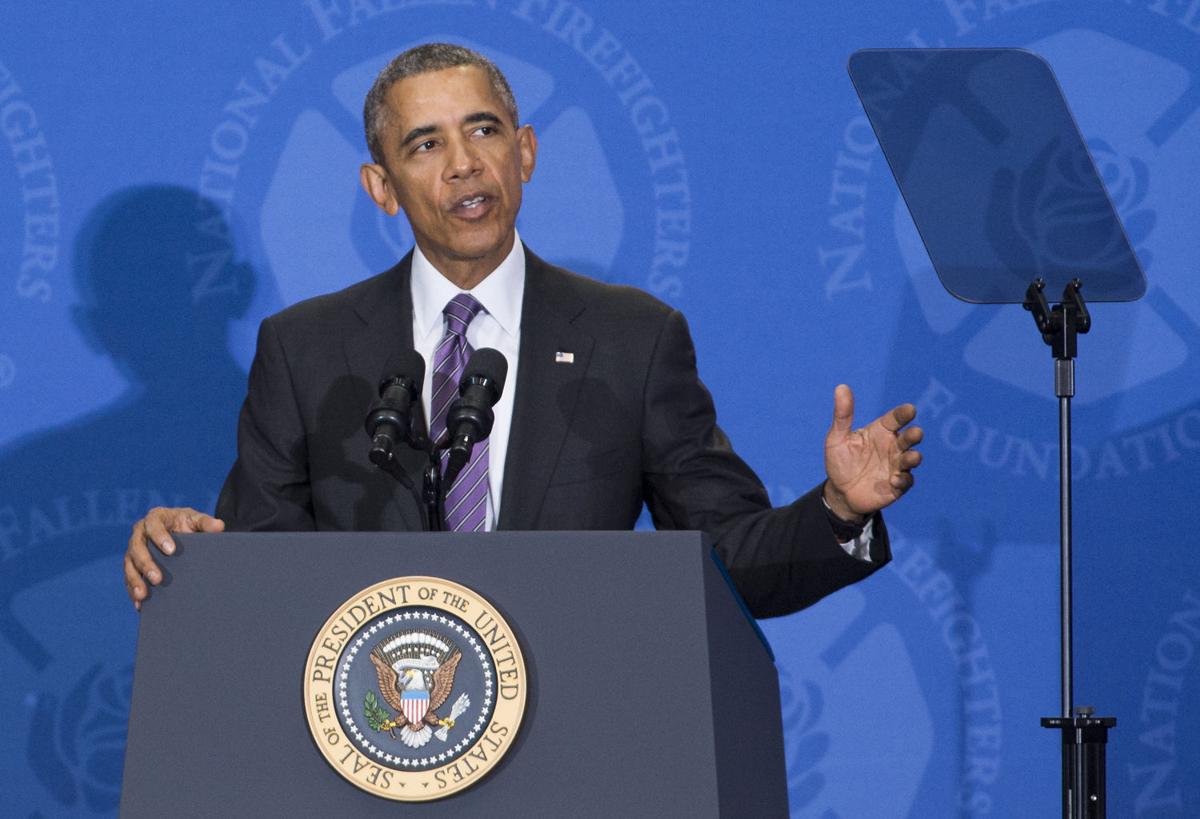 ABOVE: President Barack Obama addresses the audience Sunday during the Fallen Firefighters Memorial ceremony on the campus of Mount Saint Mary’s University in Emmitsburg. BELOW: Caden Garner, 9, of Shippensburg, Pennsylvania, attended the Fallen Firefighter Memorial ceremony Sunday along with his father, a leutenant in the Loudoun County, Virginia, Fire and Rescue Department, and member of the honor guard. 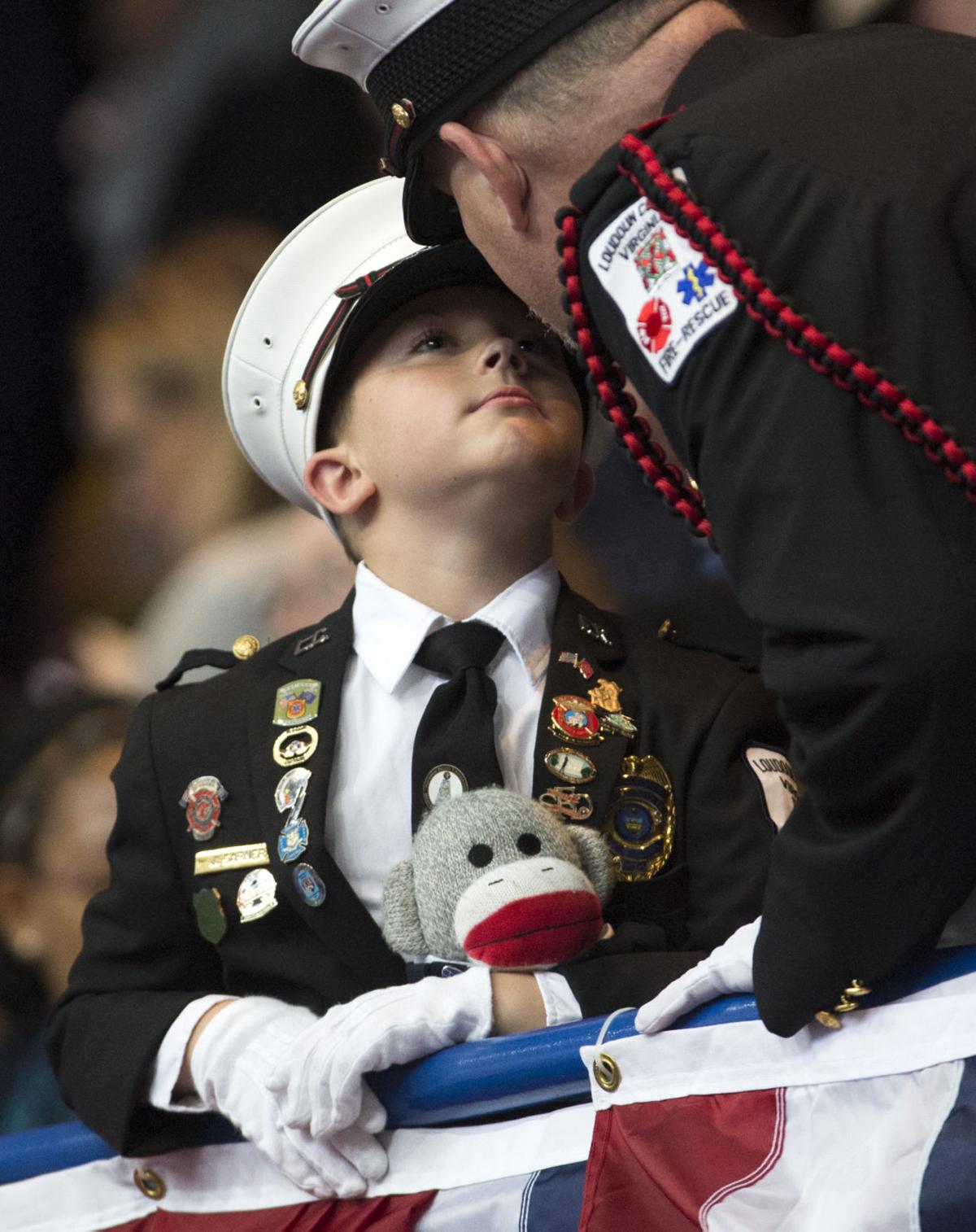 Caden Garner, 9, of Shippensburg, Pennsylvania, attended the Fallen Firefighter Memorial ceremony along with his father, a leutenant in the Loudoun County, Virginia, Fire & Rescue Department, and member of the honor guard Sunday.

President Barack Obama greets a family member of Matthew Goodnature, of Oregon, who was honored Sunday during the Fallen Firefighters Memorial Ceremony on the campus of Mount Saint Mary’s University in Emmitsburg.

ABOVE: President Barack Obama addresses the audience Sunday during the Fallen Firefighters Memorial ceremony on the campus of Mount Saint Mary’s University in Emmitsburg. BELOW: Caden Garner, 9, of Shippensburg, Pennsylvania, attended the Fallen Firefighter Memorial ceremony Sunday along with his father, a leutenant in the Loudoun County, Virginia, Fire and Rescue Department, and member of the honor guard.

Caden Garner, 9, of Shippensburg, Pennsylvania, attended the Fallen Firefighter Memorial ceremony along with his father, a leutenant in the Loudoun County, Virginia, Fire & Rescue Department, and member of the honor guard Sunday.

President Barack Obama praised men like Michael Garrett, a volunteer firefighter who he said served as a junior firefighter at age 16 and was on his way to graduating with an associate degree in emergency services.

And people like Kevin Bell, whose wife said the day he graduated from the fire academy was one of the happiest days of his life. Bell was known for his kindness and generosity and served as a role model to kids who lived in his neighborhood, Obama said.

Garrett and Bell both sacrificed their lives for others. Garrett died at age 28 after a cellphone tower fell on him when he was pulling an injured utility worker out of harm’s way. Bell was killed in a house fire.

And they did it with humility and selflessness.

“Imagine what it takes to put on that heavy coat, and that helmet, and override the natural human instinct for self-preservation, and run into danger,” Obama said, “as others are running away.”

Garrett and Bell were among 87 people who were honored Sunday morning for doing what they believed in and putting the lives of others before their own.

W. Craig Fugate, the Federal Emergency Management Agency administrator, introduced Obama during the service, and talked about the selflessness of firefighters. He said when they are running out to a call, they don’t ask questions about themselves, but always about the people they serve.

“Will I get there fast enough? Will we be able to stop it? Can we get a pulse back?” Fugate said.

They never think “I may not go home,” he said.

He said that President Obama has gone out to disaster after disaster and has seen all these people have accomplished. He’s seen what they do day after day. He knows how important their work is.

The president said during the ceremony that these firefighters lived by a “fundamental principal.”

“That I am my brother’s keeper, I am my sister’s keeper,” he said, “that we look out for one another, that there’s something bigger than each of us individually that we have to be true to.”

These firefighters went to work each day and “literally walk through fire,” he said, not knowing if they will make it home that night.

They are extraordinary people, Obama said, who set an example for everyone.

“And yet, the fallen that we honor today would probably have said that they were just ordinary Americans,” he said, “who were doing work they believed in, carrying on a tradition as old as America itself.”

Obama also talked about the severe wildfires that have been burning across the country from California to North Carolina. This year, he said, nearly 50,000 wildfires have burned more than 9 million acres. At one time this year, 32,000 firefighters were trying to combat the fires. Thirteen died, he said.

As a nation, Obama said, we must work to prevent fires and get firefighters the equipment they need to do their job and “come home safe” — a statement met with thundering applause from the audience, many of whom had loved ones that didn’t make it home safely.

After he spoke, Obama personally greeted the families of the firefighters who were honored for their service, staying for more than an hour. He met each family with a warm smile and hugged and shook the hands of hundreds of people who lost their loved ones.

The names of each of the firefighters who were honored Sunday were carved into a plaque which will be displayed at the National Fallen Firefighters Memorial.

The families who attended the memorial came from across the nation to honor their loved ones.

Steny Hoyer, the House Minority Whip, and a Democratic representative from Southern Maryland, also addressed the crowd during the ceremony. He referred to Pope Francis’s recent visit to the United States. The pope went to Ground Zero in New York City and met with families of the fallen and first responders from September 11, 2001, Hoyer said.

The names of so many loved ones are inscribed at the 9/11 Memorial. “We can see and touch them, we can never forget them,” Hoyer said, again referring to the words of the pope.

The Mayor of Emmitsburg, Don Briggs, and County Executive Jan Gardner, also both welcomed everyone — families who came from near and far — to Frederick County. They expressed how honored they were to host the memorial and thanked them for their service.

Although words can’t heal the pain the families feel from the loss of their loved ones, Obama said they should know the American people stand with them.

“Every single day, across our country, men and women leave their homes and their families so they might save the lives of people that they’ve never met,” Obama said. “We can never repay them fully for their sacrifices.”