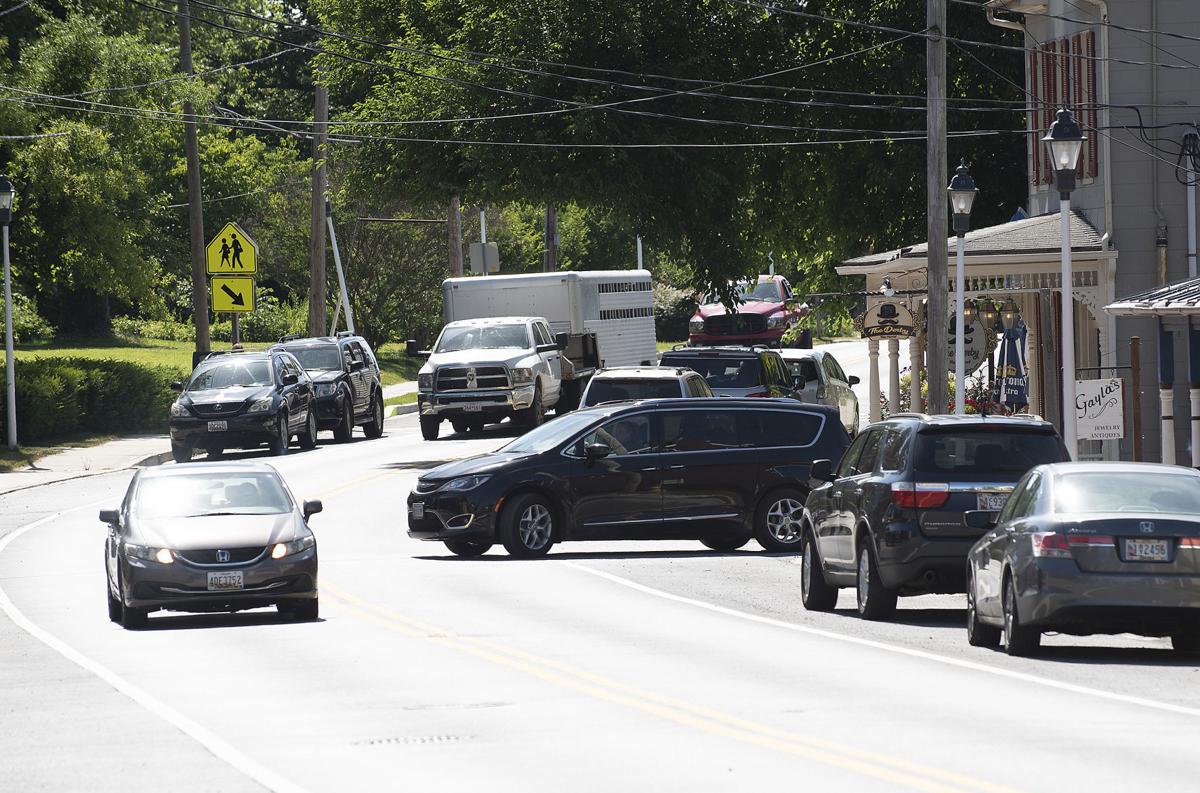 Traffic moves along Main Street in New Market. Residents have started a grassroots effort to slow traffic there. 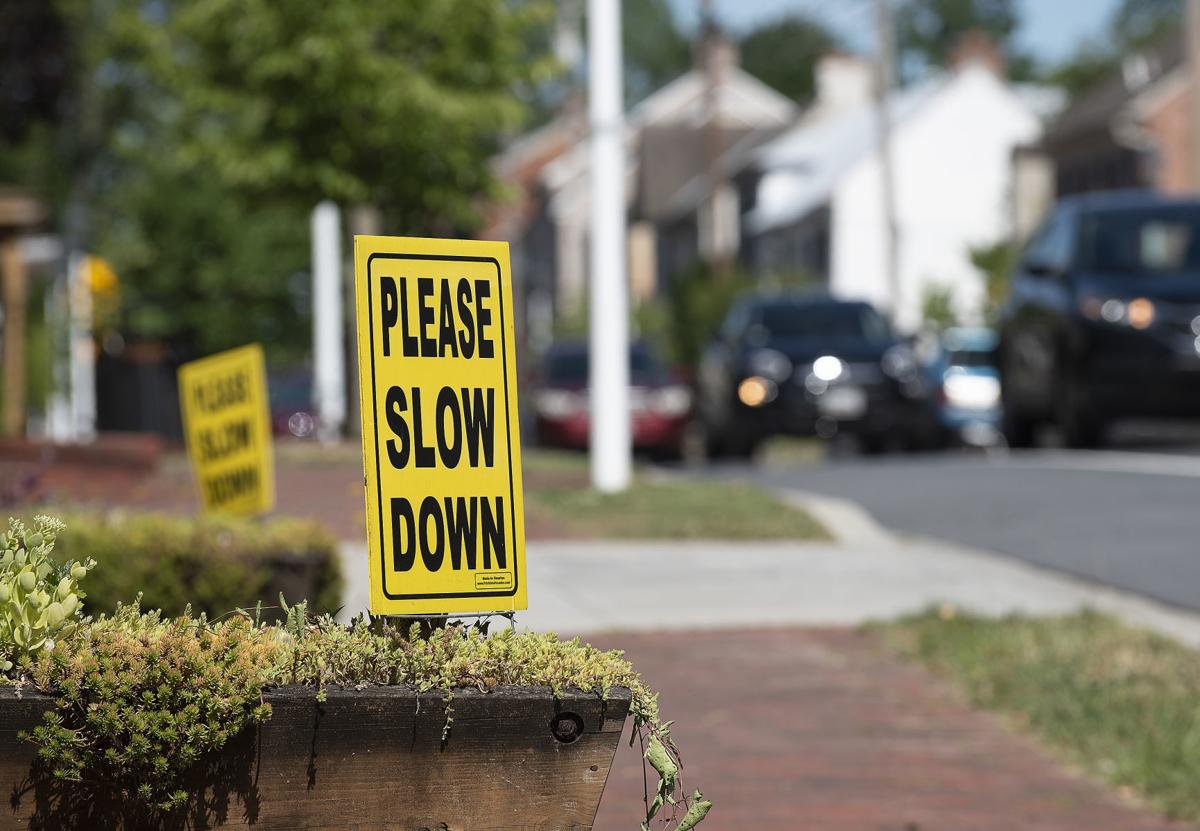 Residents have put up signs to remind drivers to slow down along Main Street in New Market.

Traffic moves along Main Street in New Market. Residents have started a grassroots effort to slow traffic there.

Residents have put up signs to remind drivers to slow down along Main Street in New Market.

Kelly Jarvis can hear the roaring of the cars as they speed by her yoga studio, Fit2Shine, on Main Street in New Market.

“It’s consistent,” she said. “You can be sitting here doing work or engaging in conversation, and it might be every 10 cars that go by with a swoosh.”

By the time she looks up to get a glimpse of the car, it’s already whizzed by.

“It doesn’t feel good to hear that and have that thought in mind that people are flying by,” she said. “At any given moment, in this distracted world, they can look down at their phone and crash.”

Unfortunately, every so often, a car does crash.

About a month ago, a car overturned and hit three other cars — totaling them all. For residents, businesses and town officials, that crash was the final straw. A few days later, community members took to social media and posted “Please Drive 25” signs on Main Street as part of a grassroots effort to slow drivers down.

Town officials have also started to discuss implementing traffic-calming devices on the street, which are designed to slow down drivers as well as protect pedestrians.

An update on these efforts will be discussed at a town meeting Thursday at Town Hall at 7 p.m.

Long-term solution not near

Main Street is a slow section of Md. 144 that runs right through New Market. The posted speed limit is 30 mph. While the town markets itself as a destination — it is known as “the Antique Capital of Maryland” — Main Street is being used as a thruway for commuters.

A proposed bypass road that would extend Mussetter Road and connect commuters from Md. 144 to Md. 75, diverting traffic from Main Street, is a long way off. The project remains at a standstill as the town of New Market and Frederick County continue to debate a water and sewer amendment that would allow a New Market subdivision to be built off Boyers Mill Road.

Until then, the grassroots effort is trying to get motorists to slow down on Main Street.

For instance, Jarvis, a Lake Linganore resident, has also created a Facebook page — Drive 25 on Main Street — in hopes of changing motorists’ behavior and remind them to drive 25 mph.

“I genuinely believe that people want to be good to their neighbors and don’t mean to be inconsiderate drivers,” she said in an email. “I think they just need to be reminded that there are humans living and working there and it is not just the pass-through street.”

While he has seen an increase in traffic throughout the county, “that stretch of road sees a lot of traffic, in my opinion, on a daily basis,” he said.

“It’s fair to say that people speed on Main Street in New Market,” he said.

In addition, the town, along with engineers, is trying to lay out a plan to implement pedestrian nodes using bollards.

Bollards, short vertical posts that are commonly painted yellow, will be placed in the street near sidewalks to prevent cars from passing a vehicle in front of them when it is trying to turn left.

If implemented, the bollards will be placed at Prospect Alley near The Derby, Sixth Alley by Town Hall and Eighth Alley near Vintage.

Michelle Corpora, a member of the New Market Civic Partnership, a group dedicated to fostering the economic development of Main Street, said the partnership is looking into grants to fund a traffic study.

The study would address budgetary concerns, proximity to schools and emergency services, parking and other issues, she said.

The 30 mph speed limit will also be reduced immediately to 25 mph, according to Mayor Winslow F. Burhans III. New 25 mph speed limit signs will be ordered and changed over in the coming months.

To remind people to drive the speed limit, resident David Taylor — whose two cars were totaled in the most recent crash — bought 100 “Please Drive 25” signs and distributed them to residents and businesses to post.

He wants to see fines tripled “and let the people that choose to break the law get caught and pay dearly.”

Burhans said that that’s something he has always pointed out.

“We want the destination traffic, not the commuter traffic,” he said.

Local leaders say they’ve been doing their homework on how to make New Market’s historic district a safer place and action is already being taken.

It is not just New Market that has problems with speeding. Cars coming into Middletown speed too. The speed limit is 35, after Middletown Pkwy and goes down to 30 after you pass the stream at the bottom of the hill, before you get to School House Rd. Now you cannot set your cruise control at 25 and have it hold, so most cars would have to go 1 - 5 miles per hour over the 25 mph speed limit. There is also speed cameras, but they usually will not take a photo unless you are going 5 mph over the speed limit,

I believe the threshold is 11 mph over. 5 is way too low, in my opinion and would snag far too many drivers needlessly.

Technically, in Maryland, it is greater than 11 mph over the posted speed limit.

11 on the open road, 5 mph in Frederick City or anywhere in MOCO.

In MoCo it is greater than 11 mph. From MoCo website: https://www.montgomerycountymd.gov/speedcameralocations/

Montgomery County’s automated speed enforcement program, Safe Speed, enforces speed limits in residential areas with a speed limit of 35 mph or less and in school zones with any speed limit. Speed cameras function 24 hrs per day/7 days a week except in school zones.

Vehicles traveling 12 miles per hour above the speed limit are issued citations.

No points will be issued against the vehicle owner’s driving record.

Once the warning period is complete, actual citations will be issued to the registered owner of the car that was recorded exceeding the posted speed limit by 12 mph. Each violation carries a maximum fine of $40 . These citations are not reported to insurance companies and no license points will be assessed on your driver’s license.

Cruise control while driving thru a town? That’s just dumb.

It makes sense to me because I have a heavy foot and setting the cruise control I don't inadvertently speed.

You wrote “Now you cannot set your cruise control at 25 and have it hold, ” so how does it make sense to you?

Traffic cameras keep traffic under control on Rt. 27 in Damascus. It could work in New Market also.

I agree with Gary. That would be the easiest and fastest solution. Not sure why that was not a consideration or mentioned in the article. I lived on Main Street several years ago and just pulling my car out on Main Street from the alley we lived on, always made me uncomfortable bc folks were driving so fast. Hahns truck drivers use to be some of the fastest drivers, which is more concerning, considering their weight and size. Speed, carelessness, selfishness, and impatience follows materialism, loss of human kindness and consideration, and unhealthy attitudes. We should drive like we are carrying precious cargo in our car, because we are. We need to slow down in all aspects of life, not just cars. We need not wait for preventable tragedy to strike before reevaluating what really matters in life - which IS the miracle of life, love, family, and friends.

Most company drivers stay within the speed limits, because they don't want a mark on their license - it is their livelihood, and they are paid by the hour. So, speeding is not in their best interest.

I think if it were my decision, I had rather have a speed camera or more than an expensive "speed bump" or "speed table." Let the crooks pay. There are rules for where the cameras can go. But they make money.

They do, Gary, but they too are not perfect. Not perfect because the driver trying to stay within the speed limit will not usually be able to set the cruise control at 25 and most cameras are set to go off at 5 mph over the speed limit.

With a posted speed of 25 mph, in Maryland the camera will not go off unless you are doing greater than 36 mph.

Better not try that in MOCO.

Dick, I don't know where you got a ticket in MoCo using a speed camera to document your speeding, but if you did and you were going 11 mph or less over the posted limit, you should fight it.

"Not perfect" and you are right. But considering the state we are in now, I will settle for 'good enough." I had rather fine those who are impaired or otherwise without any regard for speed limits.

On that type of road, specifically, I think speed bumps/humps might be prohibited due to use by emergency vehicles.