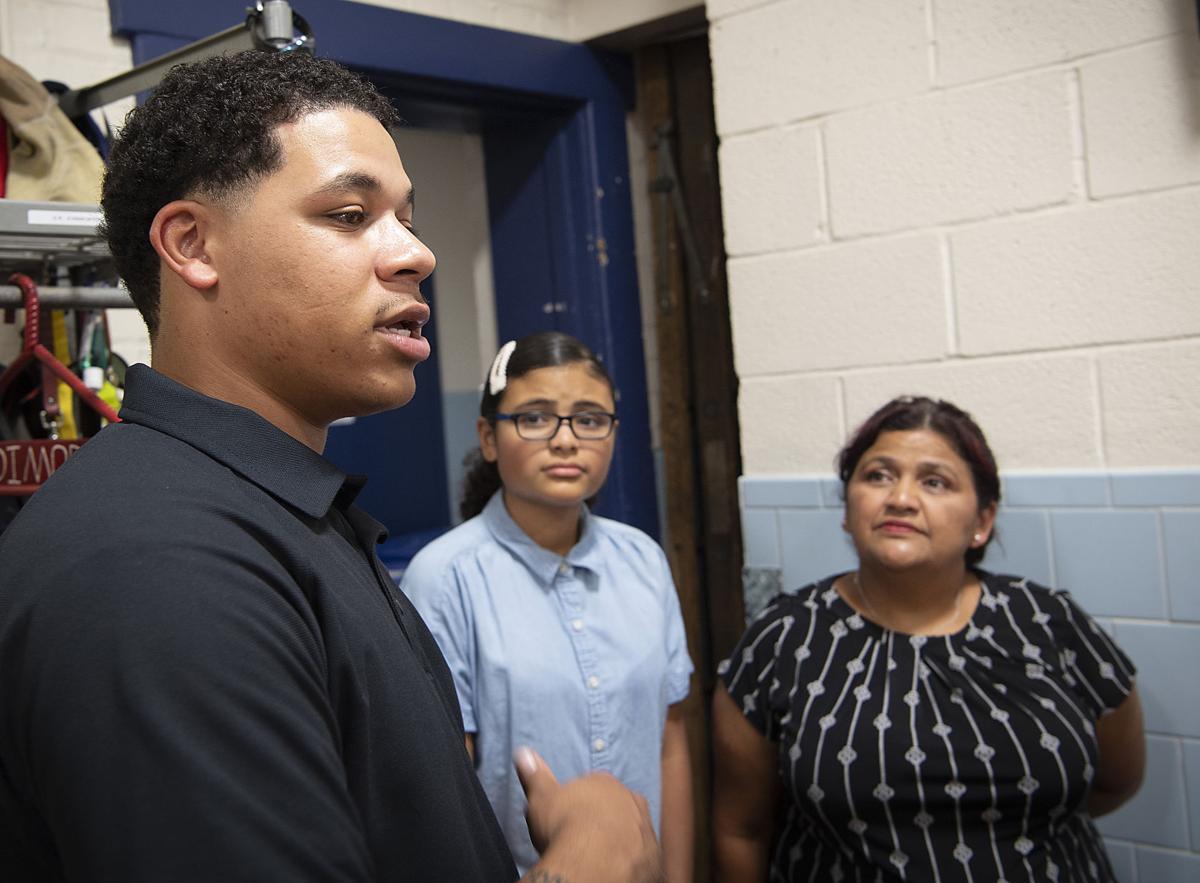 Maria Rodriguez and her daughter Mildred Cubias, 13, were reunited Tuesday with I Believe in Me mentor Jamontrez “Monte” Williams, a 22-year-old volunteer firefighter with Junior Fire Company. Williams was with the family at a pool party in June when he noticed Mildred in the deep end of the water, failing to resurface. Williams jumped in and pulled the 13-year-old out of the water. She had a pulse but was not breathing, so he began CPR. 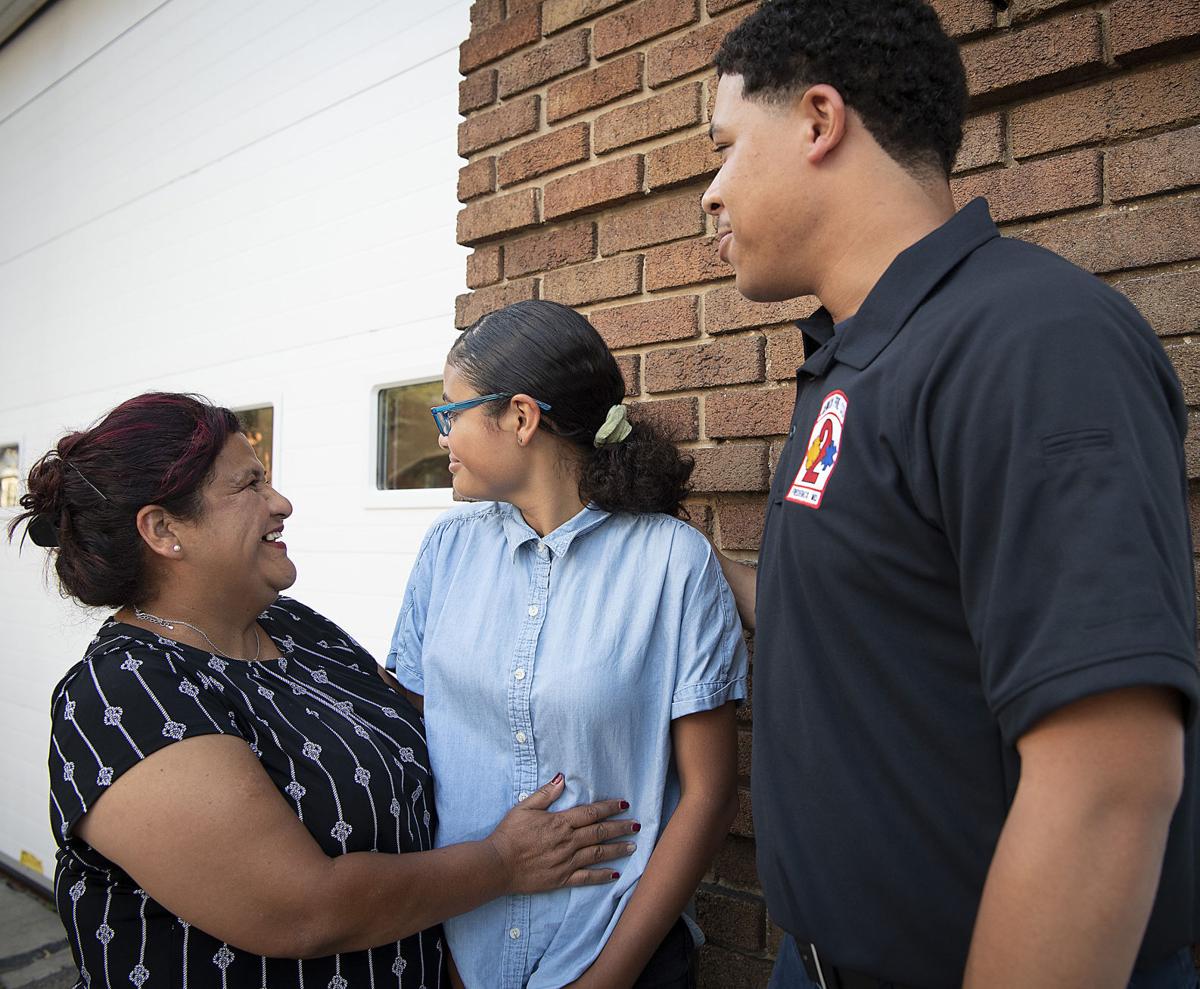 Maria Rodriguez and her daughter Mildred Cubias, 13, were reunited Tuesday with I Believe in Me mentor Jamontrez “Monte” Williams, a 22-year-old volunteer firefighter with Junior Fire Company.

On a hot day in June, community members who’d spent the past 15 months distributing food to locals in need gathered at a volunteer’s house to celebrate their accomplishments.

Local nonprofit I Believe in Me had devoted much of its time and resources to keeping the Frederick community fed during the worst of the COVID-19 pandemic, and the weekly food drops were coming to a close. I Believe in Me mentor Jamontrez “Monte” Williams, a 22-year-old volunteer firefighter with Junior Fire Co. in Frederick, was among those gathered at the cookout.

Williams and I Believe in Me board member Brad Young, who’d hosted the party, were chatting by the pool when they noticed a distressed Fredy Cubias, 14, who spotted his younger sister Mildred Cubias in the deep end of the water, failing to resurface.

“I just so happened to look at the bottom of the pool, and here’s this young girl down there,” Williams said in an interview. She looked “lifeless,” he recalled.

Williams jumped in and pulled the 13-year-old out of the water. She had a pulse but was not breathing.

“I don't want to make it all about me … I'm very blessed and very humbled to be in the position that I'm in right now. I love giving back to this very community that I used to take from.” — Jamontrez “Monte” Williams

Williams, who’d recently completed his emergency medical technician training, started CPR. Young thinks it maybe lasted a minute, all while I Believe in Me volunteers encouraged Williams to keep going.

Mildred came around, and Williams placed her on her side in the “recovery position” to keep her airway open.

“I believe Monte was in the right place at the right time,” Young, who is also a member of the Frederick County Board of Education, said.

Before long, emergency units from Walkersville responded and rushed Mildred away to a helicopter. She spent five days in the intensive care unit at Johns Hopkins, making a full physical recovery, according to Mildred’s mother, Maria Rodriguez.

Looking back, Williams is quick to say others would have done the same for Mildred, he just happened to react first.

“I don’t want to make it all about me … I’m very blessed and very humbled to be in the position that I’m in right now,” Williams told the News-Post recently. “I love giving back to this very community that I used to take from.”

Williams served a 19-month sentence in the Frederick County Adult Detention Center after being involved in a non-injury shooting in 2017. He regrets that day, saying he acted out of ignorance.

While serving his time, Williams met I Believe in Me founder Aje Hill, who’d come looking for people willing to speak in the youthful offender program. The way Hill and Williams tell it, I Believe in Me helped spark a new chapter in Williams’ life, one in which he strives to do right by his community.

“His change has been epic,” Hill said.

An emotional reunionAlmost exactly one month after the pool rescue, Williams reunited on Tuesday with Mildred’s family at Junior Fire Company. In front of TV cameras and well-wishers, officials from the volunteer company and Frederick County Division of Fire and Rescue Services presented Williams with a certificate of recognition. It’s Williams’ hope to become a paid firefighter one day.

The family kept in touch with Williams over video chat while Mildred was in recovery, but they hadn’t seen each other in-person since the near-drowning.

“She knows Monte is the guardian angel that got put in our lives,” Joselyn Cubias said, translating from Spanish for her mother.

“My heart is still living in the moment” that Williams promised her Mildred would be OK, Rodriguez wrote to the News-Post. She couldn’t move when she thought her daughter was gone forever.

Rodriguez and her children came to know Williams through their volunteer work with I Believe in Me. At the party, before the incident, Rodriguez urged Williams to stay longer when he thought about leaving. She wanted to spend more time with him, knowing she would miss seeing him regularly through the food drops.

Even before the rescue, Rodriguez felt like they were family, she said.

On Tuesday, Rodriguez’s voice cracked and tears welled in her eyes when she thought about what might have happened to her daughter if Williams left the party early.

It’s difficult for Mildred, as well, to talk about that day.

As the small crowd at the fire station dissipated, Williams offered a few reassuring words to Mildred, and spoke highly of her work with the nonprofit. Their conversation changed to school, the future, and hopefully, better days to come. Mildred and Williams exchanged soft smiles as they realized he once went to the same school she now attends.

There’s only so many ways one can say thank you, Joselyn Cubias said, but if there’s one word to describe Williams, it’s hero.

“We’re just grateful, thankful,” she said. “He’s basically her hero and ours as well.”

Jamontrez Williams walks around the white folding tables in the basement of Asbury United Methodist Church and greets some of his favorite people.

Every child needs to be taught how to swim.

And a thank you to Mr. Hill for starting that great organization.

Wow! Great job by all involved for your volunteer work for this community, and a great job by a young man in reacting quickly and properly to save a life.

What an inspirational story!